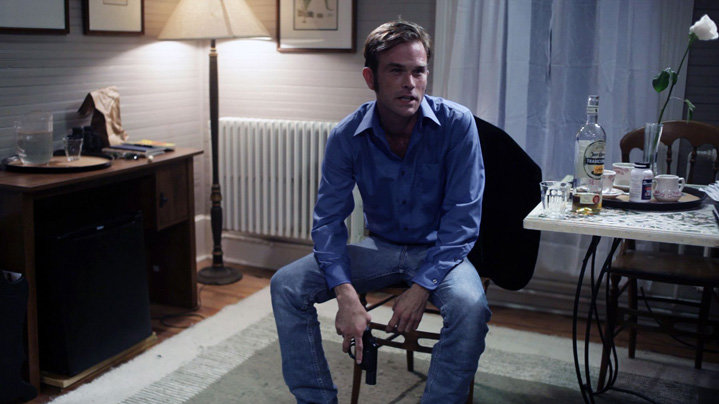 Monte Hellman's best films begin by pretending to tell a story. Take your pick: Ride in the Whirlwind, Two-Lane Blacktop, Cockfighter, Iguana—every of them establishes a good punchy premise (often aided by a startling opening shot or scene) and then, without ever fully abandoning "plot," inches towards an earthy, unshowy, existential bleakness with each scene. In an odd (and ironic) interplay of inertia and impermanence, his frequently stubborn characters become metaphors while their all-consuming goals fade away into the landscape. Road to Nowhere ups the ante by pretending to tell several stories at once: one about the production of a film (also called Road to Nowhere), another about the crime the film is based on, and a third involving a mysterious video-recorded conversation between the film's director and the blogger whose reporting formed the basis for the film. However, the various strands, which are intentionally not differentiated, don't form a "cohesive" (in the traditional sense) whole. These jigsaw pieces don't fit together.

But Road to Nowhere isn't some measly brainteaser. Rather, like Abel Ferrara's somewhat-similar Mary (and, to a lesser extent, Dangerous Game), its internal contradictions delineate a world in flux. Hellman has always been fond of characters who are equal parts hard-headed and mercurial (see GTO in Two-Lane Blacktop and Oberlus in Iguana), but the identities of most of the characters in Road to Nowhere are so shifty and self-contradicting that their specific details—background, motivation, etc.—become irrelevant. All that remains is the drive shared by all of the film's major characters (Tygh Runyan's director, Shannyn Sossamon's ingénue, Dominique Swain's self-styled investigator, Waylon Payne's opportunist): to take control.

For all its poker-faced grimness, Road to Nowhere is essentially an agnostic farce about a group of people trying to control a narrative they believe themselves to be taking part in, but which probably doesn't exist; not quite "Six Characters in Search of an Author," but at the very least "Four Characters Attempting to Become the Author." The effect is even stronger because nearly every scene creates the illusion of a private life; the film is composed almost entirely of episodes that hone in on moments of vulnerable, furtive activity: a couple watching films together a hotel room, a man spying on his lover, characters sneaking around or discussing secret plans, an actress getting ready to meet a prospective director, actors rehearsing a scene away from the crew. But those "private lives" all prove to be either misleading or conscious put-ons: the characters are trying to invent motivations for themselves. A film whose every shift in tone and perspective reveals that it isn't trying to "tell a story" ends up being about how people invent stories for themselves, making it all the more obvious that, with their resigned looks and sighs, the characters in its final scene are playing up the tragedy of their situation in order to justify it for themselves.