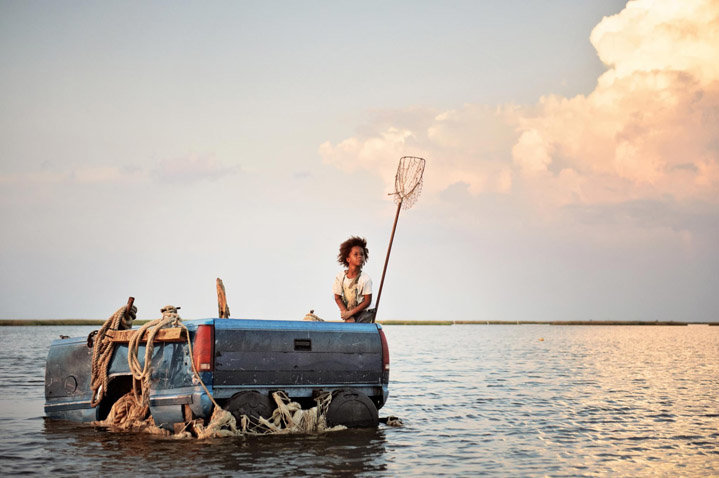 Benh Zeitlin's faux-naif debut feature Beasts of the Southern Wild trades in quasi-folkloric whimsy, fantastical contraptions, and a very slick and deliberate sort of visual roughness. ﻿Shot and cut like one of Weiden + Kennedy's pseudo-populist Levi's ads (with several apparent borrowings from a 2009 commercial directed for the firm by Cary Fukunaga, who worked on Zeitlin's short Glory at Sea the year before), ﻿it looks and moves like an ad agency creative's idea of an American fairy tale. It's not without its pleasures: a uniformly strong cast of non-professionals, clever Emir Kusturica-aping production design, a pretty good scene set in a waterfront brothel, and a damn fine opening title card. (Also, on a more basic level, I appreciate Zeitlin's apparent fetish for women's thighs.) Still, the language Beasts of the Southern Wild speaks isn't really the language of cinema—﻿﻿﻿it's the language of cinema as it's been co-opted by smart, arty advertising in the last two decades, and the film's damning central flaw has to do with what exactly Zeitlin and his associates are trying to sell.

Beasts is set in the Bathtub, a fictional, cutesy-poo impoverished rural community in Louisiana, and is told mostly from the perspective of Hushpuppy (Quvenzhané Wallis﻿), a six-year old who lives under the extremely lax supervision of her irritable, alcoholic father Wink (Dwight Henry). Hushpuppy also narrates the film, an effect that's meant to recall Linda Manz﻿'s voice-over in Days of Heaven but more often than not recalls Kids Say the Darnedest Things. Over the course of the film, the Bathtub gets flooded in a cataclysmic storm that resembles Hurricane Katrina (but isn't Hurricane Katrina), and the community's holdouts—﻿﻿﻿﻿﻿including Hushpuppy and Wink, who is dying of some vague illness—are forcibly evacuated ﻿﻿﻿﻿﻿﻿by government aid workers.

This is the big reveal, where Beasts  of the Southern Wild finally unveils its central theme / product, complete with slogan ("I gotta take care of mine"). The people of the Bathtub don't need outside help; their community is enough for them to get by. (Note: Beasts provides absolutely no sense of the Bathtub as a functioning community; all we learn is that its residents enjoy fireworks and getting drunk.) They march triumphantly together to the sound of Zeitlin and Dan Romer's cloying, grating indie score.

Here is that old American self-sufficiency, that "freedom to be free" and live your own way nonsense that it also hawked by the Levi's ads the film so often resembles ("Go Work," the commercials say—﻿though not at Levi's, of course, since the company moved all of its manufacturing to cheaper, less-regulated places two decades ago). The problem is that the Bathtub and its people—﻿﻿every one of them well-acted but underwritten—﻿﻿are not self-sufficient; the only right they gain by heroically refusing outside assistance is the right to be poor. (Note: Zeitlin is not poor.)

Beasts of the Southern Wild is selling a fantasy, though it's not a fantasy about a little girl who cooks her dinners with a blowtorch or about magical alligator meat or friendly tugboat captains who collect fried chicken wrappers or prehistoric creatures emerging from Arctic ice. It's a fantasy of Hurricane Katrina—﻿﻿﻿the imagery of which Beasts appropriates whenever it's convenient—﻿﻿﻿as a natural disaster that brought out the best in people, rather than a man-made catastrophe that revealed the worst aspects of a society. Ironically, the film's FEMA stand-ins seem to be reasonably good at their jobs; it's the Bathtub's residents' decision to weather the storm and then later to return without aid. Beasts pretends to be celebrating gumption and resolve, but what it's ultimately selling is stubbornness and isolationism. ﻿There is a word for films like this: bullshit.

Beasts of the Southern Wild