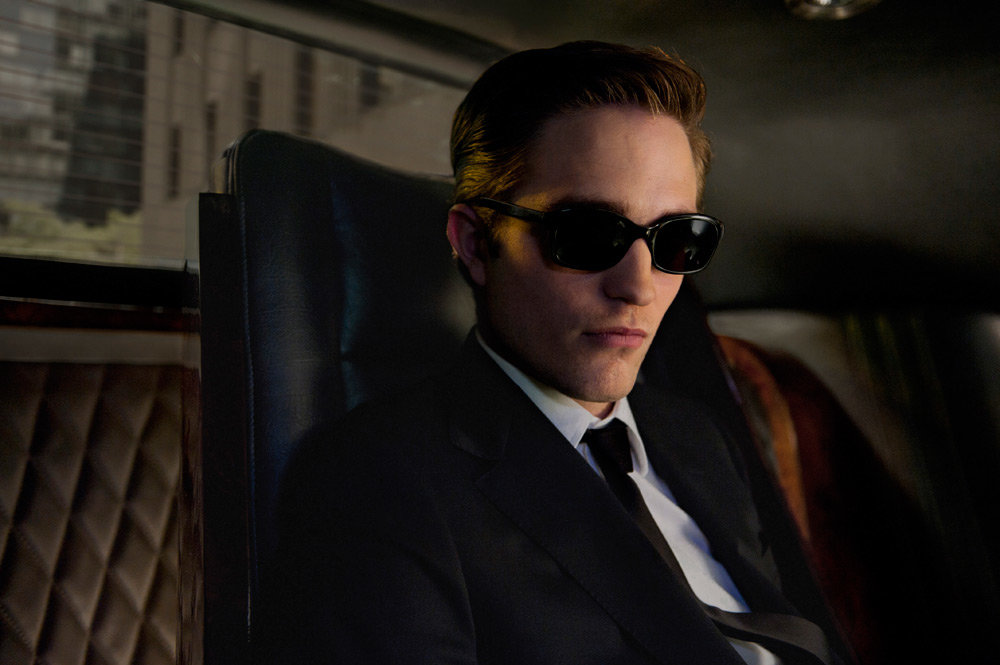 Continuing along a line introduced in last year's A Dangerous Method, David Cronenberg pushes his cinema towards a talky abstraction in his uncanny, perversely funny and frighteningly insular adaptation of Don DeLillo, Cosmopolis. Cronenberg's film was the supreme oddity of the Cannes competition, where it had its world premiere: a millennial-9/11-OWS exegesis restraining itself to spare, highly stylized dialogs between a limousine﻿'s sole passenger—Robert Pattinson, playing a newly married techno-capitalist billionaire and introduced like Mabuse sitting in his car's techno throne—and a series of employees, fucks and family as the car travels at a snail's pace through Manhattan so that he may obtain, arbitrarily, a haircut across town.

Except, it's clearly not Manhattan—soundproofed to near silence from street noise, cruising so slowly as to produce no bumps in the ride, the back projection behind the windows both artificial and probably not of New York (joining the Resnais and Ruiz to make Cannes 2012 an excellent example of ingenious digital artificiality), these remove almost all semblance to even a partially realistic mise-en-scène. Within this vacuum, the episodic dialogs, each introduced with hard jump-cuts, are all the more honed, isolated, eery and confrontational.

A friend's remark before the Cannes screening that he heard the film was austere called to my mind Straub-Huillet, a reference I thought silly until I saw how Cronenberg, who adapted DeLillo's book himself, put in the forefront of his film words and their delivery—words icy and flush with political import. The subjects of the talks, as well as the mise-en-scène in general, principally dances around the severe abstraction late capitalism has introduced into life—or, at least, into the life of a very rich man, where numbers and screens, his head of security's warnings about threats to his life, and, ultimately, the unrest that percolates through New York as the film goes on, all remains at a distant, intangible remove. The world is reduced to virtual communication and personal relationships to theory, each talk or fuck an intellectual negotiation for the purpose of cerebral play.

One of the film's most magical moments is towards the beginning: Just when we've started to get used to the subtle artificiality of the car ride and the flatness of the “world” outside it, a beautiful blonde woman is seen in the backseat of a cab that pulls up next to the limo. She grabs Pattinson's attention and he immediately opens his car door and enters the cab's—almost as if nonchalantly, unthinkingly, he is able to penetrate a cinema screen, or a fantasy, or, indeed, move from one fantasy to another, from car to car, diner to diner, bedroom to bedroom. These flashes of the fantastic come often—most memorably in the passing funeral for a black religious singer whose procession's path crosses that of the limo, causing Pattinson to weep in grief—yet much of the character of the dialog throughout  seems ﻿trite. Superficially these talks seem about the harsh malaise of a rich man seeking unusual pleasures—a prostate exam in the backseat of his moving car while he talks with a female employee nearly brings them both to orgasm; earlier, he insists that Juliet Binoche buy the Rothko Chapel to put in his apartment. This forward superficiality of the script calls to mind the standard surface level of A Dangerous Method's non-surprising-surprise that its bourgeois analyst hero has perverse desires below the surface.

I understand that complaint against Cronenberg's 2011 film, but I also think that this thin surface was just the language the film used (or its milieu had to use) to get at something more sinister and nuanced underneath, debating attitudes towards psychoanalysis to theorize, body and mind, one's thinking and interaction in the world. From science, “real” conventions are created to identify, rationalize and cure all the strangenesses and horror within people, a step beyond the social restraint of public Victorian values, “confirming” them with scientific-materialism to explain and contain anything that might be out of place and perverse in the world.

Cosmopolis follows this technique but ditches the previous film's utilization of mainstream genre conventions—period piece, biopic, demure restraint of drama. Instead, this weird urban voyage provokes an utter sense of deadened unreality, a consistent, minor key cynicism, desperation and pessimism pushed beyond normal dramaturgical development and instead popping out at us, like sculptures, like 3D, forceful, frank and, in the content of each speech, each interaction, confounding in this dual speaking. If you have a strange sensation while watching Cosmopolis, a dreadful remove, it's because you are experiencing the end of the world as theory.﻿