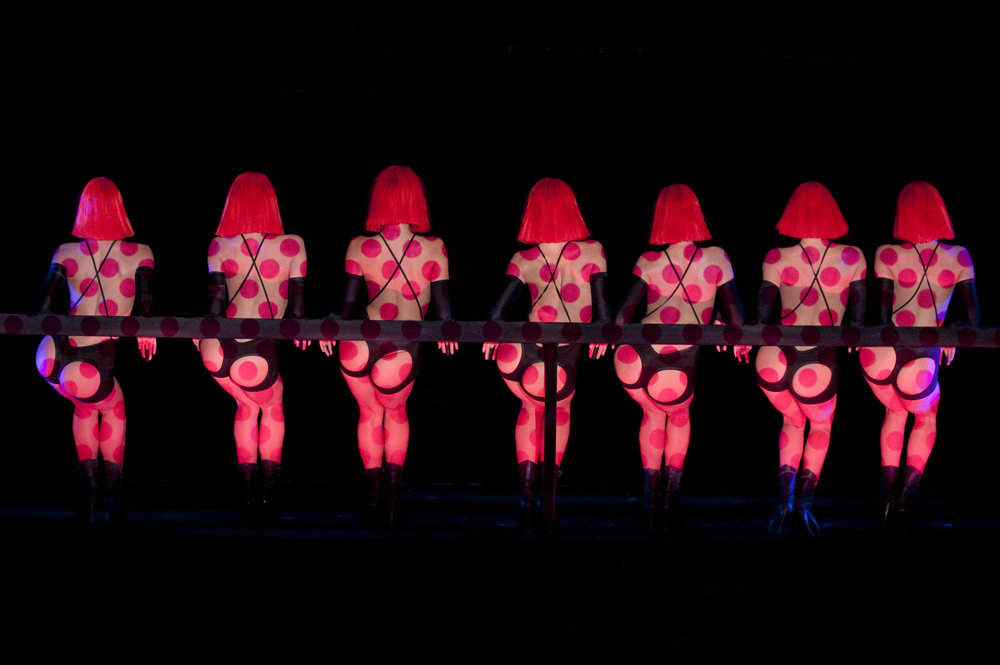 Black box shadow play and dubbed orgasmic moaning­—Frederick Wiseman's documentary on the Crazy Horse cabaret﻿ in Paris sets its world rules from the start: the presentation of stagecraft fantasy. Outside, like the B-roll opening to Woody Allen's Midnight in Paris, is a Paris-as-usual, and surprisingly dull. Plunge down the twinkling club stairs, though, and enter another space entirely. To face the stage is to see an entirely new world; yet sly reverse shots are either to lashishly tacky, empty red velvet booths or on-lookers made up not of perverts or sleezy high rollers but everyday people—an audience. The directors are there too, of course—the nude revue is surely directed, directed like a Maurice Binder 007 title sequence, impeccable female forms double-swathed in opulent costuming and stained-glass lighting schemes. The show is Crazy Horse's subject, while its creation through the choreography of the women, and backstage talks amongst the creators and the administration remains opaque, generic and disinterested. We see full routines in their vacuum-isolated majesty—the more conceptual and costumed group acts—and their awkwardness—the solo shows—and it is like watching cinema: we know it's all real and we know its all fantasy and we know neither how such an alchemy is made, despite "showing" us how, nor how it really affects those watching, despite hearing their explanations. Thus the mystery of the empty seats; perhaps the show would go on even without a spectator.

Having just watched Mizoguchi's A Geisha, I was struck by a similar structuring device, deliniation of spaces, of thoughtfulness and talkativeness﻿: the women concentrating on appearance-performance, the men on business-logistics. Yet here we have no insight into the actresses, it is the organizing men and bosses who get the words, and get the words in situations like board room meetings and press interviews where the words most easily become another performance, a performance about explaining ideal creativity, femininity, eroticism, art. The women meanwhile are assembling, nurturing, polishing, and dancing—adjusting small elements of their bodies and costuming, tweaking the details of future mise-en-scène, each an argument unto itself. You enter this black space and everything is stage managed; even the behind-the-scenes rehearsals and auditions have a singularly odd sense of self-sufficiency, existing as their own rituals of half-enacted fantasy, pushing and pulling realism of bodies with abstract aesthetic ideals of eroticism inside a black hole. A world permanently inside and underground, filled with nooks and booths, with no interiority or depth, only surfaces that reflect or, like a black hole, camera lens, eye ball, absorb all light.﻿