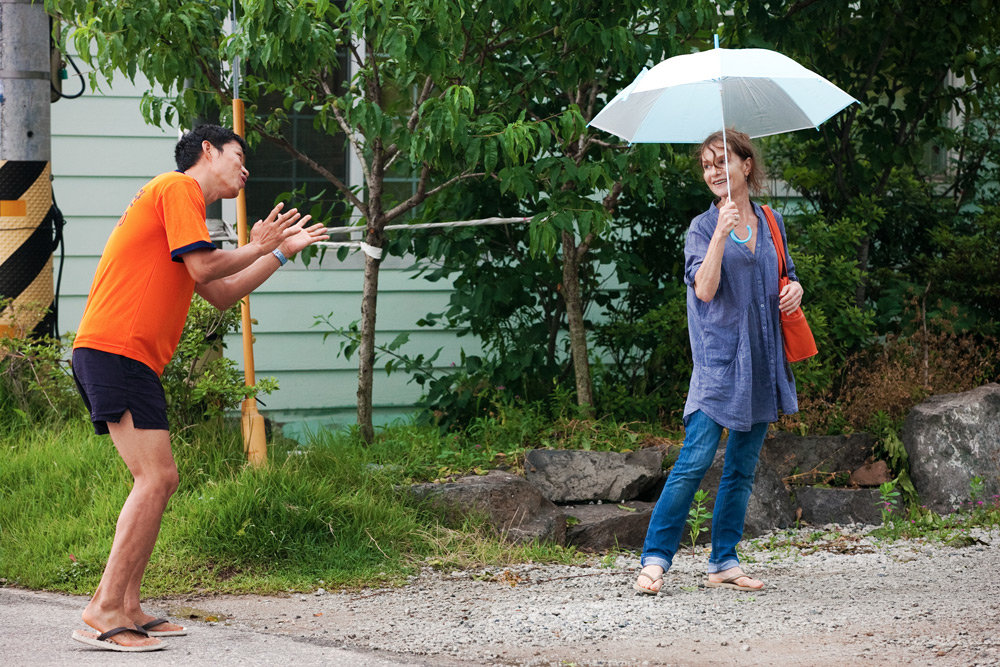 Contre the majority of premieres at Cannes this year—prestigious, important, calculated—are films like Apichatpong's Mekong Hotel and, in competition, Hong Sang-soo's In Another Country: modest, lo-fi, open works made congenially with small groups of friends and collaborators in short periods of time, asking nothing more than that the people on camera engage in interesting—and often unexpected—ways with their material. For these movies, the pleasures come organically with this direct yet casual, almost intimate or private kind of interaction, a complicity between performers and the camera. They are open invitations.

After the more considered, poised and tender The Day He Arrives, Hong's latest seems spontaneous, looser and more wandering, taking on the form and feeling of its heroine's uneasy, limbo-like state. Opening with a framing device whose plot is never returned to, In Another Country is the visualization of a young female filmmaker's idle screenplay ideas, written while she herself is waiting in limbo at the small seaside town of Mohjang having run away with her mother from their debts. The ideas are all centered around a visiting female foreigner, played by Isabelle Huppert, who in each story finds herself in Mohjang and interacts with a mostly recurring cast of locals and fellow visitors. In the first story, she is a filmmaker who is being courted by a married Korean colleague; in the second, she is the one married and travels to Mohjang to wait for her Korean lover to arrive; and in the final story she is visiting the town to try to forget her failed marriage. Throughout, she navigates a series of very funny and very awkward semi-fluent conversations, not so much full of misunderstandings as askew communications filled with halting intentions and unexpected results.

Like all Hong heroes, Huppert's character is a social flaneur who, whether she knows it or not, searches for guidance in others, the world around her and ultimately in herself in order to find a response, an intentional act taken in conscious responsibility. This act tends to signal to them a new step or path in life. Unlike The Day He Arrives' attention to creating an aesthetic atmosphere, In Another Country is mostly interested in the tone of communication—friendly but awkward, flirty, frustrated, limited but telling—in English between Huppert and the Korean cast, as well as the reaction of the Koreans to the appearance of a beautiful, single female foreigner. It is by continually stumbling around these exchanges, getting flustered or getting pleasure from them, that Huppert tests the world around her and herself. The highlight are the exchanges between the actress and Yun Junsang as the brash, handsome, barely fluent lifeguard of the town, part guiding post that shows up in all three stories and part sex interest, whose exaggerated, forward friendliness nearly moves the film unexpectedly towards farce.

Befitting the riff-like idea of these sketches as well as the film's own nonchalant spontaneity, as if shot over a weekend whenever it wasn't poring rain, the place, situations and structural ideas here are subservient to a greater emphasis on ungainly on-camera interactions. This is a common enough trait in Hong's work but here the focus, creating a casual portrait of the possibilities engendered through the interaction between Hong's script and the bumpy, variable chemistry within the cast. Ultimately, Huppert's character is moved by the tenor of this funny, ill-fitting mix, especially in the successfully unconvincing middle episode, where she is meeting her similarly aged Korean lover—the discomfit produced by the slightly out of sync drama becomes the subject and an awkward pleasure in its modest self-reflexivity. The on-camera problems become problems of the characters, the source of its comedy and its melancholy; it's no surprise then that this section is rife with dream sequences, as if even the woman's dreams in a foreign country falter and only sometimes flow smoothly, “naturally.”

The nature of the one character shown three different ways—or, put another way, three different characters shown one way—gives the woman and the film a feeling of introspective freedom, an atmosphere of being inadvertently out of place, and therefore always casually searching for the place to be. The Hong structuralism—events repeating with variations, characters re-appearing to challenge the hero in different ways—seems less imposed by the filmmaker and more a product of the French woman's unconscious look for a catching impression in the world upon which to act, a world shifting under her feet—or in her head. The serenity of the ending is very beautiful and suggests a spur of the moment decision taken, stumbling (literally, drunk) on one particular, ambling path, which may not be a solution to her life, but, for this moment, in this version of her life, is something that rings true and good.﻿