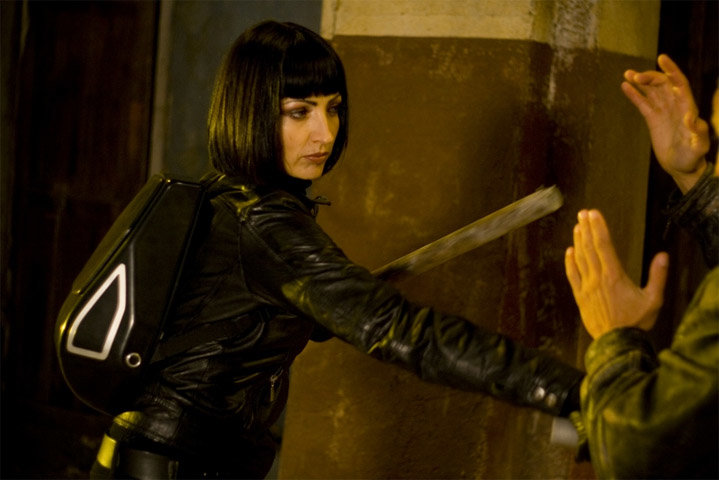 It's a pity that Assassin's Bullet, possibly the first Isaac Florentine film to receive a Stateside theatrical release, happens to be one of his weakest. A martial-artist-turned-filmmaker, Florentine (born Yitzhak Florentin﻿) has carved out a niche ﻿in the direct-to-video world as an old-school action director with a knack for choreographing and composing fight scenes. Wide-angles lenses, longish shot durations (by contemporary standards, anyway), and a sense of follow-through are the hallmarks of Florentine's action-directing style—﻿﻿an appreciative aesthetic where every element serves the bodies and movements of the athlete-performers (Florentine's leads are more often than not MMA fighters, more than capable of doing their own stunts).

Originally titled Sofia (as in the city), Assassin's Bullet is a sub-De Palma riff on the Bulgarian capital's status as a popular B-movie shooting location. This identity disorder—﻿﻿Sofia is one of contemporary cinema's most filmed cities, yet rarely plays itself—﻿﻿﻿ is personified by the lead character (Elika Portnoy﻿), a Bulgarian woman with multiple personalities, each one belonging to a different genre: a bespectacled, blonde educator with a controlling husband (domestic drama﻿), a redheaded belly dancer (romance à la﻿ Zalman King), and jet-black-haired professional assassin (thriller).

Christian Slater plays an American cultural attaché﻿, a former FBI agent with a boilerplate backstory. He's a sort of audience surrogate, crossing paths with all three personalities: with the educator as a colleague, with the bellydancer as a suitor, and with the assassin as an investigator. It doesn't take a genius to figure out that all three Portnoys are the same person—﻿﻿the actress has a easy-to-recognize face, with a ﻿﻿distinctively large nose and a prominent mole above her right brow—﻿﻿so, for the purposes of the plot, Slater has to be a complete idiot. Also in the mix are a British psychotherapist (Timothy Spall, hair combed over into a news anchor 'do)﻿ and the American ambassador (Donald Sutherland, whose Canadian accent would probably go unnoticed if the script didn't have his saying the word "about" every other sentence).

While Florentine and his longtime cinematographer, Ross W. Clarkson, manage to get a few '90s Hollywood-flavored Steadicam shots in, much of the movie is composed in an anemic, impersonal style that more closely resembles Florentine's past career as a regular director on various Power Rangers TV shows than the low-budget craft of Ninja (2009) or Undisputed III: Redemption (2010). ﻿Whatever charm the movie has comes mostly from its intermittent lapses into Z-grade filmmaking: a videotape bursting into flames after being tossed into a pot of boiling water, redundant explanatory titles, numerous interminable slow zooms into Portnoy's expressionless face. Only a subplot involving a pair of crooked local cops and the two brief, vigorous action scenes—﻿﻿shot largely with the camera following the assassin Portnoy from behind, her black wig in the center of the frame﻿—﻿﻿﻿give a glimpse of what Florentine is capable of.

Florentine is an action-oriented director; at his best, he does what certain Ringo Lam, Tsui Hark and John Woo movies do, transforming characters into ﻿﻿﻿bodies in motion, hurtling at each other through space. Assassin's Bullet, however, is a talky, action-less film﻿—﻿﻿﻿﻿all hypnotherapy, bar chatter, and cafe conversations. It all comes down to a problem of subject and material.

The casting only exacerbates the problem. Florentine's style plays well with precise physical performers like Scott Adkins, Michael Jai White, and Jean-Claude Van Damme; aside from a few nervous tics, Slater isn't much of a physical presence—﻿﻿he acts with his voice and ﻿face, not with his body—﻿﻿and Portnoy, who spends a good chunk of movie staring off blankly into space, doesn't exactly pick up the slack. ﻿

It's a shame that one of contemporary action cinema's most consistently interesting (and entertaining) directors has to make his US theatrical debut with a movie that often feels lifeless and dull. Not to worry, though—﻿﻿the prolific Florentine already has three films slated for next year, and at least one of those is bound to be very good. ﻿﻿﻿