“We no longer exist as playwrights or actors but as terminals of multiple networks […] passive spectators of an empty scene where nothing takes place and which nonetheless fills our vision.”
—Jean Baudrillard (The Ecstasy of Communication, 1987)

The human geography of Jim Jarmusch’s cinema has always been one of the most cosmopolitan American cinema could ever afford. Long before the budget of his productions allowed him to cross the Atlantic his curiosity brought him closer to the foreign streams that formed his country and away from its paradoxical provincialism. Allie in Permanent Vacation (1980) wanting to move to Paris (only to meet, at the end of the film, his Parisian equivalent wanting to move to New York…), Willie’s Hungarian cousin in Stranger Than Paradise (1984), the bizarre Italian in Down By Law (1986), the Japanese couple, the Brit and the Italian woman in Mystery Train (1989), and so on; his cinema is densely populated by immigrants. Jarmusch rescued from the conforming clamps of America its very essence, that of a mix-race child somehow ashamed of its “impurity,” hence determined to affirm its alleged superiority with arrogance. It is precisely at the plastic presumption of American cinema that Jarmusch films have been quietly eating away over the years. He found the beauty of a vast country in its smallest details, in its marginal characters, even when visiting the birthplace of myths and legends (Mystery Train). The success Jarmusch found in Europe was never intended or sought-after but merely consequential, for he managed to observe and film his own country with the eyes of a foreigner. Instead of canonizing its supposed, idyllic perfection, he dissected its fascinating imperfections with unsentimental care. He lingered pensivily on the remote corners of American iconography and looked at icons as fellow humans, not deities. 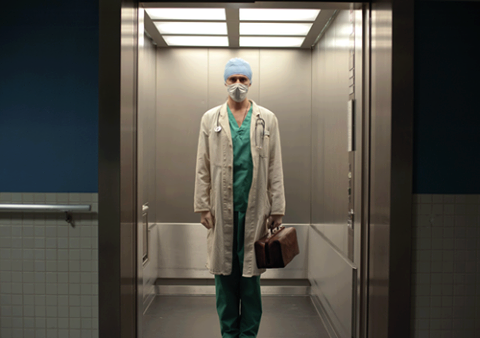 Already marginal to begin with, Jarmusch's visions, albeit having gained respectability in the art film industry, have drifted even further from the competitive anxiety that characterizes every aspect of contemporary culture. There is a laconic, though possibly not entirely intentional, autobiographical identification with the characters in his newest film. The cool (as in cold rather than trendy) vampires of Only Lovers Left Alive are cultural creatures unfit for the present time and day(light) they in fact carefully avoid. They inhabit a dormant nightlife unable to relate to what's boiling under the flashlights aimed at celebrities and the void they tentatively conceal. They rely on fresh blood for survival but seem to live exclusively off their memories; they are virtually dead because there is no room for them in the present. Their anachronism is all the more evident when compared to the compulsive need to see and be seen that pervades the world they no longer belong to. Jarmusch’s vampires, very much like the director himself, come from a time when the gutters of popular culture were the “cool” place to be. The young music impresario that provides Adam (Tom Hiddleston), the Detroit musician-vampire, with anything he needs cannot conceive why such a famed artist would shrink from the limelight. Being an outsider is no longer fashionable, it's a thing of the past. Is uninterested love too a thing of the past? Can we still love anyone other than our self-involved selves? Adam and Eve (Tilda Swinton), the Tangiers vampire, have been in love for centuries, although one presumes with generous breaks in between (one lives in Detroit, the other in Tangiers when they decide to meet up after years). Bored with their respective lives and their daily blood-hunt, they will meet in Detroit, the late eden of 20th century industrialization.

As usual in Jarmusch's films, the characters and their studies constitute the backbone of the film; their emotional tonality and the rich tapestry of their stylistic presence are narrative universes in themselves. Overburdened by centuries of history and culture, Adam and Eve are more indolent (and very likable) snobs than elderly sages. Everything they are surrounded by bores them or leaves them untouched at best, yet they still refuse to go, clinging on memory, chasing the figurative ghosts of a civilization that once was. No choice of setting could be more eloquent than Detroit in this regard. The one place on earth that incarnated the euphoric splendor of capitalism and now holds up an unflattering mirror to its grotesque “miscalculations.” There, where Henry Ford engineered the modern times, swallowing up Charlie Chaplin and his sentimentality, a theatre was built. It was the strategic shift from manufacturing to spectacle; the same techniques of the assembly line were adopted in the music industry, the soul, flesh and genius of negroes subsumed by Motown. Capitalism the vampire, culture its predestined victim. The flames of race riots and the militant proto-punk of MC5 had warned Amerikkka that empires are always followed by ruins…but the dream was too beautiful to wake up, and so the theatre now lays abandoned, an improvised parking lot that Adam and Eve pay visit to like an apocryphal cathedral. Like the culture they fed on for centuries, simultaneously “holy” and grandiose but also parasitic and bent, Adam and Eve are glamorous and useless characters, wallowing in their own hip irrelevance. But there is an elegance to them that is undeniable, rendered all the more palpable by Jarmusch’s look: aloof, passionately detached and antiquatedly youthful. 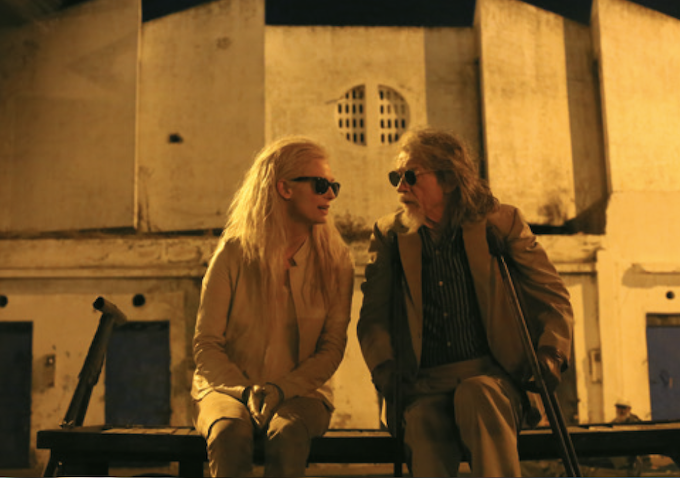 The way Jarmusch and his characters nonchalantly wear their costumes and live their literary references is clearly pre-digital, you can see cultural sediments deposited on their lives, the scars of musical romances having marked their whole existence, not just one fleeting afternoon on YouTube. But the world around them has forever changed; it is endgame (Eve brings a copy of Beckett’s eponymous play with her to Detroit) and only zombies and vampires are left, more or less, alive. And if zombies are the faceless masses, vampires are the aristocracy of the undead, the counts that count, so to speak. In Only Lovers Left Alive, the zombies, unlike the insurgent Romeroian specimen, pander to the vampires’ antiquarian whims, accommodate their every fetishist tantrum, worshipping them. In a world deprived of dialectics and generational clashes, where the youths no longer reject but aspire to the establishment, eternity becomes unbearable even for vampires. The unfolding of history is lost in an endless present, caught in a desert of values where anything is allowed as long as it is profitable and meaningless. But ours are late romantic creatures, their amorous search for authenticity will bring them back to Tangiers, Morocco, where in the meantime the elder vampire and Shakespeare’s ghost-writer, Marlowe (John Hurt), has died. There, where the media landscape has not yet replaced reality, Adam and Eve will find new lifeblood in the passion of a young couple after having witnessed the ancestral ritual of music without business. Will they bleed them to death too?