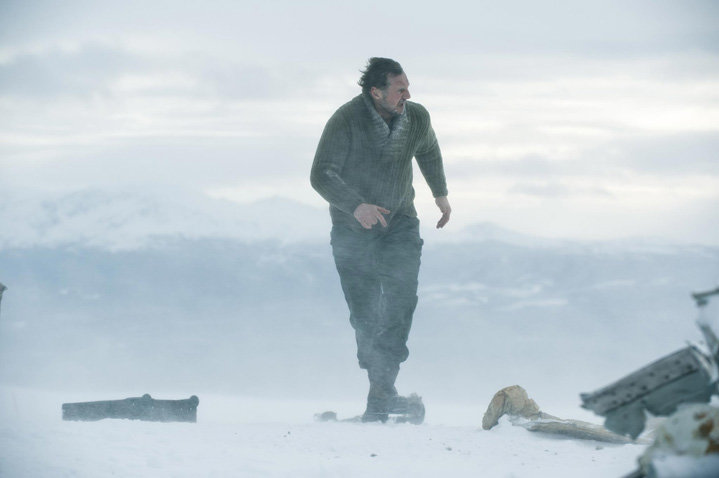 “﻿When we speak of 'seriousness' in fiction ultimately we are talking about an attitude toward death.”﻿

This quote—which comes from Thomas Pynchon’s introduction to his collection of early stories, Slow Learner—was brought to my attention by Ben Sachs. Though, broadly applied, Pynchon’s thesis is debatable, it goes a long way toward explaining what makes The Grey—a Liam Neeson vs. wolves movie from the guy who did Smokin’ Aces and The A-Team—one of the most serious and, in many ways, most accomplished movies to come out of Hollywood (or whatever we’re calling the fractured American studio system nowadays) in a while. It’s “an attitude toward death” that shapes every part of The Grey—from the pacing and structure to the restricted color palette, which often casts characters as wispy figures against a blinding blank whiteness—and that attitude is unsentimental, harsh, and, above all, profoundly serious.

Ostensibly, The Grey is an action-thriller, so, considering that it belongs to a genre predicated on a constant meting out of violence—and a sub-genre (let’s call it the “people trapped in the middle of nowhere” movie) the mechanics of which depend on the unlikely survival of the characters—one of the first things that stands out about the film (aside from the intuitive roughness of Masanobu Takayangi’s camerawork) is its nonchalant grimness, a quality it shares with John Carpenter's similarly cold-cold-cold-looking The Thing.

The possibility of death is introduced, that possibility turns into inevitability, death comes and is then considered—The Grey is structured as a string of scenes that proceed according to this pattern. The repetition recalls Sam Peckinpah’s apocalyptic Pat Garrett and Billy the Kid—except that Carnahan, it turns out, is even less of a romantic than Peckinpah was. There is no grand West fading into an uncertain future, no slow motion, no "Knockin’ on Heaven’s Door"; these are fairly ordinary men letting go of their unremarkable lives in the face of a bleak, matter-of-fact, vivid, tactile doom.

Death in The Grey is crude, unfair and inevitable; this isn’t a movie about endurance or heroics—it’s about men being eaten by wolves, one by one, and the fear, anxiety, and resignation they experience. The decision to render the wolves largely as CGI silhouettes, has the (possibly unintentional) effect of making them seem more like metaphorical threats than physical ones; they neither look nor move like real animals, but are instead animated figures, half-glimpsed in the edges of the frame—nightmare shapes, wilderness spirits, or maybe demons who’ve come to drag the men away. One shot—of a torch illuminating a dozen pairs of eyes waiting patiently at the edge of the survivors’ camp—looks like a fairy tale illustration. And, in a sense, The Grey is the story of a fairy tale—the fairy tale of danger as the proving ground for a man’s character, and of being able to overcome certain doom by staring it right in the face.

Neeson—in a role so goddamn Neesonesque that it’s kind of surprising that was originally given to Bradley Cooper—plays a severely depressed Irishman who has taken a job killing stray wolves for an oil company. After a plane full of pipeline workers crashes in the Alaskan wilderness, Neeson—his rifle ruined in the crash—takes it upon himself to protect the survivors. It’s an exclusively male (there are only four women in the movie: two flight attendants, a bartender, and Neeson’s wife, who is shown in flashbacks), professional milieu that thrives on non-stop tough-guy posturing (early on, one character refers to Grizzly Man as “that asshole’s documentary about the fag who loved bears”), where macho myths of endurance and death are taken for granted—myths which are an integral part of the genre, and which Carnahan (who co-wrote the screenplay with Ian Mackenzie Jeffers) dismantles over the course of the movie’s two hours.

Positioned at first as a relentless authority figure à la﻿ Taken (one early scene has him bluntly informing a man fatally injured in the crash that he is going to die in a few minutes, and none of them can do anything about it), even Neeson gets dismantled; despite his experience, he’s frankly pretty awful at protecting the group. A good part of the movie is taken up with the survivors constructing makeshift defenses based on Neeson’s instructions—torches, sticks with rifle shells on them—that prove largely ineffective. This is Carnahan’s chief tactic throughout The Grey: to at first appear to be taking blustery machismo at face value (for example, the hard-boiled opening, narrated by Neeson, has a tough-noir flavor), only to disprove it later on. The early scenes—with their vulgar energy and interplay of unshaven, weather-beaten faces—give way increasingly abstracted demises (one drowning recalls Un lac) and a lot death-row talk, the men extrapolating on what they’ll do when the wolves—who always appear out of nowhere—will finally come for them (at about the two-thirds point, The Grey starts seeming like a movie about the epic struggle of Nature vs. Monologue). Things can only delayed, not avoided—﻿and all the avoiding buys you is time to think about the inevitable.

The Grey isn't exactly the film you'd expect from Carnahan, whose most recent features have consisted of a post-Tarantino clusterfuck / reversible film par excellence﻿ (Smokin' Aces) and a campy, colorful action flick with a heavy John McTiernan vibe (The A-Team). But that isn't to say that The Grey is some drama disguised as an action movie, or that the thriller stuff is somehow duplicitous; in fact, Carnahan's mortality fixation only makes it more effective as a genre piece, and his keen sense for the construction and visual geometry of an action scene gives weight to the characters' fears. What The Grey suggests is that Carnahan is a once-in-a-blue-moon kind of filmmaker: extremely capable within a genre, but also willing to think about it critically.