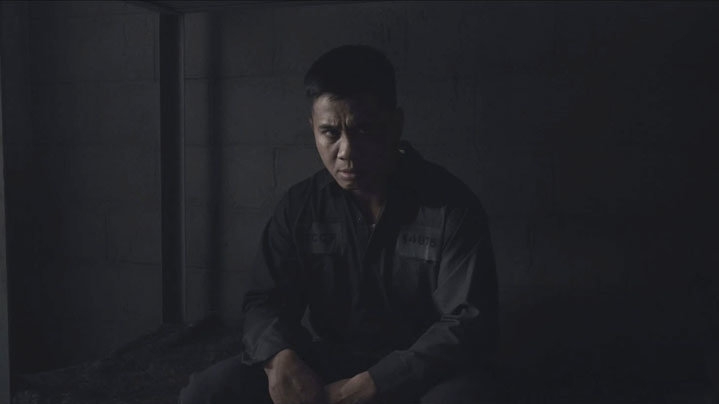 Universal Soldier: Regeneration established John Hyams as a director with serious trad action chops, an acuity for 'scope framing, a disarming sense of emotional gravity, and a fondness for big dilapidated spaces. Like Joe Carnahan's somewhat-similar (albeit more "realistic") The Grey, Regeneration is a surprisingly actorly action movie—﻿especially strong in its use of Dolph Lundgren, an underrated actor if there ever was one—﻿﻿with a bleak moral palette. However, very unlike The Grey, Regeneration isn't especially talky—﻿﻿﻿the performance come chiefly through looks and posture, which allows the acting to blend with the action.

Hyams' new film, Dragon Eyes, isn't an accomplishment on the level of Regeneration, and some of its flashy conceits—﻿﻿﻿like the Guy Ritchie-esque on-screen titles, or the cartoonish color grading—﻿﻿﻿﻿never gel with Hyams' camera style. ﻿Still, it's, as they say, "not without its pleasures"—﻿﻿﻿and many of those pleasures could teach bigger-budgeted action directors a thing or two about how to make a movie.

Dragon Eyes﻿ stars MMA fighter Cung Le as Hong, a familiar kind of principled genre-movie loner: new to a lawless town (the fictional city of St. Jude), ready to take down a corrupt lawman (Peter Weller) and the rival gangs who pay him for protection.  The material's about as generic as it gets, enlivened—﻿as these kinds of things often are—﻿by a few oddball supporting turns (Weller, for one, seems to be having a great time chewing scenery).

Quippier and less poker-faced than Regeneration, it's not exactly heavy stuff—﻿﻿﻿﻿but what's instantly recognizable in Dragon Eyes is Hyams' seriousness about the genre. For one, there's his casting of action cinema's favorite intense sadsack, Jean-Claude Van Damme, as Hong's seen-only-in-flashback mentor (Hyams, by the way, is the son of Timecop and Sudden Death director Peter Hyams, making him a second-generation Van Damme wrangler). Hyams' use of Van Damme is only partly totemic; JCVD has one of contemporary cinema's great hurt, tragic faces, and he imbues what's essentially a "character-building" backstory role with eccentric gravitas. ﻿

For another, there's Hyams' direction of the action scenes. The fight choreography (by Le) is smart and practical (understandable considering the low budget), with an emphasis on athleticism and follow-through over acrobatic flash; one early fight scene climaxes with Hong pinning an assailant, disarming him, hitting the man in the face with his gun's clip, and then using the now ammo-less pistol as a throwing weapon against another attacker. The camera and editing similarly emphasize force, momentum, and causality; there's an innate understanding at work here that action isn't just about stunts and explosions, but about the relationship between the camera and its subject—﻿about different kinds of movement in tandem.

In many of the film's "big" scenes, there's also an emphasis on the actors as bodies within a space. Hyams likes outsized, rundown locations that dwarf the actors: a seemingly-block-sized auto body shop used in a single-take Steadicam sequence; prison cells the size of apartments; what looks like an abandoned airplane hangar, lit entirely by car headlights; lots and lots of disused factories and warehouses.

The cavernous set fetish recalls a more-established B auteur—﻿﻿Paul W.S. Anderson. In Anderson's anything-goes movie universe, the spaces are game-like; just check out The Three Musketeers: the film's prologue plays out on a map of Europe made to resemble a tabletop wargame; the characters break into Leonardo Da Vinci's vault (don't ask), the floor of which is tiled like a chess board; Cardinal Richileu plays chess with the king in a massive circular office that has miniature soldiers on the floor﻿; and the movie's trap and obstacle-filled set pieces all recall third-person shooters and platformers. Hyams' big spaces—﻿﻿﻿with their downward beams of white light—﻿﻿﻿﻿resemble theater stages or abandoned arenas.

None of it ever reaches the action-as-grand-drama fever-pitch of Regeneration, and the tone—﻿﻿﻿﻿﻿﻿which veers from molto serioso to self-conscious camp—﻿﻿﻿﻿﻿﻿﻿is wonky, ﻿but every now and then, Dragon Eyes manages to pulls out an image (like the thugs that emerge slowly from behind columns in—﻿﻿﻿﻿﻿you guessed it—﻿﻿﻿﻿﻿a big abandoned factory) or a bit of casting (such as the heavy played by Trevor Pangley, a South African UFC fighter with not one, but two cauliflower ears﻿) that briefly eclipses its secondhand hokeyness.

Hyams first made his name as a documentary filmmaker, with The Smashing Machine, which focused on MMA fighter Mark Kerr and his struggle with drug addiction, and Rank, shot at a rodeo world championship in Nevada—﻿﻿﻿﻿﻿two films about the emotional toll of feats of extreme physical endurance, and, conversely, the things that drive people to participate in these kinds of sports in the first place. Dragon Eyes is at its best when it lets Hyams indulge this theme; the plotting may be cheesy, the humor may be hit-or-miss, but when it all gets pared down to characters confronting one another (and their own endurance) within a space—﻿﻿﻿when all of those Screenwriting 101 character motivations become physicalized—﻿﻿﻿﻿it takes on a certain kinetic grandeur.