The great Maurice Pialat reportedly claimed to edit his films by paring away all the footage that didn’t strike him as true. This may account for the sustained emotional intensity of his work, his jarring transitions between scenes (it’s rarely easy to gauge how much time passes from one sequence to the next), and the way his movies accurately capture the feeling of being alive even when their content departs from strict realism. A similarly cryptic logic governs Mia Hansen-Løve’s The Father of My Children (2009), a film that portrays both coming-of-age and the legacy of art as a steady accumulation of observations. The movie’s timeframe encompasses about a year, though Hansen-Løve avoids any strategies that may give the story any recognizable pattern. Yes, it’s divided more or less in half, but there’s no marked change in the tone of the storytelling: impactful, even joyous moments still accumulate after the main character’s suicide, propelling life ever forward and insuring that the living continue to mature. For all of Father’s stylistic similarities with Pialat, its philosophy is far more reassuring than that of many of his films. It’s one of the few recent European art movies to argue persuasively that happiness is possible in modern life—and it’s persuasive because Hansen-Løve never belabors the point. As of this writing, I’m 29, just over a year older than she was when she made the film; I still have no idea where its patient wisdom came from. 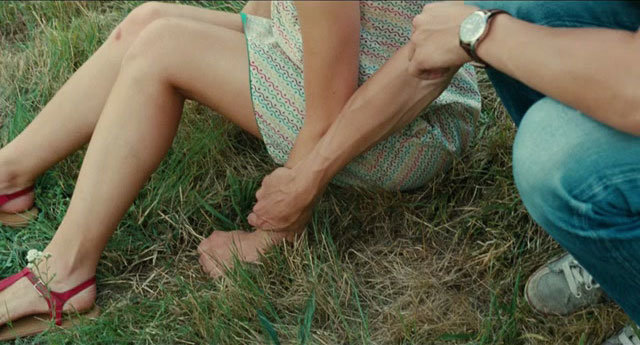 Goodbye First Love, Hansen-Løve’s first film since The Father of My Children, is a more ambitious work in that it covers a longer period of time and its organization is even harder to diagram. The movie seems to advance by intuition. Its story follows Camille (Lola Créton) and Sullivan (Sebastian Urzendowsky) from their adolescent love affair and traumatic breakup into their mid-20s, when they reunite after several years. Nothing happens comfortably or predictably: Hansen-Løve will devote several minutes to a seemingly mundane action, then advance the plot several months into the future with a simple, unassuming edit. (The greatest elisions, usually skipping over a few years at a time, are denoted by slow fade-outs that suggest the line breaks in a poem.) And while she stands close to Camille’s perspective for the majority of the film, Hansen-Løve will abandon her at critical moments to view scenes of Sullivan alone. It’s puzzling as to just whom or what is guiding the film (though since it pulses like a living thing, it’s clearly being guided by some force); perhaps it’s the characters’ passion itself, which has transformed the film’s structure no less radically than it has these two people. Hansen-Løve is playing with aspects of narrative movies that viewers tend to take for granted, turning them inside-out.

This is entirely apt for a movie about first love, which always feels epic to those experiencing it and less so to observers. Indeed, it’s hard to synopsize the movie’s content without making it sound trite. (Both the film’s original title—which translates literally to A Love of Youth or A Love From Youth—and that of the U.S. release are bland yet accurate descriptors.) Hansen-Løve’s subject is how it feels to love somebody too passionately—the all-consuming romance we must experience but ultimately reject in order to grow up. She’s keen to its exhilaration as well as its dangerous unpredictability: the film has a nervous momentum you can’t quite put your finger on, as though something very bad might happen at any time. Yet the film preserves the reassuring warmth of The Father of My Children, which persists even when the characters resist easy sympathy. Hansen-Løve seems confident that the mistakes of youth (of which the film contains many) can lead to knowledge: the propulsive sense of development all but insures that it does.

It’s indicative of the director’s sensitivity that every time the story moves forward a few years, the characters seem to have learned something in the interim. Their faces betray some sad or protective quality they haven’t shown before. Remarkably, all of the main actors convey a decade worth of emotional development without the usual assistance of make-up or costume changes. Of the several stellar performances, Créton’s is worth singling out, as the actress (who was only 17 when this was shot) believably transforms from a child into a fully-formed adult. She doesn’t overstate Camille’s naivete as a kid nor does she overstate her poise as a married woman: core aspects of the character remain constant, no matter how many exterior qualities she sheds. Créton’s work achieves something similar to the CG effects of The Curious Case of Benjamin Button, another recent movie that made the passage of time seem otherworldly. She makes it clear that something beyond her is shaping the character’s development—for lack of a better word, call it maturation, a process that never registers as you’re undergoing it, but makes itself known only when you realize it’s taken something valuable from you. Goodbye First Love makes palpable this exhilarating act of theft.

The film ends abruptly, and yet at exactly the right moment. Hansen-Løve doesn’t sustain Camille’s final epiphany, which only makes it feel more true to life. The character, now a grown woman capable of elegizing her youth, hasn’t experienced a lifetime of love and regret—she only thinks that she has. In reality, those feelings will give rise to others that are equally powerful, albeit easier to navigate. Her experience is universal, yet few filmmakers have responded to it through cinematic form as exactingly as Hansen-Løve does here. This film conveys the impermanence of youth by playing up another basic fact that movies take for granted: that the images you see in a theater are constantly disappearing before your eyes. ﻿

An earlier version of this piece appeared on the Chicago-based website Cine-File last October.