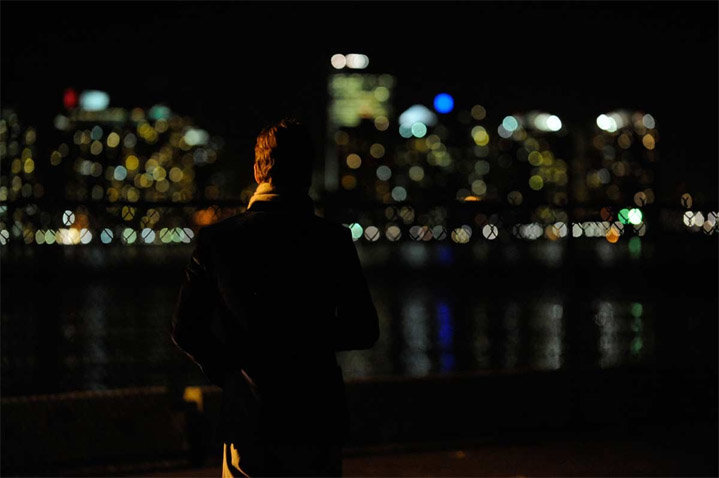 In Steve McQueen’s Shame, Michael Fassbender plays some kind of advertising executive who has some sort of sex addiction. His sister (Carey Mulligan), whom he’s been ignoring for some reason or other, shows up at his place; the two have a relationship that might or might not be incestuous, but which definitely / possibly involves some kind of bad childhood stuff (maybe). Probably because his sister’s around, Fassbender has trouble doing his whole sex addiction thing, eventually gets beaten up outside of a bar, and is forced to get a blowjob from, of all things, another dude (that Shame equates gay sex with a personal Hell is a big hint toward its essentially reactionary inner workings). Throughout, McQueen opts for long-take, low-energy vagueness; its prettiness nearly masks the fact that the basic notions that inform the film—its images, its ellipses, its characterizations—are mostly inchoate, if not (as in the case of that blowjob scene, filmed in what looks like a red-lit butcher shop) downright ugly. These notions are, as follows: “sex can be both a dehumanizing and transcendent experience” (you don’t say!), “addiction can take over a person's life” (really?), “people are often motivated by past trauma” (well, I’ll be!), and “we live in a culture that nourishes emotional isolation.”

McQueen happens to be a clever filmmaker, well-versed in contemporary festival style and capable of crafting a virtuoso sequence; one in particular, a date between Fassbender and some kind of co-worker (Nicole Beharie) even comes close to formulating something like a position. Like Hunger’s 17-minute “thesis scene” between Fassbender and Liam Cunningham﻿, it's a self-contained film-within-a-film, executed in a single take (though, unlike the Hunger scene, the date sequence is shot with a technically precise ultra-slow zoom dolly-in); it's Shame's talkiest, least static scene—﻿the only one where something like a movement of emotions or ideas can be perceived—﻿but right after it ends, McQueen again opts to shroud the movie in vagueness. This goes beyond the characters—﻿Fassbender as the barely-sketched lead, Mulligan as the generic broken woman (tellingly, her sex life is played as comedy while Fassbender's is played as grand tragedy), Beharie as the foil whose attraction to Fassbender is never explained—and their relationships; ﻿﻿Shame is a Choose Your Own Meaning movie, full of blank spaces that a sympathetic viewer can fill with their own interpretations (this culminates in a lengthy sex scene between Fassbender and two women, with Fassbender's facial expression serving as a sort of Rorschach﻿ blot).

It's smart filmmaking—﻿and also totally duplicitous and self-serving, the arthouse craftsmanship nearly hiding the film's middle-brow triteness (see also: I Am Love), every scene ladled with big dollops of cinema's most respectable cop-out: ambiguity. When McQueen isn't marking time with exercises in post-slow-cinema aesthetics (as in the long tracking shot of Fassbender sternly jogging to his bitchin' Glenn Gould playlist), he elides and defers. Shame wears its emptiness like a badge of honor; McQueen is trying for banal blankness, and though he succeeds in that respect, you kind of wish that a filmmaker (and one with a background as an artist at that) would aspire to do more than just say nothing.