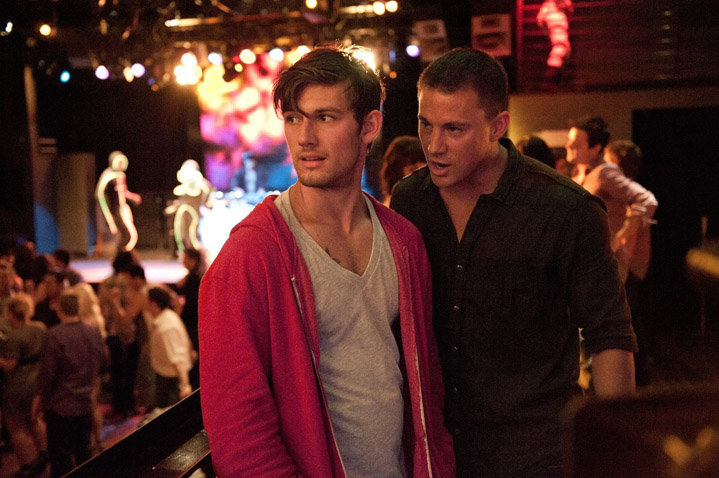 Early in Steven Soderbergh's new film, Magic Mike, there's a scene where the handsome fuck-up known as The Kid (Alex Pettyfer) runs into the title character (Channing Tatum) outside of a nightclub. The Kid is bored out of his mind after a dinner with his sister (Cody Horn﻿) and her insurance claims investigator boyfriend (screenwriter Reid Carolin); he begs the well-dressed, affable Mike—﻿whom he met earlier in the day at a construction site—﻿to help him get into the club. Mike agrees, on the condition that The Kid will do him a favor.

Once inside, Mike introduces The Kid to a few of his friends and then promptly calls in said favor: The Kid has to go and strike up a conversation with a college girl Mike has spotted at the bar who is out celebrating her 21st birthday. The Kid approaches; he shooes away a jerk clubgoer by pretending to be the girl's boyfriend. They talk; he charms her with his good looks and decent-dude charisma. The scene plays out in a single static wide shot. The girl, her friends, and The Kid are on the right side of the frame; on the left is the cavernous space of the club, full of people and lights and bustling activity. Mike arrives with drinks, and the film cuts to a reverse angle—﻿﻿except it isn't quite a reverse angle, because now all of the actors are framed from the chin up, with the ceiling of the club filling up the upper half of the anamorphic widescreen frame. Again, the camera is completely static.

Mike is a even more of a charmer than The Kid. He jokes with the girls, and gives them a handful of leaflets advertising Xquisite—﻿﻿﻿the strip club where Mike performs several nights a week—﻿﻿﻿﻿and makes them promise to come and bring their friends. At this point, the film begins cutting to individual close-ups of the actors' faces—﻿﻿﻿﻿except, in nearly every shot, the faces are obscured by lens flares coming from the club lights. The result is close to abstract.

This sequence captures the essence of Magic Mike, a movie that counterposes oblique art-film experimentation with deftly-executed beefcake musical numbers, real-world detailing with Hollywood escapism, and clinical analysis with actorly charisma—﻿﻿﻿﻿﻿all without ever betraying its genre, setting, archetypal characters, or raison d’être. ﻿﻿Steven Soderbergh's second film of 2012 is what you'd call a "major minor" movie﻿: a low-stakes melodrama about male strippers that's utterly committed to the garish, flattened world of its characters—to giving the audience a sense of the economics and business practices of the profession, of the backstage world, of the physicality of the dance numbers. 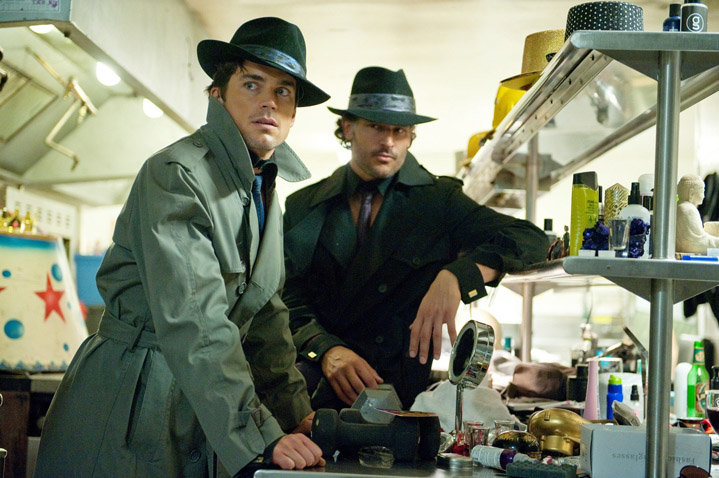 The striptease sequences (that raison d’être﻿ mentioned above) are handled in smart, no-bullshit ways; Soderbergh eschews fast cutting and close-ups in favor of big-canvas shots that frame the dancers against their audience and showcase the athleticism of their routines. There's also a palpable appreciation for the characters—﻿﻿﻿﻿﻿﻿﻿﻿﻿﻿﻿﻿simple as they may be—﻿﻿﻿﻿﻿﻿﻿﻿﻿﻿﻿﻿as performers and as people, and Soderbergh's long takes occasionally tease a downright Hawksian sense of verbal and personal interplay out of the movie's men-who-admire-one-another, as well as from the tough gals (Horn, Olivia Munn as Mike's bisexual no-strings-attached flame) who more than hold their own against them.﻿ There's a lightness of touch, a crisp sense of space and forward narrative movement, and a feeling of play—﻿﻿﻿﻿﻿﻿﻿﻿﻿﻿﻿﻿﻿with lights, shapes, angles, and shot durations—﻿﻿﻿﻿﻿﻿﻿﻿﻿﻿﻿﻿﻿to the way Soderbergh, acting as his own cinematographer, composes certain images.

Though he's built like a killing-machine action star, much of Channing Tatum's appeal as a screen presence lies in his easygoing charisma and ability to project reluctance and guarded insecurity. The character of Magic Mike, a role written specifically for Tatum, ﻿plays off of those qualities; he's a likeable lug, a big oaf dreaming a pathetic dream—﻿to build hideous-looking "custom furniture" out of junk parts—in Tampa. Mike introduces himself to people as an "entrepreneur;" though he claims that all of his "business ventures"—construction,﻿ stripping, auto detailing—﻿﻿are part of a plan to build up enough capital to start his furniture company, his brand-new pick-up, nifty condo, and out-all-night partying say otherwise. ﻿

Mike's unrealizable dream is really just a way for him to treat his life as a transitional state rather than a permanent one ("I am not my job, I am not my lifestyle," he announces somewhat desperately toward the end of the film); he gets to pretend that he's a future capitalist rather than a current commodity. In many ways, Magic Mike serves as a lighthearted companion piece to Soderbergh's The Girlfriend Experience (2009)﻿, a film that similarly used sexuality—and the objectification of the lead character's body—﻿﻿﻿﻿﻿﻿﻿﻿﻿﻿﻿as a way to talk about commerce. The difference is that, while The Girlfriend Experience's high-priced escort Chelsea was aware of her status as a commodity, traded like a stock between rich men, Magic Mike lives in happy self-denial; he thinks of himself as a self-made man, one-of-a-kind, a guy who "works with his hands" (and his shoulders and his abs and his ass).

That isn't to say that Magic Mike is a bait-and-switch movie—some American Dream takedown disguised as girls' night out fare. Rather, what Soderbergh does is balance the film out—﻿putting an odd framing here, a Recession-era reality there. It may not be a film of any great depth,﻿ but it has plenty of substance. ﻿