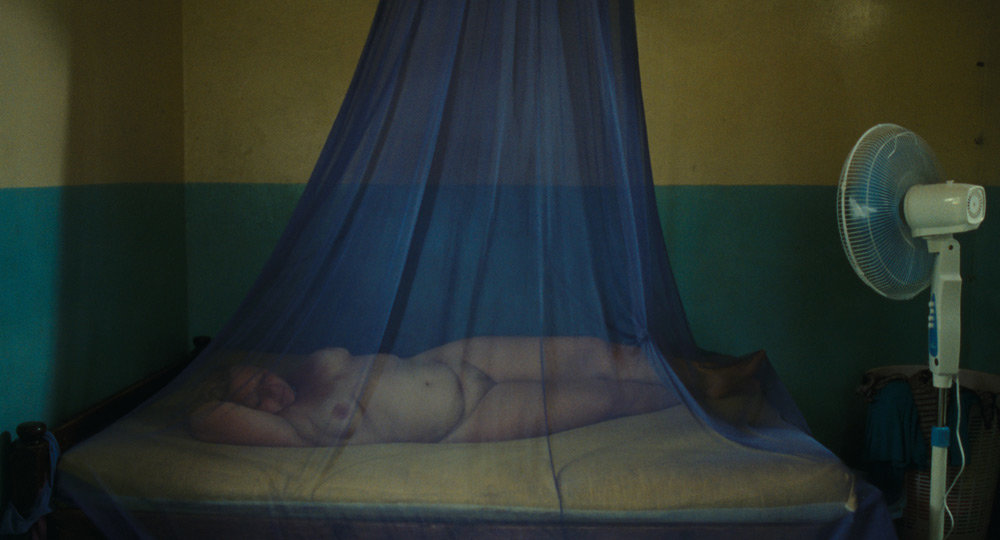 In Paradise: Love, the first part of a trilogy of films by Austrian filmmaker Ulrich Seidl, the camera is entirely presentational. It says: here is this! The story is of a female tourist (Margarethe Tiesel﻿) who travels to Kenya and very quickly, whether by original intent or not, begins to look not for a quick lay but for something like “love” among the readily available population of male prostitutes. What is before the camera is like documentary: all real locals, real spaces and practices—all research. The rest, of course, is fiction, and it is the fiction which addresses us like so: let me show you this! Nearly every shot exists with an originator: we see how we get to a place, and that place is always a something.﻿ It is an excitable filmmaking, one suffuse with its enjoyment of delivering discovery.

Of the story itself—of, basically, a sex tourist, of what the local population hounds tourists for and asks of them (seen, of course, from the tourist's point of view), and what a tourist asks of them, of the ironies, hypocrisies and blindnesses of the trade—little is surprising or risky, and indeed the revelations proceed as if practically a genre itself, films of 21st century sex tourism. The initial surprise of the local offerings, the laughing dismissal yet growing curiosity of the tourist, the transactional nature of everything, even of the cinema shot, where almost no shot exists without a point of view dialog between the tourist and a local (even if the audience, observant to ironies, stands in for that local), all is what one would imagine of such a story. This mix between the expected or conventional and continual discoveries of the style lends for a remarkably discomfiting film, an awkwardness or conflict presented often scene by scene, a clash not just from the narrative drama but even of the staging of the drama, this kind of story shot where it is with these people, on "location" and "real." It makes the very idea of tourism and even of filming tourism as something awkward, unnatural, compromised and conflicted.

It is Seidl's filmmaking, not the story, that constitutes the discovery, the presentation of spaces, real but framed wholly, with geometric precision, as if parceled out, each an element unto itself with its own key observations: the symmetry of sunbathers, the line in the sand dividing a resort from the local population and an apartment into rooms, the intrusion of live monkeys into a staged shot, the deep purple of Kenyan twilight (captured in 35mm), the image of a sleeping odalisque, of the supposedly ugly, overweight and old Austrian tourist instead a thing of extreme beauty.

All is as if the world is a whole and is contiguous, but each parcel, despite leading to another, is also a thing, discoverable, containable, remarkable and fact-filled, situation and location based, textured by color, geometry, and light. One shot of Tiesel﻿﻿ at her hotel uses the black and white painting of a leopard above her bed to pull out the black and white grid of the bed's wicker headboard; a later shot from the same angle has taken a step back and instead pulls out the pink of the bed's curtains by revealing, quietly, the pink in wallpaper unseen in the previous shot. Here, each shot tells a story, silent cinema style, and Seidl's cinema resembles the railroad-like cinema construction of the silents. Yet he is not just presentational; this presentation confronts, each parcel is almost like an accusation, hovering between a declaration and a challenge. Kept in check by Tiesel﻿'s marvelous performance, by turns purposefully naïve as a tourist yet funnily canny and clever when flirtatious, when she attempts to get past the prostitution and force a human relationship from the exchange—especially in a terrific sequence where she teachs her “beach boy” subtleties of German grammar and how to softly stroke not two breasts but one—the confrontations of Paradise: Love are never attacks, stunts or gimmicks. All seem rooted in a reality fairly intruded upon, packaged, connected, opened up but intentionally directed, assembled and delivered.

Strangely, it all seems fair, a middle ground between things, like with Herzog, pushing for a more immediate, brutal truth, uncomfortable but grounded. This duality is also what Herzog gets at, compromising reality for a purpose, rooting fiction in facts, making you aware of a blended line between two worlds; that is Herzog's synthesis. Paradise: Love is not after synthesis: Seidl's story is smooth but the intrusion on the world he has chosen to explore (or burden his film with) does nothing less than confront that difficult line, a formal strategy that pulses out into the surrounding story material as this sense of discovery and confrontation, re-activating the expected and electrifying it.﻿