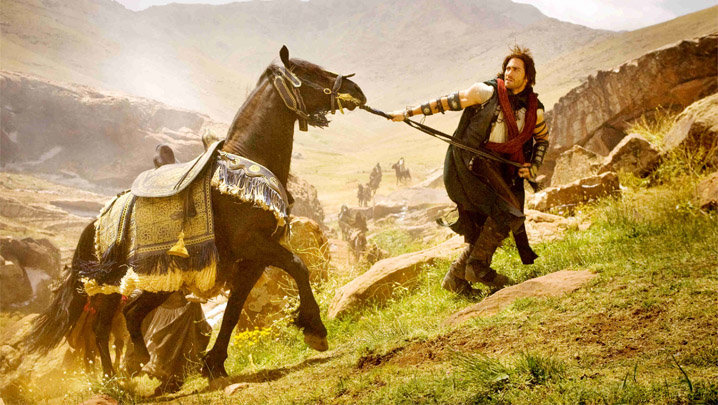 I wanted to see Prince of Persia: The Sands of Time for three reasons: (1) it's produced by Jerry Bruckheimer, whose strong financial instincts tend to eclipse the cartoon tomfoolery, phantasmagoric flights of fancy, word games, leisurely narrative contrivances and weird metaphoric set-pieces of his best productions; (2) it casts Jake Gyllenhaal, an actor whose face seems to be in retreat from itself, and who can out bumble / mumble Tobey Maguire and Michael Cera combined, as an action hero; and (3) the stunts were coordinated by parkour specialist / exceptional human specimen David Belle. On those last two points: Gyllenhaal is essentially a passive protagonist, cast in what could be called the "Orlando Bloom role," asked to do little more that flash a disarming smirk and recite exposition in a blurry English accent; if any parkour stunts were put together for the film, they were lost somewhere in the editing, and all that's left is a shot of a man leaping up cut to a shot of him running across a roof. Which leaves us with the first point: Bruckheimer.

Two things that can be counted on in modern Bruckheimer productions are an aesthetic (over-polished 'scope images photographed on Kodak stock in an era when special-effect-heavy movies shoot digital) and muddled libertarianism (admiration for power + distrust of government, lampooning of bureacracy + militarism, faux-timeliness + bizarre fetishization of monarchy); the one thing that doesn't stay consistent is quality, sometimes not even within the same film. For all of his clout as a producer, and all that he puts into over-casting his films and letting screenwriters run wild, Bruckheimer's productions are ultimately at the mercy of their directors, and unfortunately Mike Newell happens to be a hack.

At under 2 hours, Prince of Persia is pretty short and concise for a Bruckheimer picture, but Bruckheimer movies don't need efficient directors. Our pal Jerry B. has these archetypes and subjects—which you would call fixations if they seemed motivated by anything other than box office potentional (they are, however, actual fixations for the genuinely neurotic Michael Bay)—that he manages to build his big projects on again and again: likeable scoundrels, regal leaders, characters on the run from the government and the invariable plot point of dynastic / family honor, which unites movies about pirates, robots, middle school American history factoids and time-traveling Persians by giving their protagonists an unhealthy obsession with clearing the family name (this often plays into the large number of absent fathers in the Bruckheimerverse). A lean Bruckheimer film ends up consisting (as Prince of Persia does) of these tenets; what the films need, then, even to just be entertaining, is fat, an excess of scenes or scenery-chewing or scene-stealing, and the only time this movie actually comes close is when it cribs from Pirates of the Caribbean and makes a detour to fake bandit / ostrich-racing magnate / conspiracy nut Alfred Molina's desert tax haven. Bruckheimer franchisee / professional Nicolas Cage wrangler Jon Turteltaub would've made something more fun out of the movie's straight-faced silliness, heavy on dramatic eyeshadow, and Gore Verbinski would've at least cared about the editing and the images. Diagnosis: insufficient mayhem. Newell has been given the tools to go Chuck Jones but he goes Hanna-Barbera instead, all formula, no (comic / dramatic / satirical) substance. Oh well, at least there's still The Sorceror's Apprentice to look forward to.

Prince of Persia: The Sands of Time