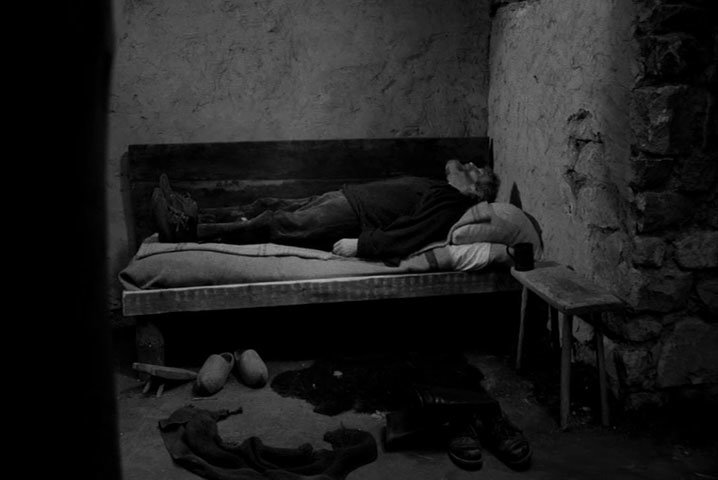 In the third shot of Bela Tarr's newest film, The Turin Horse, the haggard daughter (Erika Bók) of the titular horse's owner (János Derzsi) is seen removing her father's work clothing, replacing them with clothes for him to rest in so that he may lay down in bed.  The shot starts with the camera looking up the length of the bed, which lays in the corner of the house underneath a small window, but as the scene progresses the camera tracks to the right in a semi-circle around the bed as the dressing continues, ending facing the bed perpendicularly, the small cot taking up the entire length of the 1.66 frame.  Much of the Hungarian director's work of the last two decades has been made up of such choreography, a very unique, monumental kind of choreography in cinema: the practiced actions of his actors throughout shots of long duration precisely timed within the lugubrious, slow motion movement of the camera, which steps, bobs, almost imperceptibly zooms in and out, and otherwise dances slowly around its subjects.

The figures move, the world moves, and the figures move within the moving world, all with a weightedness, a drag, a heft—Tarr's sequences, as in this shot of clothing in The Turin Horse, have a mesmeric viscosity to them.  And this mesmeric power, this weight to what the camera is pointing at—not to mention a weight of tone—hinges not just on the viscosity of the choreography, but, in the manner of all long take practitioners, Mizoguchi, Jancsó, et al., it hinges also on its virtuosity. Everything swings perfectly, grimly, just so.

Until one moment.  In this particular shot, towards the end of the camera's arcing track, where it is just starting to rest after its movement produced a total change in perspective—the bed no longer jutting away from the frame, with its length, but now filling it flatly, sideways—and the daughter is continuing to replace her father's clothing on his beleagured body, the woman's shawl falls from her shoulders.

It happens in an instant, an instant so sudden and unexpected in the measured rhythm of the shot's, the film's pace, the burdenous weight of the lengthy, lumbering shots that have so far made up The Turin Horse, that the moment almost seems an error of the film print itself, a scratch on the frame or, more accurately, a Méliès trick of jump cutting and magically vanishing something that was in the frame.  So quicksilver-like does the shawl fall.  It must be an accident, an on-camera mistake—nothing could be so spontaneous, so unmediated, so free and quick in such a film and one by such a director.

And yet.  The daughter finishes her dressing, leaves the frame, and the camera continues zooming out—it had imperceptibly zoomed in, as Tarr and his cinematographers often do to hide some of the perspective shifts inherent in such spatially audacious and complex camera movements—so as to find the final composition of the shot.  Her father finally lays down after something like twenty-five minutes (across all of only three shots) combating the wind, his horse, his cart, his clothing, his body, the world.  His body is like a relief carved in a tomb, so solemn and stone-like is his prone shape on its resting place.  And in the bottom left corner of the frame lays the shawl, in a beautifully quiet quarter-moon curve, breaking, subtly, the sharp pictorial quality of the image—no longer a sculpture of an already-dead man but a three-dimensional moment frozen for an instance.

The shawl changes the entire feel of the image, the syrupy undertow pull of the world.  It rests; he rests; and for an instant we rest.  And then the daughter re-enters the frame, picks up the shawl, and moves on with her housekeeping, the camera staying on her and the steady weight again falls on the shoulders of the film, shoulders relieved, briefly, by an accidental shawl.

The Details is a column that catches the small within the big, focusing on the individual elements that make cinema so expressive.