An ambitious project: three different directors, one central location, one core plot element, three feature length films.  Discreet films, yet this is a television project, a medium where ﻿scope does not preclude detail, and vice versa. Perhaps Dreileben is the best of both worlds, as it really is unfair to talk about how stellar an episode of serial television is, when that episode is contingent on surrounding entries.  Each film in this trilogy—directed by Christian Petzold, Dominik Graf﻿ and Christoph Hochhäusler﻿—can and does stand by itself, mysteries explained by the other features left as more powerful, unsolvable ambiguities reverberating around the frames' edges.  Disassembly is easy, then, but reassembly is also possible, and strange.  Without the television's producer to guide a relative aesthetic consistency between directorial entries, we have three puzzle pieces that somewhat-fit into a narrative, a space and a mystery. 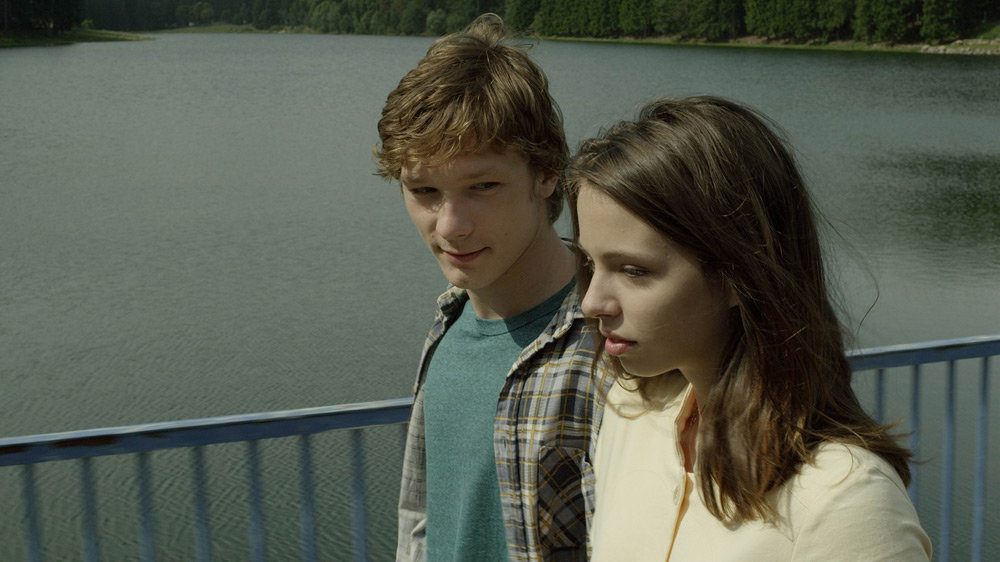 Petzold's Beats Being Dead stands alone, not just as the finest film of the three but as the most self-sufficient; the director's tautly restrained framing, use of space and spare mise-en-scène﻿ is particularly well-suited for engaging with a kind of surgical analysis and precision his story's tropes of genre and fairy-tales. We enter the film in the middle of a sullen-eyed and slow-motion class climbing story: our hero is a hospital resident lazily studying to become a doctor; above him is the head doctor's wealthy, blond daughter, placed behind doors, inside cars, within security monitors, always out of reach; and below them both is a young Bosnian girl who cleans rooms at a hotel, is tossed off by a local biker gang and who latches on to the young man as a step up in the world.

The love flaring between the hospital resident and the Bosnian girl is the film's center, as both aspire to the vague pleasantries of an abstract, barely suggested higher plane of livelihood.  Around their lives is a fairy-tale forest in which lurks the murderer whose escape and flight from the police is the event shared across Dreileben.  Petzold structures his work like a diagram, a proof to be run and proven, a cinematic technique that is as dry as it is potent—each location, each shot change, every chance word spoken, all carry the weight of impactful content on the progression and developmental of this scenario, of this lower-middle class guy plus lower class girl plus indeterminate forest space equals success in life and love for who?  So rigid is this form that the mystery that slides between and around all three films becomes powerfully evocative in Beats ﻿Being Dead because it's the only uncertainty in Petzold's world. This escaped killer, these walks people must take to get everywhere, this pervasive sense of danger, that one might be knifed at all times—the kind of atmosphere where a class-climber or a lover's (are they the same thing?) wrong word or wrong move can not just ruin one's life but end it.  The chilling ending evokes both potentialities, entwined, love and money, dismay and death. 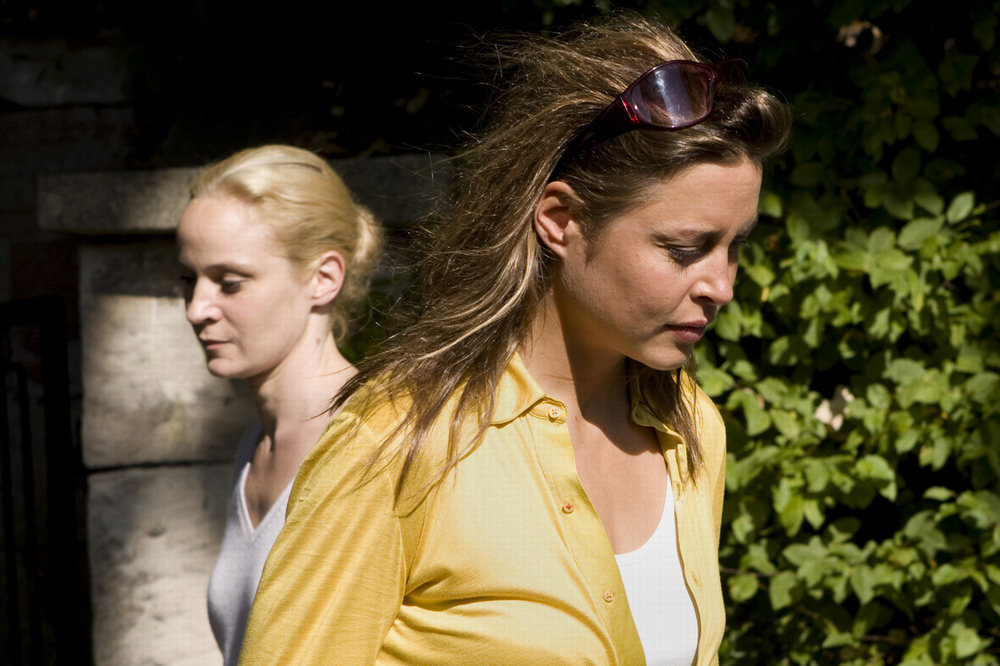 Where Beats ﻿Being Dead is a clean proof drawn in ink on graph paper, Dominik Graf's second entry in the series, Don't Follow Me Around, is a patchwork, a roving, 16mm camera eye (compared to Petzold's and Hochhäusler﻿﻿'s RED camera) of fuzzy globs of color and a hyper-attentive, almost skittish editing, recalling Alain Resnais' desire to piece together time, space and meaning through fragmented, documentary observation of world details splintered off from conventional understanding.  Yet this film is also the most melodramatic, most screenplay-like, focusing on characters (rather than Petzold's machines, Hochhäusler﻿﻿'s figures) with paths, emotions, secrets, desires.  The heroine is an investigating psychologist who visits the central town to assist in the capture of the escaped madman. Graf holds her in a ramshackle, bohemian house of East German cultural heritage with an old girlfriend of hers and the girlfriend's husband for late night wine-fueled discussions and early morning, coffee and bathrobed pacing, and contrasts this with densely assembled, divergent and opaque "investigation" scenes filled with oblique local incident, culture and characters.

Graf slyly hides one police investigation behind another, and similarly hides several melodramatic reveals behind the reminiscence of the friends, which turns on its head (and on itself) when they find out they shared a lover at the same time in their lives many years ago.  All this is shot with a piecemeal approach, finding a great deal of screen tactility to the image and likewise accumulating like a interested tourist the locality's details in passing, almost-mysterious glances, shading the edges of the frame and of the central story with suggestions of stranger things, real histories and a real town, a populace, a great deal of off-screen and suggested texture that Petzold carefully withholds from his film, where you'd hardly know there was a town at all. The film devolves considerably when the investigations fall to the wayside and characters' pasts and secret motivations come to a head, the film calming down considerably, losing that Desplechin﻿-anticness that is able to juggle stories, characters and decor bric-a-brac﻿ with near-manic aplomb. But the layering effect Graf is going for, placing locality, character, psychology, spaces, crimes and corruption all on the same cinematic quilt leaves one with a greater complexity than does the resolution of the story. 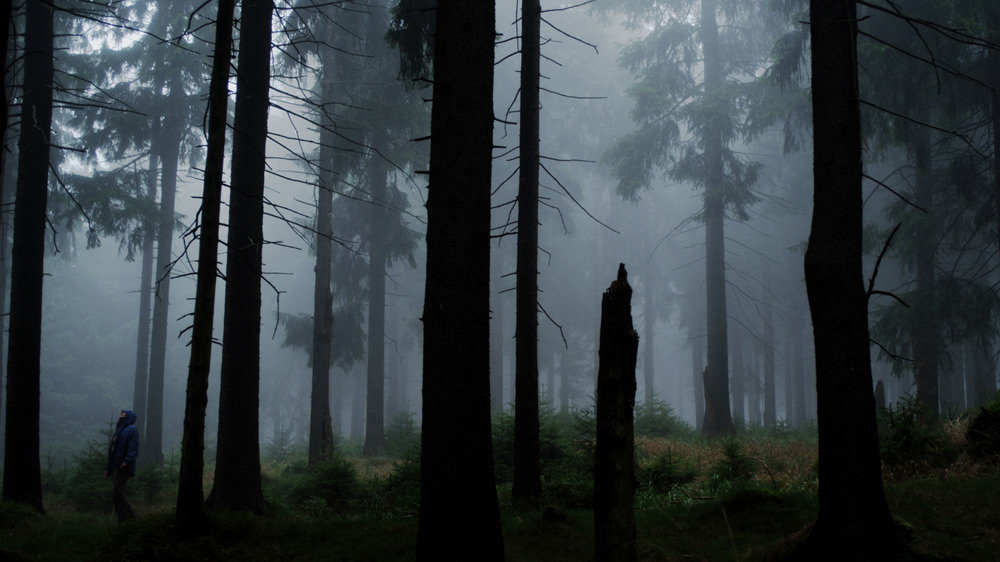 One Minute of Darkness, Hochhäusler﻿﻿'s final entry, gets the short shrift in the set by seemingly being left with settling all the resulting conventional generic tropes scattered on the sidelines of D1 and D2: the psychology and movement of the escaped convict and the psychology and technique of a local investigating detective.  The movements of each are dull, but the visual scope of the film is as expanded with D3 as with the others—we plunge headlong into the forest that lined the paths and buildings of Beats ﻿Being Dead and hugged Don't Follow Me Around.  Details shine, too, in that way that sleek genre films carry with them an evocative glamour in their attention to key, telling elements in a mise-en-scène﻿﻿ optimized for honed storytelling.  The Yves Klein-like blue mountain-tech monochrome of the convict's stolen windbreaker, for example, creates a constant visual element of electricity in the frames; the sluggish, hunched physique of the detective, looking like a suburban, beleaguered William Friedkin, also has a sliding kind of presence—something to help the images move, one to the next, something that's needed due to the uninteresting nature of both the chase and the investigation.

Nevertheless, this hide-and-seek is apparently necessary, because its movement traces a line around the town and around the trilogy, its generic binding, if you will.  The convict's movements through the forest (finding a young girl, as in Frankenstein) and the detective's through the town (scenes with his wife in their home, as well as spending time in the convict's childhood house) thus represent the fairy-tale of mobility and motion in D1 and the residential-domestic aspects of D2. As such, One Minute of Darkness visualizes directly both the sociopathic (and potentially psychopathic) side of the one and the crime-solving psychological clues and manipulation of the other.  Thus despite being the least expressive of the three films, Hochhäusler﻿﻿'s ﻿film seems to pierce through its brethren﻿, and reveal inside them the core generic—and criminal—powers that drive these stories, this town and these films.