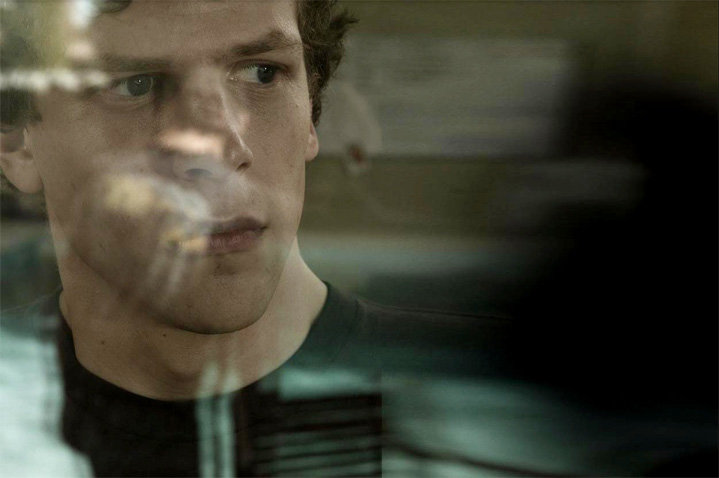 An immaculate realization of clichés, a multi-billion-dollar lawsuit transmuted into a low-stakes male weepie, a bunch of college-movie stereotypes at play in a world of cruelly precise images—that is, hokum presented with such unerring belief in its profundity that the conviction itself becomes profound.

Or, just as accurately, a dead serious, quixotic, funny work of popular art with little to say about modern business or the Internet (except, that is, for the final scene), with overt ambitions, a punny title (it's the characters, not the website, yagetit?) and pat ironies (the CEO of Facebook is friendless!) that has absolutely no reason to redeem itself because its shortcomings form the bases for its strengths. Mark Zuckerberg started a PR campaign a while ago to try and deflect all of the flak he thinks he'll get from this movie's portrayal of him as a manipulative, needy douchebag—but since David Fincher once outlined the four ideal personality traits of a director as belligerence, paranoia, fear of failure and an overwhelming urge to be liked, and since those four traits pretty much sum up The Social Network's take on Zuckerberg, it can be intuited (not just through that statement, but through the film itself) that Fincher's loyalties / sympathies lie not with all of the wronged characters Zuckerberg leaves in his wake, but with the hyperarticulate social monster himself. To put it bluntly: The Social Network, obsessive, so utterly convinced of the brilliance and originality of its corniest ideas (narrative, dramatic, aesthetic) that they become brilliant originals, is the film its main character would make if he didn't know it was about himself. When, in the last scene, Zuckerberg is finally alone with his invention, which is a direct product of his anxieties and flaws, his facial expression is hard to register. Bemusement? Frustration? Boredom? The answer is ambiguous and possibly irrelevant. What matters is, however tenuous the reality of the relationships in the film (everybody's got their facade), he is faced with the petty truth of his life's work.

As Zodiac tackled the problem of making a film about a famously unsolved crime by making the solution irrelevant, The Social Network tackles the problem of making a film about a company that has yet to fall and two lawsuits that have already been settled out of court by flattening the action. For convenience, it depicts the events of Facebook's founding alongside two depositions—one for the Winklevoss twins (Armie Hammer, in a finely-tuned dual role that marks the best and subtlest of Fincher's special effects) and Divya Narendra's (Max Minghella, who acts like his father directed: servicably) intellectual property lawsuit, the other for Eduardo Saverin's (Andrew Garfield) stake in the company—but through Fincher's compulsive focus, the scenes blur together more than intended, and what emerges is a totality of characterization, where actions, instead of tracking the rise and fall of a personality, merely show variations / sides of the same constantly-existing persona. The Social Network features only two scenes in the classical sense: the first is the pre-credits opening, where Zuckerberg (Jesse Eisenberg) lectures his girlfriend over beers at the Thirsty Scholar Pub and is promptly dumped; she explains that he may think it's because he's a nerd, but he should know that it's because he's "an asshole" (and in one of Sorkin's many attempts to turn Zuckerberg into Charles Foster Kane, Jr., that word—and the question of whether Zuckerberg is really all that bad or whether it's all a front—becomes his mawkish Rosebud). Eisenberg may be a second-rate Michael Cera, but he's a first-rate actor; though he often seems to be taking Cera's leftover roles (see: Zombieland), his range is greater than just Cera's uniform sweetness (dream project: Marx Brothers biopic, with double dual roles—Cera as Zeppo and Harpo, Eisenberg as Groucho and Chico). Like the other great slouchy actors (Thomas Jay Ryan, Michel Lonsdale, Walter Matthau), he's got a bad case of bitterness, as though his poor posture is the result of the world pressing down on his shoulders.

The second "conventional" scene comes directly after the credits. It tracks the rest of the evening, complete with silly little time-stamps: Zuckerberg drinks into the night, blogging angrily / earnestly while he codes a demeaning website that allows users to rate the women of Harvard. That wordy start and its languid / rigid dialogue-humor pacing makes The Social Network a sort of monstrous Modern Romance (substitute beer for Quaaludes), where, instead of wallowing in self-pity, Albert Brooks' character (whose social faux pas, terminal uncoolness and focus on minutae become debilitating flaws for Eisenberg / Zuckerberg) turns his sense of futility against the world. It's a corny catch-all: the billionaire computer-whiz's ruthlessness is chalked up to an inability to get over getting dumped.

Sorkin's script cuts the rest of the film up into half-chunks of exposition-heavy scenes that bounce off of one another, and Fincher's movie in no way goes against it; in fact, in represents an almost perversely exact realization of a screenplay. Little has been cut, and even less has been altered. Fincher even plays along with Sorkin's Kane game (which involves giving a watered-down take on the William Alland role to Rashida Jones and casting Garfield in a role seemingly intended for the exhumed bones of Joseph Cotten) by one-upping the dolly-in through the night club sign with a crane-back through a dance club's CGI handrail. The movie's about 50% montage sequences, and the menace of the tinkling / pulsating synth score, which is used throughout the film to link all of those intercut scenes together, makes Zuckerberg and Co.'s actions seem conspiratorial (in an icy '80s thriller sort of way) and makes it sound as if, wherever they are, there's a party going on to which the characters are not invited. In other words, Zuckerberg's overlapping obsessions, twinned and feeding on one another, like the Winklevoss brothers who end up suing him: intrigue (the suspicion of conspiracies against himself, fed by his associate Sean Parker's paranoia, and his own matter-of-fact habit of conspiring against others) and exclusion (the fear of being excluded which comes from his yearning to exclude).

Zodiac was the story of one obsession, and The Social Network is the story of several, though it's not always clear where one obsession ends and the next begins. In Zodiac, the obsession of the detectives, amateur and professional, eventually became more important than the crime itself and turned into something like a shared work of art. In The Social Network, a movie about people trying to get their hands on money, the motivations overpower the money until the sums in question become unimportant (it's therefore no letdown when the title cards at the end inform us that many of the settlements remain undisclosed). The motivations: emotion (Saverin), business (Narendra), aristocratic honor (the Winklevosses), paranoia (Parker, played by Justin Timberlake as a cross between Bama Dillert and Job). On its own, it's a breezy, entertaining yarn, paced like a good TV movie. But what defines Fincher's direction in The Social Network is a fidelity to the letter of the script, but not its spirit. It takes a certain ironic distance to write a drama out of the founding of Facebook; that same ironic distance seems unimagineable coming from a director who shoots a movie that consists mostly of young men in hoodies, cargo shorts and flip-flops sitting in anonymous rooms (Old Money Brown in the first half, Silicon Valley White in the second) in plasticine, precise 4K. Perhaps this is because, while to a storyteller like Sorkin, Zuckerberg is an interesting character, to Fincher, he's a kindred spirit.

Fincher 1) does not believe that that filmmaking merely consistutes a series of aesthetic choices and 2) must therefore believe, unlike most of his peers, that some moral truth exists, however hokey. And whereas Sorkin has sided with the truth of the legal record (wherever Zuckerberg settled out of court must be where he went wrong), Fincher sides with the possibly-nonexistent "truth of the image." With the exception of a few rowing scenes, The Social Network has even less in the way of spectacle than Zodiac and underplays its climax, yet Fincher, ever the neurotic artist, treats the movie as if he's been comissioned to paint an altar: as though, with sufficient detail, he will find an absolute truth in this story of bickering Harvard boys and the girls they can't get over. The moral of Zodiac: messy, contradictory truth is found in the search for the unattainable neat, simple truth. So you already know that Fincher's search for this "grand truth" is a failure, but what results are dozens of crystal-clear petty truths (about people, specifically people trying to impress each other, and about the way those people pin their problems and ambitions on others) that spring forth from the contrivances, coincidences and endless montage sequences. Or (again): Hollywood, as always, is more concerned with "big issues" than its independent counterparts, and in this completely mercenary ("Everybody uses Facebook—this movie'll make a fortune!") and entertaining corporate thriller full of stereotypes there's more thought about ordinary people than in most films that are ostensibly about "ordinary people." To put it bluntly: find me a young American indie director that believes this firmly in anything, even if it's the nonexistence of absolutes.