We at MUBI think that celebrating the films of 2010 should be a celebration of film viewing in 2010.  Since all film and video is "old" one way or another, we present Out of a Past, a small (re-) collection of some of our favorite of 2010's retrospective viewings. 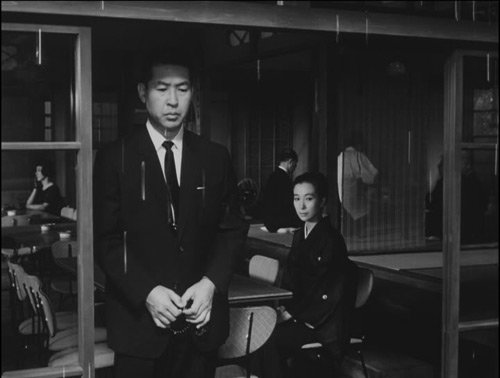 In chronological order, and chosen rather arbitrarily:

The Norrtull Gang (Per Lindberg, 1923).  An extraordinary experiment in importing literature into cinema, a confirmation of Edgardo Cozarinsky's lonely advocacy of director Per Lindberg, and a major work that has slipped through the cracks of film history.

The Stranger Within a Woman (Mikio Naruse, 1966), pictured above.  How is it that Naruse and Chabrol, two of the cinema's greatest directors, could have faithfully adapted the same novel (Eduard Atiyah's 1951 The Thin Line, filmed by Chabrol in 1971 as Just Before Nightfall) within five years of each other without film scholarship having noted it?  One of the most brilliant of the Naruse films that were left out of the 1985 and 2005 touring retrospectives.

Boys (Nils Malmros, 1977).  A masterpiece to put alongside Malmros's stunning 1981 Tree of Knowledge.  Malmros and co-writer Frederick Cryer's power to evoke childhood feelings and behavior is uncanny, and at least partly related to their willingness to ignore comforting adult assumptions about the workings of children's minds.

Amoureuse [Lover] (Jacques Doillon, 1992). A typically intense audience with the extraordinary Monsieur Doillon, who commandeers the cinema in the name of his fantasies of life lived at the edge of emotional rapture and collapse.

The King of Escape (Alain Guiraudie, 2009).  I could as easily have named Guiraudie's 1994 short Tout Droit Jusqu'au Matin, also seen in 2010.  Guiraudie is a great filmmaker masquerading as a niche artist: ranging outside most filmgoers' taste in sexual expression and class identification, he effortlessly fuses surrealism and social observation, goofy comedy and sober philosophical perspective.