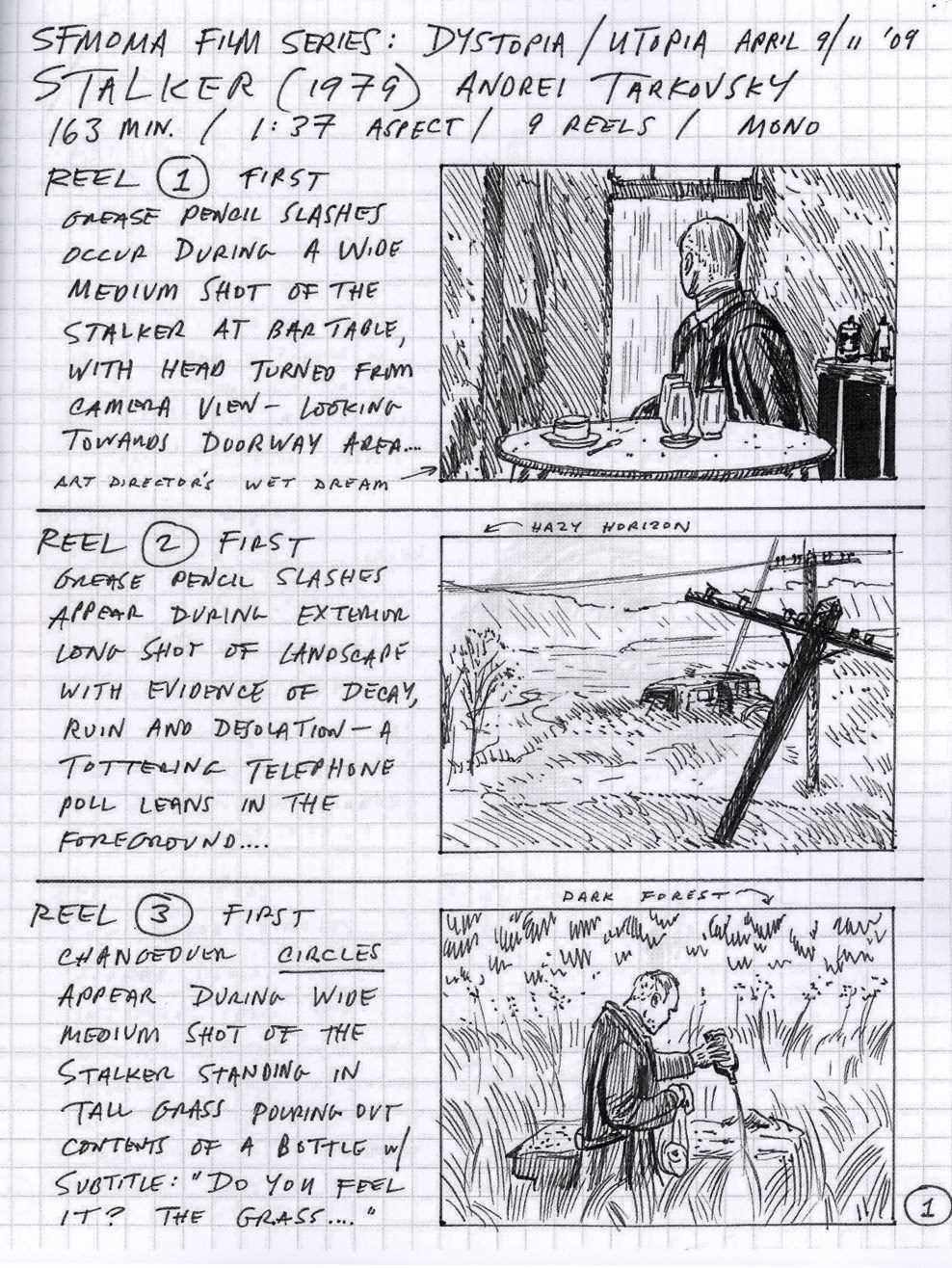 We wanted to give a heads-up for an exciting new publication by filmmaker, projectionist, and Notebook contributor Paul Clipson. Published by LAND AND SEA, REEL is a limited edition "287 page book collecting approximately 15 years of drawings and notes from his job as head projectionist/av tech at SFMoMA. The drawings illustrate the moment before the "cigarette burn" (a symbol used in film projection to indicate when to change the reel of film) shows as a reference intended to assist part-time projectionists."

Only 100 copies will be available, with 5 "artist edition" versions, which come with a DVD Clipson has made for this release of "cigarette" moments, a dust jacket of film stills, and a signed and numbered slip case. More information can be found here.

Paul was gracious enough to share the introduction to his book, as well as drawings for Stalker, Ali: Fear Eats the Soul, and The Long Goodbye with us. 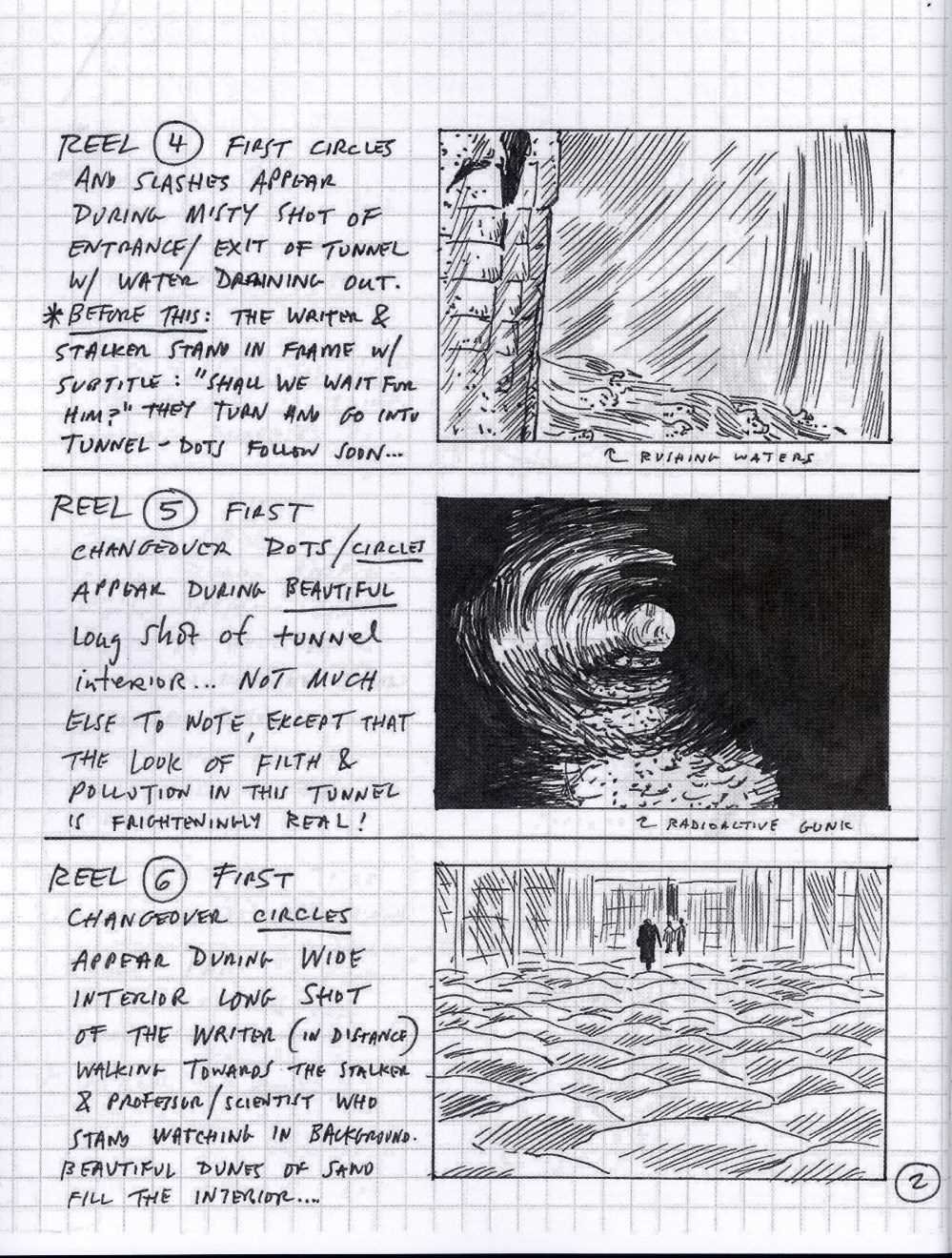 This book is a collection of drawn and written notes describing brief moments from an assortment of films, moments that were meant to be unseen, to pass by unnoticed. The films were screened at the San Francisco Museum of Modern Art between 1999 and 2013, are collected here in alphabetical order, and bear various thematic, authorial and historical connections relating to the screening programs that the museum presented during this time. All of the films were projected on 35mm film, and the descriptions relate to very specific elements unique only to 35mm film exhibition. To the best of my knowledge, there have never been notes of this kind before. 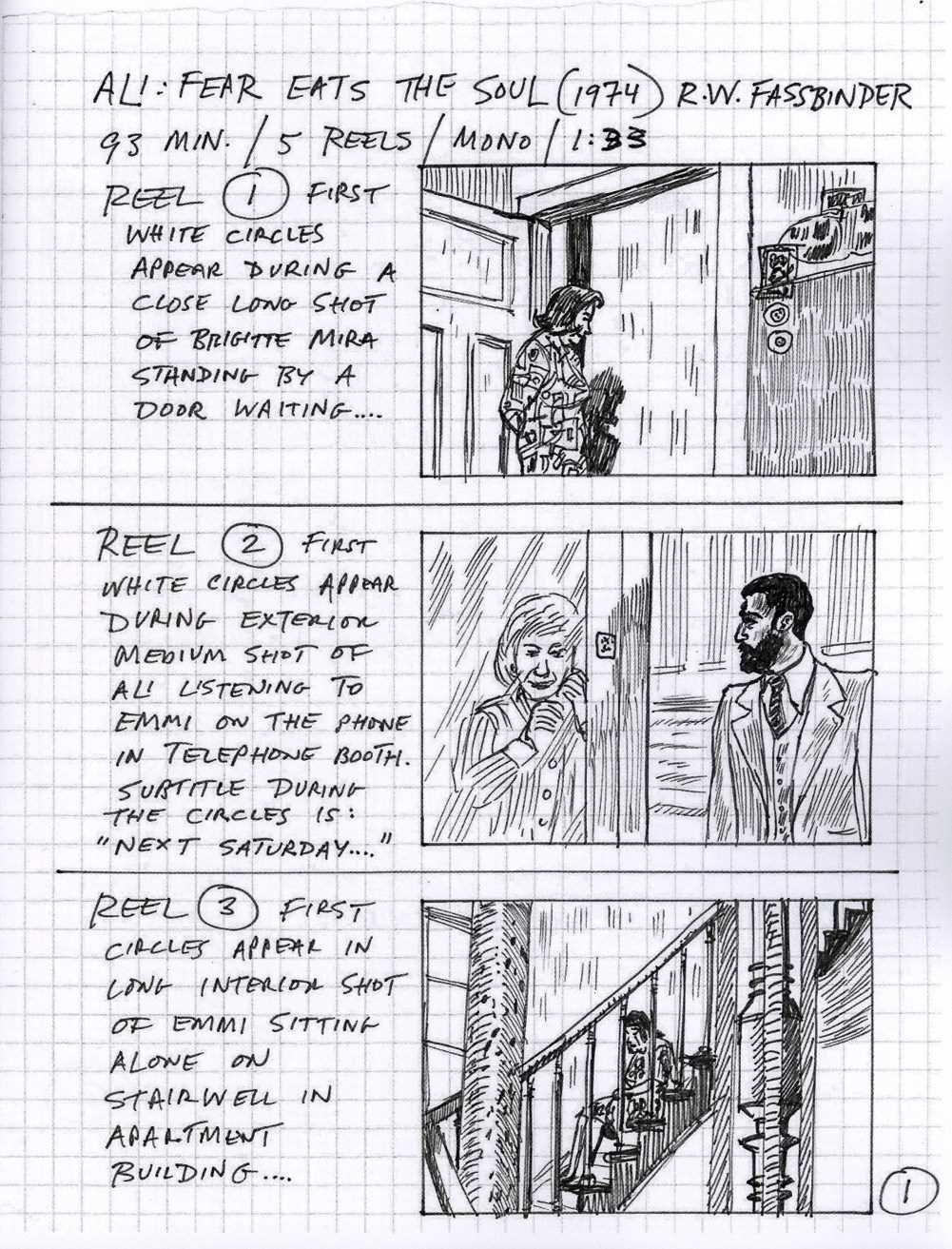 In 1999, I began working as a full-time audio-visual technician and projectionist in the Wattis Theatre at SFMOMA. One of my duties was to project 16mm and 35mm film prints for various museum programs and special events. I would also inspect the condition of films, to confirm they were ready and safe to screen, often making note of any damage to the films, like torn sprockets or messy tape splices. Frequently, I would prepare film prints for other part-time projectionists to screen during evening shifts.

Traditional film projection is a very specialized art, and SFMOMA has a long and rich history of film programming dating back to Frank Stauffacher’s seminal Art in Cinema series in the 1940’s. In the late 90’s, however, the museum’s screenings were less frequent. Unlike other museums and movie theaters, where films prints were often screened daily, during this period SFMOMA typically showed only a few films a year. This posed practical problems for training on-call projectionists, who had other jobs besides projecting film. A part-time projectionist might be called on to project a particular 35mm film one evening and then not project another film for several months.

While most movie theatres now screen “film” via digital projectors, 35mm film projection is still prevalent in archives, museums, festivals, cooperatives, and micro cinemas. But it’s becoming an ever specialized and unique art, and will become even more so as film becomes more rare to screen.

35mm screenings at SFMOMA utilize a two-projector changeover system. This is a labor-intensive but film-friendly screening process, compared to the more streamlined platter projection system favored by multiplexes (and used before the transition to digital) where film is screened in one large reel without breaks. With a change-over system, a complete film is shown in a series roughly twenty minute sections, stored and shipped on metal or plastic reels. A two hour film, for example, can mean as many as six reels have to be prepped, threaded, started, stopped and switched back and forth between two projectors so as to appear seamless to an audience. In order for a projectionist to know when to begin and end each corresponding reel, a set of changeover signals (such as dots, circles, or in some cases holes) appear on the film. This happens during the last several seconds of each reel as a way to alert the projectionist to the upcoming changeover. Exactly seven seconds after the first set of dots appear, a second set of dots follows, whereby the projectionist performs the changeover. Each changeover occurs from a switch that douses (darkens) the end of the first projector's reel, and then simultaneously undouses the second projector with the beginning of the next reel.  If all goes well, the audience doesn’t notice this transition and the film continues uninterrupted. This process is repeated for as many reels as there are for a given film, and requires a high degree of attention and care from a physically present projectionist.

One of the main challenges for a projectionist to successfully perform a changeover is to spot the two sets of changeover dots when they appear on the film. These marks are only present on four frames of film (24 frames equals one second of film, meaning they are only visible for one sixth of a second). It’s very easy to blink while waiting to see them and miss the dots. If this happens, it means the second projector will start late and there'll be a gap between reels (with black, countdowns and audible pops on the soundtrack - not pretty!). 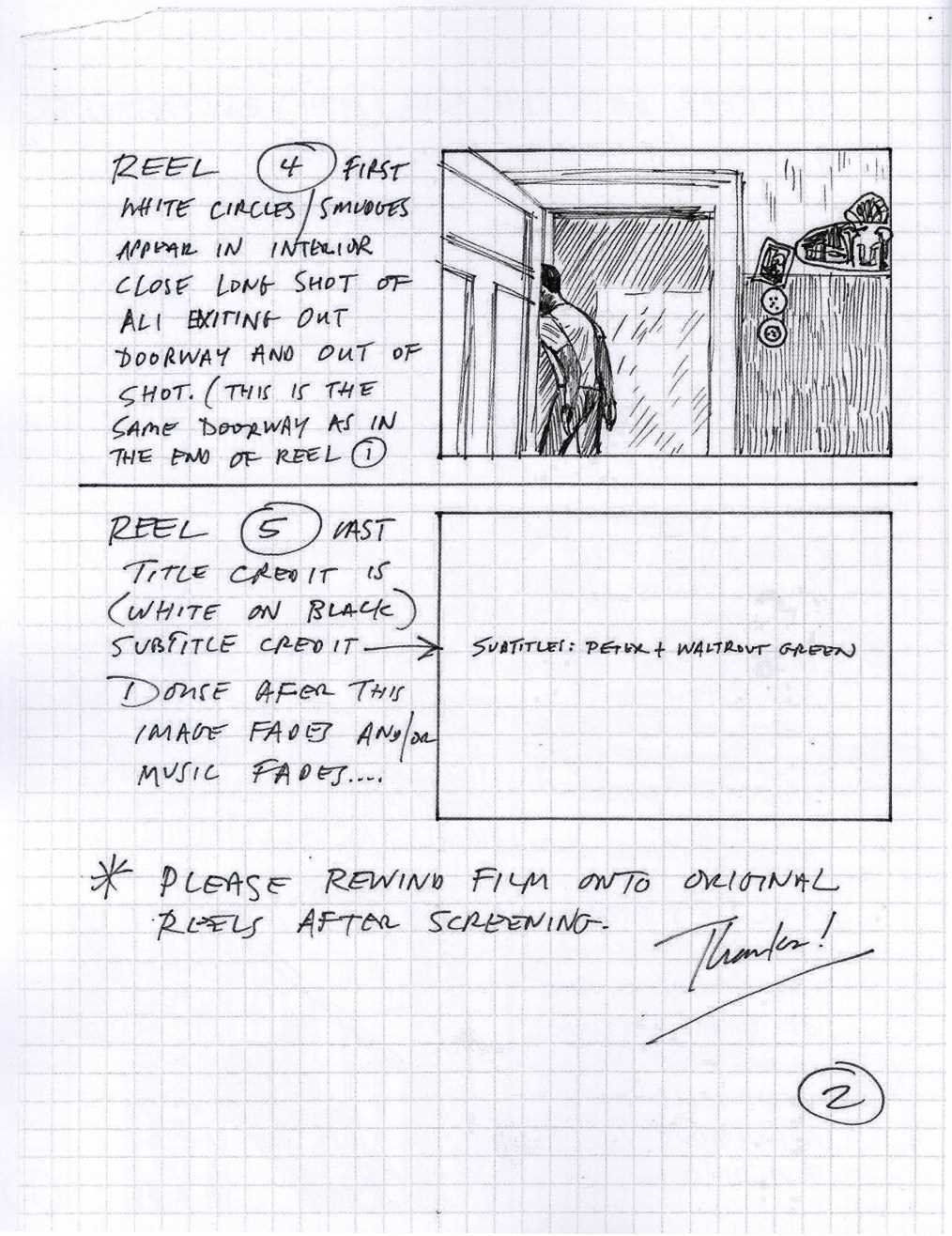 Certainly the task of performing a changeover is one of the most basic of specialized skills that any film projectionist knows, being roughly the equivalent of driving a stick-shift car. With this in mind, I soon became concerned that the on-call AV staff didn’t have enough practice projecting films only once or twice a year in order to have the same precision and skill as a full-time projectionist. My solution was to make screening notes, describing in as much detail as possible the visual and audio elements happening in the film right before the first changeover markings would appear. As I was inspecting the films before each screening, I had access to the ends of every reel and would carefully review these frames magnified through a photographer’s loop. I’d quickly draw a frame, in roughly the correct aspect ratio of the film (1:37, 1:66, 1:85, or 2:35) and render the image as clearly as possible. To the left of the frame, I’d describe in words as much information as relevant to the moment leading up the first changeover marks, such as if someone was opening or closing a door, etc. As I’d not seen some of the films screened beforehand, and was only viewing single frames magnified under a lens, it was sometimes difficult to describe exactly what was happening. Often after seeing the film projected, I would realize I’d miss-described the moments of these changeovers. I’d see that a door was opening, not closing, or see dark blood on a man’s face where it was actually the shadow of a cigarette in high contrast black & white (as in John Cassavetes’ Shadows for example.) But rather than becoming discouraged, these ambiguities inspired me to take more care and add more detail to my drawings and descriptions.  Once completed, these notes would be copied and left for the projectionist before each screening.

As a Bay Area filmmaker who still shoots and projects films on Super 8 and 16mm, I would describe my expertise as a film projectionist to be based on acute levels of worry, paranoia and fear, rather than on technical knowledge.  Perhaps in the handling and preparations for film screenings that I often didn’t project myself, the point of the notes and descriptions collected in this book were attempts to respond in some way to an art form and projection technology that I still find completely mystifying and magical. 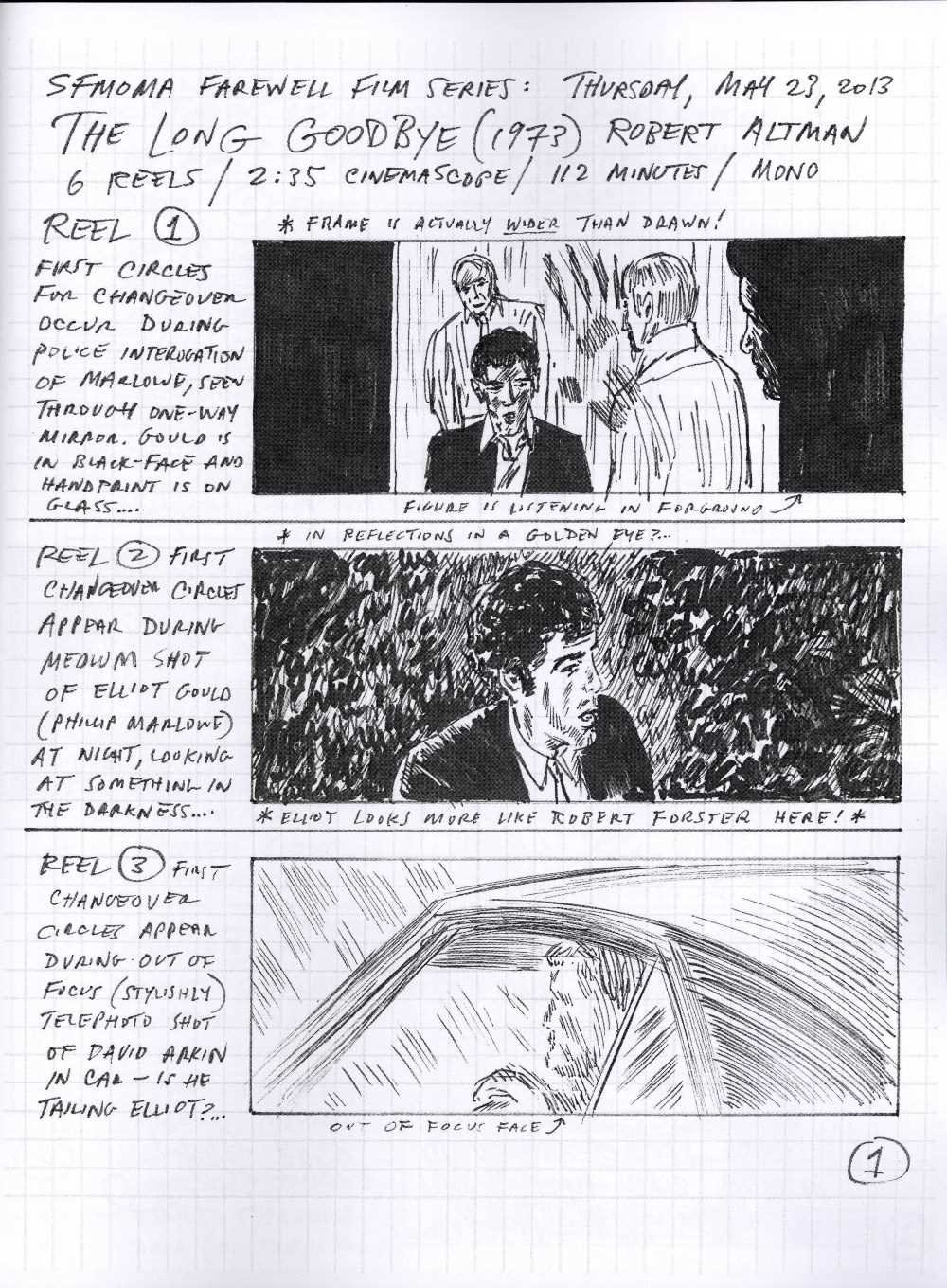 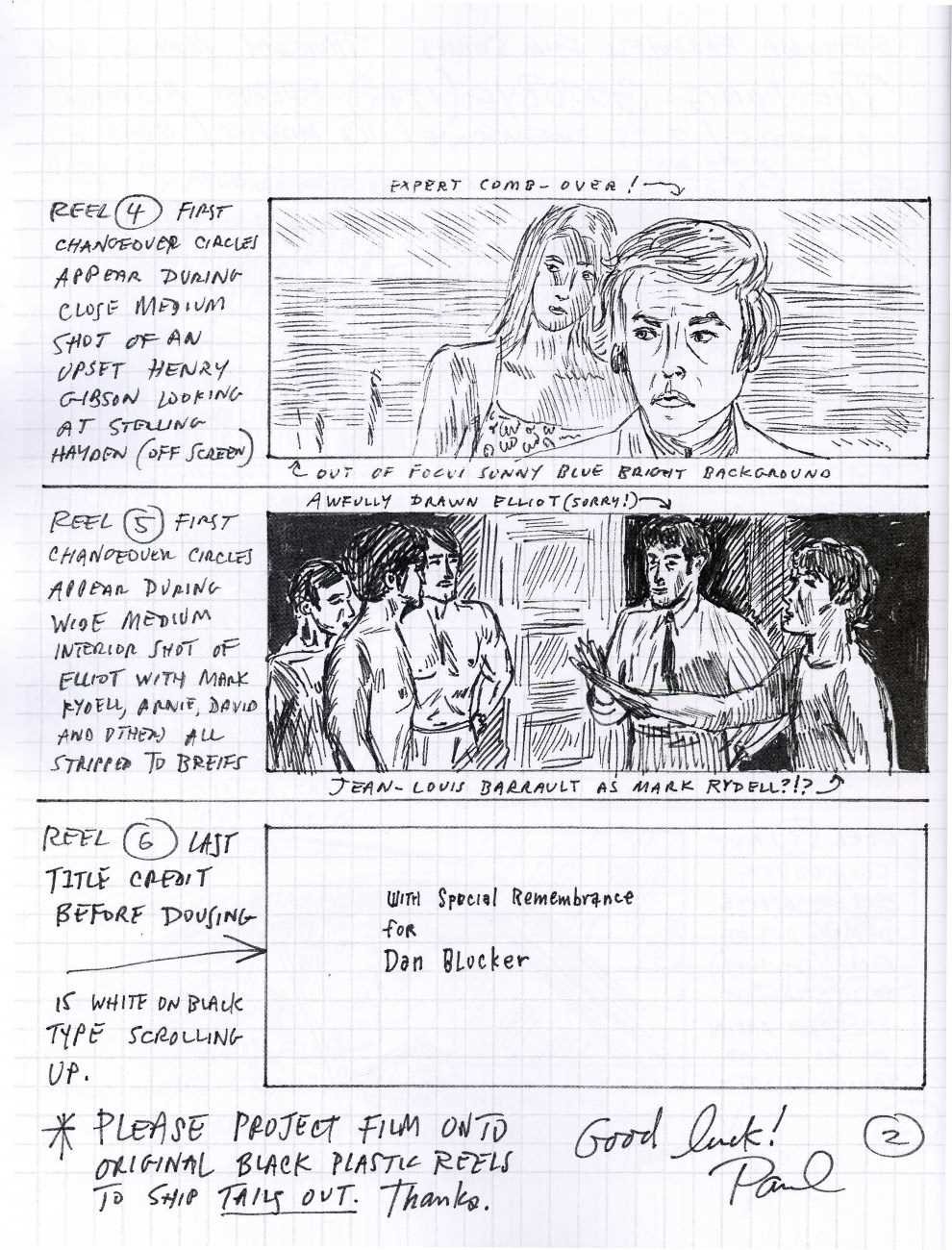