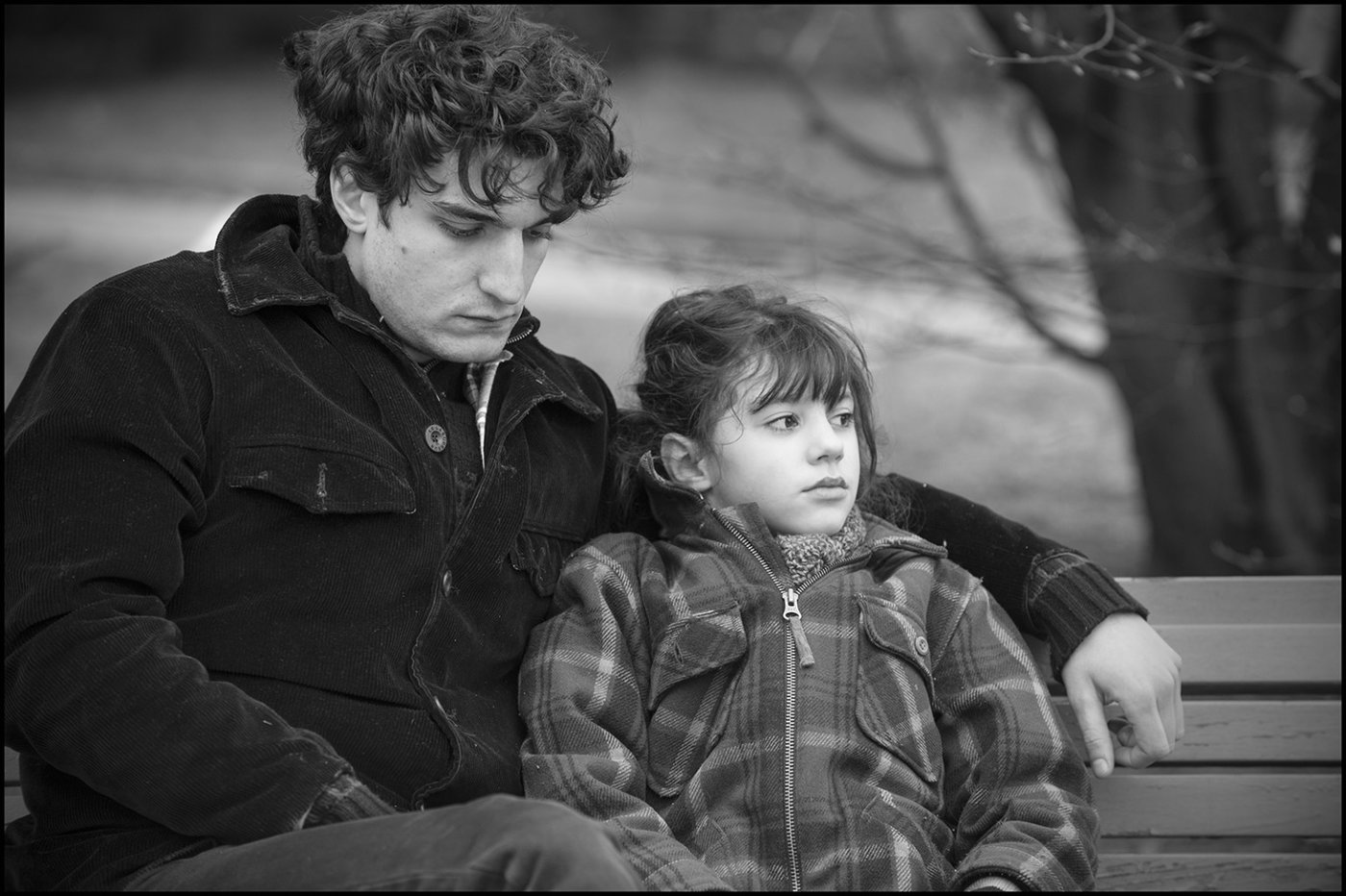 ﻿It's been two years on the dot since Maurice Garrel and his grandson Louis were last paired on screen in the criminally misunderstood Un été brûlant, an elaborate treatise on authenticity and imitation, as well as on experience and its reluctance to be imparted. In the film's final scene, Philippe Garrel bestows a generous gift on the medium as such when Maurice's ghost visits the dying youth in a hospital room to tell stories about his involvement in the Resistance and miraculous survival on the battlefield. The actor died shortly before the film was completed. Basking in the bright sunshine, the old man, all pigment spots and with an incessant tick, is playing the part of a dead man, all the while professing his love of life.

La jalousie (Jealousy) finds Louis Garrel back in the hospital where he lies motionless, oxygen mask over his face, recovering from a failed suicide attempt. The fact that the setting is borrowed directly from Un été brûlant makes Maurice Garrel's absence particularly painful: the idea behind La jalousie was for Louis, 30 years old, to play his grandfather at this age, much like he had played his father ten years prior in Les amants réguliers (2005). This spellbinding grip on the passage of time, practicable only in the realm of cinema, allows the filmmaker to revisit the same situations at different moments. Similarly, Serge Daney, a critic whose support was always important for Garrel, once wrote that there is special kind of films: films that watch us.

In Les amants réguliers, Philippe Garrel tried to reconstruct from memory Actua I, a short he had made in 1968 on the barricades (it had been presumed lost until last year). La jalousie is a remake of his sophomore directorial effort, Droit de visite (1965), made at 17 and based largely on his own childhood memories when his stage actor father left his mother for another woman. Now, in the prologue, we see a woman's face followed by a fade-out; then a little girl lying on a bed and spying on adults through a keyhole. A woman asks not to leave her. A man walks out.

At a modest 77 minutes, La jalousie is one of Garrel's shortest features, a small-scale project he undertook after the funding fell through for his ambitious, long-in-the-works follow-up to Un été brûlant, which was supposed to be made at Cinecitta starring Monica Bellucci and Michel Piccoli. Split into two chapters, "I Kept the Angels" and "Sparks in a Powder Keg," La jalousie﻿ is also Garrel's quietest and most serene in at least 20 years. The plot, however, is liberally dredged with omens: we hear the names of Mayakovsky and Seneca, who both took their own lives; The Sorrows of Young Werther is invoked; Louis' new girlfriend, played by the inimitably husky-voiced Anna Mouglalis, says things like “﻿this apartment will be the death of us”﻿ and “waiting is death,” while the protagonist's sister, played by the actor's real-life sister Esther, talks about the fire that once scared her so. Even though Garrel's devotees are aware of his characters' fragility, their tragic potential for the first time in years remains unrealized and the protagonist, despite the wealth of portentous events, pulls through in yet another autobiographical detail: Maurice Garrel, indeed, once tried to commit suicide exactly the same way.

The film's melancholy mood is manifest in understated slices of life rather than near-death experiences or grand romantic gestures of any kind. The titular feeling is the thread that links all the characters together as the girl's mother, visibly disgruntled, listens to the girl admit that she likes her father's new girlfriend quite a lot. Consumed with jealousy herself, Mouglalis' character passes it on to Louis suggesting they move into the apartment one of her exes gave her. Louis asks his daughter outright, "Are you jealous of me?"

The sad motif coursing through the film is that of dreams deferred, aspirations abandoned, and ideals crushed. As another terrible day at the office draws to a close, the little girl's mother reminds Louis that it seems like yesterday they were dreaming of only doing the things they liked. He does remember, though; that's why he at one point states, "I know who I am." In fact, this knowledge defines him in full; it is for this knowledge alone that he's willing to sacrifice his family and starve. The pattern continues as his new girlfriend, just like the previous one, finally gives up after a six-year unavailing search for an acting job. She simply doesn't fit in, whether on stage or in real life, sometimes literally bumping into furniture, unable to cope with their top-floor apartment's cramped space. The ascetic interiors are captured in widescreen, black and white 35 mm ("The only luxury to which I have access," the filmmaker admits in an interview) by Willy Kurant, Garrel's second-time collaborator and one of the last surviving keepers of the New Wave secrets—the ones he has learned from working with Godard and Pialat. As is usually the case with Garrel, the score adds nuance to what we see unfold on the screen: this time around, the credit goes to Jean-Louis Aubert, a household name in France whose latest album, Roc’éclair, is also dedicated to his recently deceased father (on the end credits plays his sublime song Ouvre ton coeur).

The first part of the film comprises nothing but flashes of simple happiness. Comfortably shacking up with a new girlfriend, Louis stays busy in the theatre and keeps his daughter invariably amused by racing her, stealing lollipops, and taking long walks in a park populated by dainty swans. The tone of these scenes is that of harmonious, caring warmth the characters share, the father asking the daughter if she's cold three times in a row. Garrel makes no secret of identifying with this amazing little girl whom he first spotted in a movie Un enfant de toi (You, Me and Us) by his longtime friend, Jacques Doillon. The all-embracing tranquility is evident even in the set design, what with a rhino on a dresser, kitten wallpaper in the nursery, and an afternoon game of "flying carpet." It is a film shot from the child's point of view.

Whereas "I Kept the Angels" seizes the day, rooted in the intensity of first-hand experience, "Sparks in a Powder Keg" delves deeper into memories. Louis lets Esther in on the "law of the desert," according to which you ought to put up a stranger in your tent for three days and three nights, but then they have to leave. She asks who told him this story. "My Dad," he replies. In a particularly poignant moment, the siblings' affectionate conversation is interrupted by the realization that they can't share this memory, because Esther was too young to remember their father.

Freely alternating between such dulcet, unhurried sequences and sudden accelerations, Garrel sends his protagonist to sleep at the dressing-room vanity table near the mirror, which looks like Jean Cocteau’s portal. Suddenly a female apparition steps in through the frame. The girl tells him she used to love his father, and loves him still. Even though Maurice Garrel rarely landed big parts in his son's films, his presence was always of crucial importance: when in a bind, the main characters of Les baisers de secours (1989), Le coeur fantôme (1996), and Sauvage innocence (2001) without fail turned to their fathers for advice.

Albeit staged like another dreamlike invasion, there is a similar scene in La jalousie, too, when Louis sits across the table from an elderly man, backgrounded against a bizarre, snow-topped garden we see through the window. A dream of meeting his father or a memory of him, the filmmaker himself claims it is a nod to his mentor/schoolteacher, whom we, presumably, have already met in Garrel's debut Les enfants désaccordés (1964). The scene is mirrored in Anna Mouglalis' visit to her symbolic father figure, an aging writer and Mayakovsky's biographer, whose feet she washes in a basin. Both of the old men are played by Maurice Garrel's friends; Louis, likewise, spends a lot of time hanging out with two of his theatre buddies. Therefore, these actors play the parts of the people we see in the film.

The teacher warns his pupil against conflating truth and fiction, since it's easier for him to relate to literary phantoms than real people. In this hazy uncertainty lies the very essence of Garrel's method, the heart of his cinema, as he doesn't even invent names for his children's characters, Louis and Esther. From this duality springs forth the entangled beauty of the movie, which couples a loving dance of reality and fantasy, autobiography and script. Modeled simultaneously after his father, grandfather, and himself, Louis deals with the same issues of similarity and distinction that beset the protagonists of Le vent de la nuit and Un été brûlant.

What a strange, enchanting idea it is to produce a remake of a man, not just a movie; to search the face of someone you love for traces of someone else. The little girl asks Anna Mouglalis if she knows whom Louis loves the most. The answer is: his Dad. It is apparent that in La jalousie Philippe Garrel, too, loves his father the most—as preserved in his own son. In the last scene, the girl interrogates Louis, "What were you doing before I was born?" The film answers a different question. What to do after you're gone? Can one find his father in a trove of images, in their succession, in the cinematic space in general? Is it possible to regain—or recreate—your father on screen? His unseen father lost forever in a concentration camp, Serge Daney kept looking for him and his trace in the movies, because a film critic can do nothing else. So what is a film director to do, then? Why, make movies, of course.

Translated by Anton Svynarenko.
Thanks to Nanako Tsukidate.