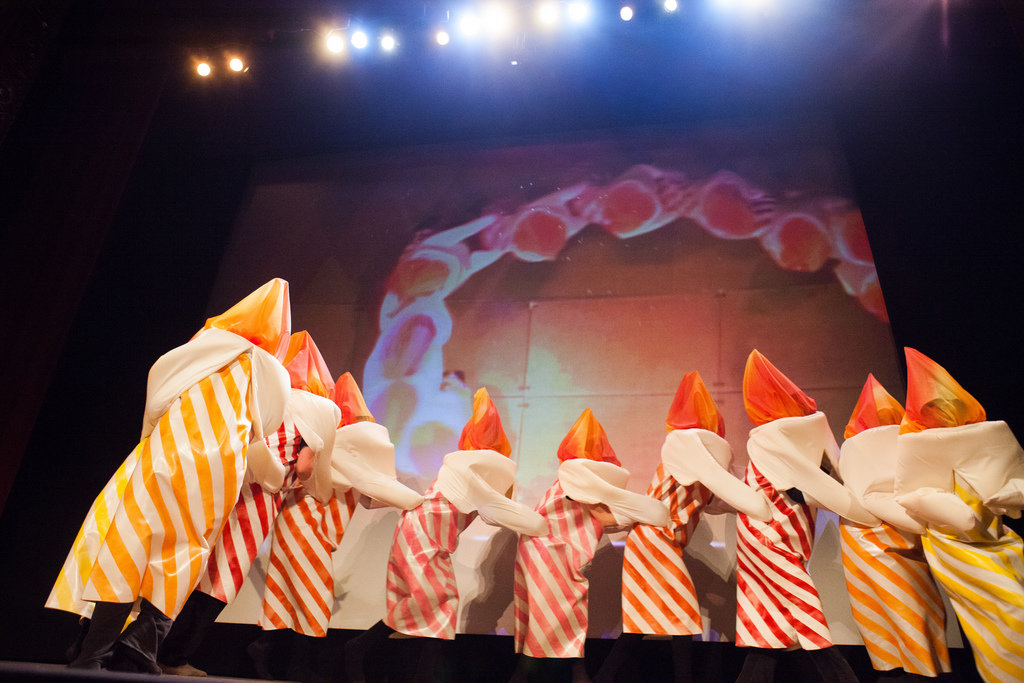 This year marked the 50th anniversary of the Ann Arbor Film Festival, which would be a milestone for any cinema-related event in the U.S. But for a festival that has carved out a niche in the area of experimental and avant-garde film and video, AAFF's achievement is especially noteworthy. Even within the rarefied realm of cinephilia, the avant-garde tends to be something on the margins, or even in the best of circumstances (e.g., the Rotterdam, New York, or Toronto film festivals) one part of a much larger whole. So the fact that Ann Arbor and its intrepid citizens have continued to support this strange little festival, and all the bizarre films the festival has thrown their way over the years, speaks very highly of both the town and the festival founders and organizers (many of whom were present for an on-stage birthday ceremony, dressed as candles and performing a sort of Busby Berkeley dance configuration).

In observance of the 50th, executive director Donald Harrison and program director David Dinnell made the bold and welcome move of placing nearly equal emphasis on retrospective screenings and highlighting new work. One of the ways they did this was to include classic experimental and / or narrative shorts within the competition programs, interspersed among the newer films and videos. This not only helped place the current work in unexpected and in many cases edifying perspective; in many cases it provided the chance to see great films from the festival's past which have been all too rarely revisited in the intervening years. Films like Jordan Belson's abstract mandala film Chakra (1972, screened at the 11th AAFF), Greta Snider's skronky ray-o-gram Flight (1997, screened at the 36th AAFF), or Arthur Lipsett's found-footage horror film 21-87 (1964, screened at the 2nd AAFF) are, by any reasonable measure, canonical works. But how long has it been since we'd seen them? By the same token, Dinnell and company took the opportunity to revive early films by notable makers, films such as Gus Van Sant's sharp The Discipline of DE (1978, screened at the 17th AAFF), or Matthew Buckingham's lyrical featurette Amos Fortune Road (1996, screened at the 35th AAFF).

Similarly, competition juror Kathy Geritz, programmer of Berkeley's Pacific Film Archive, was invited to assemble a show of films that had played in the AAFF at some point in its 50-year history. Having eight such films (and, it should be noted, no videos—all glorious 16mm) assembled in one program provided a more than convincing argument for the richness of the AAFF's history and long-time curatorial acumen, as well as the continued vitality of celluloid as a vehicle for images and sounds. Highlights included Braddock, PA's own Tony Buba, represented with his avant-doc short Washing Walls with Mrs. G. (1980), a portrait of his immigrant grandmother; an underseen gem from the Viennese avant-garde entitled Egypt, by Kathrin Resetarits (1997), which explores communication among deaf Austrians and the gaps between European sign language and filmed representation; and Sarabande (2008), one of Nathaniel Dorsky's very greatest works, in which layers of light and shadow are modulated in a play of lightly competing surfaces. 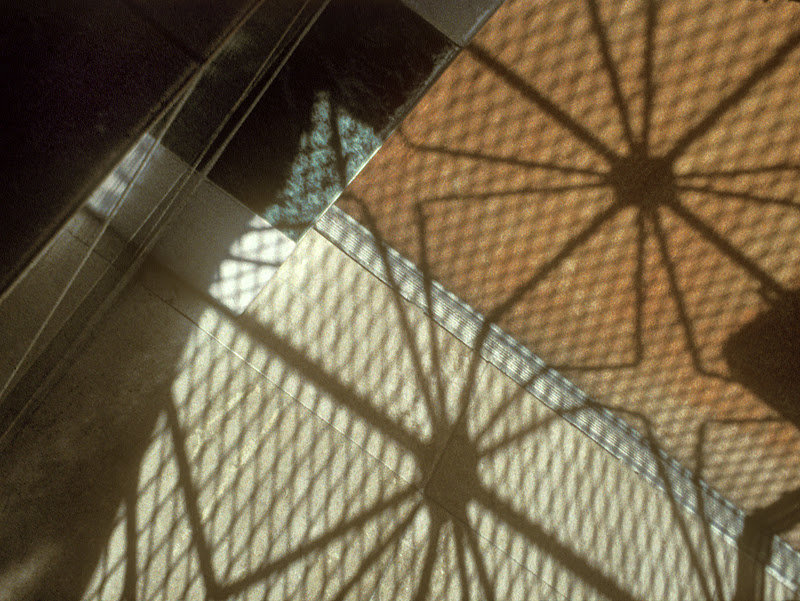 But in this grand spirit of looking back and taking stock of fifty years of experimental film history, two programs at Ann Arbor this year stand out as major contributions to the field of cinema studies. For most of us in attendance, they were revelatory, although in two quite distinct ways. In one case, I and several others had the rare opportunity to immerse ourselves in a strand of filmmaking of which we'd only been vaguely aware. In the other, we had the chance to fully submit en masse to films, and a filmmaker, that we thought we knew well, only to discover how much we still had left to see and hear.

The festival offered the rare, unmissable opportunity to see two full programs of Japanese experimental films and videos, co-curated by Dinnell and leading filmmaker Tomonari Nishikawa (whose gorgeous Tokyo-Ebisu was shown on opening night of the fest). The first program, "Space/Time," presented ten films from the 1970s and 80s. As the title and the timeframe implies, these films tend to share certain concerns with the contemporaneous structural / materialist efforts taking place in the West, although seeing the works in a bundle, certain aesthetic preferences begin to emerge, notably a persistent sound / image divide wherein music or noise accompaniments float along as somewhat separate entities, the camera's motility and the structure of editing providing the artist's primary formal investigation. There is also a continual interest among some makers, such as Isao Kota (Dutch Photos, 1974) and Takashi Ito (Spacy, 1981), to explore the specific collision point between cinema and photography, motion and stillness. This attitude results in the most compelling films, such as Spacy (apparently the towering classic in this bunch, and easy to see why), or Hiroshi Yamazaki's Heliography (1979), which applies tricked-out camera obscura technology to the horizon line, resulting in a cool, raging "sunspot cinema." As for Atman (Toshio Matsumoto, 1975), another major classic in the program, its endless zooming into the face of a woman wearing a demonic Noh mask, and its violent electronic soundtrack, were an admirable but unwelcome blend of Ernie Gehr and Sion Sono. By the end of its 12 minutes, I just wanted my mommy.

Nishikawa and Dinnell's second program, "In Praise of Shadows," featured Japanese film and video from the 1990s and 2000s. Although the Tanizaki title was more aesthetically apposite for some films than others—particularly Takshi Ishida's Gestalt (1999), a canny combination of actually light play and two-dimensional drawing—the program as a whole displayed an impressive array of approaches to visual experimentation in the last two decades. The work on the docket that was most familiar to many of us, Eriko Sonoda's marvelous Garden/ing from 2007, burst onto the scene several years ago with its impish structural play between large-format photos of a recessed backyard window and the actual spatial description of that same space with a video camera. Taking nothing away from Sonoda's brash originality, but the two programs Ann Arbor presented this year helped both to contextualize her work in a manner many Western critics (like me) sorely needed, and to clarify just how intelligently she has expanded on the vocabulary of forebears such as Ito, Kota, Matsumoto, and Shiho Kano (Still, 1999). All in attendance agreed that Dinnell and Nishikawa had truly provided a service, and they deserve our thanks for expanding our frame of reference.

The major event at AAFF 50, however, was a complete retrospective of the films of San Francisco Bay Area legend and Canyon Cinema / SF Cinematheque founder Bruce Baillie. Baillie, usually too ill to travel, made a rare festival appearance for the occasion, going so far as to introduce one set of screenings with a detailed synopsis of one of his favorite "Seinfeld" episodes. Suffice to say, the man is full of surprises. And, as I said above, Ann Arbor's other major retrospective program was a crucial chance to re-engage with a history that so many of us thought we knew well. Of course it is never less than a treat to see old-friend films like Castro Street and All My Life (both 1966) on the big screen, in lovely preservation prints. But having the chance to imbibe the Baillie Project all at once, to witness its breadth and evolution, is an experience of the purest pleasure and deepest intellectual engagement. As Chuck Stephens recently observed in Cinema Scope Magazine, Baillie may well be the avant-garde's all-time greatest sound designer. The sensitive sociopolitical listening involved in his more complex, engaged works, such as To Parsifal (1963) or his mighty cross-country yawp, Quixote (1965), play exceedingly well against, say, a delicate haiku such as Tung (1966) or the ultra-rare motorbike docu-poem Yellow Horse (1965). But if two works could be said to stand out, and draw even greater power from their grouping amidst Baillie's life's work in cinema, they would be his Mexican filmic ballad, Valentin de las Sierras (1967), a small masterpiece that should be required viewing in any modernist ethnography seminar as a exemplar of ethical, loving depiction; and Quick Billy (1970), Baillie's abstract feature on, among other things, the viability (or not) of the filmmaker as a Western hero (in both senses). 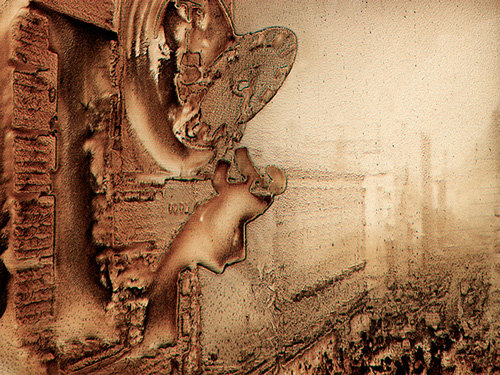 To be sure, Ann Arbor 50 featured a lot of strong new work, too. If I were to single out one absolute triumph, it would be a masterful installation of Phil Solomon's feature-length video triptych American Falls (2010), which, like the Baillie work, dazzles by providing new, unexpected perspectives on images and ideas we thought we knew so well. Solomon's piece, originally commissioned for the rotunda of the Corcoran Gallery in Washington, D.C., is a public artwork in the finest sense, in that it edifies through dialectical argument, moving us from the foundational images of U.S. history—even beginning with popular representations of the Founding Fathers—and moving us right through to the turbulence of the Civil Rights Movement. Solomon subjects the images to his customary pulsating, painterly illumination and woodcut-like texture and turmoil, revoking the commonality of such scenarios (scenes from Greed; the Depression; Eisenhower's final speech) and infusing them once again with the thrust of temporal struggle. In a way, American Falls exemplified the spirit of the festival's bold anniversary year, taking stock not only on how far cinema has taken us, but also on how these transmissions from the past continue to jab at us, not letting us go so easily into some all-digital, skim / scan future. Fifty years on, and these muscular shadows, these insistent whispers, are still not done with us.﻿