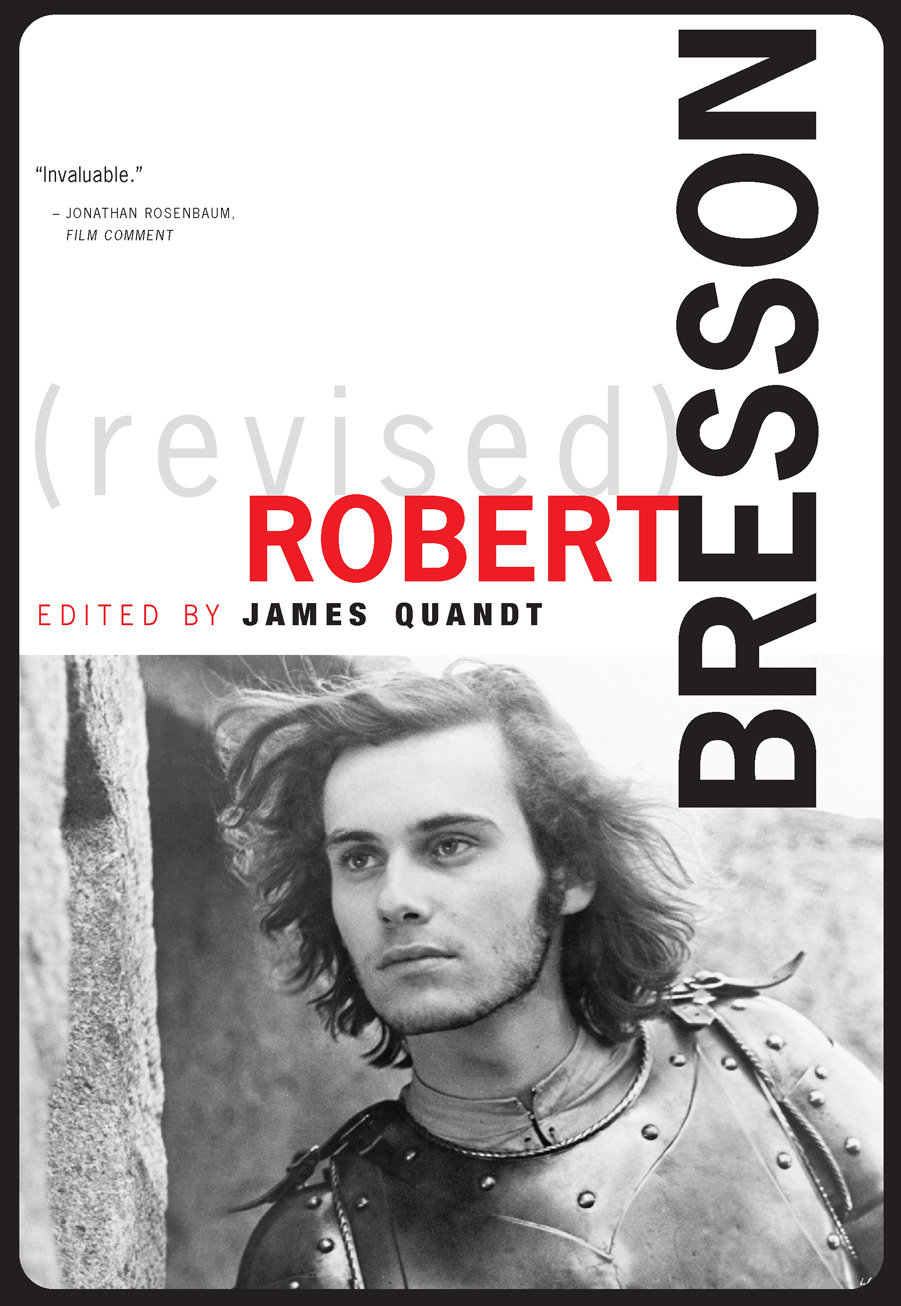 Right now is not a bad time for admirers of Robert Bresson. A traveling retrospective has made its way across numerous cities, and people who'd never gotten a chance to glimpse Four Nights of a Dreamer (1971) now get to watch it on the big screen in a proper print. Furthermore, the critical and cinephilic culture surrounding Bresson's work is probably more alive now than it has been in a long time. Perhaps nowhere is this more evident than the wider interest in (and affection for) the director's late color films, earlier misunderstood and dismissed in some quarters as odd aberrations which lacked the spiritual clarity or asceticism of the black-and-white work. It's for this reason that film culture can welcome a second, revised edition of James Quandt's crucial anthology, Robert Bresson.

There is simply no more essential book of material on Bresson to be found in the English language, unless one counts Notes on the Cinematograph itself. TIFF's Quandt has assembled a substantial tome about a major filmmaker. And because of the traveling retrospective, audiences can have Bresson fresh in the mind while perusing dozens of essays, interviews, and scholarly articles on the filmmaker, his work, and his collaborators.

What has changed in the intervening thirteen or fourteen years since the original's publication? For starters, as Quandt notes in his introduction, more people seem to be drawn to the extremes of Bresson's oeuvre. This refers to the early and late periods in his filmography (Public Affairs, Les anges du péché, Les dames du Bois de Boulogne and then the late color works), but also to the ways that a deeper consideration of these titles may have caused some of his admirers to recast their conceptions about how Bresson would use formal elements like sound or cutting. Let me state outright that I find such revisionism encouraging. Throughout the pieces of this book are traditional high cultural touchstones (Dostoyevsky﻿, Vermeer) but also low cultural ones—like Kassagi the thief. A number of pieces adopt the tone that I, for one, identify as especially appropriate for Bresson criticism: engaged, deeply respectful, but not reverential—instead a bit freewheeling, associative, ambulatory (Moullet's, Daney's). Quandt summarizes it at one point: “A conspicuous, somewhat controversial, development has been the decided shift away from traditional modes of interpreting Bresson, as a spiritual, Christian, or 'transcendental' artist, toward a more materialist approach.”

What new or challenging “materialist” meanings could be teased out of the work of this singular filmmaker? Brian Price, author of the recent and excellent book Neither God Nor Master: Robert Bresson & Radical Politics (University of Minnesota Press, 2011), contributes to the roundtable discussion in this volume with Quandt, Jonathan Rosenbaum, Kent Jones, Daniel Morgan, and Nicole Brenez, arguing for an interpretive framework that acknowledges Bresson's forms of social engagement. Filmmaker Mark Rappaport is also a truly remarkable critic, whose sharp eye has few peers. (Example: “The Secret Life of Objects,” in Rouge.) His reading of (homo)eroticism in Pickpocket is a remarkable examination of an aspect of some of Bresson's work that may not appear obvious to all viewers—but which, once pointed out, becomes impossible not to see. Such attentive readings of the work as Price and Rappaport offer may go against the grain of decades of more ecumenical interpretations of Bresson. Yet, they make fascinating films even more fascinating—more alive, more unpredictable. This is not at all a case of standards-free academicism tearing up the sacred aestheticism of modern cinema's masterpieces. As much as Bresson is an artist interested in problems of faith, morality, or duty, he is also an artist who dealt with mud and dingy apartments and petty vengeance, with culture, with youth, with state politics. It is just that he dealt with him in his own way; this is why the “revisionist” criticism and scholarship are so valuable.

Other contributions for this revised edition include material by Jean-Michel Frodon (also on eroticism), poet Robert Creeley, Richard Suchenski, and several filmmakers (like Jean-Claude Rousseau and Jem Cohen). Excised are contributions by William Johnson (on Affaires publique), Babette Mangolte, Richard Roud, and Michael Dempsey. The completist in me would not want to see anything left out from the original, but I understand that the demands of revised editions often call for such cuts in the interest of accommodating the newer inclusions, which may be deemed to address similar topics more cogently. Or, to take a line from Notes on the Cinematograph: “Unbalance so as to re-balance.”

Many of the essays are standard classics, like those by Amédée Ayfre, Raymond Durgnat, or André Bazin. (Bazin, when describing the tone of Les dames du Bois de Boulogne at one point says, “The sound of a windshield-wiper against a page of Diderot is all it took to turn it into Racinian dialogue.” The merely aspirant film critic will weep before such rich, probing diction.) Michael Haneke's essay is spurred by autobiography, and though he's ocasionally critical of Bresson (the “model” concept has not “always worked well”), he cuts to a simple truth about a complex filmmaker: the “almost physical aversion [on Bresson's part] to any type of lie, especially to any form of aesthetic pretence.”

The chapters are organized, for the most part, without date of publication or introductory note. While the back lists citations of prior publication (where applicable), it would be nice to see some of this material included in the space of the chapter itself. This is especially so because while Robert Bresson makes an excellent companion to a person's retrospective engagement with the master's oeuvre, in practice the book will probably much more often serve as a compendium of pieces to be extracted and read individually.

For similar reasons, and inasmuch as the book might in fact serve as a magisterial starting point for the consideration of Bresson in English, it's regrettable to find no index. What if the reader wants to see which pieces discussed a single film, a particular actor, or even to trace out the legacy of an earlier Bresson critic on later ones' own work? (Examining the Table of Contents alone will only get one so far.) That being said, in fairness, Quandt's introduction boasts great topical clarity. Its subsections carve out some clear vectors into and out of the work of Bresson, imparting a sense of the sheer richness of this filmmaker without suggesting that one could exhaust the work.