[Many thanks to Gabe Klinger for passing along this open letter which we hope will be disseminated far and wide. Gabe's interview with Rafi Pitts will be appearing in English in the January issue of De Filmkrant; La lectora provisoria has a Spanish translation. Follow news updates on the sentencing of Jafar Panahi and Mohammad Rasoulof right here.] 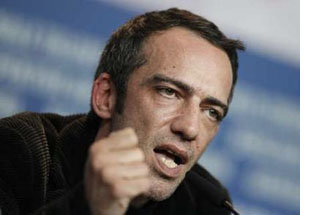 In Solidarity with Jafar Panahi and Mohammad Rasoulof, we suggest to all filmmakers and members of the film industry, regardless of your country or borders, religion or politics, to support our fellow filmmakers by not working for two hours between 15:00-17:00 (local time in Tehran) on the 11th of February 2011, the date of the 32nd anniversary of the Iranian Revolution.

In 1979 there was a Revolution. In fact, the commemoration, the 32nd year of our Iranian Revolution, is on the 11th of February 2011. The reason you need to be reminded of this is because I feel that you have forgotten the reasons why this all happened. Maybe I'm wrong, maybe you need to explain yourself. Maybe you have your own definition of our Revolution. In which case I feel you should respond to the question: Why do you think we had a Revolution in 1979?

A very close friend, Jafar Panahi, one of our most important filmmakers, for whom I have great respect as a person, and admiration as a filmmaker, is being imprisoned by your government, by your law. He is sentenced to six years for wanting to make a film. A film he hasn't even made. Six years in prison on an idea for a film. On top of it all, as though that wasn't enough, he is sentenced to twenty years of not being allowed to make another film and twenty years of not being able to leave his homeland.

Another important young director, Mohammad Rasoulof, is being convicted with the same sentence. His crime: working with Jafar.

They are both punished for caring about their fellow man. Punished for wanting to understand the events of June 2009. Punished for caring about the lives that were lost in the conflict due to the elections. Although, need you be reminded, all candidates had been given permission to present themselves by the regime. The choices were very clear and indeed legal. Jafar Panahi and Mohammad Rasoulof made their decision alongside the majority of our film industry. It became the Green Movement. The right was given to us.

° Do you think there is anything wrong in wanting to understand why people died in our last elections?
° Do you really believe that our country is unaware of the violence the election results caused?
° Is it a crime for Panahi to want to make another film?
° Is it a crime for Rasoulof to question reality?
° Is it because filmmakers want to hold up a mirror on what has happened to society?
° Are you afraid of a point of view that might contradict yours? In which case, please answer the question: Why did we have a Revolution?