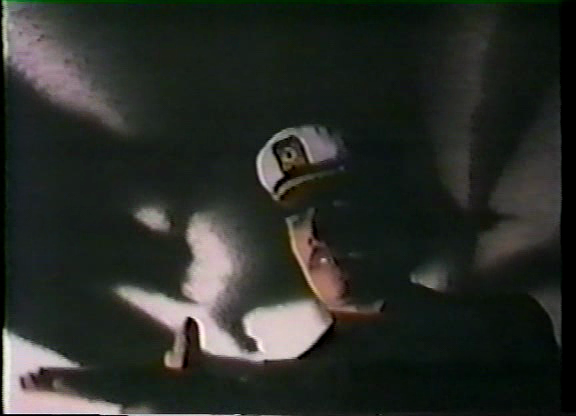 Notebook is unfurling a series of tributes to Raúl Ruiz entitled Blind Man's Bluff: along with some previously published articles, here in English for the first time, the bulk a compilation of new, shorter pieces from a few generous critics and Ruizians on favorite moments from a vast, subterranean filmography.﻿  For more from Raúl Ruiz: Blind Man's Bluff﻿ see the Table of Contents. 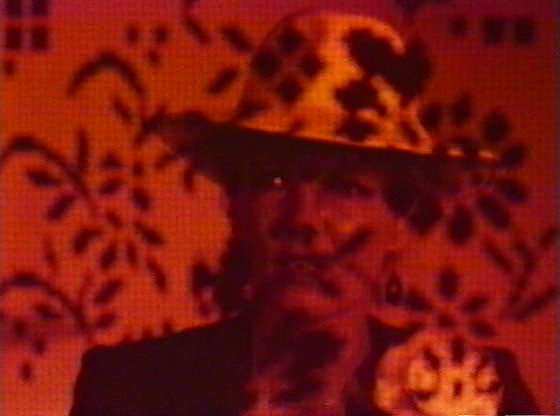 Given his immense success with the impossible Proust, Ruiz may have proven the ideal director for Nabokov, especially his hilarious Pnin. Ruiz and Nabokov were well matched with their shared themes of memory and exile, rapture and obsession; their fondness for elaborate word/image play; their grave facetiousness. Imagine what Ruiz might have done with that vertiginous “segue” at the start of Chapter Four of Pnin in which Victor’s nocturnal fantasy imagines his father as a king “sitting at a spacious desk whose highly polished surface twinned his upper half in reverse, making of him a kind of court card.” (With his ability to “see the colors of shadows” at age six, Victor would join the gallery of Ruiz’s preternatural children.)

As Nabokov’s work is sometimes treated as a collection of effects (synesthesia) and  fixations (lepidoptery, chess, his lost Russia), critics frequently characterize Ruiz’s style as a catalogue of anti-illusionistic devices, the artisan’s arsenal of exaggerated Wellesian deep focus, garish color filters, impossible POVs, baroquely canted angles, anamorphic distortions, and the baffling “glide shots” of his late films, all serving to unmoor meaning, destabilize space, and incite a state of flabbergasted disbelief. (The perpetual forestalling of Jorge Arriagada’s portentous music scores amplifies the impression.) But two of the most memorable moments in Ruiz’s cinema extend from his idiosyncratic use of rack focus, a “primitive” form of which he jokily demonstrates in Mysteries of Lisbon, theatrical lighting alternating between Joao in the foreground and a distant conversation behind him. At precisely the three-hour mark of Lisbon, in a reversion to the pictorial ruses of Top of the Whale and City of Pirates, a cup and saucer mysteriously materialize in the midst of the frame, and appear to hover in space like some porcelain UFO, its roundness rhymed with a tondo frieze on the ceiling of Madame Cliton’s quarters as the low-slung angle forces us to stare giddily upwards. Three decades previous, in Top of the Whale, Ruiz and Henri Alekan, the legendary cinematographer he brought out of retirement, devised one of the most boggling compositions in the director’s entire cinema by rack shooting a monologue delivered by the anthropologist’s wife, played by Willeke van Ammelrooy, through a lace curtain: a shifting interplay of scrim and speaker, flesh and texture, strange aural cadence and odd visual oscillation. — James Quandt

Pretty much every image, effect or edit in City of Pirates is a worthy contender for the title of “definitive Raul Ruiz moment” (that might just be why City of Pirates is, well, the definitive Raul Ruiz movie). Take, for example, the infamous head in the suitcase: the stuff of nightmares, presented in the most mundane way possible, with a lilting, muzakish cha cha by Jorge Arriagada (cinema’s most subversive composer) taking the scene somewhere beyond mere non-sequitur. Or the double exposure at the end or the magical ring or the various switches to color-tinting and black-and-white. Again: pretty much every image.

My personal favorite comes from the scene on the terrace early in the movie. Mind you, the entire scene is presented as a series of trick shots: split diopters, forced perspectives, odd juxtapositions of foreground and background (a man’s head framed against a plate of head-shaped berries is one of two visual references in the film—the head in the suitcase being the other—to Surrealist favorite Giuseppe Arcimboldo).

But one trick shot stands out from the rest: a sort of POV shot from inside a man’s open mouth, with a woman looking in. This unnerving, imaginative, completely crazy image is followed by a shot of the woman’s sunglasses reflecting the face of the open-mouthed man.

Why these two shots? Ruiz created an inclusive cinema where pretty much anything could happen; the mouth POV shot is more or less incontrovertible proof of that. He was also very fond of creating the illusion that his films were games, puzzles, or patterns that were governed by rules that could be intuited. The two shots in question are deliberately mistmatched, yet—like much of Ruiz’s work—they seem to follow some sort of mysterious logic. You assume (especially if you’re new to Ruiz, as I was when I first saw City of Pirates) that they constitute some kind of series; is a shot up the woman’s nostril next?

But what follows instead is a very slow dissolve that superimposes the woman’s face over a beach at sunset. This is almost a microcosm of Ruiz’s work. In just two shots, an apparent pattern is created only to be deliberately, nonchalantly broken. And what appeared at first to be a clever series of images turns into something else: an enigma. — Ignatiy Vishnavetsky 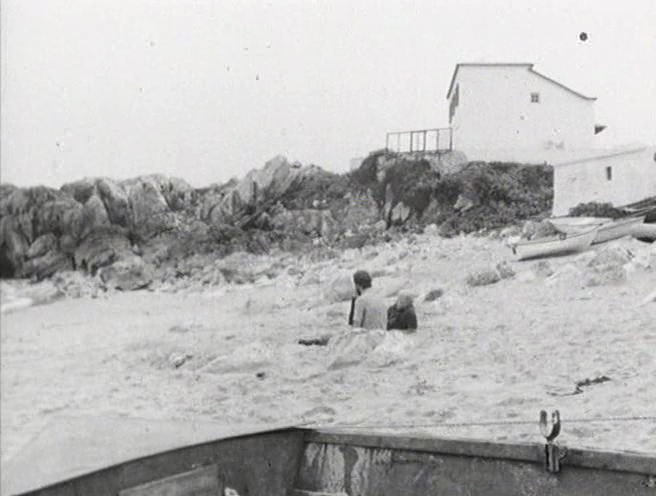 Two men sit on a beach, looking out at the sea. They speak monotonal English and discuss their relatives, their languages, dreams (“But it’s a dream!”/ “But it’s still not true.”), and a strange man who puts dirty love letters in empty beer bottles before tossing them into the sea. It’s a simple, straightforward sequence—two establishing shots of our conversationalists, a cutaway to the strange letter-writing man, and finally a series of shot/reverse shots as they discuss the love letters. At the end of it all, neither man gets why anyone would want to put love letters in empty beer bottles (“what is the idea?”/ “﻿it’s a perversion”). The scene is indicative of all that come before and after it, with characters sitting and talking while drinking beers, smoking cigarettes and, often, playing cards. Each moment a new love letter unearthed from another bottle that has washed up on shore, the totality of which may (like the man on the beach thinks) appear perverse, but also stands as a fascinating testament to a filmmaker’s process.

Between the lavish and bright Three Crowns of a Sailor, City of Pirates, and Manoel, it’s curious (but not surprising) that Ruiz would make such a tiny picture, shot on grubby black and white. But with Point de fuite, he had two goals in mind: to simplify content and mode of creation and also, apparently, to find out if he could break Rainer Werner Fassbinder’s record of the most  (70 or so) independent camera set-ups done continuously without retakes. There’s a hint of a suspense brought on by the slight connective thread of the card playing, the jazz-infused score, and the isolated space, but this isn’t a movie of forward progression; it’s a movie of individual moments, of wanderers rather than searchers, and of two men on a beach discussing love letters in beer bottles. The result, a successful one, is less of a narrative and more of a guided tour through Ruiz’s head. A chance to watch him free-associate—the focus on technical apparatus allowing for an almost hidden camera opportunity to observe a filmmaker’s obsessions free of the packaging of editing. — Gina Telaroli 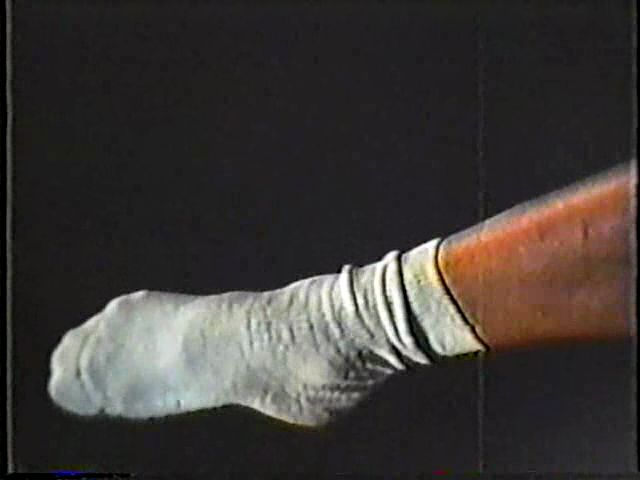 As a male dancer lies on the floor, whispering to himself, a female dancer next to him raises and lowers her left leg, then her right. She then makes a half-circle around him with her left foot, then her right, before lifting that right leg up to her back and then repeating the half-circular movement around his body. Ruiz shoots most of what I have described in mobile close-up, emphasizing the movement of the dancer’s pointed feet, which are covered in white socks. It is not the entire body in motion that interests Ruiz at this moment; he wants instead to underline the importance of this foot as it moves. (There is no music here.)

Ruiz’s cinema is filled with images and verbal utterances that offer themselves up to us as emblematic, but this moment from Mammame is one of the most beautiful and evocative. People dance quite often in Ruiz. But it is difficult to think of a major filmmaker for whom the movement of the human figure is slower, more difficult (Mammame is both an exception and an example). The cinematic image for Ruiz is typically a question of tying that image to the world of painting, to the tableau vivant, the photograph, or the comic strip panel, as his human subjects, struggling within these shots, are poised between life and death, sleep and wakefulness, when they are not ghosts, mannequins, statues, dolls. In this cinema of agonized transformations and endless exile, movement is always necessary, even compulsive at times. And yet this movement is never quite complete, even while it never quite gives itself over to clichés of vicious circles or dead ends. “But any movement affected by a human being,” we are told in The Hypothesis of the Stolen Painting (1978), “leaves an imaginary trace comparable to a curve.”What is this dancer in Mammame doing but creating not a circle around the man with her foot but simply her own choreographed version of this curve, this trace or inscription that haunts so much of Ruiz? — Joe McElhaney