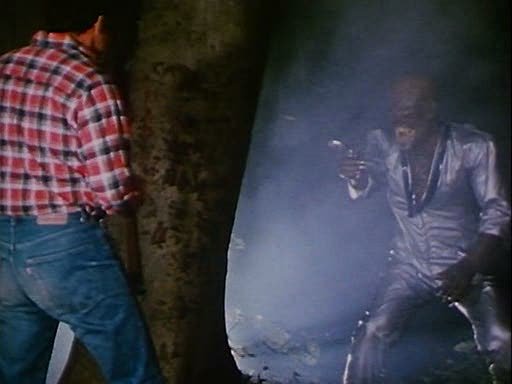 At ten o’clock on the evening of Saturday 26 July, as the lights dimmed inside a 159-seat auditorium inside Wrocław’s nine-screen Kino Nowe Horyzonty, the resounding ambience consisted of chatter, cheers, the clatter of glass bottles and that inimitable sea of punchy hisses as the capacity audience cracked open one beer can after another.

They’d come for a triple bill: Amir Shervan’s Samurai Cop (1989), Don Dohler’s Nightbeast (1982) and Arizal’s American Hunter (1990). Numbers had depleted and decibels had doubled by the time the lights came back on at around quarter-to-three the next morning. The marathon formed part of ‘Midnight Madness: VHS’, the late-night retrospective at New Horizons, western Poland’s excellent film festival, whose annual program also boasts some of the most dependable arthouse titles from the previous twelve months.

Had anybody been observing the scene of ordered anarchy that night, they may have noticed a puzzled Englishman sitting one row from the back, pen and pad in hand and not quite able to join in with the hearty laughter around him because he was only just realizing, with some embarrassment, that the evening’s program was showing from old videocassettes put out by Video Rondo, the Gdynia-based home entertainment label that dubs everything into Polish. Noticing that the Englishman was visibly unmoved by the opening succession of dreadful one-liners, one local girl asked him if he understood anything. Keen to save face, he responded, “I only came for the directing.” 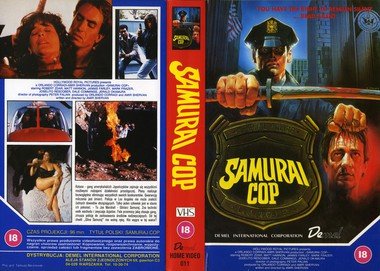 It’s funny how quickly one adjusts to such scenarios. Less than ten minutes into Samurai Cop I knew its plot didn’t matter and that much of its humor was to be found in the deliberately choppy editing, incongruous cutaways, daft fights, hilarious hairdos and its confused racial and gender politics. Not that anyone seemed to mind the latter: the lower the taste the more they clapped, and the later it got the more vociferous they were. This is all well and good but for the fact that this was the semi-competitive social space of a cinema, whose sheltering cloak of darkness encourages each laugh to be louder than the last. What could go wrong? Very little, so long as nothing serious happened onscreen—something serious like racism or sexism, for instance.

“Which one is he?” says bland heartthrob Joe when told by a lowly enemy that chief villain Okamura is the man he’s after. Which one indeed: characters are so anonymous and expendable here they may as well be played by a bunch of samurai-trained clones. But the racism goes both ways: later, when Frank is captured by the baddies, he’s threatened with dismemberment, his captor referring to the would-be separated organ as “this black gift.” It’s not the first joke in the film about a black man’s penis—but the other got bigger laughs.

Women get the brunt of it too. Samurai Cop was made the same year as the first episode of Baywatch, and shares with that show an emphasis on beach-tailored physiques: Hannon—who was presumed dead by fans of the film until he resurfaced in a recent YouTube video a few months ago—is cut like an action figure, and his romantic conquests are all bleach-blonde stunners who swing their manes back while riding our long-haired protagonist with passionless, bare-breasted hilarity. Wolf-whistles abound.

Call me old-fashioned, though, but when cheers and applause blurt out from the dark in response to a woman’s nudity as she lies in tears on-screen following a sexual assault—as they did during one scene in Nightbeast—I have trouble getting swept along. Then again, this critic doesn’t believe in the notion of guilty pleasures (you either like something or you don’t, without apologies), and this was meant to be a night of them. 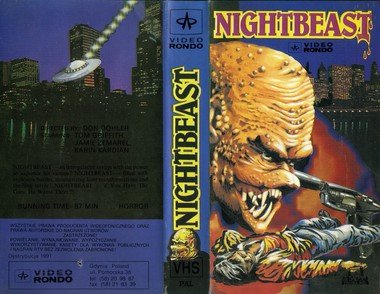 In fairness, most of the program unfolded harmlessly enough. More offensive films have certainly been made than the three screened here, and the shared irony and elective silliness that pervaded the auditorium were seemingly rooted in the simple joy of watching crap. But is joy ever a simple matter? Probably. In the meantime, something resembling karmic realignment came at around quarter-to-one in the morning, when the character responsible for Nightbeast’s earlier sexual assault was finally shot dead, prompting a feeble counter-clap from a small pocket of presumably disgruntled humans near the back. Small mercies!

In defense of Nightbeast—whose most major drawback is its charming flabbiness—screenings such as this one, billed as they are, have less to do with the films than the audience itself. For my money, you could curate Baltimore-born Don Dohler’s science fiction horror with an unironic emphasis on its lo-fi strengths—among whose technical credits we find title sequence effects by Ernest Farino (subsequently credited on The Terminator, The Abyss and Terminator 2), creature design by John Dods (Ghostbusters II, Alien Resurrection and The X-Files) and musical score by a then-teenaged J.J. Abrams.

In Nightbeast’s action-packed opening sequence, a UFO lands in Perry Hall—a sleepy suburban area in Baltimore County—and the creature aboard it runs amok with a ray gun in the surrounding woods, vaporizing four men and—just when you think they’re going to be the film’s protagonists—two children. The morning after the carnage, the town comes to its senses and, led by Sheriff Jack Cinder (Tom Griffith), rallies together to stop the beast—which looks a bit how Star Wars’ Admiral Akbar might after a night of watching fuzzy, drink-accompanied, cinema-projected video.

One merit is the film’s casual melodrama and smalltown intrigue, which are incorporated seamlessly and plausibly between the bursts of gory horror. Another strength is the unfussy tenderness given by an out-of-the-blue love scene between Griffith and Eleanor Herman, neither of whom is typically camera-friendly in terms of age or appearance and yet make the scene all the humbler for it. Indeed, working with the same cast (in the same roles) as his debut feature The Alien Factor (1976) was, for Dohler, a matter of budget. Precluding a star draw, it also meant that no character was above the film; anybody may be killed off at any moment. 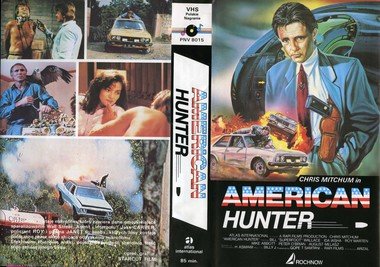 That’s not a luxury afforded to American Hunter, though, which must brave the burdens of an undeniably committed but casually terrible leading performance from Robert Mitchum’s second son Chris, whose flighty martial arts scenes almost compensate for his unconvincingly soft demeanor. Beginning mid-scene, the film barely gives viewers a moment to grasp its premise (some mumbo-jumbo about a microfilm and another economic crash on Wall Street) before rattling onward through a dizzying succession of well-choreographed fight sequences.

Most hilarious is that it’s never quite clear what Mitchum’s character actually does: is he a bounty hunter, a vigilante or just a martial arts enthusiast who likes to make trouble? At any rate, there’s a long line of foes for Mitchum to thwart. Chief among these is Bill Wallace, with whom he has a climactic showdown aboard a train—surely the best fight sequence of its kind and setting since Connery and Shaw’s in From Russia with Love (1963).

In 1980, Bill ‘Superfoot’ Wallace had retired as an undefeated middleweight full-contact karate champion following 23 consecutive wins in seven years. His snarling, take-no-prisoners performance is a top-to-bottom masterclass in reliably cartoonish menace. Clobbered with a cheap shot while holding someone at gunpoint, Wallace throws his weapon down with relish (“I’m not even gonna use this”) and proceeds to give the other fella three lightning-fast hook-kicks to the head and some ferocious knees to the sternum. Such venom transcends subtitles and dubbing: as late as half-two in the morning, Wallace’s sneer brought some of the most rapturous applause of the night—not to mention the least problematic.