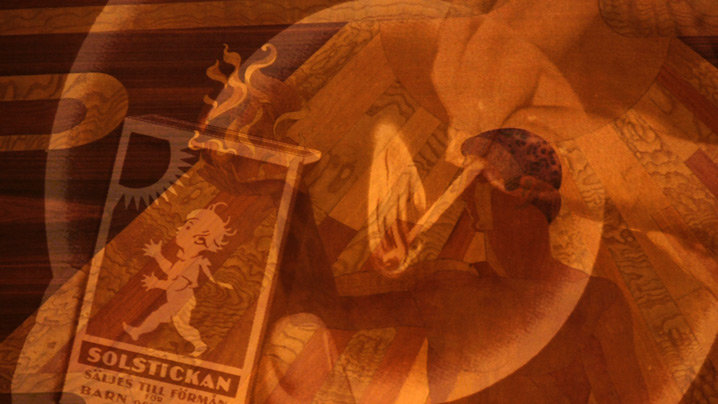 This is the second of two reports on the 56th Robert Flaherty Seminar.

Fifty-five years after Frances Flaherty held the inaugural iteration of the Robert Flaherty Seminar on her farm in Vermont, the annual gathering of filmmakers, critics, scholars, and programmers sustains its reputation for intense programming schedules and volatile debate. With an itinerary as relentless as it is rewarding—six-plus hours of screenings per day, and several discussions each lasting an hour or more—the Flaherty's seminarians have a famous tendency to get contentious, especially around the midway mark when the over-saturation of images, lack of sleep, and low ebb of caffeine combine to set everyone on edge. And in spite of Frances's frequently invoked dictum of "non-preconception," tensions inevitably mount among participants in the throes of a program of films that remain unannounced until the projector starts rolling.

Midweek into the 56th Flaherty Seminar, the dam finally broke with the screening of Zhao Dayong's Street Life, a portrait of homeless, displaced, and often disturbed people sustaining themselves by collecting bottles and cans in Shanghai's commercial and tourist center. Documenting the fractured friendships and petty squabbles amongst the bottle collectors in often maddening detail, Zhao's film culminates in a lengthy and deeply disturbing spectacle of one of the subjects ecstatically, acrobatically losing his mind in a massive public space, a giant screen almost mockingly projecting a martial arts cartoon in the background.

With this prolonged and distressing sequence falling in the middle of the week’s program, Zhao's film seemed particularly well poised to incite the frustration of the attendees—a full ten minutes locked in the throes of this unnerving scene is enough to both impress upon one the helplessness of the spectator in the face of shocking images of life on the margins and raise questions about the ambivalent ethical responsibilities of documentary film practice. (One commenter went so far as to suggest that Zhao should have called the Shanghai equivalent of 9-1-1, perhaps forgetting the film's many mentions of the authority's prior brutal treatment of disorderly street people.) But in response to those who found his programming choices provocative, 2010 Flaherty programmer Dennis Lim later remarked that these works were not intended to be "miserablist or sensationalist but confrontational in the most decent, human sense of the word." Few could deny that many of these works forced a confrontation with otherwise invisible ways of life—especially in the rural and industrial economies of Latin America and Asia. And notwithstanding the Flaherty's cosseting green setting of the Colgate University campus, Lim's chosen theme of "WORK" was not to be taken lightly: this week was about the work of filmmakers and spectators, too.

Above: Gibbs Chapman's Push Button: A History of Idleness and Ignorance.

This is not to say that the week was without its rewards of wit and levity. The flustered drama of Monday's Street Life discussion was immediately followed by a very welcome surprise in Push Button: A History of Idleness and Ignorance, by the Flaherty's own projectionist, Gibbs Chapman. (Another of the idiosyncrasies of the Flaherty's preconception-less programming is that it allows its curators the freedom to insert films on the fly, and Chapman's film was just such a late-breaking entry.) Playfully drawing on interviews and found footage, the 16mm Push Button is a droll diatribe against the lethargy induced by advertising and consumer capitalism. Chapman's techno-materialist indictment of Western ignorance about the inner workings of things, playing alongside Alex Rivera's dystopic DIY techno-thriller Sleep Dealer, offered a fresh perspective to a program that had hitherto concentrated largely on the underrepresented labor of developing nations. Here, the emphasis shifted slightly to the ways in which this labor is exploited for the benefit of the overrepresented First World, a subject that could hardly be more timely—or closer to home. 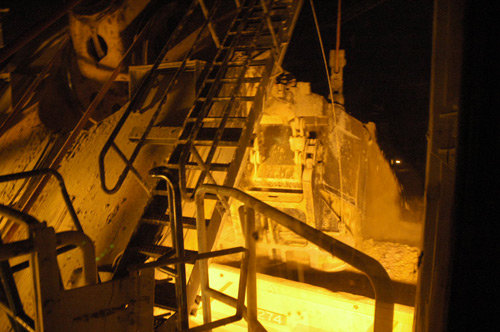 Similarly holding the mirror up to the thoughtless, exploitative practices of wealthier nations, Benj Gerdes and Jennifer Hayashida's 2009 video essay Strike Anywhere offered insight into the rise of capitalism through the story of Swedish matchstick-magnate Ivar Kreuger, whose manipulation of markets throughout the world led to his control of monopolies in upwards of 34 countries. Densely packed with images of factory workflow, charts and data, expert interviews and personal testimony, which is further and more evocatively refracted in their 16mm loop Populus Tremuli, Gerdes and Hayashida's work of "artistic research" found an interesting contrast alongside Lucy Raven's China Town. A "photo animation" comprising more than 7,000 digital photographs, Raven's video was assembled to suggest the flow of copper from a mine in Nevada to a copper wire manufacturer in China, and like Strike Anywhere it traces the historical and geographical flow of material and capital, albeit with a sense of discontinuity—of stop-motion—built into its very structure. 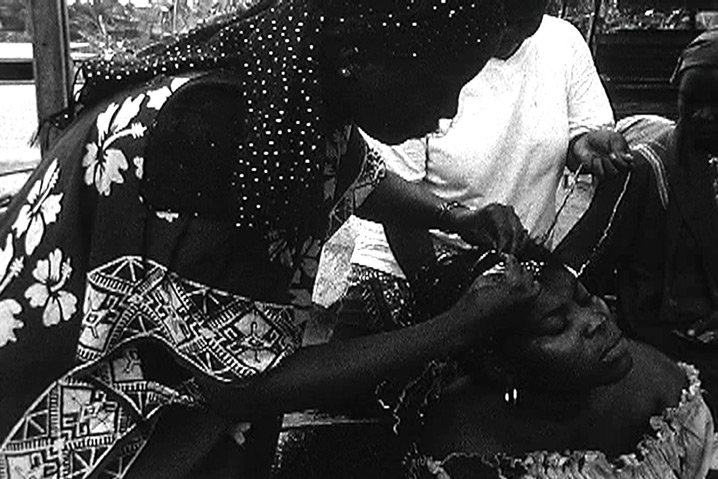 The flow and process of labor across national boundaries takes on very different inflections in the films of Naomi Uman and the videos of Akosua Adoma Owusu, especially as each filmmaker is engaged in her own form of transnational work. Uman's recent films evoke her life in Ukraine, where she has lived for the last several years, and mirror her study of Ukrainian language and fascination for local artisanal practices. Brimming with sensory riches, Kalendar follows the months and the seasons in exquisite, yet approachable snapshots. In this cycle of works, which Uman has collectively titled "The Ukrainian Time Machine," the images form simple, but precise miniatures of a rural life that's fading, much like what she terms the "moribund format" of 16mm filmmaking. Owusu, on the other hand, works in video, but like Uman she finds continuities between her medium and local crafts and culture. Me Broni Ba (or My White Baby) comprises images of Kumasi hair salons where women use white baby dolls to practice hair-braiding, forming a rhythmic, stop-start montage that partly analogizes their work to Owusu's own artful interweaving. 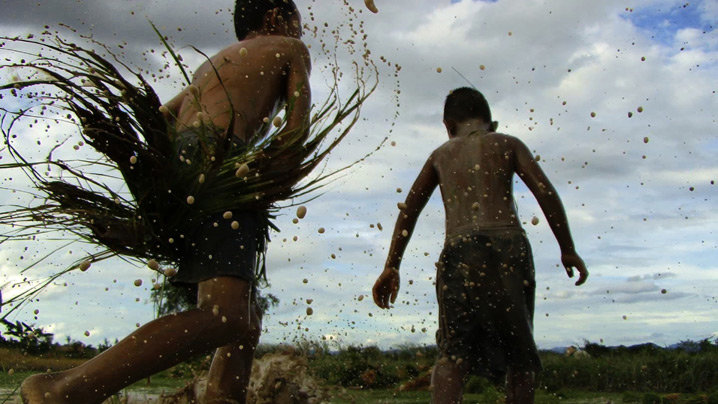 But the most striking form of hybridizing at this Flaherty, at least formally, was that of documentary and fiction: routinely the selections flouted the conventions of reportage in favor of reinvention. Michael Glawogger's Workingman's Death (2005) is as much head film as a documentary, globetrotting between exotic marvels of labor and endurance, from sulfur gatherers in Indonesia talking about Bon Jovi to Pakistani laborers ripping apart massive, rusty cargo ships with blowtorches and bare hands. (These latter workers are also featured in the coda of Peter Hutton's similarly jaw-dropping At Sea [2004-7].) At the other end of the sensory spectrum is Uruphong Raksasad's remarkable Agrarian Utopia (2009), whose shimmering, hard-edged, DV landscapes of rural Thailand form the backdrop to a naturalistically restaged narrative of two struggling families farming a rice paddy with pre-industrial methods.

While each of these films in its own way bends the spectator's understanding of reality and fiction, Pedro González-Rubio's second film, Alamár (2009), simply elides the question. A tender, unabashedly naïve portrait of a five year-old boy's summer with his semi-estranged father in the coral atoll of Banco Chinchorro, on the Yucatán Peninsula, González-Rubio's film uses non-professional actors as versions of themselves in semi-staged situations: fishing for barracuda along the reef, nonchalantly feeding a crocodile, and delicately winning the confidence and friendship of an egret. Lucid, sensual, and immensely touching, it’s the tonal opposite to González-Rubio's dark, nasty first film, Toro Negro (2005), which screened earlier in the week. (Alamár is currently playing at New York's Film Forum.) 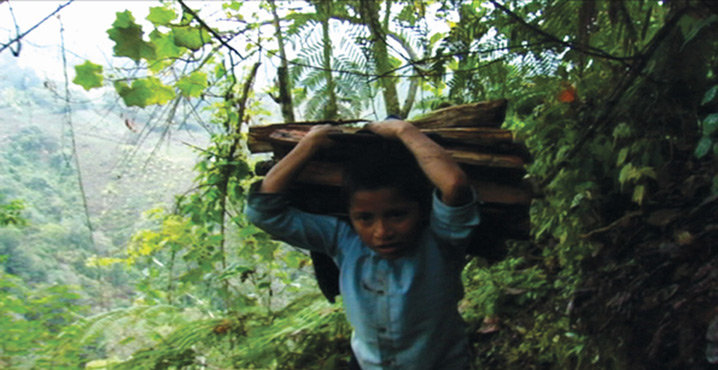 Alamár's boyish view of the world established a new theme in the latter part of the week's programming: the lives and roles of children in the often mercilessly grown-up pursuit of labor as a means of survival. Eugenio Polgovsky's Los herederos (2008), which follows the lives of child laborers in rural Mexico, neatly crystallizes this theme through the filmmaker's particular combination of lengthy scenes of ethnographic observation with sudden bursts of editorialization through montage. In one sequence, a boy works intensely and at length at carving a piece of wood with a knife, and Polgovsky, shooting in closeup, steadily mounts the dreadful anticipation for the moment when he will cut himself. (When he does, he bleeds a bit, and asks his younger brother to fetch him some Scotch tape to dress the wound.) Throughout Los herederos, children are the inheritors of their parents' poverty as well as their ways of life: they assist them in the very adult labor of harvesting crops on a vast, industrial farm, or apprentice in the tasks of weaving or herding closer to home. But Polgovsky is careful to mix these otherwise grim and serenely enraging portrayals with some of the blithe playfulness of the children themselves, their nighttime raindance providing both an exhilarating coda to the film and the faintest glimmer of hope for a desperate situation. 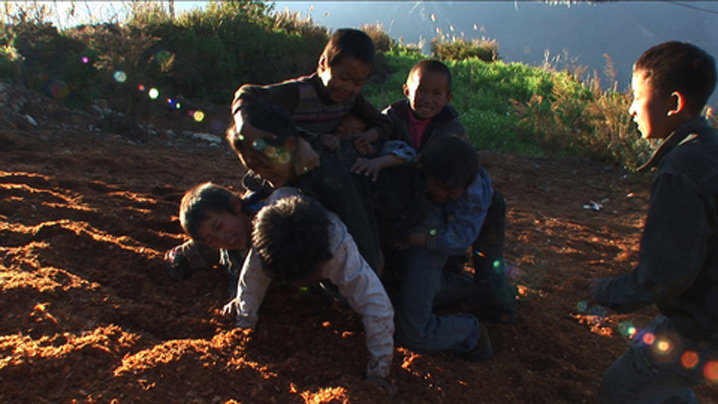 Zhao Dayong, who returned towards the end of the program with his majestic, similarly unflinching Ghost Town (2009), also finds a striking metaphor for humanity in the resilience of children in the face of rural poverty. His film, which had it's U.S. premiere at the New York Film Festival last fall, follows several stories of lost souls in a remote mountain village in southwest China, but it coalesces in its final chapter, which follows an abandoned 12-year-old boy and his scrappy existence—wreaking havoc with his buddies amongst burned-out buildings, subsisting on small birds which he traps with glue and roasts over a meager flame. As with the more divisive Street Life, Zhao's tack here, as he later explained, was "to make [himself] one of the people in the film," rather than to merely document them, to immerse himself and the spectator in a place that most people have simply given up. "Can you see us?" one passer-by asks at the start of the film, and throughout the film, his camera not only observers but becomes a part of the village's life from the start, wrestling in the dirt with the village kids and helping to "drive away the ghosts" in a fiery exorcism.

Zhao's extensive embedding of his audience in this ghost town, where the needs left by the lack of paid work are filled with the simple labor of survival, again echoed the intentions of the program's curator: to be "confrontational in the most decent, human sense of the word," to engage the spectator with images that others have quite literally fled from. At their best, the films in this Flaherty sought not only to lend insight into the social and political realities of work or its absence, but also to make these realities personal, articulating the ways in which work divides and regroups people, quite often against their will. Time and again, the accomplished and often challenging work of these filmmakers demonstrates the endurance of these individuals, rather than simply their desperation, and grappling with these ideas and practices of representation is the Flaherty's own collective labor—and indeed part of the fun of it.