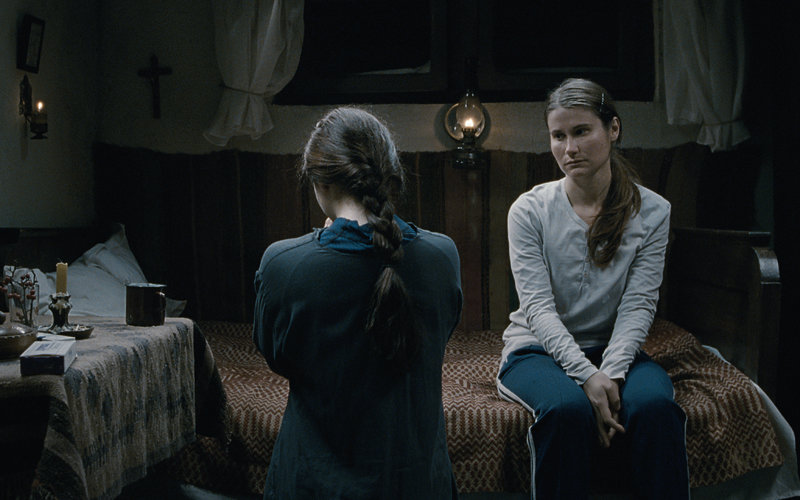 A subset of Romanian cinema remains deeply informed by Nicolae Ceaușescu's tenure as General Secretary of the nation's Communist Party, a 24-year reign that ended with his execution in 1989. The title of Corneliu Porumboiu's 12:08 East of Bucharest refers to the exact moment at which the dictator attempted to flee the eponymous city, Radu Gabrea’s docudrama Three Days Till Christmas reenacts his last days alive, and Cătălin Mitulescu's The Way I Spent the End of the World tells of two siblings whose respective plans involve escaping the country and assassinating Ceaușescu. The most explicit example is Andrei Ujica's The Autobiography of Nicolae Ceaușescu, a three-hour-long documentary composed entirely of archival footage that gives as clear a sense of the authoritarian ruler's public persona (and, given the many mass demonstrations he's shown attending, how the populace was meant to act in his presence) as any layman such as this writer is likely to come across; the documentary thus makes its way into the mind when viewing a film like Cristian Mungiu's Beyond the Hills. Though it does not actually take place during the Ceaușescu era—which sets it apart from the filmmaker's tale of a student seeking an abortion in 1987, the Palme d'Or-winning 4 Months, 3 Weeks and 2 Days—the patriarchal power dynamic slowly propelling its narrative echoes that of his reign and suggests that neither Mungiu nor those who inhabit his fictional world(s) have fully forgotten. Here Mungiu turns his focus to a wayward orphan named Alina following her best friend (and, it's heavily implied, former lover) Voichita to a rural monastery led by an enigmatic priest whom Voichita troublingly refers to as “Papa.” The timeline has moved to the present day, but in few other regards do things feel different: our protagonist is still largely hapless and at the mercy of others who rarely have her best interests in mind.

Beyond the Hills is gorgeously austere and often exhilarating in its its slow-burning atmosphere of dread and sorrow. It also features a repetitive middle section that that lays it on a little thick—Alina falls ill, Voichita becomes distant, Alina convulses, Voichita and the nuns tie her up. Mungiu uses their largely unspoken lover's quarrel as the starting point for an indictment of institutional callousness as critical of the medical and law-enforcement fields as it is of the not-officially-sanctioned monastery's almost comically unhelpful nuns and the exploitative priest who ignores Alina when possible and leads the charge against her when it isn't. Other than the deeply troubled Alina, who most needs an emotional outlet of any kind, everybody else in the film has someone or something on which to place his or her burdens: Voichita puts her trust in the other sisters and Papa; they place theirs in God; the police officers, doctors, and nurses whose help Alina needs either pass her off to their superiors or ignore her completely. Beyond the Hills is, among other things, a portrait of an uncaring pecking order seen through the eyes of this particular society's lowest-ranking member, a lovesick and mentally unstable young woman whose former inamorata has left her for the Lord. It takes Mungiu all of a minute of screen-time to subtly establish Alina and Voichita's dynamic when, upon seeing one another for the first time after a long absence, Alina is brought to tears of joy and her recently-converted friend tells her to stop because “people can see us.” It's all downhill from there.

Upon first viewing the film in a festival setting, it was Mungiu's blend of melodramatic outbursts and holy environs that most stood out. Seeing it a second time brings into relief the writer-director's focus on a borderline Kafkaesque bureaucracy. The officers Voichita goes to for help obtaining a work visa carry on side conversations and barely notice her presence in their station. The doctor assigned to Alina after her first breakdown needles her with increasingly personal questions and tells her to “be patient” because “we'll untie you later;” as much as Cristi Piui's The Death of Mr. Lazarescu, the film is a chilling reminder that America does not hold a monopoly on broken healthcare systems. Not that the medical and religious are wholly separate here: the last thing Alina's doctor says to the nun taking her home after her hospital stay is to have the wayward girl read the scriptures because “it'll help.” It doesn't. For Alina, the good book serves mostly to represent her separation from the person in whom she's put what hope she has left. (It's little coincidence that several of her hysterical outbursts take place while Voichita and the other nuns are either praying or in the middle of one daily ritual or another—Alina wants to disrupt them in any way possible.)

Mungiu's treatment of the monastery itself is, in effect, as a physical manifestation of the invisible machinations guiding almost every action in 4 Months, 3 Weeks and 2 Days. Everything from Alina's clothing to her attitude to the fact that she isn't exactly a believer immediately puts her at odds with everyone else at the monastery—Papa most of all, whom she suspects of a lecherous relationship with Voichita from the outset—and their relationship with her quickly deteriorates from uneasy tolerance to attempted dismissal to outright hostility. Alina is seen as more of an inconvenience than someone worth helping, and thus a disruption to their carefully maintained status quo. The convent's austere rooms would be stifling, even claustrophobic, on their own; Oleg Mutu's long-take camerawork underscores the oppressive milieu. There's a sense that nothing about this house of God or the vast landscape surrounding it has changed or will change for a very long time, creating the locked-away atmosphere of a horror movie: for a full 150 minutes, we are as confined as Alina.

An orphan who grew up in foster care and is rejected not only by the church but by her only friend, Alina has been passed from one carer to the next throughout her life and the list of people willing to help her quickly approaches zero. But Mungiu doesn't go so far as to present her as a martyr—more a victim of circumstance and her own inability to fit in anywhere or with anyone. (In this sense, she's as much a stand-in for Romania's brushed-aside citizenry as was Mr. Lazarescu.) Given the similarly male-dominated milieus of both Beyond the Hills and 4 Months, the fact that Mungiu's latest is once again seen through the eyes of two female friends immediately keys us into his humanist approach by showing he remains focused on the plight of his country's downtrodden; that our heroine is left entirely to her own devices this time around makes Beyond the Hills even more tragic.﻿﻿