From the spectral underground comes a real work of cinephilia, and by that I mean something that is neither fetishization of a film object nor an exploitation of the same for other means. Rather, Mary Helena Clark's 16mm Orpheus (Outtakes), which I had the pleasure of seeing at TIFF's Wavelengths program last September and revisiting again in Rotterdam, finds on the cutting room floor the facts, dreams, and possibilities of cinema history and future. Cinephilia as lucid consciousness of what lies beneath, behind, and beyond films.

After plunging into a Lynchian circular void, fragments of Cocteau's Orpheus are revealed—a ladder forcefully spun sideways repeatedly—followed by extracts of the film's subtitles with the image blacked out. Subtitles about reading, light and darkness, movement up and down. From cross-wise images to textural descents. Next in this celluloid path are eyes opening in the dark of a matted frame, like Musidora behind a mask in Les vampires—though here played by Clark herself—while the soundtrack filling the blinking darkness is from the 50s TV celebrity quiz show What's My Line, whose blandly informational questions lead inexorability to the answer of Buster Keaton. (Are these his eyes looking back at us with their own questions?) After a rainstorm of scratched frames, the film ends with a chain, like an anchor; though it initially looks like the perforations in film stock, then later a spinning double helix or stairway—but whether let down or drawn up it is impossible to say.

﻿This finale literalizes the surreal passage of Orpheus (Outtakes) through previously unconnected film history, film to TV, images to words to sound to silence and imagelessness, eyes and anonymity and a lost era. In a brief six minutes, Clark opens up cinema and film material itself to oneric permeability, plumbing the art with its own tools and finding, under its surface, evocative subterranean passageways.﻿ 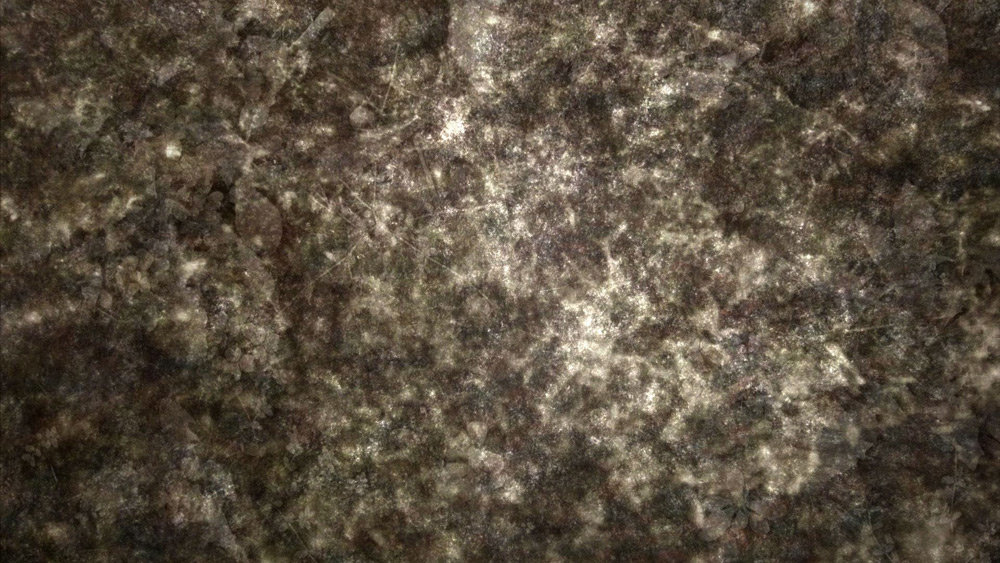 Sent below the surface by Orpheus (Outtakes), I had no firm idea where I was while watching Makino Takashi's 30 minute short video work 2012—or, in fact, what I was watching at all. It throbbed and changed minutely before my eyes, though often, in gestalt, remaining the same: A sea awash of digital flow, layers laid on layers.

Perhaps there was a film or video image at the depth of the screen (indeed, some bare figurative movement throughout suggests some original footage hiding somewhere), but on top of that potential, or hypothetical, core was color banding, video interlacing lines, archipelagos of pixelation, and quietly strobing luminosity. Backed by music by the filmmaker (originating in a live performance played with the video), I recalled the opening to the director's cut of Michael Mann's Miami Vice, that digital underwater footage whose sensation expresses something beyond deep submergence. Here it is akin to plunging into a waterfall with nightvision goggles on, or of recording digitally the online stream of video of a movie that was originally shot on film.

There isn't depth, precisely, to the imagery, but rather a kind of totally flat topography of microscopically thin planes, like watching an alien planet's weather system from above or filling your field of vision with the torrents of rapids. I wonder: is video here intruding on something filmed? At a certain point damaged stock seemed to be laid on top of the digital imagery and the impression is momentarily flipped. With so much video layering, the ability to differentiate between the subject of the “camera” and the recording material—celluloid frames, pixels, what have you—becomes impossible. The depthlessness makes the image texture a brittle carapace hiding who knows what, as all is a slurry of birthed and thwarted micro-geometries of pixels and pixelation.

This constant movement is sometimes linear like a stream or snowfall, unfurling scroll-like across the screen; sometimes the motion is into the depthless screen, like space travel in the cinema or a submarine's phantom viewpoint. Most often it is pure circulation, full of pulsating tremors, roiling, boiling bubbles. On the soundtrack along with the music are some distant field recordings, children playing, crowds applauding. I wonder where these people are, what that shrouded figural movement is cloaked somewhere in there, where those trees—I swear they are real, recorded trees and not a digital trick of the eye—come from and where they've gone. Above all, I want to know what this sea is in which I briefly swam.﻿﻿ 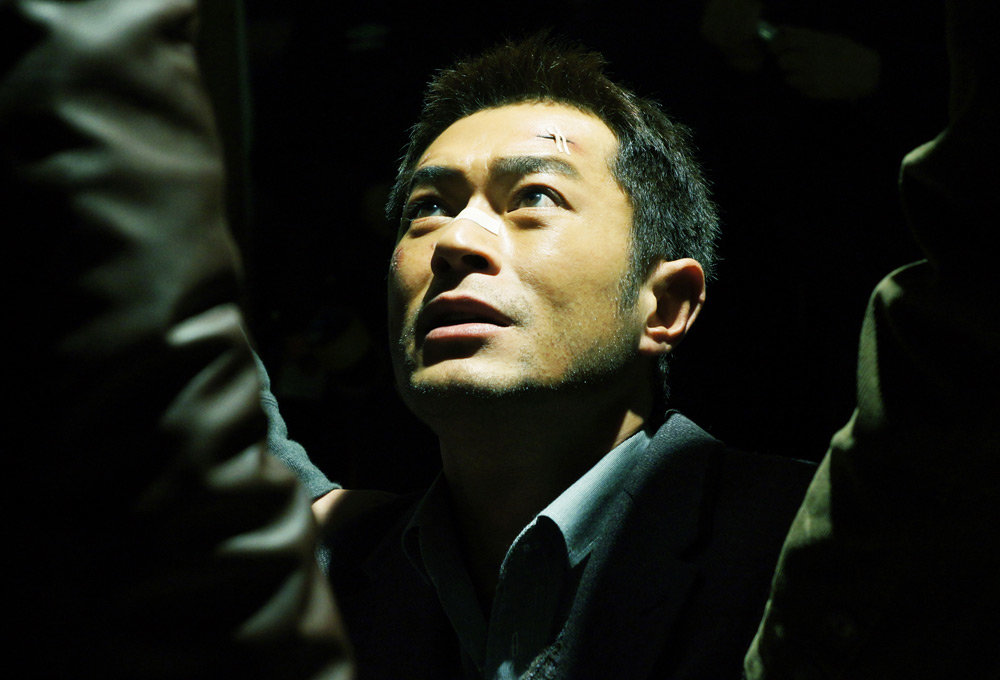 Like 2011's romcom Don't Go Breaking My Heart, this film is powered by formal play, but the material here is a corrosive but ambiguous thriller about a Mainland Anti-Drug cop (Sun Honglei) chasing down suppliers, transporters, and the moneymen forming a curvilinear connection spanning Hong Kong, going through China to South Korea and ending in Japan. Louis Koo is a loyalty-hopping Hong Konger cooking meth on the Mainland; caught by the police, he is blackmailed under the threat of execution by the State into exposing factories and ratting out his workers, then forced to go undercover with the cop to indict first a manic nouveau riche Chinese buyer and then a Hong Kong cadre of financial backers.

Drug War is made up of two panels, the first of which is a flip-flopping game of plot mechanics. Koo on one side, then the other; the Mainland cop first a policeman and then undercover as a crook; electronic dances of surveillance footage, text message codes and inter-departmental rendezvous; bag exchanges going this way and that; front men, mouth pieces and other shamming. The second panel is the same thing, but spatial: lone Koo's egoist side-swapping gets the best of him and spawns an endless shootout and massacre between cops and crooks, allowing To full reign in several set-pieces that show the director's actionwork at its best, playing with obliquely angled perspectives, lines of fire, elaborate blocking in space, ingenious use of objects, vehicles and setting. It is exciting as kinetics as it is as pure formalism, symmetrical and asymmetrical alignments and misalignments of figures in the frame, guns a-blazing or bodies crumpling (barely any blood here, presumably to conform to Chinese censorship, which this film had to be created within).

The politics are complex for such a generic story: the supremacy of Chinese surveillance, yet the disposability of their men on the ground; the merciless amoral selfishness of the Hong Kong man stuck between Mainland survivability and Hong Kong allegiances; the buffoonery of his Mainland entrepreneurial connection; the playful but pathetic gang of Hong Kong moneymen (including To axiom Lam Suet); the bizarre and moving portrayal of two of Koo's factorymen (deaf and dumb!) as the most heartfelt, canny and stylized men in the ensemble (thanks to Shelly Kraicer for making this last, incisive observation). This dancing play of genre conventions laid smoothly cinematically but with supreme ideological prickliness across the film culminates in the last scene, which perversely is also the film's trailer, of Koo being executed by the State—the film's ultimate ambiguous gesture, able to be read by audiences in two different directions at least. To's first full beachhead into Mainland filmmaking—after 2012's other partial-Chinese production, Romancing in Thin Air, also playful and a very uneasy study in melodramatic image politics—thus combines exhilaratingly articulated structural formalism with a politically ripe engagement of the meaning those images have when operating in a new world.﻿