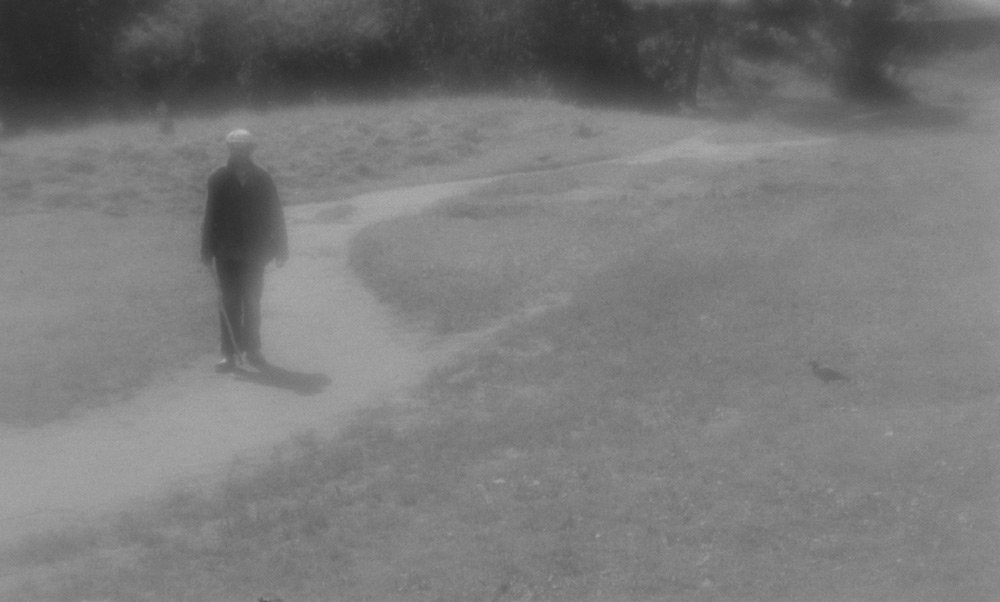 By my first afternoon in Rotterdam I had found an image that positively vibrated out of the screen at me. A dark doorway, seen obliquely in an empty frame, contained by stolid, lifeless rural architecture, cloaked in a miasma conjured from a combination of haze, a fogged lens, old film stock, and blown out whites from an open aperture. It is from Letter, a short work, not so much a documentary but a fragment drawn carefully and gently into immanence by Sergei Loznitsa, conjured from footage he shot, the program notes tell me, over ten years ago “at a psychiatric institution in a forgotten corner of Russia.” But even with no text or voice over to place and set this artifact resurrected (or projected), and a soundtrack achingly follied and sneakily dubbed, the sense of lostness, malady and asynchronicity is prevalent. Some persons, mostly old and bumbling, pursue the frame with varied purpose and activity abstracted from any life or livelihood, brief social interactions with and within the image, while others seem forever settled in it. The landscapes and buildings, like that which houses the dark doorway, are not so much inhabited as lightly entwined and then passed through by these anonymous persons, like some creeping mist. Phantoms half stuck half undone in a phantom world—lost persons from a lost society?﻿ 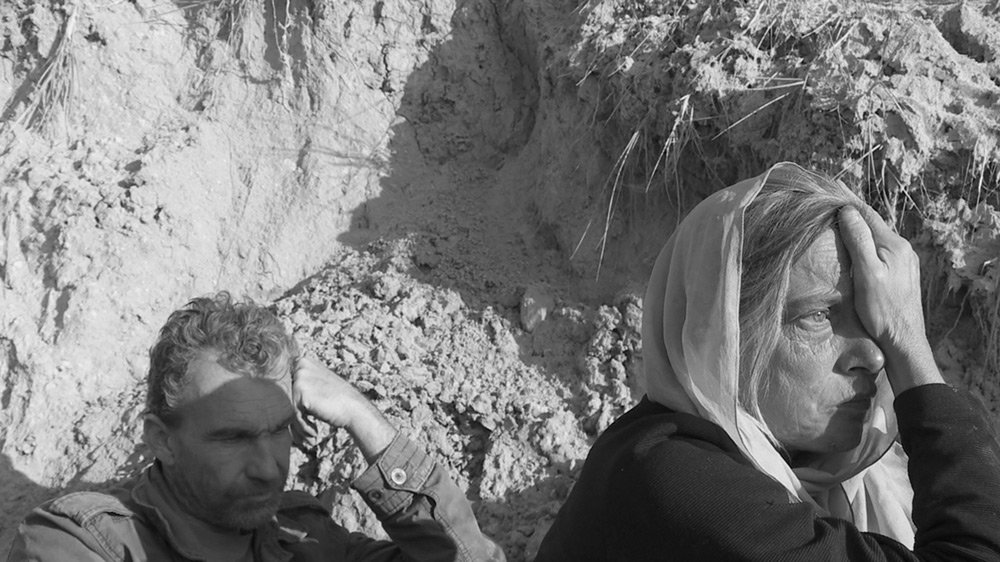 I couldn't have followed this earthily oneiric short with more direct continuity than with another experimenter transporting what is before a camera to a grander, broader plane, one even more splintered from a recognizable world. Austrian filmmaker Peter Schreiner's Fata Morgana, suffuse in its every digital pixel with impassioned anguish, abstracts a relationship between two actors into an experience, resolutely painful and searching, of two souls. Two humans fill the frames, both seemingly of the same craggy later middle age, but the woman aged physically beyond her years, and her ticks, her halting words, and most especially her eyes tell expansive but enshrouded stories of a personal history of endless crestfalls and hurt. Realism here is only digital: faces as big as landscapes, details of beard bristle and eye wrinkle beyond comparison, and landscapes themselves—German interiors, Libyan exteriors—voidlike negative space.

There is no realism in the dramaturgy, no plot, no everydayness. A rare scene of the man eating food seems a shock in a film where people don't eat, sleep, work, do—they exist, search within, ricochet glances out to search the other before turning, again, inside themselve, asking silent questions, voicing rare, fragmented thoughts. It is the strongest cinematic expression of ghost and ghostly existence I have seen. All is held, all is almost. Sentences are not completed; exchanges search for words, always abstract, to describe a real life experience and feeling that could not possibly have happened here, in the digital sheen, like an unfurling silver nitrate photography, of Schreiner's filmworld. This world is elsewhere, as are its two inhabitants.

Most powerful of all is that these sole survivors (only one other person is visible in the film, an unexplained presence in the Libyan desert) bespeak of an intimacy between the two that is deep and profound and loving—but a mystery. It is one which invokes a foreboding sense of documentary, especially because the man has a caretaker aspect to him, a difference and a kindness, in his way of of looking after the woman that is not returned in measure, and that which ties the film back to Loznitsa's Letter and infirmity...and exile. The level of dramatic abstraction feeds into this as well, evoking a piercingly vague non-concreteness to dialog, exchanges, moments, evoking dementia, trauma, amnesia. Yet this psychic-emotional-mindful/lessness shares equal time and space with the textures of faces and hands, the sharpness or whispiness of irises, the satin digital pattern of a house or a landscape. It evoked for me two distinct and different digital portraits of age, distance, and loneliness from 2012, Stephen Dwoskin's final film, Age Is... and Jean-Claude Rousseau's Saudade, taken into outer space—or perhaps no space, taken into a very psychic and intimately physical netherworld.﻿ 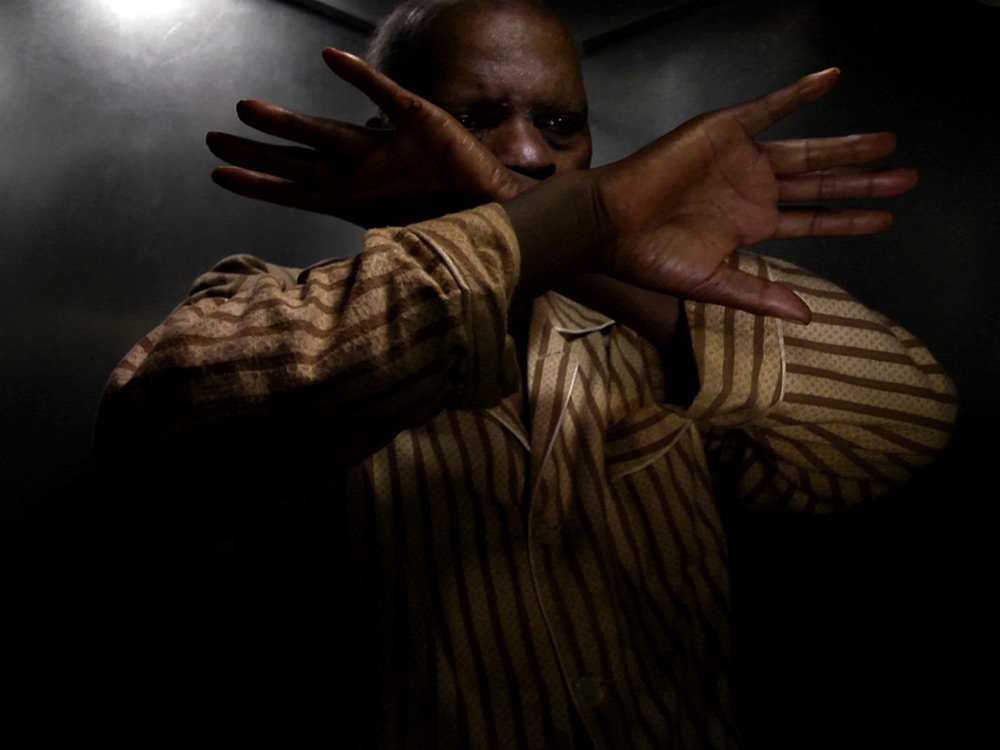 Fantastically more spatial but equally trembling on a plane of existence closer to that of phantoms than humans is Pedro Costa's contribution to the omnibus Centro histórico (along with Oliveira, Kaurismaki, and Erice), wherein the director's serial hero Ventura—whose previous adventure was 2010's O nosso Homem—visits a hospital only to get stuck in an elevator with a ghost of the Portuguese Revolution. Camo-spattered and eyes-closed, voices emanate from the soldier—ghosts or gods or devil, impersonating or inhabiting—variously accusing, reminding, praising, taunting, re-living, and otherwise haunting the man in every sense of the word. Times flatten, personal triumphs mingle with national catastrophe, history is raked and its coals and embers intermingle until the soldier seems to address every aspect of a man's existence in a place and time.

Ventura's stalwart heroism is, as always, faced with equal directness with his failings. In the elevator he stands both proud and diffident, and wasted away, brought to the ground. (In one of the short's most stunning shots, Costa calls up Lang and Ozu's direct address of his actor-characters' gaze to the camera, to the audience.) All shot in digital HD—Costa's first use of it, to my knowledge—Sweet Exorcist﻿, as it is called, shocked me anew with each image, as the director's work did upon my first encounter with it. (The sound too, after the essentially silent film homage of the leading short by Kaurismaki, is of dense starkness, musically dancing between voices and the sounds of spaces outside the frame.) The first shot verily explodes out of the screen, a frozen emanation of compositional energy, bent human form and radiating tree trunks, as Fontainhas residents call out and search the hills and foliage that have been the landscape of Costa's last shorts, all looking for Ventura.

He is to be found, dressed in pajamas and noticeably shaking, trying to leave the hospital. The payment for his treatment there seems to be this Karamazovian encounter in the matte silver elevator cube that goes nowhere in space but jumps eras, emotions, actions and inactions in voice and glance. An essay of shot/reverse-shot, each edit in the elevator is a revelation of a new attitude of Ventura to the unspeaking, re-posed statue of the soldier, who shape shifts in voice but maintains an impenetrable physical discipline. In vibrant contradistinction to the Schreiner, every moment of Costa's work, as phantasmagoric as it is—continuing the movement he began with Colossal Youth—is an audio-visual torrent springing from a very specific place in the world. When Ventura returns, exhausted, to the landscape that opens the film, one of his searching friends asks where he's been. His answer—to the doctor—calls forth a look on the young inquirer’s face that in that instant understands this social service as something simultaneously factual and invested imaginatively with a shrouded, conflicted history of hope and terror, memory and progress. A look that entirely recognizes that the elevator, unmentioned, could yet be real.﻿

Portuguese history is revisited twice over in Centro histórico, as befitting its production as commission for European cultural capital city Guimarães. Víctor Erice's documentary combined workers at a recently closed factory in the city whose existence spanned a hundred and fifty year history with a mural-sized image of workers from that factory in its canteen in the early 20th century. And in Manoel de Oliveira's wry joke of a finale to the omnibus he portrays Guimarães, and, implicitly, Portugal itself, as a vacant setting or stage in which actors act as guides to explicate history to visiting tourists. 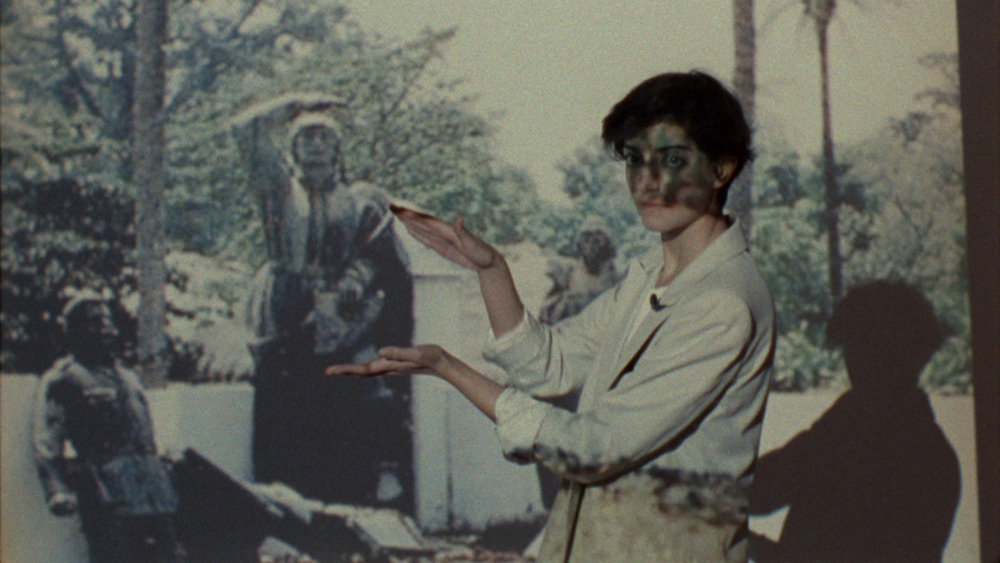 With Filipa César's Cacheu it was joyful to see a younger filmmaker and a woman—a demographic stalwartly ignored by the previous film's particular commission—try something very similar, yet invested with the image history of her cinematic precursors. The short film is a single, mobile 16mm shot recording two elements about the same thing: the deposed statues of Portuguese historical heroes from their place in the fortress of the title, located in the Portuguese colony of Guinea Bissau. The single shot is made up of a series of still images and movie excerpts about the statues projected on a wall, and a performance by a female lecturer, who presents these projections, on the same subject. The lecture initially seems to the camera but then addresses what's revealed to be an audience to the presentation; the young woman seems to be a character one moment, a lecturer the next, a character playing a lecturer, or simply the film's faux-Markerian narrator (Marker and Resnais' Les statues meurent aussi﻿ is directly cited)—or perhaps a young actress (or academic) fresh and awkward before the camera with such a text. Perhaps thus just a person reciting a spry, time spanning survey of the statues' history and movement—literally: their dismemberment and re-placement elsewhere—with her visualization offering evidence equally gap-filled but evocative of a country's colonial investment in its history and relics of violence and oppression, and the turn those relics take through time and imagery.

All the while the camera prowls, zooming into the projection to allow it to take over the frame, letting the images wash over the lecturer, turning her into a performer, re-exposing the images and their traces of cultural movement and historical memory for a second, only to lose it in the bravura motion of the camera. A remarkably clever work, its poetic ellipses and brief, unintended fiction-breaking sillinesses become part of the text and lend a sense of experimentation and bravery. Its images and images within images—mobile and not—and its youthful-hip art essay-style reading of epic history is both a casual but vivid, very much alive critique of image history, and also an auto-critique of such creations as the film itself.

It felt, finally, this movement from Letter to Fata Morgana to Sweet Exorcist to Cacheu, like taking step after step backwards further and further away from a straight record of the real world, moving from the lost to their psyche to their transubstantiated imagination to a faltering but eager image culture—with no precise stop in “reality.” Or is it a forward movement from the distance of records to that of emotions, that of memories, to that, ultimately of images layered on images? Ultimately, this movement, in whichever direction, was a powerful survey of the disturbed—souls, bodies, societies, and histories. Imperative between them is the adamant need to speak of such torment in languages that address real pain so directly that they immediately move through it and beyond it, but never truly leaving it.