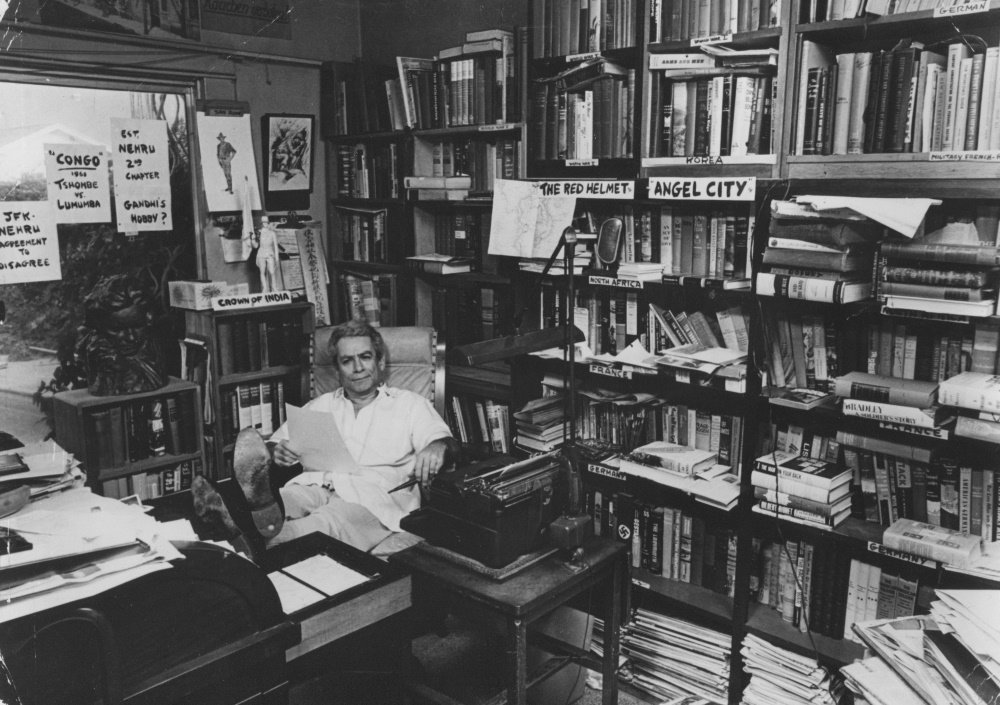 A photograph of Samuel Fuller in "the shack."

It is always well to remember that documentaries are first of all films like other films, meaning that no less than fictional narrative movies, they too have a narrative shaped by the vision of their maker and are not only about their subjects but also are that vision and the individual elements that make it up.  So, in A Fuller Life there are a number of choices that Samantha Fuller as director has made, for example to film in “the shack”—the bungalow her father kept as office and filled with his memorabilia from his days as a crime reporter, an infantryman in WWII, a writer and filmmaker; or to use her “readers” (including both actors—mostly from Fuller’s movies—and some well-chosen directors) dramatically, effectively acting their readings from Fuller’s posthumous autobiography A Third Face; or, very simply, to emphasize the things she does out of a wealth of available material.

I stress this because the subject here is by himself so absorbing.  Samuel Fuller (1912-1997) rightly holds up today as one of the great American directors even if that list is a narrow one, while his life is no less interesting, both eventful and strongly tied to the history of the twentieth century even apart from his career as a filmmaker.  It would be easy to just start writing about him and his own films when talking about this present work by his daughter, and one could quickly fill up the space just by, say, writing commentary on his war movies in relation to his own war experiences, as this is an important part of what she treats.  But as much as possible, I want to suppress my own experience of and ideas about Fuller’s work, which have evolved through most of my life, and relate that here simply to where it does correspond, contrast, or find an echo.

The reason for this is simple.  What is immediately striking is that even if one has long known Fuller’s biography, heard him talk about it in films or more personally, read A Third Face, it all becomes fresh and compelling all over again in A Fuller Life, and I can attest will remain so on repeat viewing.  That means that this movie has something of its own to offer as an individual work and it’s good to try to understand what that is.  The subject will be more than Fuller; it will be the way both his life and its artistic reflection in his work are perceived in the present by another voice.

On that point, Samantha Fuller herself appears in the film’s prologue, taking us into the mise en scène﻿ of the shack (an old manual typewriter alone is so evocative of another time and place, and that’s true of everything here) and, with her own voice, being completely up front about her love and admiration for her father, which we understand has motivated her.  But after this prologue, she is at a remove from the film she shapes, consistently allowing drama but never falling into sentimentality. She appears to have clearly recognized that it did not need her subjectivity or emotional investment to be evident for this portrait to capture the viewer.  It is a portrait in double perspective, at once true to him, but given time and distance places his rich life and career within a deeper perspective on the twentieth century than he himself could have given while he was alive.  So, it is a personal but at the same time an admirably dispassionate portrait. 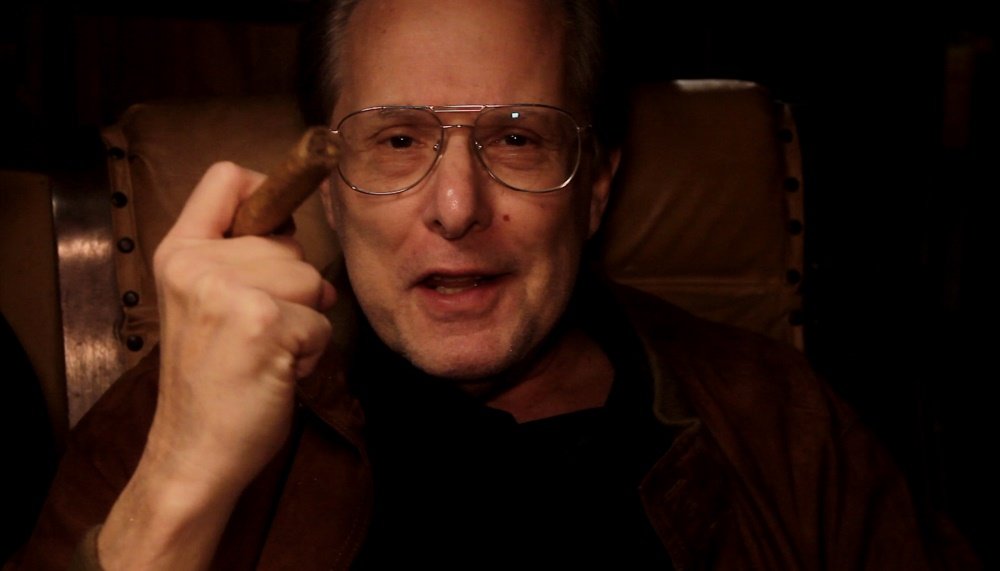 William Friedkin in A Fuller Life

After the prologue, the film is broken up into 12 parts in which the readings are done at various places in the shack, so that décor, which the camera will sometimes move to observe on its own, along with changed lighting and an imaginative use of color effectively vary the tonality.  The 12 parts correspond to smaller arcs within the larger arc of Fuller’s life experience, each given a different reader except that one segment (“The Big Red One”) is shared by four readers, the four younger leads, now impressively mature, of 1980’s The Big Red One (Mark Hamill, Robert Carradine, Perry Lang, Kelly Ward), so there are 15 readers through the 12 parts.  James Franco sets the tone in “Copy Boy” as a young Fuller begins his career as a newspaperman while William Friedkin finishes with some reflective summary (“My Ballsy Yarns”).  Very welcome is elegant Constance Towers, one of a fair number of actors and actresses who hit career highs in their Fuller movies (for her 1963’s Shock Corridor and 1964’s The Naked Kiss—movies no one should live without seeing!).  But most surprising is that the directors (Friedkin, Joe Dante, Monte Hellman, Wim Wenders make up an imposing group of filmmakers who, in the spirit of Fuller, each followed his own road) act their readings as much as the actors and with no less dramatic skill—though I would allow no one here gives a more powerfully theatrical reading than Bill Duke, who gets the Ku Klux Klan material as part of  “Freelance.”  It is very fortuitous that to Hellman fell the concentration camp segment from the liberation of Falkenau (complete with what the film tells us are Fuller’s own first movies)—his voice and bearing are exactly right here, judiciously understated but emotionally resonant as one would expect from him, while Friedkin possesses an earnest intellectual authority that shines through at the end.

A fair number of cigars are brandished among the participants, an enjoyable touch in line with the punchy style of the film’s organization, visuals and dominant mode of the readings.  However, this present of the film is tempered in relation to the older archival footage, which has the gravity of history, as well as clips from Fuller’s movies, which will always be highly individual no matter how brief.  And it is in between these past and present images that one will find the deeper style and meaning of the present film in relation to the subject.

Here I will digress a little to Sam Fuller’s own films because what they are and the way his sensibility is inflected do play into what the present movie finally becomes. The components of Fuller’s body of work in terms of subjects were set in the first period of his career from 1949 to 1964, which consists of no fewer than 17 movies ranging simply from very good to great (paradoxically, he still seems freest in this era of studio-dominated filmmaking, while his later career, like that of many of the best directors of his generation, is more checkered, though yielding his dream project The Big Red One and the stunning and heartbreaking, too little-known anti-racist drama White Dog in 1982).  There are essentially three kinds of films—crime dramas, which drew from his early background as a crime reporter; war stories, again reflective of his own experience in the First Infantry; and Westerns.  That he is always comfortable with the crime dramas and war movies is no surprise, and they account for many supreme Fuller works.  But he found no less personal and striking a place in the Western.

Fortunately, he made his Westerns within the period at which the genre was at its peak, and could carry anything an artist wanted to put within it.  So, if they are not directly from his personal experience, they are ideal as vehicles for his ideas, and that’s especially evident in Run of the Arrow (1957), an interesting movie to think about in relation to A Fuller Life.

Run of the Arrow﻿ is a movie about national identity—very characteristically, Fuller doesn’t express this through a protagonist easy to invest in.  The bitter Irish Southerner, O’Meara (Rod Steiger), a Confederate veteran who goes West to live with the Sioux, rejecting what is now hopefully a United States of America, his own country, is the opposite of Fuller himself, who put his life on the line for America as a soldier, believing idealistically in his country while always seeing all of its ills, especially racism, intolerance and marginalization (in all this, Fuller is not unlike the old master John Ford, who he admired and who encouraged him—a relationship pointedly alluded to in A Fuller Life). Run of the Arrow﻿ has imagery that appears to deliberately evoke Ford though Ford would not have done a character like O’Meara and that is one way the two directors are different.  Still, Fuller wins sympathy for the character (and Rod Steiger, though he may have been hard to direct, is conspicuously effective in so unusual a role), making his torturous journey back toward the country he rejected as challenging as if Fuller were presenting his own view from his own side.  The movie ends with a provocative written title “The End of This Story Can Only Be Written By You.”  Close to 60 years later, as we watch A Fuller Life, that’s still meaningful though it has to be in a different way.

As Fuller fans know, his unusual style has elements that one would not expect to see together—no one would now wish away the pulpy, sometimes crass and vulgar side of his movies, which co-exists with passages of great sensitivity and tenderness as well as a sophisticated aesthetic sense that so often aligns him with modernists like Godard and others coming out of earlier Cahiers du Cinéma﻿ (who, of course, were quick to notice these things about him).  But when he finally did get to film The Big Red One, there is a more contemplative Fuller behind it than might have been the case earlier (evident in a reconstruction with restored sequences as well as the original release).  And it is this contemplative tone with which A Fuller Life﻿, for all its cigars and dramatics, is more deeply aligned.

It is 2014 and even if his films will always have present vividness, Samuel Fuller’s life, with all the deep experience he had, is of the last century, the twentieth century. Sadly, the ills that he yearned for America to overcome have not gone away, and even as intolerance and racism remain rampant and seem to have sustained breeding grounds, there has also been a reversal whereby the United States held the moral high ground in WWII but now does its part in initiating and perpetuating war, with its drone strikes, its own share of jingoistic righteousness—and as an infantry hero always on the front lines, Fuller came to observe clearly that all war is insane and barbaric and there is nothing in it to romanticize even a little.  “The End Of This Story Can Only Be Written You” seems a challenge that perhaps we can now only mourn.

So in her relationship to the content of her film, as well as in its style—in what it becomes as an organic whole—Samantha Fuller is rightfully finding her own voice in her own time, one really owing more to that meditative spirit that always lingered within the tough, take no prisoners artistry that courses through Samuel Fuller’s own movies like an electric current.  But like her father, no matter the perspective that emerges in the retelling of his story, she is not one to brood but rather, like him, to seek a bracing honesty. 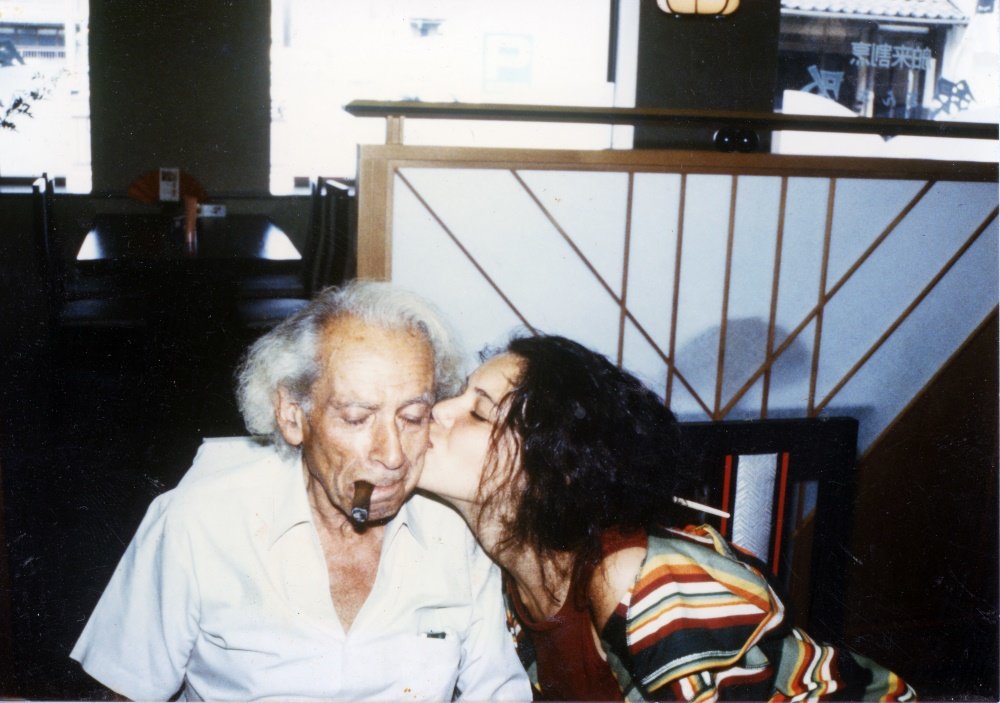 A photo of Samuel and Samantha Fuller