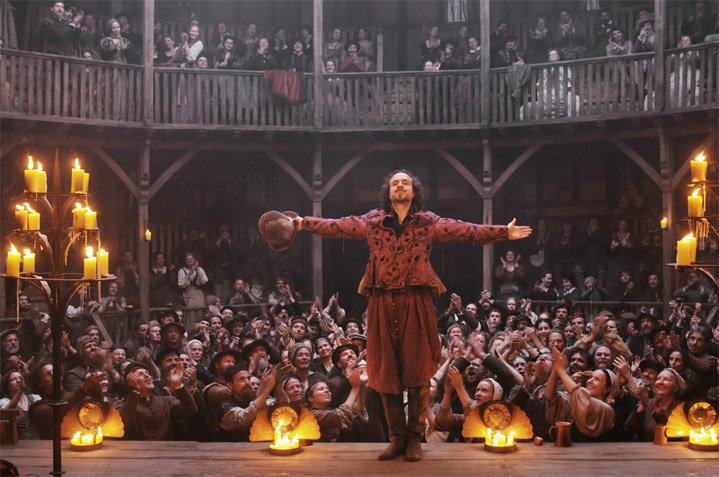 "All art is political, otherwise it would just be decoration," proclaims sad-eyed Edward de Vere (Rhys Ifans) in Anonymous. "If artists didn't have anything to say, they'd make shoes."

You almost expect him to add: "So you see, there's more to the films of Roland Emmerich that you thought!"

And then: "I'm a stand-in for this film's director. Get it?"

After all, it's difficult not to think of de Vere—a neglected genius who collects curios and writes plays in which prominent cultural figures (in this case, his enemies in the royal court) get killed before a cheering audience—﻿as an alter-ego for Emmerich, a stealth artist who collects kitsch and directs movies where pop culture landmarks are obliterated before forgiving summer moviegoers worldwide. de Vere spins his personal vendettas into enduring poetry; Emmerich has turned his Pop Art aspirations into lucrative spectacle, vaporizing the White House on two separate occasions (Independence Day and the batshit-crazy apocalypse smorgasbord 2012) before a paying audience.

As many critics have pointed out, the Oxfordian Theory—﻿the literary conspiracy yarn at the center of Anonymous—﻿﻿is crap. Of course it is.﻿ First introduced by J. Thomas Looney (﻿a really unfortunate surname if you're going into the conspiracy theory business) ﻿in 1920 and spun into its current unwieldy shape by Looneyites like Percy Allen and Paul Streitz, the whole thing turns around the idea﻿﻿ that the most mutable texts in the English language can only truly be understood through the biography of an obscure 16th century aristocrat. "Shakespeare" is just a front for Edward de Vere, 17th Earl of Oxford, and, regardless of what you may think, Hamlet is really just about de Vere's relationship with the father-and-son political duo of William and Robert Cecil.  Throw in later embellishments—﻿﻿﻿including incest—﻿﻿﻿and what you end up with is a knotty, lurid melodrama disguised as literary scholarship. Said knotty, lurid melodrama doesn't hold up to close scrutiny, but it does make a pretty damn good plot for a movie: stripped of all power, a nearly bankrupt earl turns to writing plays pseudonymously as part of an elaborate political chess game against his opponents.

Roland Emmerich originally enrolled in film school as a production designer, a fact that's on full display in his thesis film / debut feature The Noah's Ark Principle, a slow-as-molasses Ridley Scott knock-off that seems less a movie and more a record of its own resourceful special effects and art direction (produced on the modern equivalent of $1.2 million, it's probably the most expensive student film ever made, but looks like it could've easily cost several times more).  Since then, he's gravitated to lavishing his attention on show-offy moments of spectacle while directing dialogue scenes with increasing diffidence—﻿﻿﻿a tendency that sort of reaches its apex in 2012, a movie where hyper-detailed panoramas of mass destruction are intercut with indifferently framed, frequently ugly-looking shots of actors.

So, in a sense, the knicknacky mise-en-scène﻿ of Anonymous represents a return to Emmerich's roots. Images are stuffed with "period" details; you get the sense that, if Emmerich could add footnotes to every shot, he would. Like a lot of contemporary period films, Anonymous presents a past that's almost unreasonably filthy (a decades-long reaction to the impeccably-clean Romes and Old Wests of the 1950s?), and it wallows in this filth: Queen Elizabeth has hideous teeth, Edward de Vere and Henry Wriothesley﻿ balance on planks while crossing a muddy street, and everything looks dank and damp. Like the Oxfordian Theory itself, it's scholarship gone berserk—﻿﻿﻿﻿a bit of research growing, tick-like, into a fat, overwrought notion.

And it's not unreasonable to think that it's the "overwroughtness"—﻿﻿﻿﻿﻿not the scholarship—﻿﻿﻿﻿﻿that attracts Emmerich. Emmerich is notorious for building films around pet causes and then, at best, paying lip service to them; he may be serious about global warming, but it probably wasn't the urgency of the cause that lead him to make The Day After Tomorrow—﻿﻿﻿﻿﻿﻿it was the ability to engulf the Statue of Liberty with a tidal wave. Similarly, the original impetus behind Anonymous might have been Emmerich's serious interest in Oxfordianism; the film even has noted Oxfordian Derek Jacobi—﻿﻿﻿﻿﻿﻿﻿probably the only person to ever act in a Roland Emmerich movie out of principle—﻿﻿﻿﻿﻿﻿﻿on hand to introduce the plot (Jacobi's prologue, by the way, bears a passing resemblance to Peter Greenaway's The Baby of Mâcon﻿). But the locus of the movie isn't a serious consideration of the Oxfordian Theory, which gets played for maximum melodramatic fun, but the persona of de Vere﻿ and Emmerich and screenwriter John Orloff's conception of Elizabethan theater.

For what it's worth, Emmerich's idea of Elizabethan drama—﻿﻿﻿﻿﻿﻿﻿﻿as a sort of violent, spastic drag show—﻿﻿﻿﻿﻿﻿﻿﻿is remarkably consistent with his Pop-blockbuster sensibility. Emmerich and Orloff's "Shakespeare" / de Vere is a great artist not because he lucidly expresses some universal truth, but because of the effect he has on a mass audience. Consistent with this whole idea, Anonymous contains more shots of the audience reacting than of the performers acting.

This creates a sort of internal conflict: Anonymous is trying to celebrate obscurity and populism at the same time. Great art is that which affects the most people, but great artists don't come out and take bows. In one of many (largely funny, sometimes grating) parallels Emmerich and Orloff draw between the Elizabethan stage and the modern American film industry, de Vere's front, actor William Shakespeare (Rafe Spall)—a barely-literate buffoon whose only interests are booze, big breasts and bear fights﻿﻿﻿﻿﻿﻿﻿﻿﻿﻿—﻿recites a parody of an Oscar acceptance speech after a performance ends in a standing ovation, taking all of the credit for de Vere's work.

Per Anonymous, the formula for "great art" must then be: that which is at once faithful to what its audience wants (in de Vere's case, plot twists, pretty words and political wish-fulfillment, with unpopular hunchback Robert Cecil killed off in the guise of Richard III) and its own secret agenda. Again, it's hard not to see this as self-vindication: Emmerich works out his arty side by making the most expensive Pop images in history and giving Jaye Davidson $1 million, and millions of people are able to enjoy popcorn and air conditioning to it. Or, to put it another way: a movie about the lowest form of criticism, biographical interpretation, is custom-built to invite biographical interpretation. It lays its own Oxfordian trap: if Richard III is Robert Cecil and Hamlet is political, then the theater must be cinema and Edward de Vere has to be Roland Emmerich...

Layered beneath a story about secret agendas is a secret agenda that, like all of that peripheral period bric-a-brac, constantly calls attention to itself. Confused yet? Art as a combination of catering to mass sensibilities and following personal goals, the creation of the English language's most enduring works as flashback-filled high camp, great poets as broody shut-ins—﻿visions don't get more ludicrous, recursive or consistent.