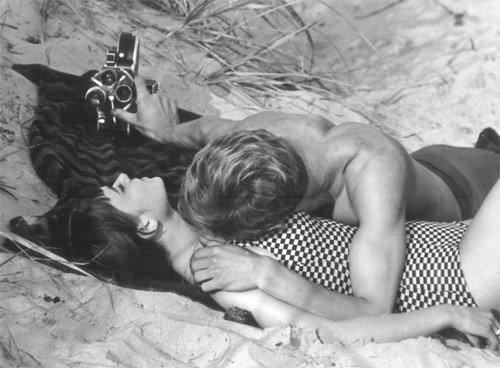 Rarely has half a year's wait been so richly rewarded. Early in August 2009 Jack Stevenson had promised a review copy of his forthcoming book "Scandinavian Blue," to be published by McFarland & Company, and dealing with a highly Ferronian subject: "The Erotic Cinema of Sweden and Denmark in the 1960s and 1970s." Still, I had nearly forgotten about it, when it finally arrived this March: But whatever the reasons for the delay, I'm sure they were good. Because as it turns out, Stevenson's book is not just an exhaustive and long-overdue study of a chapter in film history that by now mostly lives as a cliché of semi-trashy sixties liberation memorabilia, but doubles as one of the most timely political essays around.

Which is not to say it doesn't deliver as a connoisseur's chronicle of erotic esoterica, delving deeply into the more demented side of sexually charged filmmaking. Entire chapters are dedicated not just to rightfully canonical classics of Scandinavian sensuality, but also to such recently reappraised mondo madness models like Sweden: Heaven or Hell? (1968, an Italian suicidal-swinging-Swedish "exposé" by Luigi Scattini, famously featuring the Muppets nonsense hit song "Mah Ná Mah Ná"), Vidal Raski's perverse and pertinent exploitation extravaganza The Sinful Dwarf (1974, about the malicious misdeeds of poor perv-dwarf Olaf), the Tarantino-quotation-approved, icily twisted rape-revenge-art of Bo Arne Vibenius' Thriller: A Cruel Picture (1974) or the curious attempts of Hong Kong's Shaw Bros. imperium to cross over into Scandinavian sexpot territory (like Lu Chi's failed, but fascinating 1972 bawdy comedy Sexy Girls of Denmark or the talented Kuei Chih-Hung's tainted 1974 women-in-prison-classic Bamboo House of Dolls, both featuring sexy Danish starlet Birte Tove). More importantly, Stevenson illuminatingly discusses relatively little-known (outside their home turf at least) productions like Paul Nyrup's truly trashy trilogy of Danish sex-and-crime Z-productions—Days of Sin and Nights of Nymphomania (1963), Copenhagen Call-Girls (1964) and City Street "Heroes" (1965)—or the early erotic efforts of the great Mac Ahlberg, by now probably better known as director of photography on mainstream Hollywood films like Oscar (1991), Beverly Hills Cop III (1994), the Brady Bunch movies or various horror highlights, including several Stuart Gordon masterpieces from Re-Animator (1985) to King of the Ants (2003). (He's hardly the only famous name with sexploitation roots to appear on Stevenon's pages, as examples let's just throw in Swedish thesp Stellan Skarsgård and Danish director Gabriel Axel, who went on to collect the Oscar for best foreign movie in 1988 for Babette's Feast. That info is correctly reproduced, but this is a good opportunity to note the only apparent flaw of Stevenson's book are some erroneuos facts—curiously concerning mostly things you can easily research these days on the (otherwise-not-always-trustworthy-on-such-matters) internet: for instance, Alf Sjöberg's Miss Julie shared the Grand Prize in Cannes in 1951, and did not win a Grand Prix in Venice in 1952, as Stevenson claims. But hey, you can look that stuff up easily on the internet yourself, so let's be thankful that the author is more excacting in those unexplored areas where it really counts.)* And also, yes, there are those 95 beautiful black-and-white stills, which certainly have their charms as well. Let's feast on an example. 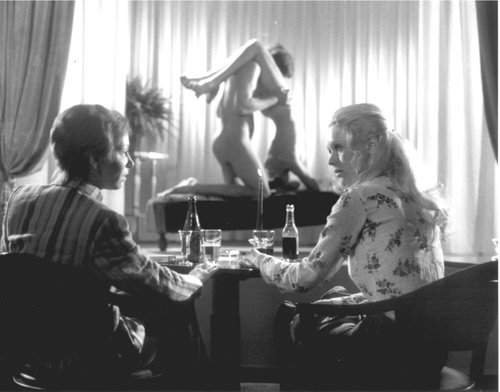 "Birte Tove (right) and friend yawn their way through a typical Danish night out in Between the Sheets," reads the accompanying caption opening Stevenson's paperback, indicating there will be no lack of humour on the ensuing pages—when appropriate. For make no mistake, this is a serious and even difficult (though, thankfully not as far as the unacademic, brisk prose style is concerned) endeavour: Stevenson's old-school trash cinephilia may make for (welcome) digressions now and then, but his thoroughly researched chronicle is even more diligent in following the battle lines as a taboo-busting sex (movie) industry challenged laws and opinions in bourgeois societies. His analyses yield salient insights on the (political) prize of individual freedom, something that's increasingly curtailed these days. One of the most valuable realizations is that the legal and social skirmishes surrounding erotica and porn have always been an ambiguous area. "To 1966: Birth of a Mythology" is the apt title of the first part of the book: Take, for instance the myth of democratic Denmark, a society with socialist leanings, whose liberalism allowed to pave the way for making out in public, which, it has turned out, is not at all the same as making the private public—and by now we have a state whose purportedly progressive liberalism has turned increasingly right-wing in the last decade without undergoing inordinate changes. (A striking example from "The Players," one of Stevenson's rich appendices: Among the further biographies of major figures outlined there is that of Louise Frevert, former actress in succesful sex series and hard-core pictures, by now spokesperson for the far-right Dansk Folkeparti, the most conservative group in the government—amongst her proposals: to make folk-dancing mandatory in Danish schools.)

Although nominally, Stevenson's chronicle stretches from the "risqué" arthouse breakthroughs of Arne Mattsson's moving One Summer of Happiness (1951) and Ingmar Bergman's Summer with Monika (1953) to Heinz Arland's hard-core "passing of an era" landmark Summer With Vanja (1980), it very much speaks to the here and now: Clearly, the seasons have changed. Of course, you'll also be doing yourself a film-historical favor by taking in Stevenson's accounts of the histories surrounding still-classic works by great filmmakers like Mai Zetterling, Vilgot Sjöman or Joe Sarno, as well as unfairly lesser acknowledged achievements such as Shinkichi Tajiri's and Ole Ege's Bodil, a Summer Day in 1970 (1970), a short, lyrical ode to porn actress Bodil Joensen's bestiality-prone life in her reputed and disputed farm utopia. And there's the additional joy of exploring some genuine weird excesses, sometimes dubious documentary excursions and—never underestimate the power of profit in the sex success story—the pivotal money-spinners from Scandinavia like Ahlberg's I, a Woman (1965), whose phenomenal American box-office payoff made a huge profit for US rights buyer Radley Metzger, while producer-writer Peer Guldbrandsen was left to curse the flat-fee deal he made. Neither did that film make "the next Garbo" out of arresting actress Essy Person, even as her (domestic) legend overshadowed her subsequent existence. Let's pause to contemplate this example of specious succèss de scandale promises, aided by the following still. 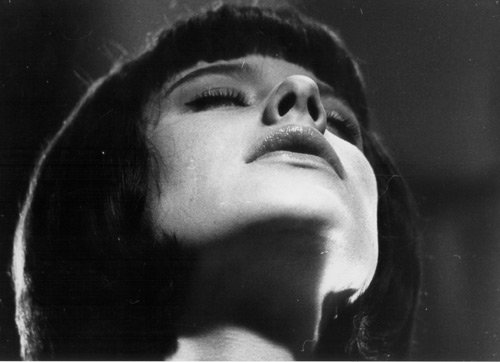 Similarly, Stevenson's journey through part two ("1967-70: Censorship's Last Stand") and three ("1971 and Beyond: Total Freedom in Fact and Fiction") hardly qualifies as a triumphant tale of transcending conservative barriers: If anything, it rather shows how both Left and Right may quickly mobilize reactionary sentiments when confronted with the notion of a freely sexualized society—then as now. I finished Stevenson's book on a holiday: Returning to Vienna, I found the national papers the middle of another highly hypocritcal debate about sex, art and politics, sparked by the fact that an artist had invited a swinger's club into the museum: "Score another one for Ulrich Seidl," I thought, but I was also overtaken with Scandinavian Blue déjà vu. In that context, it's also worth noting how, despite the supposedly ever-more-secular character of our (Western) societies, the boundaries of Christian-bourgeois culture still apply, even as their force is denied in the name of an alleged, lip-service "liberalization." Certainly it means something that the most controversial item discussed by Stevenson was actually never made: After his Henry Miller adaptation Quiet Days in Clichy (1970) turned him into a media star, Jens Jørgen Thorson announced his next project would be a pornographic film about Jesus. Chaos ensued.

As Stevenson also connects the quarter-century of sex filmmaking in focus to current trends, a similar strain in art becomes clear. Films like Thorson's Quiet Days in Clichy, Sjöman's in some respects proto-Dogmeish I Am Curious (Yellow) (1967) and Palle Kjærulff-Schmidt's in some respects proto-Idiotsish (s)existential self-evisceration Weekend (1962) are acknowledged influences on Lars von Trier, whose Zentropa productions also operates a pornographic daughter company, Puzzy Power (and whose occasional co-director Morten Arnfred is a venerable veteran who started as cinematographer on Ole Ege's 1972 hardcore-porn-slapstick-art-crossover Bordello). And it doesn't take much effort to see the connection between Knud Leif Thomson's controversial, corrosive attacks on the moral decay caused by sexual libertinage like The Duel (1962), School for Sucide (1964) and Venom (1966) and Lukas Moodysson's recent A Hole in My Heart (2004). But the operative point here is how the pronounced reactionary tendencies of these contemporary successors are sidelined—admittedly it's more murky territory with the ever-canny meta-manipulations of von Trier, usually distracting with side contradictions, but the case of Moodysson seems a prime example of alarming and regressive sentiments arising from supposedly open-minded and "liberal," you know: the best, intentions. What "Scandinavian Blue" repeatedly makes clear, amongst other things, is how many political concepts have become empty labels that are still used unthinkingly and misleadingly, with destructive results, since their contemporary relevance has been twisted beyond recognition. It's not only the sex we still need to come to terms with.

Signed for the Ferroni Brigade:

The Other First Secretary
Christoph Huber

*The author informs us that these mistakes will be corrected in the next printing.