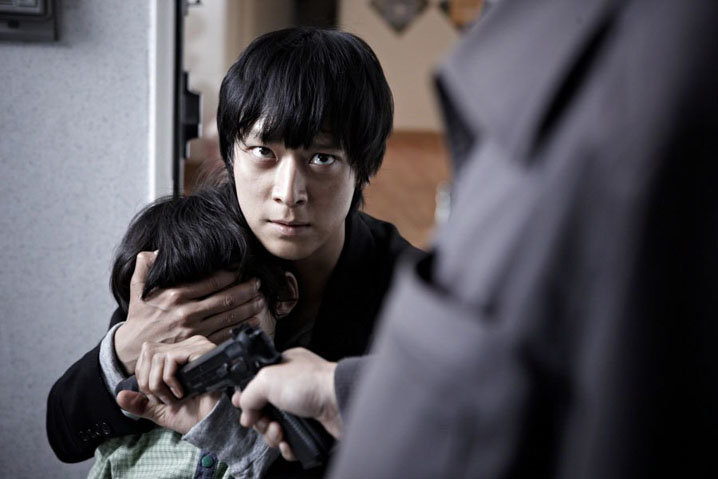 The season for listing and awarding begins this week and will dribble on through at least the end of February, that is, until every last Oscar is handed out on the night of the 27th. Sight & Sound has polled 63 critics, asking for their films of 2010, and, while the BFI's publication hasn't posted the resulting list on its site, Kenji has it right here; it's one of these handy MUBI lists with every title linking to the film's respective page. At any rate, topping this poll is David Fincher's The Social Network, followed by Apichatpong Weerasethakul's Uncle Boonmee Who Can Recall His Past Lives. On that list's wall, by the way, David Ehrenstein has posted his 2010 list.

"Writer-director Jang Hoon's satirical thriller Sworn Enemy [also known as Secret Reunion; image above] on Friday took home Best Picture honors at the nation's most prestigious film ceremony, the 31st Blue Dragon Film Awards," reports Song Woong-ki in the Korea Herald. "Headed by the duo of heartthrob Kang Dong-won and veteran Song Kang-ho, the film about an ex-North Korean field operative-turned-defector (Kang) beat out some of the year's top-selling films.... The film's win comes at a time when the nation is still reeling from the North Korean shelling of the remote island of Yeonpyeong off the western coast near the Northern Limit Line.... The night's biggest sweep, however, went to Moss, which grabbed a total of seven awards including Best Director [Kang Woo-seok], Best Actor (Jung Jae-young), and Best Supporting Actor (Yu Hae-jin).... Best Actress went to both Yoon Jung-hee for Poetry and Su Ae for Night FM, while the supporting prize went to Yoon Yeo-jeong for The Housemaid.... Won Bin's ultra-violent The Man from Nowhere was on the receiving end of the night's biggest snub, winning just a sole technical award out of nine nominations."

HanCinema has the full list of winners and related linkage; YeinJee's Asian Blog has pix from the evening and allkpop has video.

The Film Society of Lincoln Center's Scrivere Il Cinema: The Films of Suso Cecchi D'Amico runs through Wednesday and James van Maanen has a brief overview: "Born Giovanna Cecchi, Suso was responsible for many of the finest film of her day — a day which lasted from 1914 through 2010 (she left us only a few months ago). Working with and for De Sica (on Bicycle Thieves, Miracle in Milan and more) to Visconti (Senso, Rocco and His Brothers and The Leopard, among others), Antonioni, (Le Amíche) and Monicelli (Big Deal on Madonna Street), her range and interests were wide and her talent deep and true."

Anthology Film Archives is screening films by and with Charlie Chaplin all day long today. The New Yorker's Richard Brody on Police (1916): "A convict, upon his release from prison, is fleeced by a pickpocket disguised as a clergyman. Finding himself homeless and penniless, the freed man meets up with a former cell mate and agrees to join him in a burglary, but their break-in quickly goes awry when the police show up. Since the movie is directed by, and stars, Charlie Chaplin, it's a slapstick comedy, but the graceful gags and antic glee do little to lessen the air of desperation and injustice."