“I'm very comfortable with the nature of life and death, and that we come to an end. What's most difficult to imagine is that those dreams and early yearnings and desires of childhood and adolescence will also disappear. But who knows? Maybe you become part of the eternal whatever.”

There are films that bear in their frames the traces of an epoch, evoking the mythical dimension of collective memories, of mass-consumed rituals. Since its social origins as a marketable target group, adolescence, from the early 50s onwards, has been a repository for branded adventures, fabled romances and (un)forgettable first-times. Thanks to the hypnotic wealth a fattened middle class started to enjoy in the aftermath of a very profitable Second World War, for the first time in human history, a considerable slice of American youth had substantial spending power at its disposal. Family life and a steady, respectable job could now be postponed for a little, enjoyable while. Hordes of heterosexual white youngsters (the Black, Jewish, Latino and Gay markets still laying untapped in McCarthy’s America) invaded fast-food restaurants, drive-ins, beach resorts and consumer culture at large. Come the early 60s and this colorful and overexcited bunch found a representational space on the big screen. Scowling, leather-jacketed wild types á la Marlon Brando made way for clean, college-educated good-family-boys; a mild and tolerable disobedience replaced angry transgression. (White) rock ‘n’ roll and beach parties supplanted roaring motorcycles and fistfights. William Asher’s Beach Party (1963) incarnates this fresh, youthful America that with the annexing of Hawaii and a growing economy could now afford the exotic dream. Forever it almost seemed… 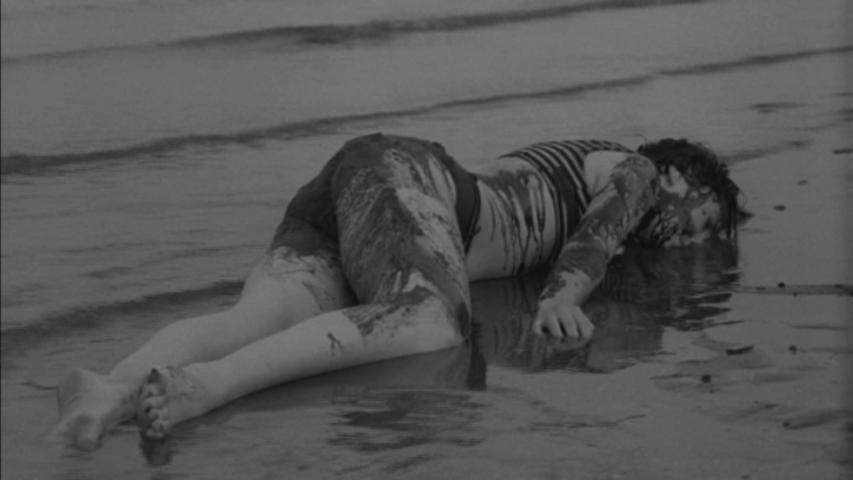 Above: The Horror of Party Beach.

Thankfully an army of monsters awaited this cheerful group of squeaking blondes and their clean-shaved boyfriends at a late night show of their local drive-in.  Just a year later, in fact; with The Horror of Party Beach (1964) the exploitation filmmaker Del Tenney—surfing contrariwise the newly ignited wave of beach movies—slapped in front of the fearful and innocent eyes of those unaware teenagers the repressed horrors, the ugly b-side of their candid dream.

In Harmony Korine’s Spring Breakers this duality coalesces into an magmatic whole, the (American) dream is broke and can no longer afford its preposterous innocence. Good and evil, so to speak, are part of the same generational experience, two hearts beating as one. The spring break costs money, and cash is at a premium in post-collapse America. So the film's fearless angelic misses reach for their holsters in order to finance their craved break and in a masterful sequence raid a diner advancing in parallel in and outside of it. Away from the neon-lit routine of their suburban isolation they're now catapulted into the sun-lit togetherness of a pornographic beach party that Korine lenses in epic slow motion with the dilated beats of dubstep as spasmodic backdrop. From the structured tedium of daily life to the institutional transgression of an endless, elated spring break. The film neglects temporal linearity to describe the disoriented impetuosity of teenage exuberance when yes, even a banal vacation is invested with celestial anticipation. To the four ardent girls the spring break is a matter of quasi-spiritual fulfillment, the same one that one of them unconvincingly chases back home while listening to a neurotic, evangelical charlatan. There is no irony or condescension in the way the film captures this atavist fervor, it is the religious spell of materialistic tribalism that the young kids are under. The spring break is one of those capitalist liturgies like Black Friday where the gods of profit are thanked and praised. Black Friday celebrates wealth and its obsessive accumulation; the Spring Break is the relief valve. It is an authentic and eruptive ritual, the film divinely transmits, that transcends its socially engineered nature. Benevolently allowed for once to break the rules, these future family men, housewives and assorted professionals scream into a cultural void their deaf rancour camouflaged as joy. The floral motives and phoney love stories that populated the 60s beach movie have now warped into plastic orgies of excess (notably vulgar but safely chaste) desperately trying to exhaust an unfathomable, mounting pressure. An uncanny feeling conveying both a sense of initiation and impending doom haunts the film, as if dying and dreaming responded to the same anxious impulse. 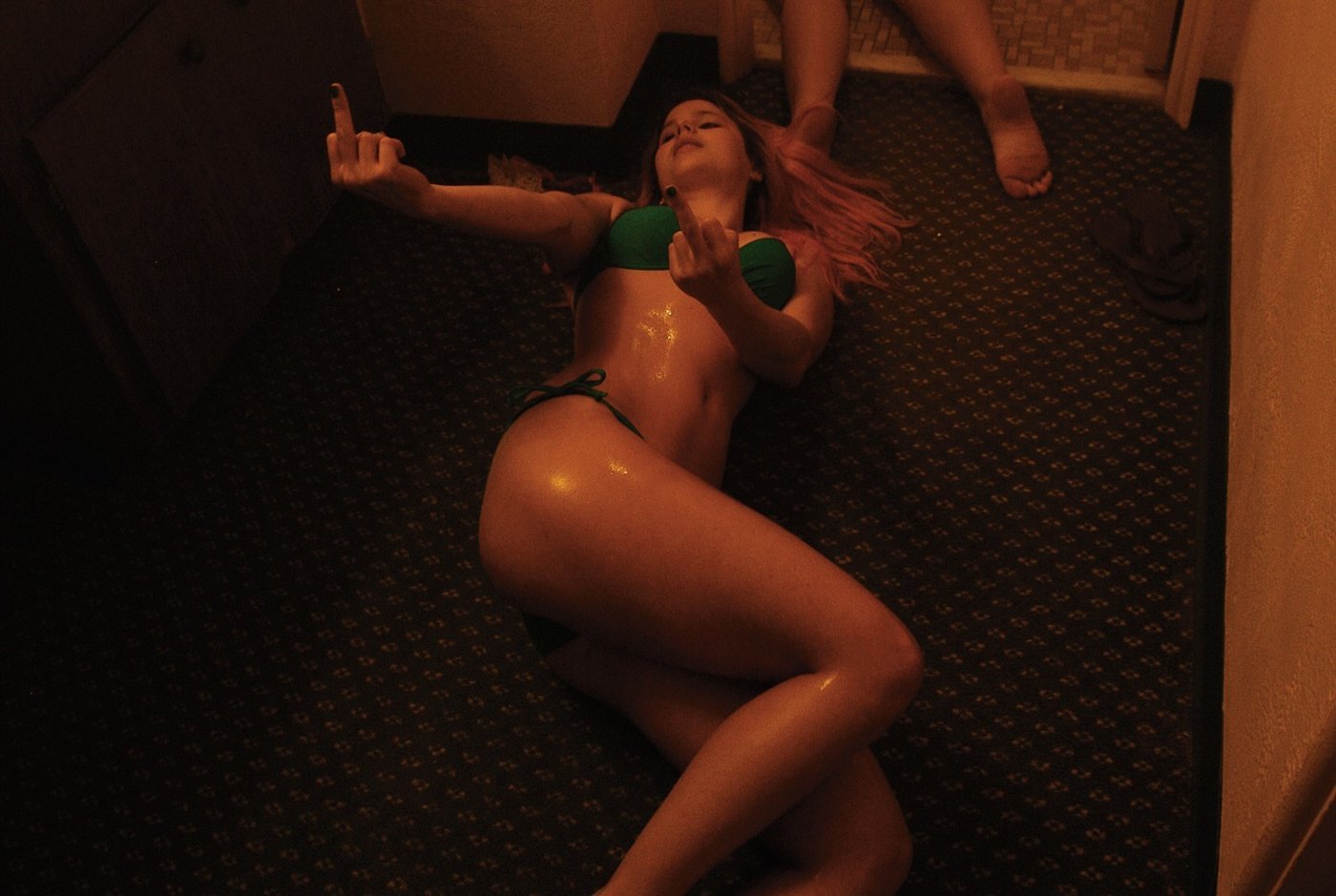 Above: The Ecstasy of Beach Party.

As the film takes a supposedly dark turn halfway through—when our four heroines are first jailed and then bailed out by a gold-plated gangsta entrepreneur—its poetic fortitude grows in coherence. Their coming of age is faced by the criminal implications innate in their (American) dream, which far from being some sort of side effects are an intrinsic part of its very essence. To afford a perpetual dream state you have to make money and if that means killing…so be it. The elegiac tone of the film in fact does not change. Once determined to fully live their spring break, the two remaining girls embrace the violent side of their adventure with the same innocent abandonment. Scenes of felonious violence are shot with the same epic, euphoric devotion culminating in what is perhaps the most suggestive sequence: the gangsta rapper singing a Britney Spears’ tune at his beachfront piano as the girls dance in an idyllic sunset holding each other through their rifles. Love and violence like in Malick's Badlands are inseparable, only hypocrisy can tell them apart. Innocence seamlessly slips into predatory ambition. Spring breakers forever so they are, finally at ease with the authentic nature of their nightmarish dream. The gangsta entrepreneur character represents their ultimate aspiration, an accomplished individual (“Look at my shiiit! This is the fuckin’ American dream!”) enjoying the luxury that successful businessman such as himself can afford. He quite literally is an eternal spring breaker. Outliving his martyrdom so as to fulfill the final oblation is how they bring to a close their generational catechism. "I'm starting to think this is the most spiritual place I've ever been," says Faith at some point.

From the thoughtful detachment of his 39 years Korine realized a full-bodied work that captures the holy, restless longing of eradicated teens naively expecting to live an expired dream. Unlike his previous oeuvre, where a sweaty self-involvement precluded the formation of a mature poetic stance, in Spring Breakers the director looks at teen life with the eyes of an adult. From this perspective Korine comprehends all the grandiose and empty tragedy that adolescence is, that liminal, painful interval between wide-eyed stupor and jaded cynicism. He undresses the modern Disney icons to expose the rot they usually conceal. Spring Breakers is the last(ing) beach party of a country too terrified of adult life to grow up while inevitably having to come to terms with its dark side. Through an a-temporal, sensorial trance the director stares in awe at the horror vacui of a lost civilization, staging the ecstatic freefall of moral dissolution. It is not by chance that the ex enfant prodige had in fact debuted with a post-apocalyptic film exploring the margins of a crumbling nation. In Spring Breakers the same post-apocalyptic tone remains, only the angle changes. Like a mantra, a post-mortem psalmody the entranced protagonists keep reassuring themselves that the “spring break” is “forever…”

And it is, for in order to keep dreaming one has to be asleep, forever…

Forever, like the immortal Greek god of death, Thanatos, whose twin brother Hypnos, the god of sleep, is the father of Morpheus, the god of dreams.