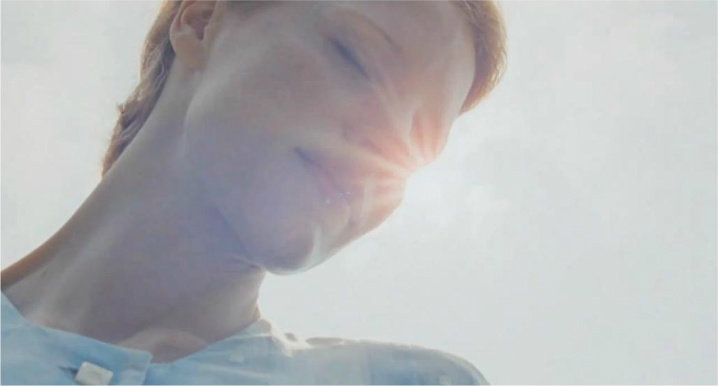 “The internet’s nailed it again!” I thought, navigating between sparse clusters of exiting couples and parties giggling carefully among themselves as if conscious that somebody authoritative might be watching.  Sure enough, Terrence Malick’s latest was remarkably reminiscent of Andrei Tarkovsky’s The Mirror, just as I’d been assured.  The motif of adulthood reminisce was sharp and present, the chronology was mixed and elusive, and—common to Tarkovsky if not so much to Malick until right that evening—the whole thing retained the subtly narcoleptic quality of attending high Mass, enough so that I now pray for a wide theatrical re-release featuring Spy Kids-style 4D scratch ’n sniff incense.

Indeed, premature as it may be, and without, as usual, the benefit of direct statements from its writer/director, I’m sorely tempted to declare The Tree of Life an attempt at creating an unabashedly religious, Christian film that seeks, in its melodrama, to divine the eternal from a rather clichéd, perhaps mythic American youth experience of a certain generation: that idealized 50s life of romping boys and barking dogs and earthy country scenes.  This is what binds the film to Malick’s other projects of late, as both The Thin Red Line and The New World presume to enter the very fabric of American mythology—the ‘good’ war of WWII and the foundation of the earliest settlements, respectively—to tear it all up and bind it back together again from its sensitive, emotive and metaphysical underpinnings.  Perhaps this is what sets Malick apart from Tarkovsky; both The Tree of Life and The Mirror sought to reveal their power through editing room questing, the latter work having enjoyed twenty or more primal variations per my copy of Sculpting in Time, yet Malick is navigating something of an artificial terrain—the construct of American Boyhood—while Tarkovsky and the writer Aleksandr Misharin smashed their personal autobiographies together to create uncanny personal vignettes, politically-minded and culturally specific yet intuitive enough to suggest the very color of life.

Malick’s work is quicker-paced, and frankly more intellectual.  His sequences are edited together often by thematic association (if not necessarily chronology), so that a scene of Brad Pitt as the story’s demanding ur-father, voicing his insecurities over the downtrodden economic state of his family, is immediately followed by a scene of the clan purchasing foodstuffs from an obviously less-advantaged black marketplace, groups of race-divided children staring at each other without commingling, followed by a scene of  Jessica Chastain as a blessed Mother doing chores on a rather comfortable lawn.  The intent of this assemblage is fairly obvious, as are swift cuts of women’s feet and legs surrounding the film’s boy protagonist, Jack O’Brien (mind the capitalization), his stirring sexuality leading him to covertly enter a neighboring woman’s unlocked home to wander around: a terrific metaphor for sexual fantasy—invasive without risking physical notice—though Malick keeps building and building his scene until the lad is pulling scanty things out of the bedroom drawers and rubbing them.  The intent, perhaps, is to recall an earlier image of his mother caressing his younger face through sheer drapes, yet such addition leaves the events heavy with increasingly blunt import, so that the inevitable casting of the stolen garment into a river seems less exploratory of a boyhood cliché than merely representative. 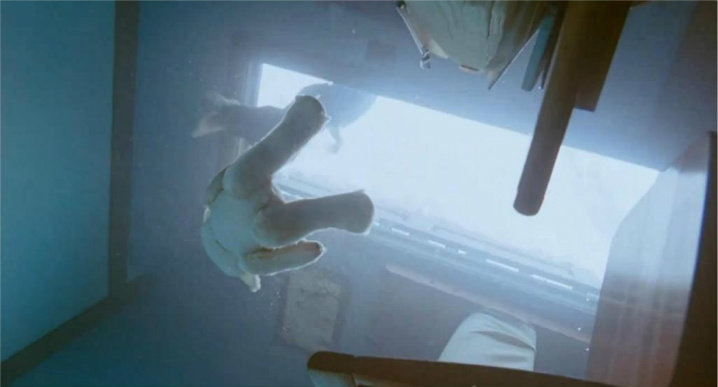 But Malick’s intellect is not purely visual; this is also something of a literary work, opening with verses from Job concerning the creation of the universe and, rhetorically, the absence of humankind therefrom, before a pulsing vulvic pleroma parting ex nihilo upon the screen births us into the director’s contained cosmos - scriptural invocation at its most direct.  Likewise, the plot (as it is), roughly tracks the Fall of Man as the growth of a boy, with American Boyhood standing in allegorical parity with the Garden of Eden, from which we can only be cast out.  Malick does not tackle events in order, however, so the film’s opening movement initially depicts the boy’s mother as a girl—all the better to suggest the eternal recurrence of these ancient ideas—and then transitions into herself at the head of a family cast out into the wilderness, grieving the death of a child, because ‘death’ is now possible away from the Edinic Tree of Life, the first humans having eaten from the Tree of Knowledge.  Further dualities are promptly established: the characteristic hushed Malick narration whispers of the Path of Nature and the Path of Grace, Father and Mother duly and irresistibly suggested as avatars of, respectively, the forceful and consumptive state of things and the compassion unique to humans through deeds.  To be perilously specific, the film seems to be working from a distinctly Catholic-tinged setup, cinematically accessing Grace through works, the very anecdotes and scenes and snatches of life that make up the stuff of his movie, just as Malick’s Original Sin is but the fallen state of humankind, a concupiscence nurtured by boys through rough play and petty violence and jealousy and resentments strewn through the narrative like infallible tropes.

Further scenes introduce us to Sean Penn as the Boy as an Adult—lighting a memorial candle which (of course!) will recur as the Boy as a Boy leaps with his eventually dead brother across Church pews in the garden of their youth—before a second primary movement depicts the origins of life itself, mainly to juxtapose some gorgeous practical effects in the service of Natural phenomena with Malick’s now-legendary CG dinosaurs, evidently ‘fake’—almost cartoonish!—but present to quietly suggest from one beastie’s failure to kill the other that the crackle of Grace is potential.  Then an asteroid swoops in to clean the slate, further working the theme of recurrence and reinforcing that, indeed, we were not there when the earth’s foundations were laid.  At times, I confess, such attempts to establish the continuity of life seem like cudgels swung to make this very ship-in-a-bottle sort of mythic interrogation resound as a bit grander than it is; while Tarkovsky seemed to effortlessly evoke living itself from his long, mysterious scenes—which I freely admit may have had an especially mysterious effect on me in that I don’t share its director’s own cultural background—Malick works and sweats.  This is most evident in the film’s slightly ridiculous Modern environment, framed so that metal architecture cages poor, grimacing Penn, who suffers what must be the most intense elevator ride in the history of human industry when not being supplanted entirely by the film’s Edenic action, its own increasing guilt and shame stretching like a long twilight between the bite of the apple and the arrival of God’s wrath, analogized to economic circumstances come crashing down. 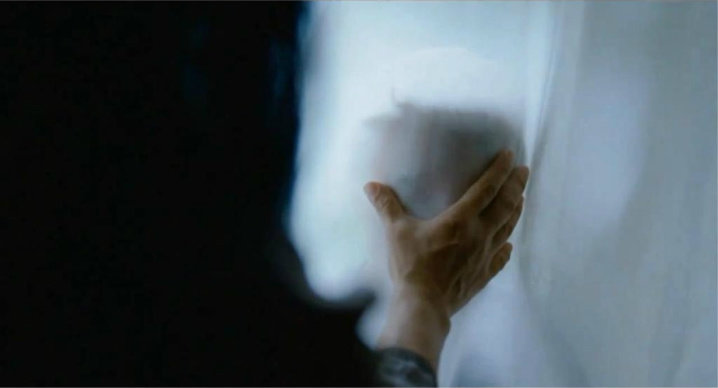 Fortunately, Malick maintains a steady hand on matters of pure cinema aesthetic.  As the boy grows from a baby to an adolescent, carpet-eyed camera viewpoints grow along with him; at one point there’s a marvelous scene of young children interacting, establishing Malick’s sensitivity with performance, while a later sequence of children running is cut together from whooshing vertical swipes, a superb directional montage.  Even the seemingly circumscribed nature of Penn’s performance is folded into a grander intent; stripped of most dialogue, he gives what’s nearly a silent movie performance, our vision lingering on his craggy face and worn hands, Malick demanding of him pantomime, which recalls the gestural acting of  Chastain as his mother, binding parent and child on a fundamental level that lays silent below the desirous angst Penn inherits from Pitt, whom he most ostensibly resembles.  This complication is good, as Malick otherwise sets up the boy’s angelic, artistic, utterly doomed brother as a consummate mother’s son, which seems facile.  Yet even as there’s a third brother lurking around, potentially lost in a longer cut, the dichotomy of Nature and Grace necessarily associates all those lovely bucolic trees and lawns as siblings to the nasty skyscrapers of the modern day: artifacts of desire, of mechanical, biological function, of unthinking movement perhaps suggested in the mother’s dances and games, perhaps then suggesting that Pitt’s father truly desires to love from his self-centered demands for kisses from his boys.

Naturally, everything comes to a head in the film’s grand finale, which one friend of mine gleefully compared to that poster where there’s two sets of footprints on the beach and then suddenly only one, and that’s where Jesus carried you (so much for avoiding kitsch in Christian art).  I’m certain that’s what left my audience tittering as they crept away from the closing credits, and it indeed aggravates the most hermetic aspects of Malick’s movie construction: all the characters gather in the sand, Sean Penn mixing in, acknowledging, forgiving, while the viewer inevitably scratches their head and goes “wait, didn’t he, like, date any other woman besides his wife?”  Didn’t he have an intellectual and emotional life as a teenager?  Does he really have no valued adult relationships?  Ah, but Malick is contrite, I think, urging compassion in making the artificial borders of his poem, his essay, as evident as possible.  Doesn’t the invocation of Job presume human limitations on comprehending the scope of the divine?  And isn’t a Tree of Life but a model of metaphysical reality, in the Kabbalistic sense?  I prefer Tarkovsky still, though Malick can and does pierce the human veil to evoke eternity in some of those final minutes, with the mother-as-a-child and Chastain-as-the-adult and the very first little girl for whom the boy ever felt some longing gather into a trinity, a lovely image of continuous humanity, as Chastain—a Marian intercessor—gives up her son, both her dead son given up to God and living sons given to become sexual beings and perhaps create life with women, just as women and mothers were created, and the orchestra swells and arms are lifted, and Terrence Malick is free for a second from his weight of footage and allegory and learned text, his fortune veritably doubled, and the chorus sings “Amen! Amen! Amen!”﻿