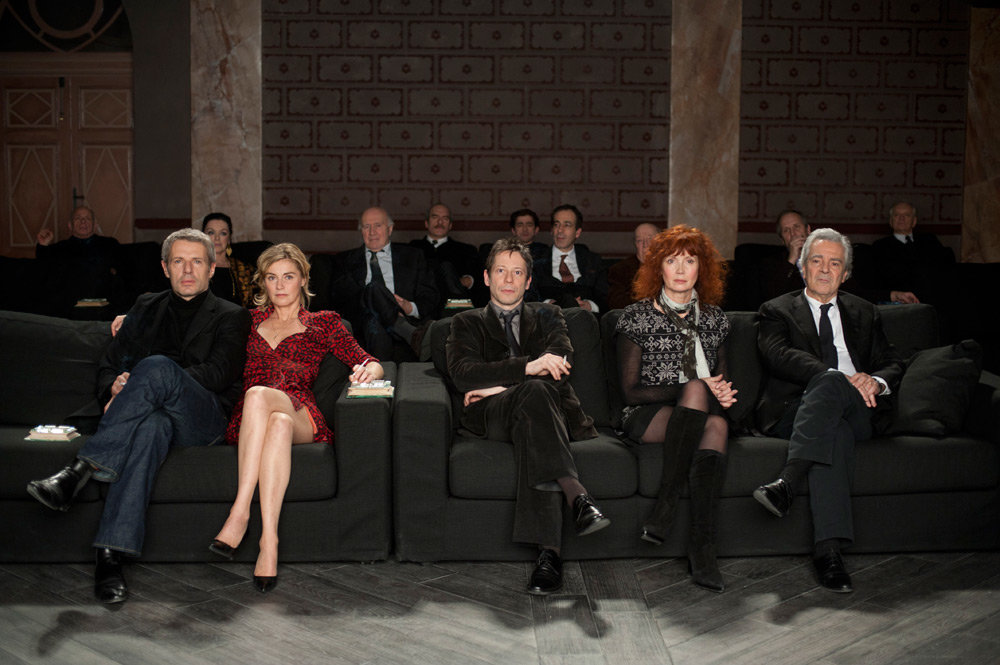 Several famous actors, including Michel Piccoli, Pierre Arditi, Lambert Wilson, and Mathieu Amalric, receive the same phone call informing them that Antoine d'Anthac, a prominent playwright who would frequently cast all of them, has passed away. Summoned to the late man's estate by his well-mannered butler, they arrive to see Antoine's videotaped last will and testament: speaking from the screen, the deceased asks his lifelong friends to evaluate a contemporary take on his play, Eurydice, adapted by a much younger company. As the projection begins, the spectators involuntarily repeat the familiar dialogue, as if it were lifted out of their shared favorite movie; so the performance begins on its own and the spacious living room suddenly turns into a small-town railway café. Orpheus starts his soft fiddle-scraping. He is about to meet Eurydice.

"The playwright's duty," Jean Anouilh, French dramatist, once wrote, "is to produce plays on a regular basis. Actors must go out onstage every night for the audiences who come to theatre to forget about death and hardship. If one of the plays is found to be a masterpiece, well, so much the better." Alain Resnais has stuck to this ethos for a couple of decades now, enriching his already stellar back catalogue with some brilliant autumnal work, but You Ain't Seen Nothin' Yet is a veritable masterpiece on par with his major accomplishments. Its audiences, however, are unlikely to forget about death, since it is based around it, as are both Jean Anouilh's plays that coalesce in Resnais' script: the immaculate Eurydice and the oft-neglected Dear Antoine; or, The Love That Failed. The latter was originally a story of a playwright who, under circumstances not dissimilar to the premise of the film, invites his friends to act out a play within a play. Here, the play in question is Anouilh's Eurydice, blithely attributed to the fictional Antoine d'Anthac.

The scene of characters arriving at Antoine's mansion bears a distinct classical Hollywood tinge: the wind is howling outside, yellow, withered leaves are strewn across the doorstep in a sublime frame worthy of Douglas Sirk. Greetings come to the guests in the form of a Rivettian intertitle: "As soon as they crossed the bridge, the ghosts did not take long to present themselves" (Et quand il eut dépassé le pont, les fantômes vinrent à sa rencontre). It is a direct quote from the French version of Murnau's Nosferatu. The score, just as gentle and nuanced, fades out before it climaxes: Resnais meant to recreate live music that often accompanied silent movies. Anouilh's Orpheus and Eurydice, incidentally, lament the fact that they did not grow up together, and therefore missed out on a chance to watch Pearl White's star vehicles side by side (specifically, Les Mystères de New York by Louis Gasnier and Le masque aux dents blanches by Edward José). Their verdict is wistful: "Now it's all gone. You can't bring it back. Cinema is painted a different color, and the heroine is old."

Resnais deliberately omits this line, as if aiming to prove it wrong. What is most captivating about You Ain't Seen Nothin' Yet ﻿is how time is regained in it; after all, it offers a vantage of a filmmaker who is just twelve years Anouilh's junior and virtually the same age as his Orpheus and Eurydice (the play was written in 1942). The fragile Eurydice ponders, "So, if you happen to have seen a lot of ugly things, they all stay with you, don't they? All the abominations you've witnessed, all the people you've hated, even those you've tried to escape, they're all there, neatly shelved?" It might be true, but it also applies to all things beautiful. At one point, Anouilh began staging his own plays, so Sabine Azéma, for instance, had an opportunity to work under his direct supervision; the rest did not, yet none of them are strangers to Anouilh's oeuvre, as they have participated in his Eurydice productions and been strongly influenced by it across the board. These things, too, remain within them. Their personal experiences with the source material are engraved into their body language and faces that Resnais frames with yet another retro device, i.e. the iris-in, which darkens the edges around them. The movie screen always responds to such enhancements, instantly adding more depth. Sometimes You Ain't Seen Nothin' Yet ﻿shifts into documentary mode, when the actors step out of their characters and become themselves and watch the next generation of thespians reenact the memories of their youth in a barely recognizable manner. New shapes replace old habits. Anouilh himself turned to an ancient myth for inspiration. A poster of Resnais' most enduring classic, Hiroshima, mon amour, is taped onto a railway station wall as a reminder of the unbreakable bond between eras and the immense span of the 20th century. Encapsulating this meticulous consistency of time is the self-explanatory "It Was a Very Good Year" Sinatra ever so tenderly croons over the closing credits. You Ain't Seen Nothin' Yet﻿, in a way, cinematizes the song's lyrics.

It features several couples of Orpheuses and Eurydices: Resnais' fixtures, Azéma and Arditi, plus Consigny and Lambert, also frequent collaborators. Each one instills their own inimitable charms: Azéma's Eurydice is ghost-like and glow-eyed, while Consigny's is vulnerable and ethereal. Let's also not forget about the young'uns from the rendition they watch: it was, actually, staged and shot by Bruno Podalydès, whose unrelated film also screened at Cannes as part of La Quinzaine des réalisateurs. Resnais intended to delegate this video production to one of his successors who would see beyond cinematic and theatrical parochialisms. In Podalydès﻿' production, the pendulum swings, transforming the harp Orpheus' father is holding into a shopping cart grate, café tables into barrels.

Once Antoine d'Anthac's living room has morphed into a set, Resnais showcases his superlative staging skills and greatly developed instinct for mise-en-scène. Take one of his saddest, most beautiful sequences: Orpheus and Eurydice are alone, in hiding at a cheap hotel, sprawled on a bed and surrounded by an empty room sans props or set decorations. The only two objects in the void are a pair of spike-heeled shoes that cling to each other just like the star-crossed lovers. Or take the grand finale, truly of the we-ain't-seen-nothin'-like-it brand and unequalled in this year's Cannes competition: Orpheus and Eurydice are locked in a convulsive embrace, not allowed to make eye contact, filmed with little to no editing. Clearly not above flashy techniques either, Resnais, on one occasion, splits the screen in half, and lets the two versions mirror one another. As Eurydice runs away from Orpheus, the halves converge to compel both Orpheuses to face the mysterious Monsieur Henri, a messenger of death or maybe Death himself. 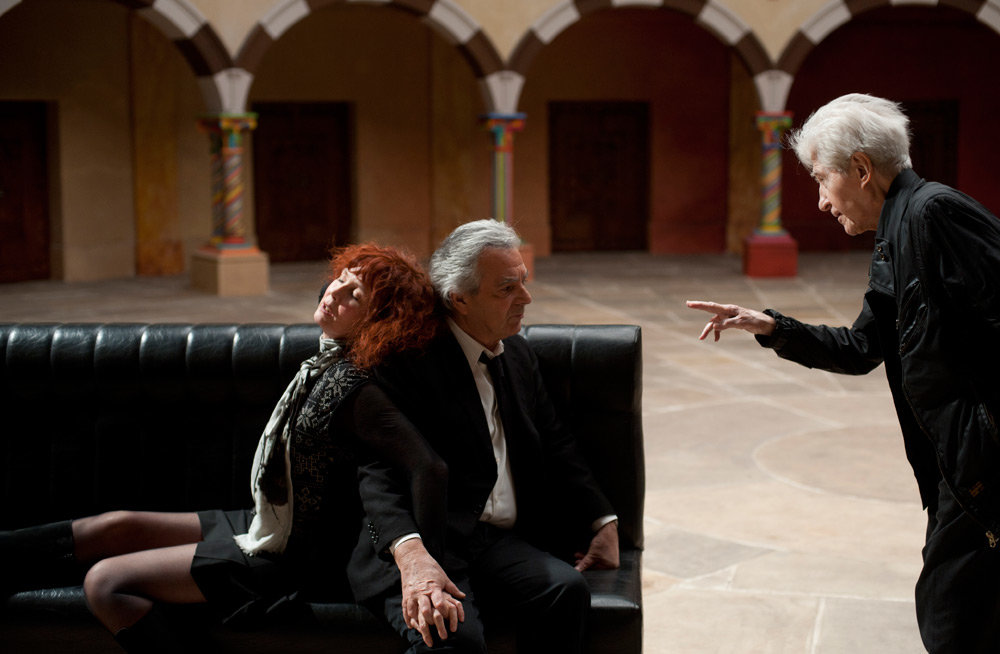 This challenging part went to Mathieu Amalric who, unpracticed in such challenges, had to reinvent himself from scratch and flee his typecasting comfort zone. He first appears against a backdrop of an eerie blue forest, mist curling all around: it is Resnais' haunting vision of Hades that brings to mind Jean Cocteau's poetic claim of mirrors being doorways to death. Looking into a mirror means watching death do what death does, as your reflection is a chronicle of minute changes you go through; it is very much like cinema, which led Jean-Luc Godard to deem it "truth 24 frames per second." His dictum stemmed from Cocteau's perspective. Later, in his Histoire(s) du cinéma, Godard would quote Jean Epstein: "Death is making us promises via cinema." (Hereby I briefly refer to the essential points of the brilliant André Habib's article La mort au travail published in French in Hors Champ.)

Eurydice contrasts the banalities of human existence with eternal love that is unattainable in life and therefore defined only by death and its final freeze-frame (or, rather, freeze-life). How is Orpheus supposed to live after Eurydice is gone? Resnais needed the other play not to conclude his film with this question but to pose another. At the Cannes press conference, he often referred to magic as his primary artistic goal. To this end, he utilizes naïve, outdated special effects like people disappearing into thin air and emerging out of it; the constant glow about their silhouettes lends a dreamlike, hypnotic quality to the images. The characters walk around as if in a state of trance, which, weirdly, makes sense since acting indeed is very much akin to sleepwalking. But once the play is over, it is time for the utmost intimacy actors can afford: they shed their roles and reclaim their selves. Just a moment ago, you were so passionate and eloquent as Orpheus, King Lear, Ranevskaya––but the magic cannot last forever. Once the limelight has fizzled, does the actor feel the way Orpheus does after Eurydice perishes?

You Ain't Seen Nothin' Yet ﻿ends on an ambiguous note. As it turns out, Antoine, still alive, has tricked his actors into coming there. Afterward, however, he drowns himself in a lake. An aspiring actress shows up at his funeral, trying not to catch the eyes of his grief-stricken friends. Who is she? A character in search of a writer, Eurydice paying respects to her creator? A starlet bidding adieu to the playwright who launched her career in theatre? Most likely, she is Antoine's ex, mentioned in passing at the beginning (note that the other play is subtitled The Love That Failed). So, Monsieur Henri was right when he told Orpheus their love would never last under life's pressures and Eurydice would have left him, had she stayed alive. In this soliloquy, Anouilh equates l'amour and la mort, the words phonetically different by a single vowel. Antoine discovers it to soon become an Orpheus as well.

In the final shot, we see yet another theatre adapting Eurydice. Resnais connects past and future by an undying human ability to believe in and genuinely ache for fiction. His flippantly self-aware framework is multilevel: we watch actors playing other actors watching a videotape of a play. And yet, no matter how many mirrors the filmmaker sets up and how stylized the imagery comes out, the moment Orpheus and Eurydice see each other for the first time, it all becomes real. What if he keeps himself from looking back? What if they, after all, escape Hades unscathed? Art is a reality in its own right. This illusion will live on long after we are gone; this myth will prevail. Boy always meets girl. Orphée est avec Eurydice, enfin!

Boris Nelepo is a film critic based in Moscow. He is Editor-in-Chief of Kinote online film journal as well as Contributing Editor to the film magazine Séance.

Thanks to Fernando Ganzo.﻿