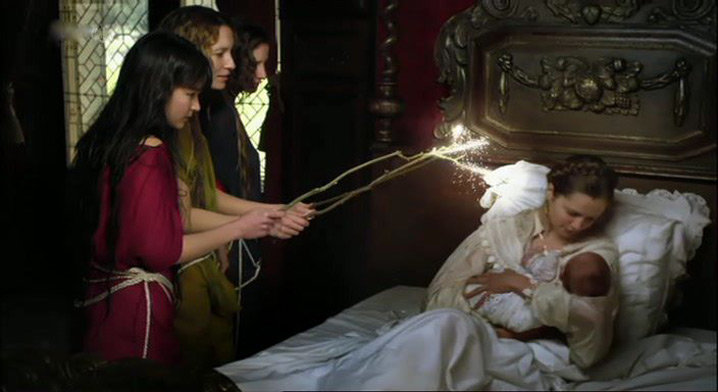 Like many other great directors, Catherine Breillat returns repeatedly to the same themes and subject matter. But her followers know that she likes to throw curveballs, and her latest, The Sleeping Beauty (La belle endormie), is one of her biggest surprises.  Breillat plans a trilogy of fairy tales, and the film that started the series, 2009's Blue Beard (Barbe Bleue), stuck reasonably close to genre, providing a good opportunity to assess her filmmaking personality against the backdrop of a traditional story. I expected the same of The Sleeping Beauty, but the game has changed radically. This time, Breillat is not content to refract the fairy tale through the prism of her temperament: instead, she uses the pretext of children's storytelling as camouflage to enable one of her most daring leaps into abstraction.

In retrospect, the first clue that Breillat is after bigger game is that, whereas Blue Beard maintains a surface of period realism for much of its length, The Sleeping Beauty begins with campy fairy-tale signifiers—cackling evil witches, magic wands that glow—to throw us off the scent. For unspecified reasons, a bad witch (Moana Ferre) ordains that newborn princess Anastasia shall die at age six from a wound by a yew spindle. Three younger, benevolent witches, introduced cavorting naked in a stream, can only modify the old witch's spell, not undo it. Quarreling comically among themselves, the good witches add codicils to the spell that carefully lay out the rules of the film for the audience: Anastasia will not die, but rather will sleep for 100 years; she will have an active dream life; and she will be sixteen years old when she wakes up. The last rule, upon which the film's artistic goals will depend utterly, is added arbitrarily by the youngest witch: when the others ask her in unison "What's the advantage?" she shrugs and says," Anyway, childhood is interminable."

(From here on out, this review is all SPOILERS.)

Having rigged the game to her advantage, Breillat almost immediately goes rogue. The willful, self-satisfied six-year old Anastasia (Carla Besnaïnou), a Breillat surrogate who is quite reminiscent of the youthful commentator Catherine in Blue Beard, keeps her appointment with destiny, but Breillat blithely ignores the suspense requirements of the genre, and jumps without warning into a free-associational web of dream images. This surrealist vein of dream evocation is rich enough that we presume that the film has revealed its artistic strategy. As it turns out, Breillat is setting us up again, using the boldness of the gesture to hide her plan in plain sight.

Just as with her opening nod to fairy-tale conventions, Breillat begins relating Anastasia's dream life in broad strokes, confronting the girl with a hideous ogre who challenges her to a life-or-death game of bowling, with skulls and bones as implements. Yet soon the young girl is wandering the banks of a river in a Rivette-like long take with natural sound. Throughout this phase of the film, Breillat moves freely between poles of realism and clearly-marked fantasy, and creates her most dreamlike effects by combining elements of each—as when Anastasia, still dressed in the pseudo-Japanese theatrical garb that she wore when she encountered the yew spindle, is taken in by a friendly family and eats a long-awaited meal, happily holding her bread and jam between fingers adorned with long false nails.

Improvising an oneiric narrative, Breillat opens up the subject of sexuality when the family's gentle son Peter (Kérian Meyan) bonds with Anastasia and becomes her first model of masculinity. For the rest of her hundred-year dream, Anastasia will search for Peter after he falls victim to the disenchantment of puberty, represented by his abduction at the hands of a beautiful but dominating Snow Queen (Romaine Portail). Whenever the film threatens to hew too closely to realistic observation, Breillat segues to a fantastic interlude, and vice versa. The plausible love-hate relationships within Anastasia's foster family are followed by a fanciful trip to a kingdom populated by dwarves and mannequins—yet, once there, Anastasia is strangely overtaken by unity of place, spending a lonely, helpless day on a public bench with nowhere to go.

Happy to emulate the violence of classic fairy tales, Breillat startles us when the driver of Anastasia's fantasy coach is hacked to death by marauding gypsies. Anastasia is taken in by the gypsy tribe, whose unruly energy Breillat adores, and the princess becomes the friend and captive of a beautiful young gypsy girl (Luna Charpentier), who woos the compliant Anastasia by holding a knife to her throat. "You can't know how I'm itching to do it—but I know that after your throat is cut, I'll regret it," says the gypsy girl, establishing the principle of feminine sexuality in Anastasia's imaginative life.

After a final adventure in snow-covered Lapland with a cantankerous old oracle who intones every line as if performing a Druid ceremony (Olga Abrego, either the greatest or the most amateurish actor in the cast—it's a fine line), Anastasia eats from a bush of possibly poisonous berries, thinking to herself that she can't die in a dream. But the berries are the death of Anastasia's childhood: Breillat cuts instantly to Anastasia's sixteen-year-old self (Julia Artamonov), covered in dust and sleeping in the mansion that belonged to her family.

The established rules of the film would indicate that Anastasia's dream is over. But she is awakened by a handsome young man named Johan (David Chausse), who claims to have had a great-grandfather named Peter. And shortly afterwards, Anastasia is visited by her gypsy friend, now grown up (Rhizlaine El Cohen), who provides Anastasia with her first adult sexual experience. Is Anastasia still sleeping?

The question will never be directly answered. But Breillat does not alter the flow of fantasy and realism, of the subjective and the objective, in any significant way after Anastasia opens her eyes. She and Johan instantly begin a shy but intense program of pre-sexual exploration, as if he were a dream figure planted for that purpose. Anastasia awakens in an old-fashioned dress, the stays of which she permits Johan to undo within strict numeric limits. And under the dress is a corset!—an implausible gesture from a narrative perspective, but one that permits Breillat a realistic demonstration of what indignities a corset wreaks upon female flesh—it's clear that the actress was made to suffer for her art.  Johan, worried that the love he feels for Anastasia will waste his youth, sneaks away to a clandestine, Bressonian life of teenage excess, which he will not share with her. (In one scene, he and a friend fondle their girlfriends while watching what first seems to be a porn video, but turns out to be Breillat's 1979 Trouble at Night [Tapage nocturne]!)

The young couple's turbulent emotions soon result in Anastasia's deflowering. In the aftermath, as the story shows signs of wrapping up, Breillat finally shows her artistic hand. Anastasia babbles happily to Johan about Peter, "my ideal since I was very young.  It's you I was looking for all through that nightmare of childhood." Though Anastasia's dream never formally ended, it has evolved over the years to the point where parts of it can be marked as the past—much like the way adult consciousness emerges from childhood. Unwilling to remain sequestered in a corner of Johan's life, Anastasia flees the mansion and vanishes briefly from the narrative—only to turn up in a black dress with bobbed hair on the streets of Paris. "You see, I went alone into your world," she says to Johan after their violent reunion. The structure of the dream has been phased out, supplanted by the discontinuous dramatic passion of young adulthood. Was there ever a dream, a spell or a princess? Did Breillat simply allocate to herself the power to construct a kind of magical-realist document of a woman's early life, in which the fantastic aspects of childhood yield gradually to the reality principle? By not answering the question, Breillat essentially answers it: when a filmmaker does not resolve a question of fact, it is because it does not matter to her.

The Sleeping Beauty's devious achievement of concealing extreme artistic ambition behind casual genre play, and thematic scope behind narrative whimsy, places it among Breillat's greatest works—possibly at the top of the pile.