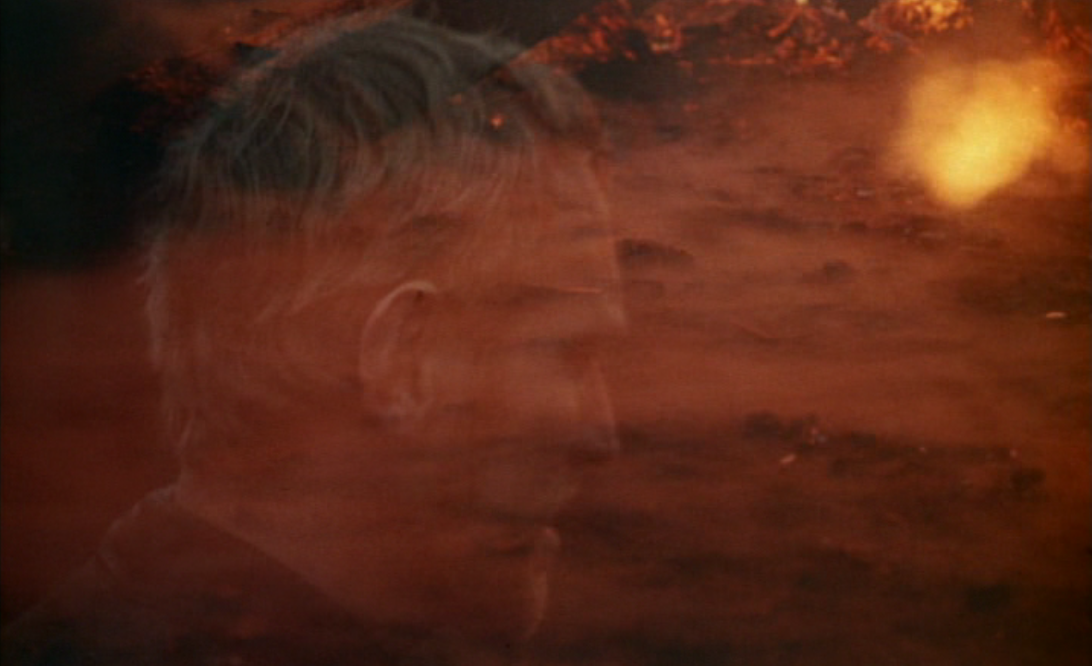 When critics discuss color in the work of Ingmar Bergman, it’s generally in relation to Cries and Whispers, the director’s brooding, confrontational 1972 film and a work that essentially demands to have its intense use of red be noticed as a Meaningful Cinematographic Element. More subtle and multilayered is Bergman and cinematographer Sven Nykvist’s earlier, selective application of red in The Passion of Anna (1969), the third, often overlooked chapter in a trilogy of films Bergman made in the late 60s (Hour of the Wolf and Shame complete the trio). The trilogy centers on turbulent relationships between Max von Sydow and Liv Ullmann on a cold, secluded island, and its primary recurring theme is the way internal tensions (sexual, artistic, moral, etc.) are materialized by encroaching, often violent, external forces. In The Passion of Anna, Andreas Winkelman’s (von Sydow) fear of human interaction and his repression of past unlawful behavior is first reflected in his interactions with mysterious, lonesome blonde women (Ullmann and Bibi Andersson) and eventually by an unseen animal-killer that’s terrorizing the island.

Insecurity, paranoia, distrust, and passion blossom out of the seams of the film, and a large part of the intrigue of The Passion of Anna is the unsettled quality of Bergman’s filmmaking, a sharp contrast to the poise and control of much of his work. Editing patterns, compositional effects, and chromatic decisions emerge with the near free-associative quality of the characters’ interactions (it’s also fitting that this is the only Bergman film to involve improvisation). If red is a bloodstream running through Cries and Whispers, here it’s a storm that rolls in and out, coming in strong for lengths of time before leaving the ground arid. And like any storm, it has its shifts in intensity; Bergman’s use of red has a mutating rather than static significance. In one particular segment towards the middle of the film, the rate at which the color alters its role in the mise en scène is staggering, marking one of the most dynamic stylistic flourishes in Bergman’s entire body of work. 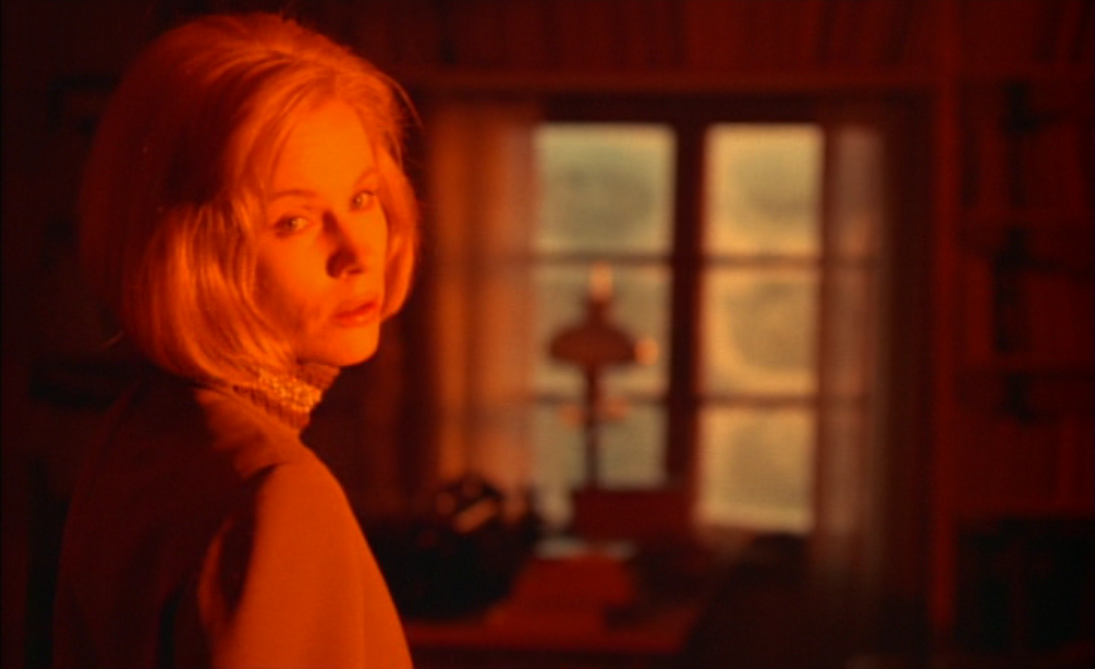 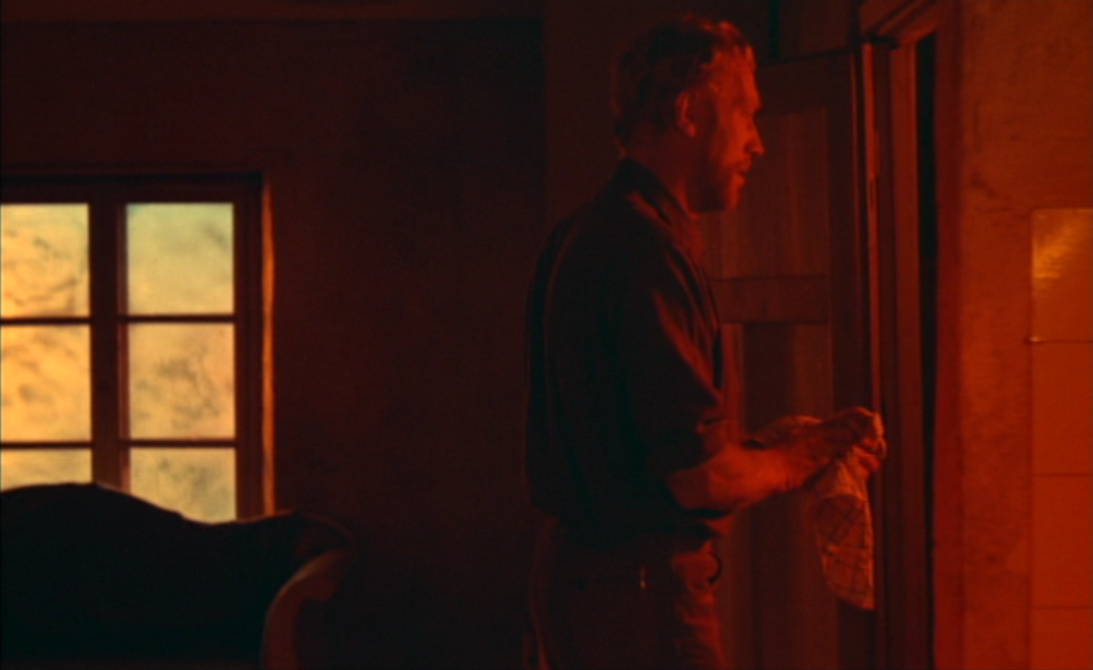 ﻿Pleasure is only fleeting though. Red dissipates briefly before returning in a jarring cut to maimed sheep lying in the snow the following morning, their blood saturated to an almost Godardian extreme against the surrounding whiteness. (Speaking of Godard, his “it’s not blood, it’s red” is not the case here; Bergman’s blood is both Red and undeniably Blood.) Suddenly, a seismic shift has occurred in the representation of red from a thing of eroticism to a thing of violence. Unlike the warm surface glow of the previous scene, the red is emerging from a physical source in the frame, but it’s no less abstract; juxtaposed against this prior scene of sensuality, the blood suggests the immediate metaphorical aftermath of Andreas’ attempts at intimacy with a married woman, a reflection of the moral implications of the tryst. 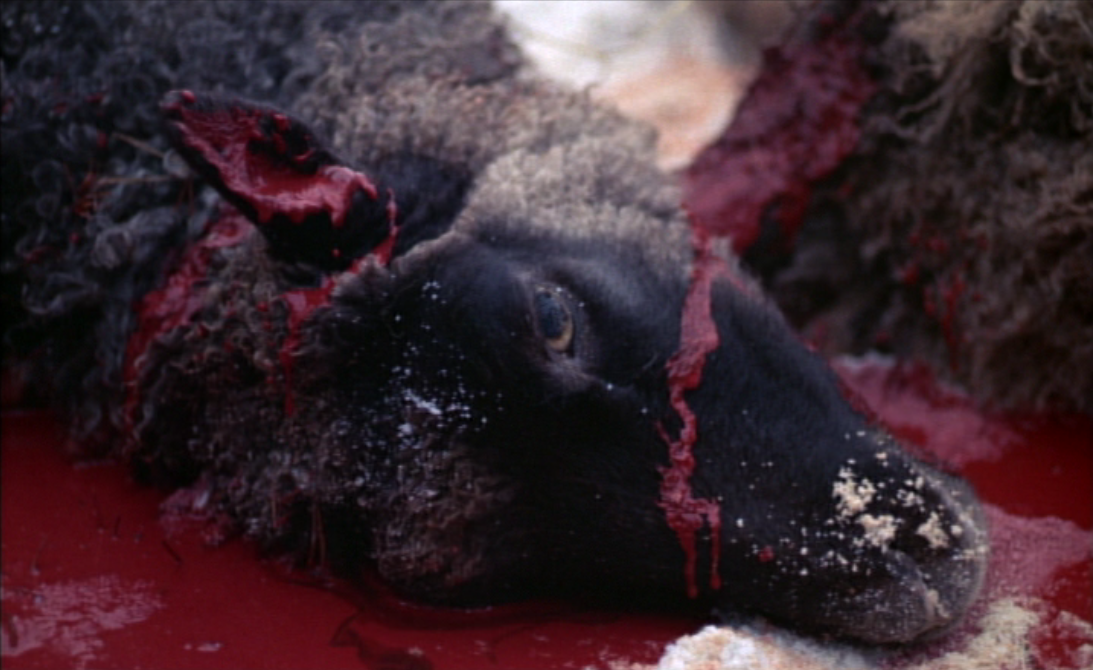 ﻿To trace the moral repercussions back to a concrete threat, Bergman presents a bold, assertive match cut from the bloody sheep to Elis Vergerus. Beginning with a sweeping pan as a man tosses a sheep carcass into a hole in the ground, his motion is then completed by Elis, who pivots in his photo studio and pulls his camera up to his eye. Both are tight close-ups, and when cut in mid-motion, the actions seem to fuse into one. 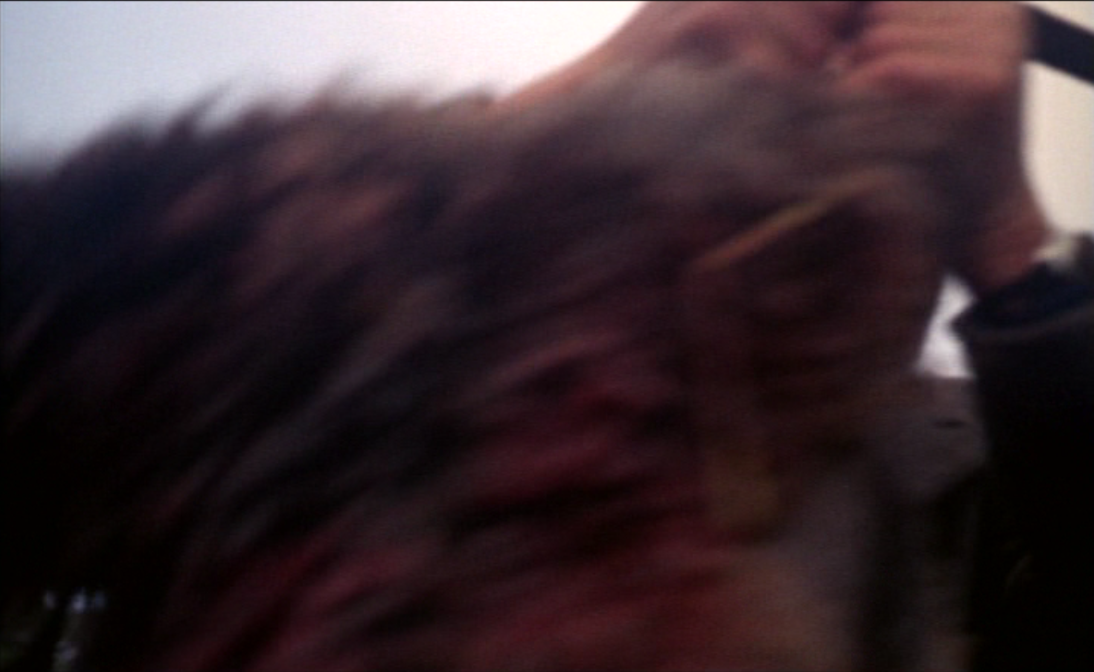 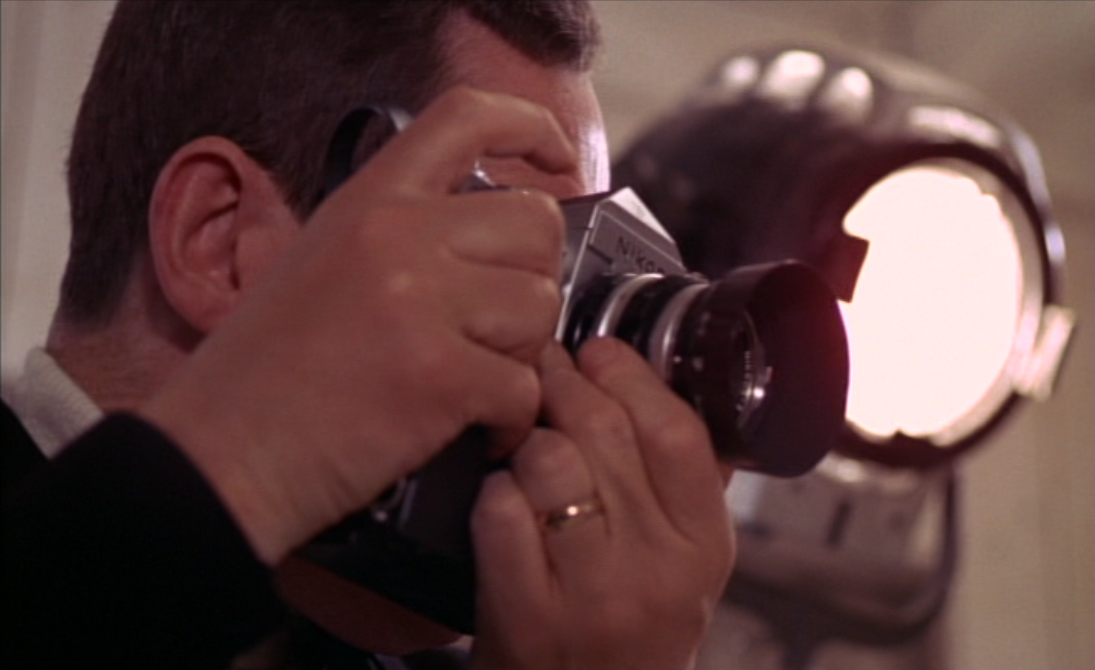 Elis’ photo studio is essentially a repository of past trauma: images of sad, tortured, or diseased people (extensions of Bergman’s concern at the time with issues of collective guilt brought upon by the Vietnam War). It’s not exactly a place for a man defined by his refusal to acknowledge and confront the past, but nonetheless it’s where Andreas routinely meets up with Elis. Josephson, a master at projecting a sense of snarky omniscience, exudes an awareness of Andreas’ existential issues and potentially even his involvement with Eva, and appears to delight in subliminally calling him out on it. At one point during the scene, Elis holds up a print of Eva and it momentarily covers his face. It’s as if he’s taunting Andreas by donning a mask of his wife. 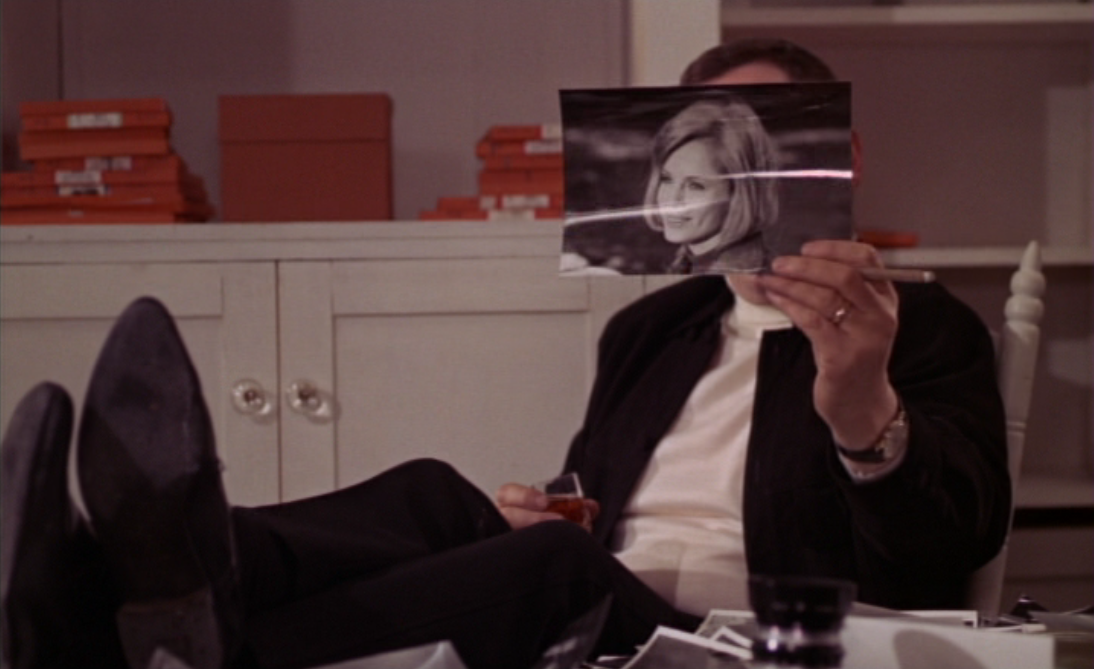 But even more so than Elis’ condescending behavior, it’s the mise en scène itself that exploits Andreas’ demons. The color scheme of the studio is entirely monochrome with the exception of the blood red photo boxes sitting behind Elis, which draw the eye continually to the background of the frame. Eva, decked out in a bright red jacket, soon enters the scene as well, and an immediate visual link is established between her and the boxes. Suddenly all of the red in the room is a direct extension of Andreas’ frustrations and insecurities in the past few scenes. Packed with its multiple implications—dangerous eroticism, grotesque violence, fear, betrayal, guilt, even the exploitative relationship between a camera and its subject—it dominates the scene, throbbing toward both Andreas and the viewer. It’s a display of organic, intuitive aesthetics, an example of how the resources of cinema can be free and malleable rather than pinned to a single expression.﻿ 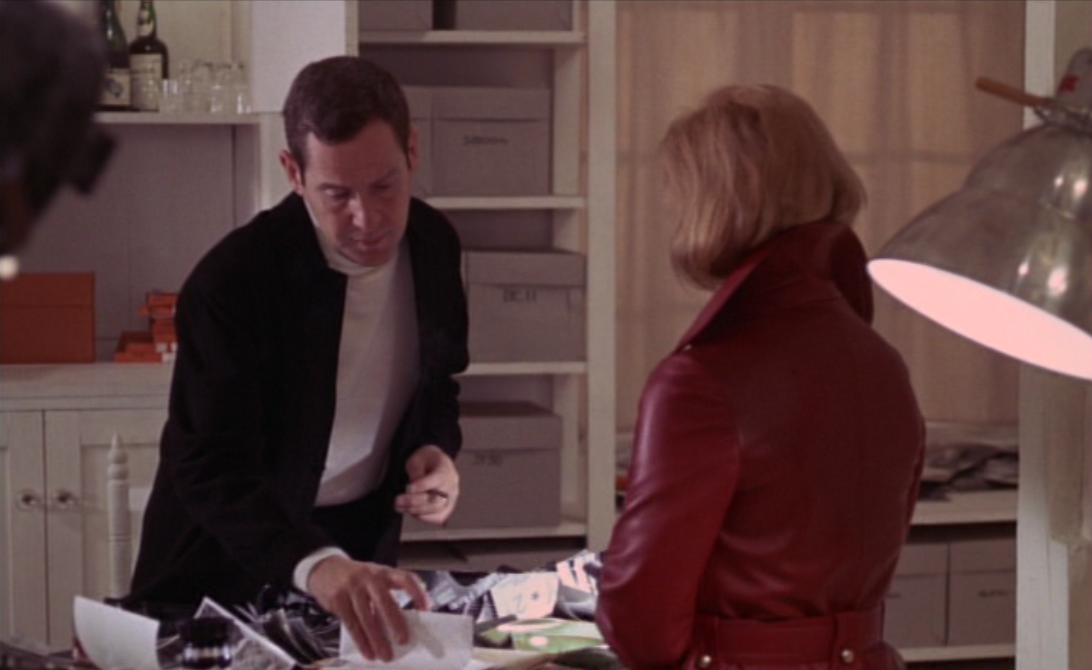 The Details is a column that catches the small within the big, focusing on the individual elements that make cinema so expressive.