The opening thirty minutes of Robert Zemeckis’s Flight (2012) represents some of the most exhilarating studio filmmaking of recent years. When the movie begins, certain parameters have been suggested for the film: the poster comes bearing a reassuring subtitle (“from the Academy Award-winning director of Forrest Gump and Cast Away”); the trailer remains curiously elusive, but still proposes some sort of redemptive hero’s journey; and the 100th-anniversary Paramount logo, when combined with Alan Silvestri’s somber piano score, seems to promise an almost unrivaled level of year-end, November-release prestige. What Zemeckis gives us in the film’s first scene is mischievously, immeasurably different: a 7 a.m. cigarette, a swig of stale beer, a joint, a stark-naked Nadine Velazquez, a bitter phone call between a drowsy alcoholic and his off-screen ex-wife, and a line of cocaine (captured in a wicked, formidable Steadicam thrust).

The enormous gulf of difference between what we generically expect from a mainstream Oscar-season release and what Flight actually offers accounts for much of the film’s initial blast of energy. To the credit of Zemeckis, screenwriter John Gatins, and lead actor Denzel Washington, there’s also a convincing trace of dark comedy—Whip, to his ex-wife, while ogling Velazquez’s rear-end: “I've been up since the crack of dawn”; Whip offering a “hit” of oxygen to nervous, straight-arrow co-pilot Brian Geraghty; John Goodman’s every scene—that, especially at the outset, seems awfully provocative considering the high-stakes conflict of the first-act material (airborne turbulence that could very easily lead to the death of over a hundred people). That we’re compelled to laugh (or, at the very least, smile) at Washington’s Whip Whitaker as he covertly pours himself a screwdriver while talking to his passengers about college-football scores is an immediate sign that the movie is doing something exciting and morally thorny. Moreover, that Whip’s precise alcoholic/coked-up tendencies are arguably the catalyst for him saving the lives of most of the people on-board pushes Flight even further into the realm of the daring high-concept character study.

Because of the unusual, surprising structure of Gatins’s screenplay, most of the negative (or even mildly, respectfully positive) reviews that Flight received upon its initial release cited a kind of come-down effect—to paraphrase, the quality of the opening act, culminating in the expert Zemeckis craft of the extended plane-crash sequence, set a lofty bar that the ensuing drama of addiction couldn’t match. (I suppose the implication here is that the recovering-alcoholic storyline comprises more familiar dramatic turf—in which case, please direct me to other addiction-oriented character studies in which John Goodman provides the protagonist with emergency coke right before a courtroom climax of moral reckoning.) Perhaps the most disappointing implied notion of such a critical consensus is that Zemeckis somehow stopped directing the movie after accomplishing the technical feat of staging the plane crash. Rather, the truth of the matter is that Zemeckis’s handling of Flight’s second and third acts is every bit the equal of the opener—his framing is so meticulous and psychologically revealing that the movie’s lawyerly arguments, lengthy conversations, and prolonged drinking sessions have no trouble measuring up to the cinematic stimulation of the crash sequence. 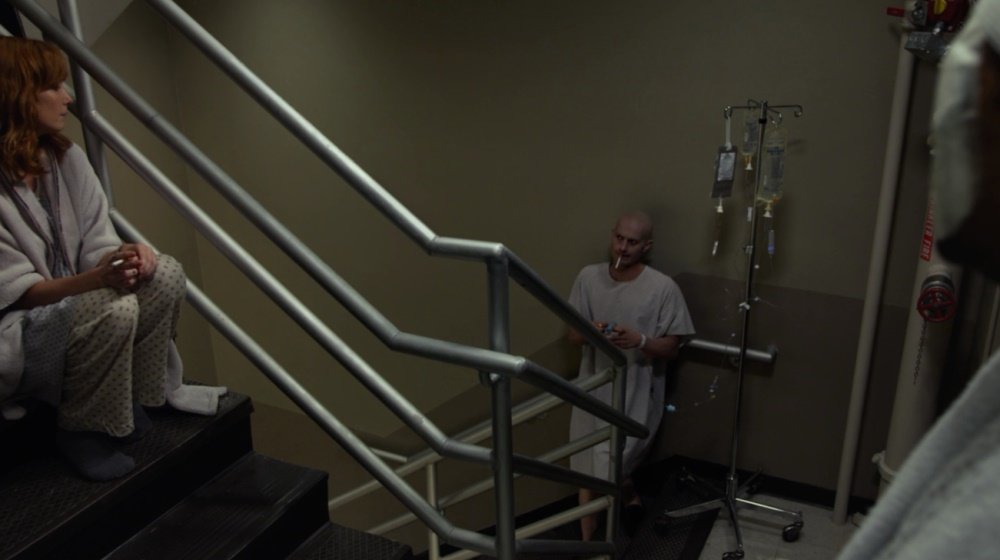 At the center of Flight’s visual scheme is the triangular composition: an image of Whip stuck in the same frame with two other people, cornered by them. Occasionally, the triangular framing can produce a serene, almost spiritual timbre, as in the hospital-stairwell dialogue scene between Whip, heroin-addict Nicole (Kelly Reilly), and James Badge Dale’s cancer patient (credited as Gaunt Young Man). The beauty of this scene—the tranquil quiet, Dale’s refreshingly direct philosophizing, the cigarette smoke that cuts through the air (Vadim Rizov calls Flight “one of the nicotine-heaviest mainstream films in recent memory”)—signifies one of the few moments in the film in which the three-pronged image is a release for Whip. This isn’t the real world of hospital rooms, doctor’s orders, NTSB officials, and news broadcasts—this is, for all three of them, an escape. 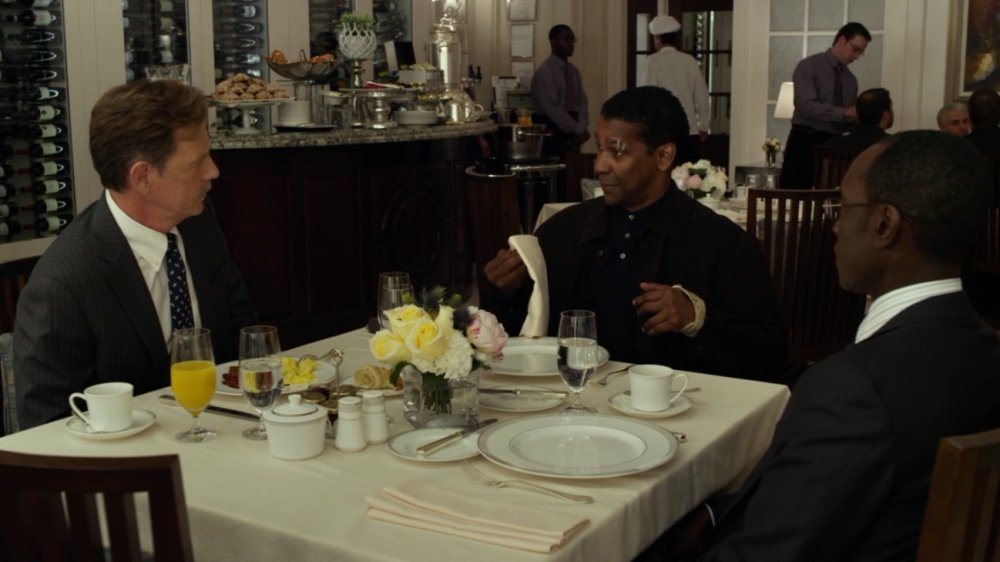 Elsewhere in the film, the triangular composition is a source of conflict and unrelenting stress for Whip: most of the people he talks to during the film, while perhaps nice, cordial, helpful, and well-meaning, nevertheless want something from him, whether it be information, a confession, a promise of sobriety, or an agreement of legal cooperation. Some of the best, most tense instances of drama in the film are the verbal sparring matches between Whip, his old Navy pal Charlie Anderson (Bruce Greenwood), now a representative for the airline’s pilot union, and Hugh Lang (Don Cheadle), a lawyer from Chicago who has been called in to defend Whip against potential criminal charges. In fact, it’s their initial meeting together over breakfast—in which Hugh first informs a bandaged Whip of the incriminating results of his post-crash blood test—that finally drives Whip back to the bottle. 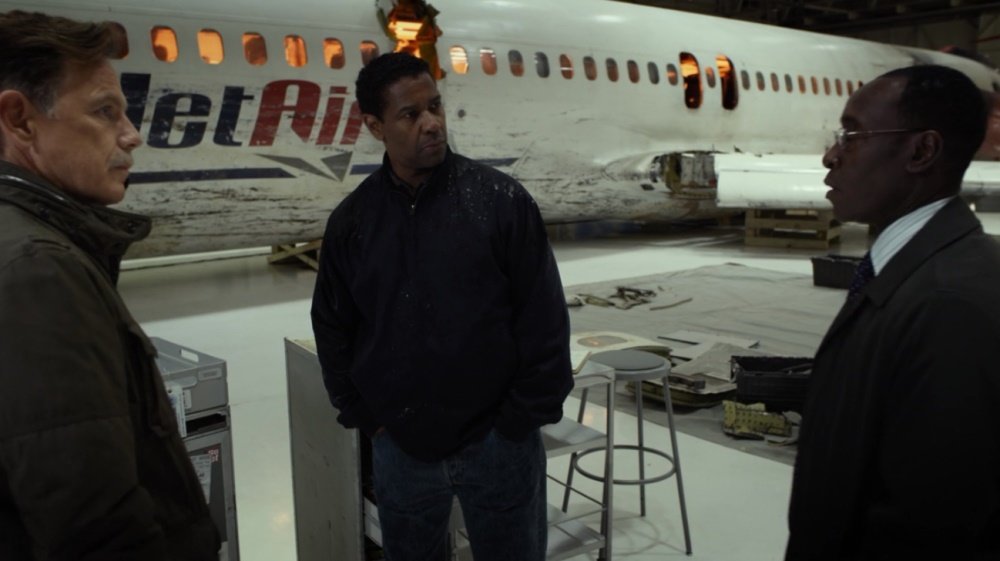 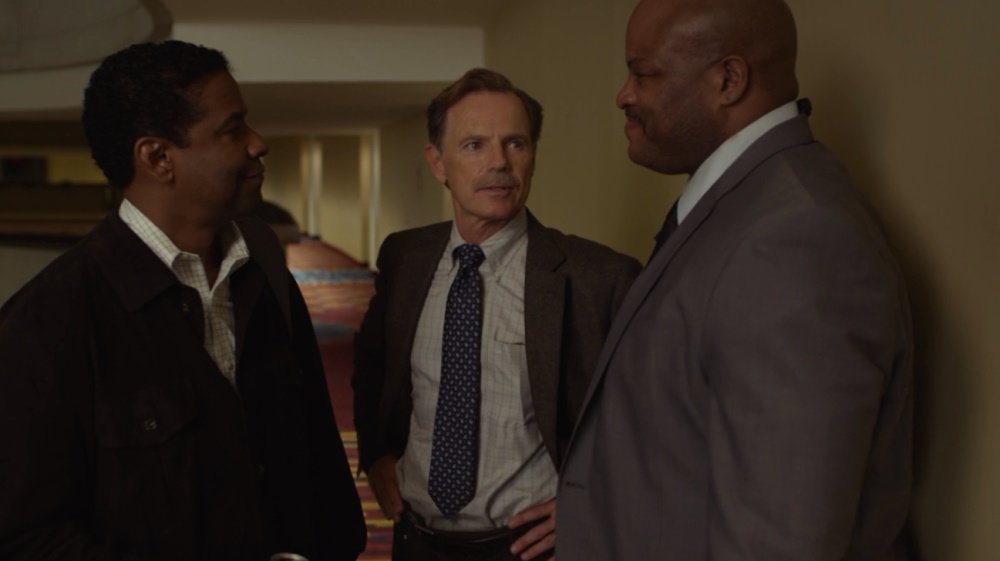 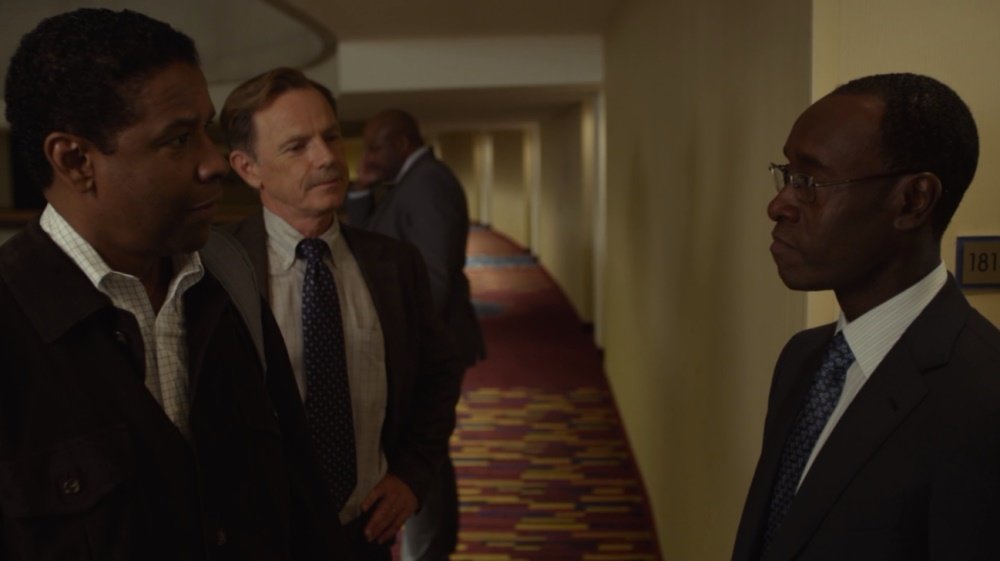 Later, Zemeckis plunks a drunk Whip in-between Charlie and Hugh, the smashed aircraft sitting behind them, hovering over the conversation. Hugh mentions the discarded liquor bottles that were found in the garbage from the flight—liquor bottles to which only the staff of the plane could’ve had access. Again, Whip is being shoved into a corner, prodded and questioned until he has to relent and admit to yet another transgression. A few scenes later, the night before the court hearing, Charlie is guiding Whip to his hotel room, and Zemeckis employs an unbroken shot that ingeniously connects two triangular dynamics. In the first, Charlie introduces Whip to Officer Edmonds (Michael Beasley), the watchdog/bodyguard who has been hired to monitor Whip’s pre-trial behavior; in the second, without cutting, Zemeckis moves the frame to introduce Hugh, who has been standing a few paces down the hall. As Edmonds retreats to the extreme background of the image, Hugh’s appearance resembles nothing so much as a new obstacle in a long line of them—another lawyer/representative/bureaucrat waiting to tell Whip how to behave, how to think, how to eat, how to drink. 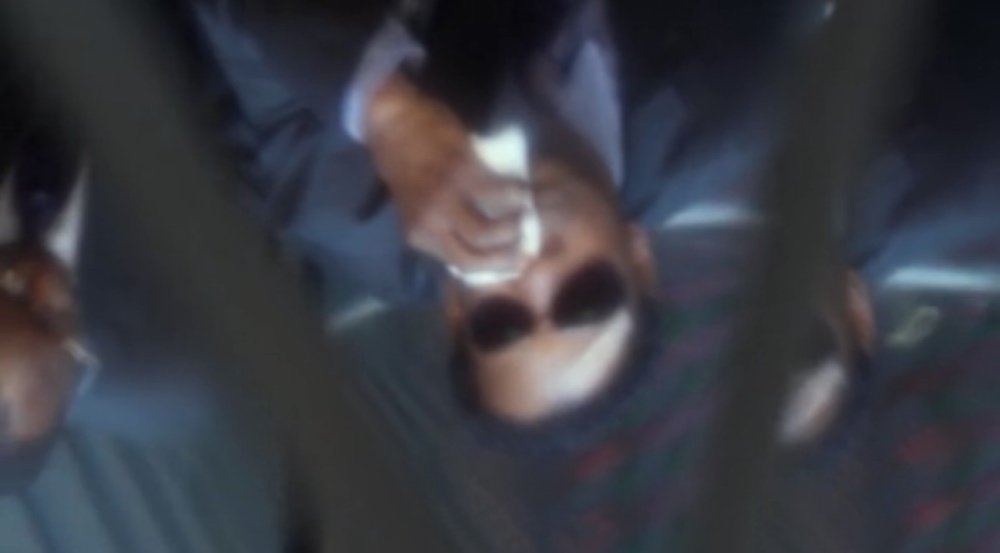 The entire pulse of the triangular technique changes on the morning of the hearing. In the above image, Whip—having just received a dose of pick-me-up cocaine from Harling Mays (Goodman) and consumed it in the company of Charlie and Hugh—is wiping a dollop of blood from his nose in the hotel elevator. Just prior to this shot, we have seen Whip exiting his hotel room, fresh, shaven, well-dressed, donning the shades—an image of feeling-good swagger that recalls the first time we saw Whip in his pilot’s uniform, exiting the room he shared with Velazquez in the opening scene. But the elevator image foreshadows a weakening of Whip’s confident façade. When he looks up and sees his reflection staring back at him, he couldn’t possibly like what he sees: the bandage on his forehead, the protective sunglasses, his bloody nose (all of which, it might be mentioned, is being observed by a little girl off-screen). The true resonance of the image, however, is the subtle inversion of Zemeckis’s triangular technique: though Hugh is featured on the left side of the frame, the figure peeking into the image on the right side is none other than Whip himself. It’s the first time that Zemeckis, by hinting at Whip’s reflection near the edge of the frame, has directly incorporated Whip’s interior reckoning into the film’s visual pattern. Instead of arguing with other people, Whip’s finally starting to contend with himself—a shift that’s signified by the newfound ubiquity of Whip in the triangular image. 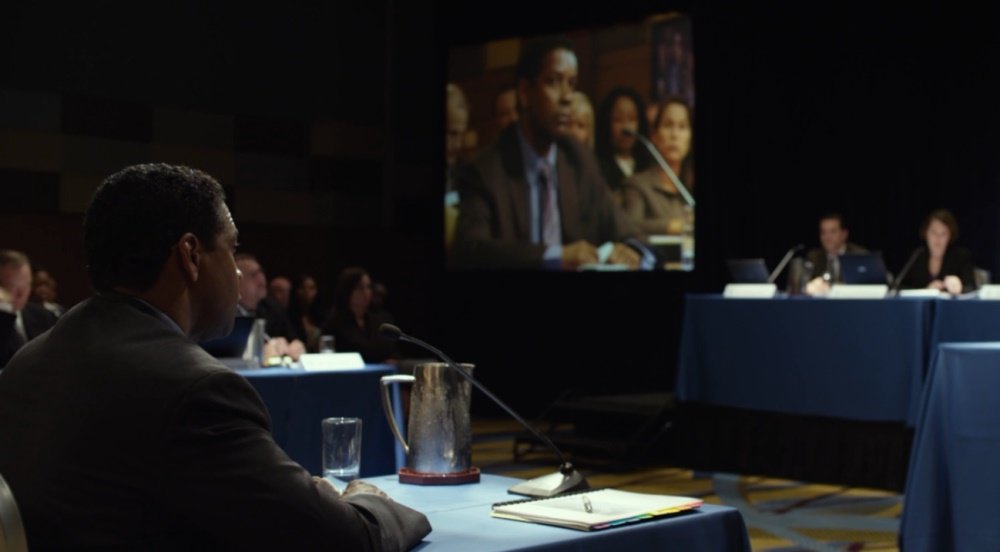 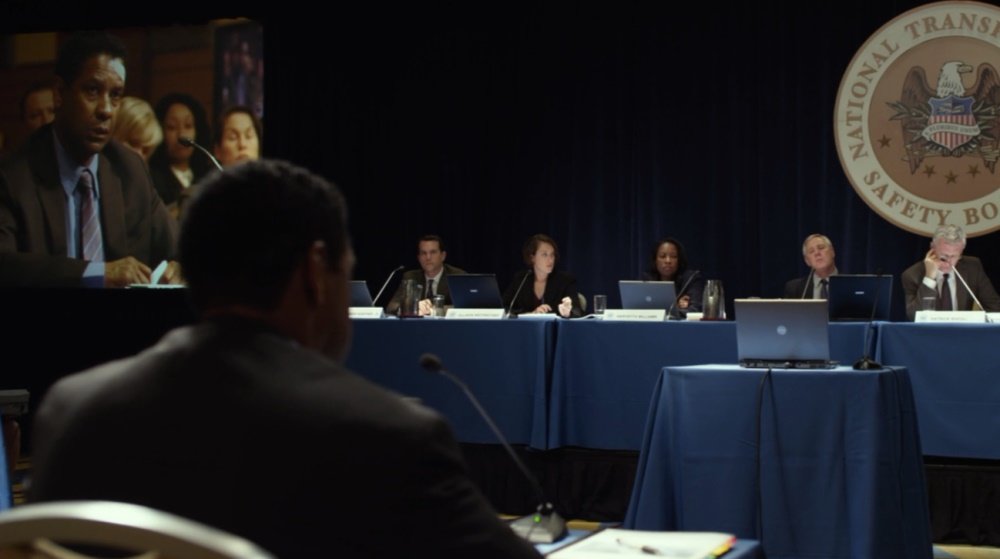 Naturally, Zemeckis saves the culmination of the triangular technique for the film’s climactic courtroom sequence, which has Whip seated before a panel of safety officials, his image projected on the screens at the front of the room so that all behind him can see his nicked forehead, his sweat, his nervous breathing, his hesitations. The point, however, is that Whip is fighting with his own image. Off-screen, Charlie and Hugh are watching, having trained Whip to preserve and cultivate that image at all costs. But a breaking point has been reached. The clear irony of this sequence is that, in the most public of places, Whip is at last confronting the most personal issues imaginable; so pronounced is the weight of the character’s individual reckoning that the person he’s talking to, lead investigator Ellen Block (Melissa Leo), isn’t even seen on-screen in the two images above. Though the other members of the board tacitly embody the third focal point of the triangular image, the real essence of the composition (as in the shot in the elevator) lies in the act of Whip looking at himself and considering his own moral character.

An organic result of Zemeckis’s visual strategy in Flight is the consistent use of medium-long-shot compositions. Particularly in the scenes between Washington, Cheadle, and Greenwood—as well as those featuring Goodman—Zemeckis and DP Don Burgess keep their camera at a comfortable, pleasurable distance, filming their actors from the shins up. Look at the way Washington fidgets with his napkin during the Cheadle-Greenwood breakfast encounter, or the way he shoves his hands into his pockets in the later scene with those two guys in front of the shredded aircraft. This is one of the reasons why this performance by Washington is among the actor’s finest and most complete: rather than just relying on Washington’s thundering voice and facial poise, Zemeckis lets him speak with his body, his arms, his legs (after the crash, Whip is given a cane), his hands. On his blog, David Bordwell has complained about the lack of sustained two-shots in contemporary cinema, and though Flight’s compositional motif may add a third figure to that dynamic, the effect is still admirably the same: actors being given the opportunity to work through a frame physically as much as emotionally or psychologically.﻿

Part of our on-going series The Details, a column that catches the small within the big, focusing on the individual elements that make cinema so expressive.