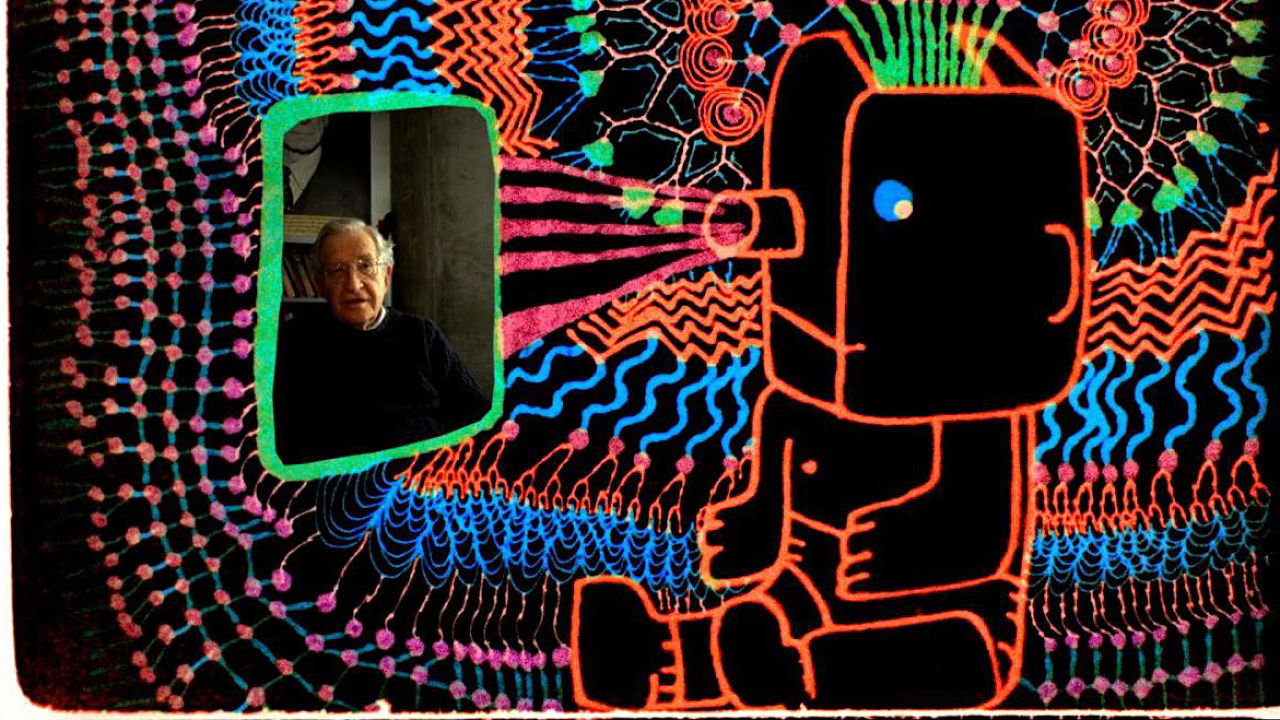 Michel Gondry's documentary Is the Man Who is Tall Happy? billed as "An Animated Conversation," is playing at Edinburgh International Film Festival, and "playing" is a particularly apt word for what the movie does. Gondry uses an interview with philosopher Noam Chomsky, only part of which was captured on film (via an ancient Bolex camera), the rest as audio, and constructs "an animated conversation" using hand-drawn images which illustrate, elucidate, question and bounce off of the questions under discussion. In broad terms, if you know both men's work you can probably judge whether you're likely to enjoy it. I did.

I spoke to Gondry by phone, with an ancient tape recorder scotch taped to the receiver, thinking this jury-rigged approach might be in keeping with the film's lo-fi approach.

NOTEBOOK: How did you meet Chomsky?

MICHEL GONDRY: I was visiting MIT—the Massachusetts Institute of Technology. I’ve been invited to be artist in residence for several years. Then I realized he was teaching there and I asked if I could meet with him. And so we met on several occasions, we had conversations… And I had this project for maybe ten years, to do an animated documentary on a scientific subject. And then I realized I should do it on him, so I asked him and he said "yes" right away.

NOTEBOOK: What was it about Chomsky’s work or personality that drew you to him?

GONDRY: He’s an amazing scientist, he revolutionized linguistics in the fifties by bringing the field into biology when it was more like a literature subject. And of course he’s an amazing activist and has an immense knowledge of politics and world affairs. I don’t know many people on this planet who are competent and exceptional on both scientific and political subjects. Often scientists are very vague on political opinion, and politicians have contempt and zero interest in science. It’s quite amazing to meet someone who is equally a genius in both fields.

NOTEBOOK: It must make it difficult to decide which aspects of Chomsky to focus on. How did you select?

GONDRY: Well, I had the ambition to take a scientific subject to make an animated film. His activism and political work is exposed a lot, through the net and the papers and his books, of course, and his scientific work, which is equally important, is much harder to access. His books are very technical and there’s much less discussion about them. There have been five or six movies done on his activism, so I thought I could focus on this. In Europe and especially in France, he’s been ignored both as an activist and scientist because he criticised a lot of the French media...so that was one reason I wanted to focus on the scientific aspect of his work.

NOTEBOOK: At the start of the film you explain your reasons for using animation (partly to expose the artifice of filmmaking). Are you really troubled by the way films pretend to be real?

GONDRY: At the time of starting the film, I had seen a few documentaries that were really reorganized to be dramatized, and I felt that when it’s been said it’s a documentary, the audience has a perception, a vulnerability, they absorb everything as something that is true, like your parents would tell to a child, or your teacher will teach you. I think sometimes this could just be abused by the way things are organized to present surprise, and keep the big reveal at the end, to make it more dramatic and more commercial. And I felt that at least animation was not pretending to be real, because it was the point of view of the person who was doing the drawing and animation. This isn’t to say that all documentaries which are not animated—which is most of them—are dishonest. There are those, like the Maysles brothers in the US, or Raymond Depardon in France, who are extremely honest and ethical. It takes a deep honesty to do that. Some other filmmakers who do documentary use manipulation to dramatize the work and I was against that, especially when I started this project.

NOTEBOOK: One of the things that’s charming in the film is the way that you admit mistakes and things that haven’t worked and so I think the audience gets a sense that they can trust you because you’re prepared to admit when things haven’t gone to plan.

GONDRY: Of course there is the problem of different tongues with Noam, but I think it helped me with my lack of knowledge of the subject: I have an excuse in a way because I don’t speak the English language very well. And when I have a conversation with somebody, I really dislike having to pretend to understand when I’m lost. I prefer to stop the flow of the conversation and ask for this word or that word to be explained to me—

At this point the flow of the conversation was interrupted when my phone went dead. I plugged it in and called back.

NOTEBOOK: I wanted to ask how you worked with the rest of your animation team.

GONDRY: Well, to be honest, there’s not really an animation team. I mean, I have two animators helping me at the end, most of the drawing and animation I did myself. That’s why it looks a bit clumsy at times, but I really wanted to do a personal project. I had no production to start with, of course I used Partizan Productions to finish the film, but most of the film I did on my own. I didn’t want to ask for money or explain what I wanted to do, I just wanted complete freedom to do it.

GONDRY: Yes, but especially in this case it’s not necessarily my taste, it’s more by necessity. Because I don’t know how to work the computer to make animation, and the Bolex, the mechanical camera I used, I had this for 25 years and I know exactly how it works and it never failed me. So it’s just the most natural way for me to express myself. Of course it looks old-fashioned now, because it’s a camera that was made maybe fifty years ago, but it still works as well now. It’s not being nostalgic… Let’s say you want to do a billboard. And instead of taking a picture into Photoshop to compose it, you take a brush and painting and you make it like that. It’s a different way of expression, it doesn’t necessarily mean it’s from nostalgia.

NOTEBOOK: It must have been refreshing to work this way when you were also making a Hollywood movie.

GONDRY: Yes, completely. When I was editing The Green Hornet it was very stressful and frustrating at times, and I would go home, put my pajamas on, and my cameras and lightbox and paper was all ready in my room, and it would be like holidays. Sometimes I would play Noam’s voice when I was drawing, or I could play a book on tape, and that was really great. I played a lot of Russian novels. To me it was exactly like playing a video game is for other people. I have the same excitement. Also, when I finished playing, I had something which had been built.

NOTEBOOK: There’s a subplot in the film about you trying to finish the film in time for Chomsky to see it. Has he seen the film now, and what did he think?

GONDRY: Yes, he has seen the film many times and he really likes it. It really made me happy because he never goes to a movie theatre, I think he went three or four times to see this movie. I made him sit next to me. It really made me happy that he liked it. I think it was my work, my interpretation of his thinking, so he feels he’s watching my work. He never watches documentaries about him because he doesn’t care to see himself.

David NOTEBOOK is an Edinburgh critic and filmmaker. He blogs at Shadowplay.