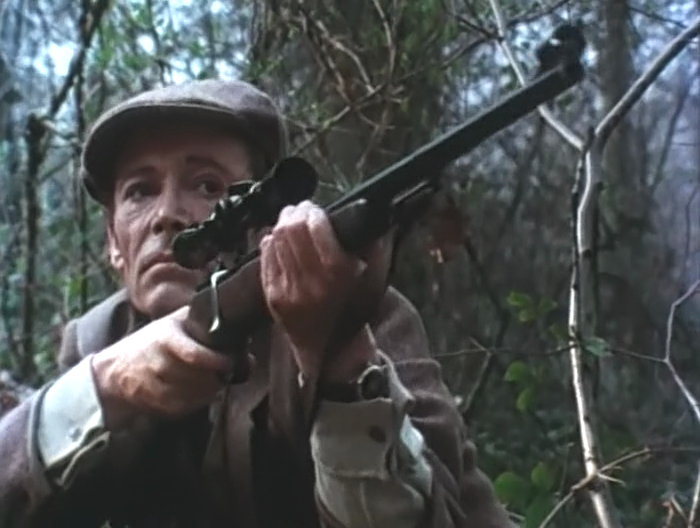 It took me a while to watch something in tribute to the late Peter O'Toole—too upsetting—and I still haven't been able to face Joan Fontaine on the screen since her recent passing, though when I do perhaps I'll go for September Affair (1950) or Something to Live For (1952), neither of which I've ever seen.

With O'Toole, I eventually plumped for Rogue Male (1977): the title seemed to fit him to a tee. This is a television adaptation of Geoffrey Household's excellent thriller, previously filmed by Fritz Lang under the title Man Hunt, back in 1941 when the events were current. 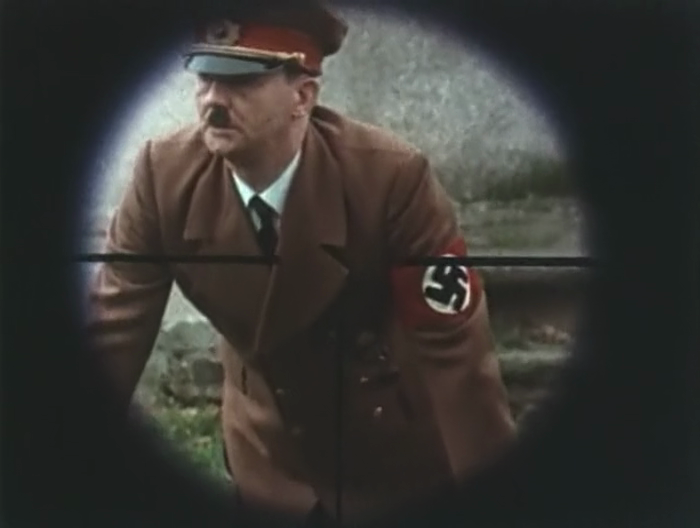 A hunter (O'Toole) called Hunter takes aim at Hitler, but is apprehended before he can pull the trigger. Tortured by the Gestapo, he miraculously escapes and now Hunter becomes the hunted, pursued all the way back to England and run to earth in a self-made burrow, trapped like a rat.

Lang had urgency and the need for propaganda on his side, as well as the great Dudley Nichols and Lamar Trotti on script duty, Walter Pidgeon as hero, Joan Bennett as leading lady and George Sanders, best of all, as his smarmy baddie. The remake is in the hands of Clive Donner, whose output was colossally, unbelievably uneven, but who was quite capable of decent work with decent material. If you gave him The Caretaker, you got a Pinter adaptation, whereas if you gave him Here We Go Around the Mulberry Bush or What's New Pussycat? you probably got what you deserved.

Donner has O'Toole, at the peak of condition, and a fine supporting cast including Alastair Sim and Harold Pinter (above), as well as a script by Frederic Raphael, later screenwriter of Eyes Wide Shut: Raphael doesn't make the changes Hollywood insisted on for cinematic effect, and is faithful to the book's structure and its chilling violence in a way Lang couldn't have been. So the result is both more literary and, oddly, more visceral. And poignant. Here's why.

At Peter O'Toole's full-on Irish wake , he lay in an open casket so as best to enjoy the occasion, and his cat, Sydney, came and sat on his chest for the whole evening. In the following scene from Rogue Male, the roles are reversed, as O'Toole mourns a feral cat he has befriended and named Asmodeus. The cat has fallen victim to John Standing's Nazi stooge (less amusing, and thus even more hateful, than the George Sanders original) and its demise will motivate O'Toole in his final surge to victory. The lines of poetry he speaks are from Byron, already quoted earlier in the show.

O'Toole, that most feline of actors, has excited visual comment from his directors with his catlike qualities from the first:

She Walks in Beauty

She walks in beauty, like the night
Of cloudless climes and starry skies;
And all that's best of dark and bright
Meet in her aspect and her eyes:
Thus mellow'd to that tender light
Which heaven to gaudy day denies.

One shade the more, one ray the less,
Had half impaired the nameless grace
Which waves in every raven tress,
Or softly lightens o'er her face;
Where thoughts serenely sweet express
How pure, how dear their dwelling-place.

And on that cheek, and o'er that brow,
So soft, so calm, yet eloquent,
The smiles that win, the tints that glow,
But tell of days in goodness spent,
A mind at peace with all below,
A heart whose love is innocent!﻿﻿

The Forgotten is a fortnightly column by David Cairns, author of Shadowplay.﻿﻿ ﻿