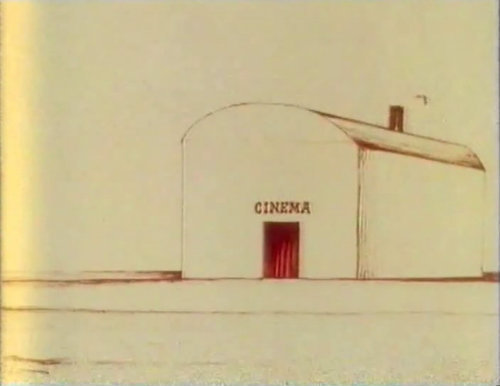 We begin with the origin of Mrs. Kabal, a recalcitrant creation who continually rejects the features prescribed by the artist, until both settle on her final, intimidating design: head like an artillery shell, nose like a meathook (in a film where both shells and hooks feature prominently) clad in a kind of cast iron bustier. After a brief dialogue with her nervous progenitor, she begins her adventures, accompanied by her diminutive husband, who seems to emerge into the film fully-formed.

Borowczyk was always a man who liked his narrative to be of the "non" variety. Even when distinguishable cause-and-effect type events are going on in his films, his palpable disinterest in the logic or otherwise of said events guides the viewer to focus instead upon rhythm, sensation, texture, sound-and-image juxtapositions, and all the other filmic elements which really interest him. And in Kabal, those elements are really all that exist. 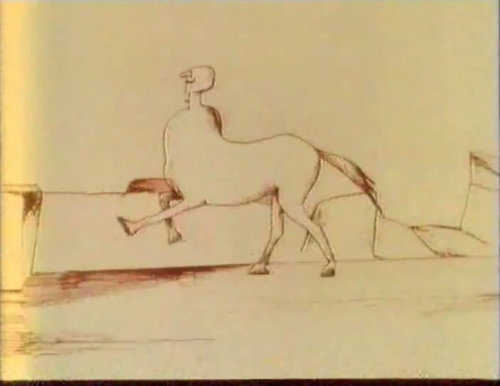 If the film sounds worryingly abstract, for sure, "stuff gets done"—unidentifiable wee animals scurry about, butterflies make a nuisance of themselves, Mrs. K watches wrestling matches and atom bombs on a kind of upright Mutoscope device, then stockpiles weapons of her own—it's also reassuringly funny, at least in places. The humor certainly comes and goes, with long stretches of hypnotically repetitive action which could be typed as running gags, but with the comedy syphoned off. But some of it is very funny indeed: when Mr. Kabal prepares to photograph his terrifying spouse with an old-fashioned hooded camera, we cut to the expected upside-down POV showing his subject, and her head, always rather loose, falls off, upwards, and clunks against the top of the frame. The variety of surreal visual logic crammed into that one gag is breathtaking. 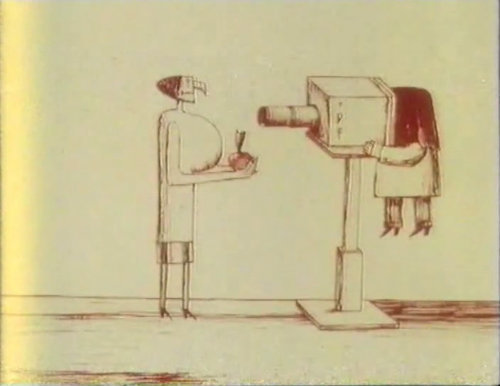 For all its darkness and dissonance, the movie has a reassuringly familiar air: the resemblance is to American cartooning, from the Fleischer Brothers to Loony Toons, though Boro might decry such an influence. The endless, barren and abstract landscapes at times evoke Chuck Jones' Nevada hellscapes from his Road runner series, while otherwise the flatness and desolation suggests minimalist cartooning from Krazy Kat in the newspaper funnies to cinema shorts like Out of the Inkwell: it's a world of empty space, inexplicable eruptions of violence, intrusions from beyond the frame by the artist himself, sundry violations of space-time (in such worlds﻿, the law of gravity is really more of a guideline) and a tendency towards disintegration, although everything always recovers from whatever outrage is perpetrated upon it (a bird  is shot with an arrow and fed to Mrs. K, who eats the internal organs, bones, and even the arrow—then the bird flies happily away, intact and healthy).

This lends a patina of harmlessness to what is otherwise an unsettling experience, with elements of Gilliam and Švankmajer﻿ (though Borowczyk predates both and certainly influenced the former). The movie extends playful tendrils into the future: a squiggly caterpillar traversing Kabal's scratchy-ink mesas will later return as the Claymation maggot worming merrily through Eraserhead, and one of those annoying butterflies—poetic pests!—will flap into Boro's final film, Love Rites (1987), to alight upon a voluminous pubic bush.

Which seems a fitting encapsulation of Boro's career arc, in a way.