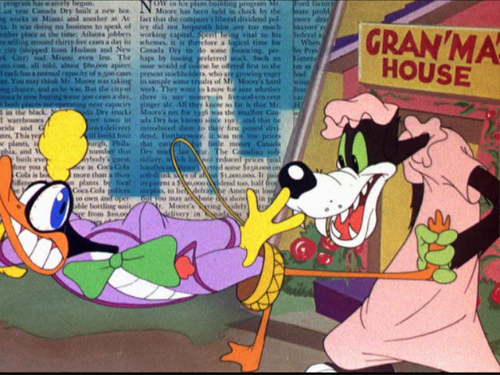 You know about in-betweeners? They're the people who, in classical studio animation, draw the characters in between the key poses. The key poses are drawn by the animator. In-betweeners may be less experienced, less talented, less smart, or not. Their work is certainly essential to the illusion of smooth motion.

Now, in Bob Clampett's Warner Bros. cartoon Book Revue (1946), there's a scene where Daffy Duck, dressed in a zoot suit, is attempting to save Little Red Riding Hood from the Big Bad Wolf (it's complicated—no, "complicated" isn't the word, it's batshit crazy). Helpfully showing what the Wolf does to little girls, Daffy sprinkles salt on her leg and mimes the act of gnawing, only to realize that the Wolf himself is just behind him, about to gnaw on his own leg.

Clampett has Daffy turn and perform one of those extreme takes popular with animators of the forties, in this case transforming bodily into a giant staring eye, with webbed feet. Clampett dutifully provides the key poses, above and below. 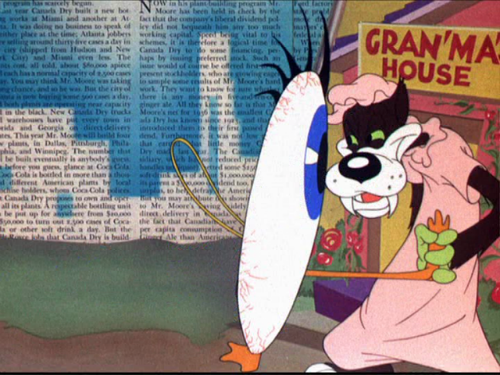 What this means is that the poor in-betweener is charged with the duty of creating an image of a horrific telepod mutation, half duck and half eyeball, in the act of turning. The resulting image, brought to my attention by animator Randall William Cook, should be considered the greatest artistic achievement of the twentieth century, or possibly the greatest achievement of any kind, ever. See it below: 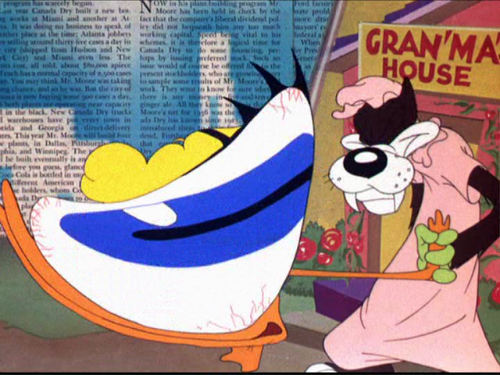 It does not, you will agree, disappoint. And yet this towering monument to human depravity flashes by at one-twelfth of a second, never consciously seen, let alone assimilated, by the normal human viewer. 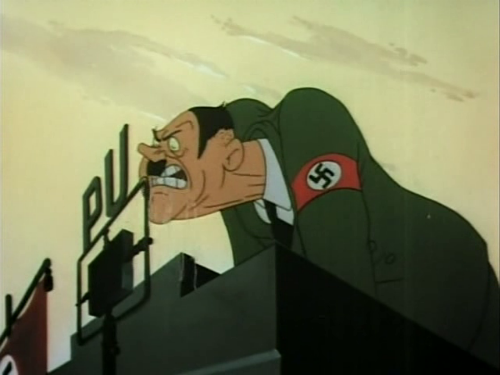 1943! Clampett's services are enlisted in the struggle for freedom! One result, Gremlin from the Kremlin (a.k.a. Russian Rhapsody, 1943), is particularly memorable. The cartoon posits Adolf Hitler flying a daring one-man mission to bomb Moscow, falling prey to gremlins, those folk-myth saboteurs of heavy machinery, in this case assigned, in a fit of premature anti-fascism and by some narrative sleight-of-hand, to the Bolshevik cause.

This certainly isn't one of Clampett's funniest, but it's memorably grotesque, and one can see how contemporary audiences would find welcome catharsis in the sight of Hitler electrocuted by a power cable wired to his nose, transforming into a lightning bolt, a contorted human swastika, a braying donkey and a Nazi skunk. Even today there's a pleasure to seeing history's greatest monster electrocuted in painted cel effigy. 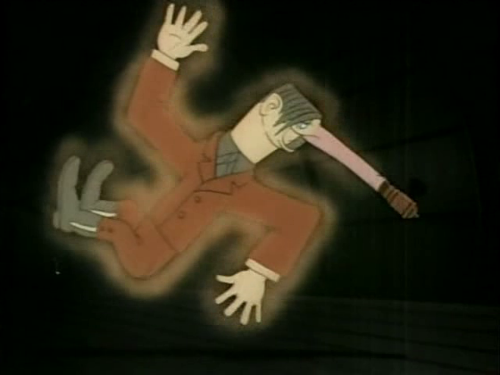 Indeed, since the gremlins are all apparently caricatures of Warners cartoon staff (the denizens of Termite Terrace), we can go deeper and say that the film represents, in a very literal way, cinema's revenge on the Third Reich. It's just like Inglourious Basterds only a twentieth as long and a millionth as unpleasant. It's still kind of unpleasant, though. 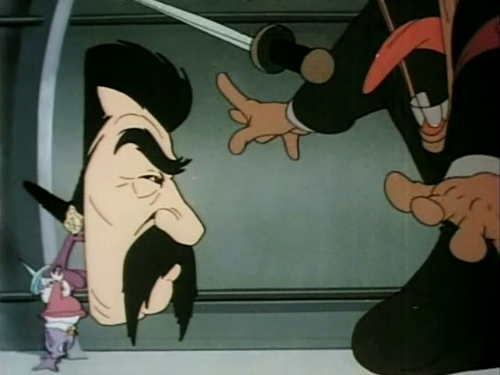 Clampett has a particular gift for capturing the baggy, doughy weight of mammalian corpulence, and Hitler is a gift in that department, so we get the sausage-like sag of Hitler-flesh over the back of his belt that so excited Salvador Dalí (his claim that his early enthusiasm for National Socialism was motivated by his passion for this anatomical feature of der fuhrer may seem opportunistic, but it is also, on reflection, insane enough to be true). And the racism of forties cinema is on display, as Hitler, smashed into the earth by his own airplane, rises from the grave with slanting eyes and bucked teeth, apparently turned Japanese by the impact. Actually, is that racist or just deeply weird? The caricature is certainly unapologetically racial, but I'm not sure I even understand the meaning of the whole transformation, so that's hard to comment on. 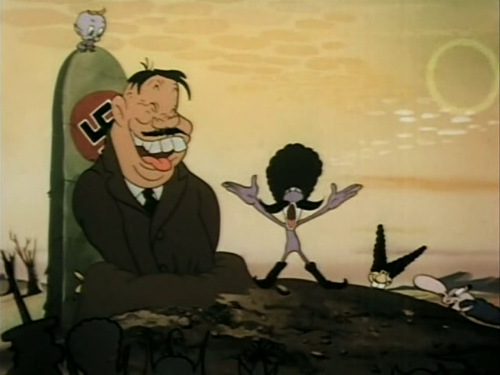 Of course, pretty much all the great Hollywood animators, and many live-action filmmakers, were guilty of racial caricatures which now seem grotesquely incorrect, and they were encouraged in this by the studios and their audiences. Clampett's most controversial work is still Coal Black and de Sebben Dwarfs (also 1943), a jaw-dropping pageant of inappropriateness, yet motivated by the filmmaker's love of jazz, and targeted at black servicemen who apparently lapped it up (the smutty humor helped). And it does contain a startling homage to Citizen Kane, with a close-up of a pair of enormous, voluptuous lips mouthing "Rosebud." 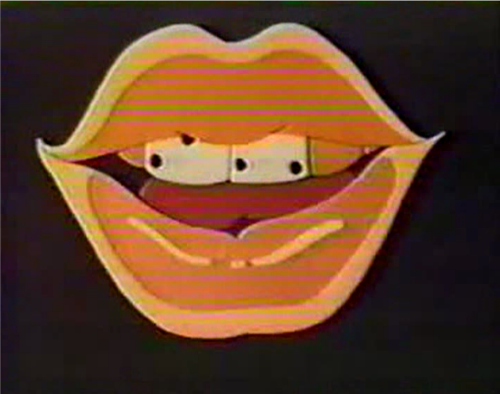 Thanks to Randall William Cook and Guy Budziak.