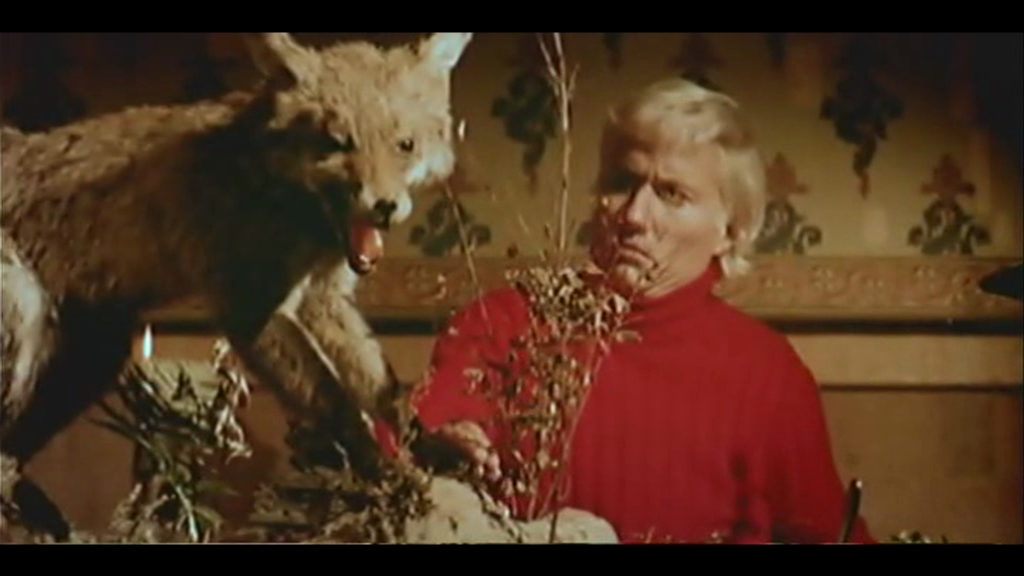 It's immediately clear why the original production title of the film was El Vampiro de la Autopista (The Vampire of the Motorway). It does indeed seem to be about an invisible vampire predating in motels. Not sure I could come up with a cheaper concept than that. I think the change of title was fortuitous, though star Wal Davis calling himself Waldemar Wohlfahrt could be considered unfortunate. 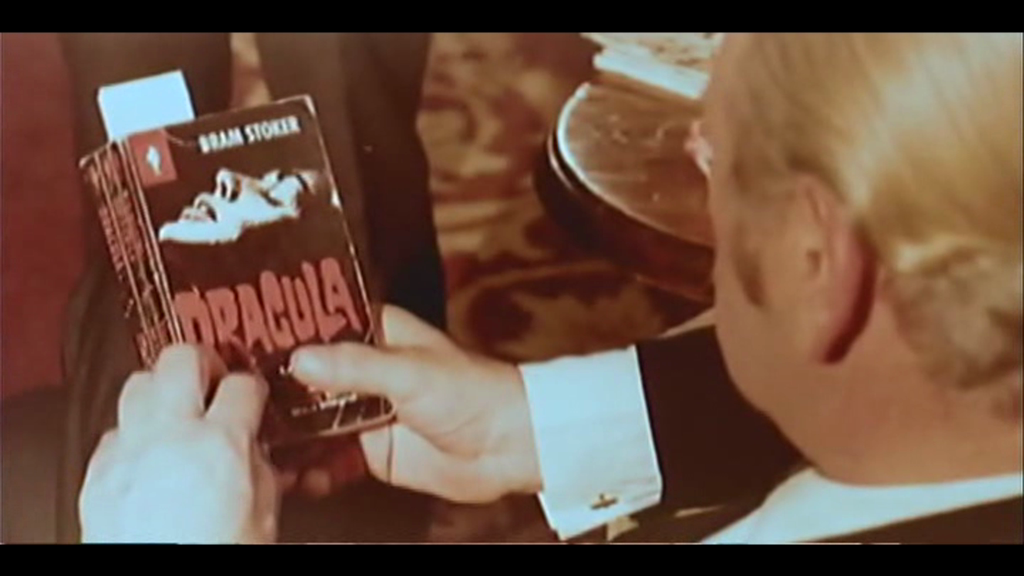 As the film starts, we're on the motorway and a woman is suggesting to her repulsive husband that they should stop at a hotel. Their they undress, and she reveals a body that's astonishing in a way I can't decide is good or bad. Her nipples are enormous, and dangerously prominent. It looks like she's been shot twice with toy arrows. Can nipples be so big they're not sexy any more? Well of course yes they could, if for instance they were big enough to get stuck in car doors, but these aren't that big. They're just big enough to be disturbing.

His nipples are sort of disturbing too. He's a heavyish sort of chap, and gravity seems to have pulled the entire surface of his body down, presumably causing the shoulder-skin to stretch to translucency, and this has lowered his nipples to around the bottom of his rib cage. I'm guessing one day his shoulder-skin will just snap like a pair of frayed suspenders and his flesh will just plop around his ankles leaving a big fat head balanced atop a skeleton standing in a mound of fallen fat. But that doesn't happen in this film, horrible and sexy though it might be, because he's set upon by the invisible vampire in the shower and then she's killed too. It's a sad film, in some ways. 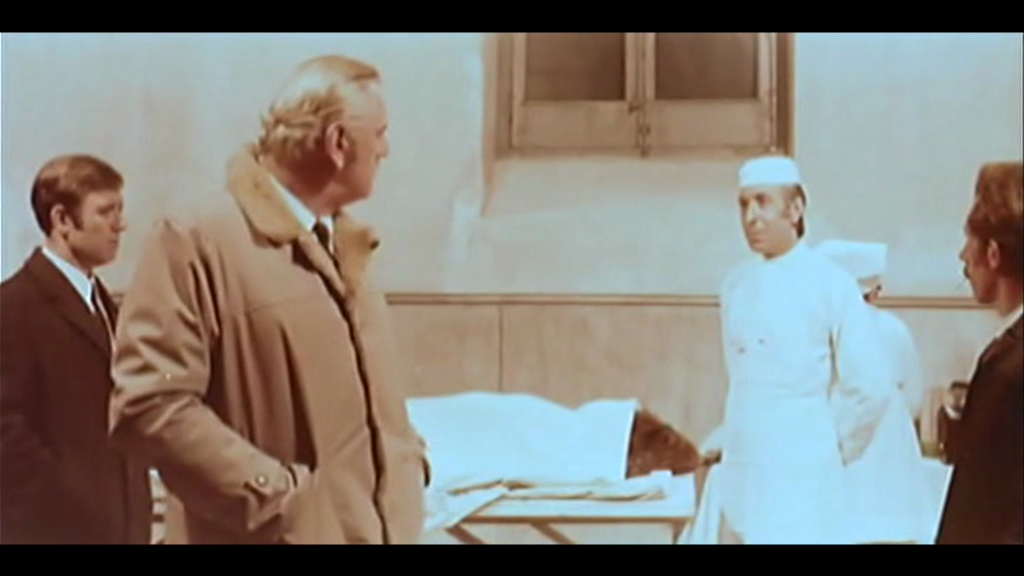 Now we're at the autopsy, where the coroner starts to explain his theory that the murderer is not human. The gruff police commissioner asks if they should be looking for some kind of animal. "No, I didn't mean that, precisely. I tell you what, come to my house for dinner this evening and I'll tell you my theory." The police commissioner accepts with enthusiasm, which tells me two things. One, he's not in much of a hurry to catch the horrible sexy motorway vampire, and two, the coroner has developed a really suave pick-up technique, one I don't believe is described in any manual.

"I'm bad at logic," admits the coroner during his postprandial briefing, a confession which should surely disbar him from his profession. He shows the commissioner a paperback of Dracula as evidence, which I'd have thought wouldn't be that persuasive. It's a work of fiction. If I thought the culprit in a murder case was a doctor, I wouldn't show the cops an episode of House to convince them. "Poppycock is the wrong track," decides the commissioner. And you know, under most circumstances, he'd be right. But not in this film. 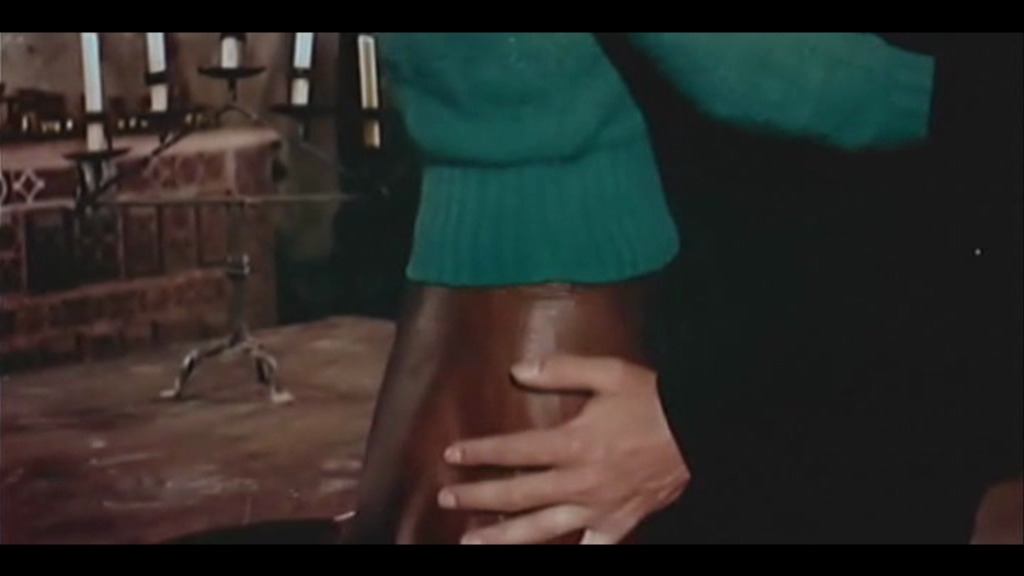 But he decides to search the local castle anyway, during which the cop assigned to wait in the car (why?) is killed by the horrible sexy invisible motorway vampire, who apparently doesn't confine his work to motels and the motorway environs. This scene isn't particularly horrible or sexy but does allow the soundtrack to do what it does, which is mainly wail rhythmically, like a yodeler having a panic attack. It's quite effective, actually, suggesting that though nothing very horrible or sexy is currently visible, it will be in progress soon. Bear with us, it seems to say.﻿

Did I mention that this film is pink? Almost entirely. It's gone rosy with age, like a drunkard. The motorway is a pearly pink, the gigantic nipples are rosy pink, the pitch blackness of night is pink black, the invisible vampire is transparent pink. I get claustrophobia in perfume stores, so this is the film's most disturbing quality for me, along with the dubbing, which always subtracts oxygen.

Anyway, twenty-five minutes in, everybody we've met is dead: the coroner, the commissioner, and, in a sense, the vampire. The film has to resort to importing a new cast, so a fresh commissioner is appointed and a Polish nobleman with an retina-blistering bleach job flies in, occasioning one of those interminable airport scenes which European films of the 70s imagined to evoke glamor.

Police commissioner: "The owner of the castle had no children."

Polish nobleman: "Are you referring to my mother?"

José Luis Madrid﻿﻿'s direction seems to grow more dilatory as the film goes on. A simple action, like getting out of a car and looking at a gate, takes seven shots. When the entire plot was explained in the first ten minutes, I wondered how they would manage to sustain interest for a feature-length running time, but now this becomes clear. I was a fool to worry.

"Pardon my indiscretion... but what is it you do in London?"

"Well, I'm not actually forced to do anything. I have a steady source of income and devote myself to my hobby of taxidermy. I should say I spend a huge amount of time doing that."

"How interesting. You're really most kind."

Badly translated dialogue is the way forward. I can't believe more deliberate use of this technique hasn't been made. You'll never get me to believe that the bizarre dead words in Von Trier's films are chosen with awareness of their hobbling inadequacy. And I should pause to genuflect towards the recently departed Mickey Knox, blacklisted actor who translated most of Sergio Leone's scripts, and thus gave us some really pithy one-liners but also baroque, shambling constructions like "Even when Judas hanged himself there was a storm too." We shall not see his like again.

I realize even though I'm reviewing this film, I can't really claim to have seen it, since the soundtrack is dubbed and the image track is pinked out of all recognition. So passing judgement on Madrid's work is unfair. Nevertheless, I feel that a filmmaker who needs seven shots to show a count looking at a green gate is not going to have Luchino Visconti looking anxiously over his shoulder. 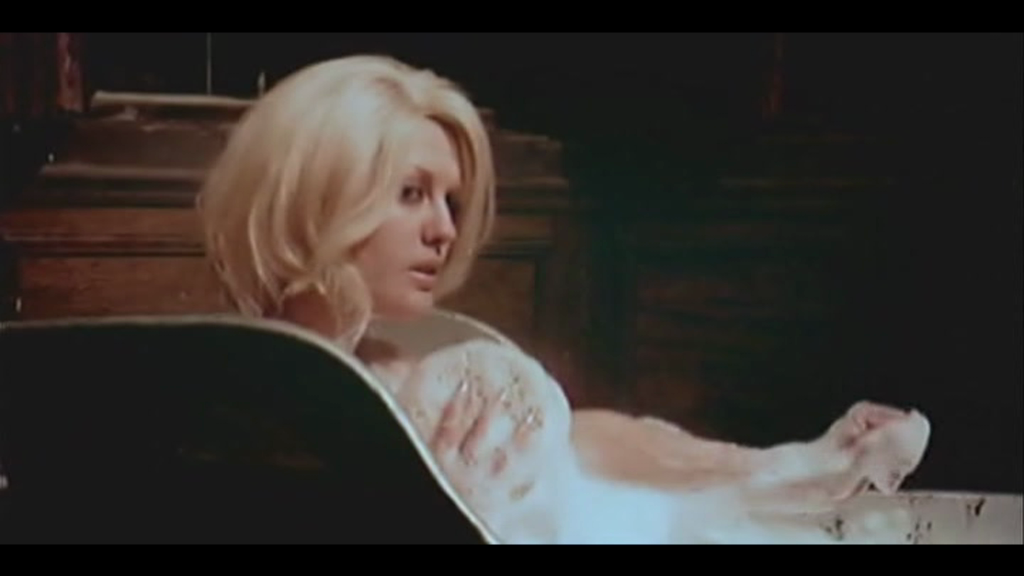 Adventures In Seediness: Michael Winner auditioned Jeff Goldblum for the role of a degenerate criminal in Death Wish by having him rape a chair in the director's office. I thought that was going the limit in terms of actor humiliation, until I learned that Kubrick auditioned young women for Clockwork Orange by having them mime being raped by invisible assailants (his imaginary setting was a forest and the men were soldiers, identifying the scenario as a mentally deleted scene from Fear and Desire). Mr. Madrid/Wohlfahrt has taken this a step further by making it the basis of his film, more or less. The signature scene is a naked woman with huge, red hair and huge, red nipples pretending to be strangled and vampirized by the man who isn't there. It is horrible but I'm not sure it can be considered sexy. Sexual, maybe, in a way. A stupid way.

The best cut in the film: our moth-eaten Polish count strips away his equally blonde girlfriend's bra and discards it on the castle flagstones. Cut to the watchful visor of a suit of armor, whose iron snout mirrors the conical rigidity of the doffed undergarment. It makes you think about design, about history, about protective clothing. There's a whole world of philosophy in that splice. 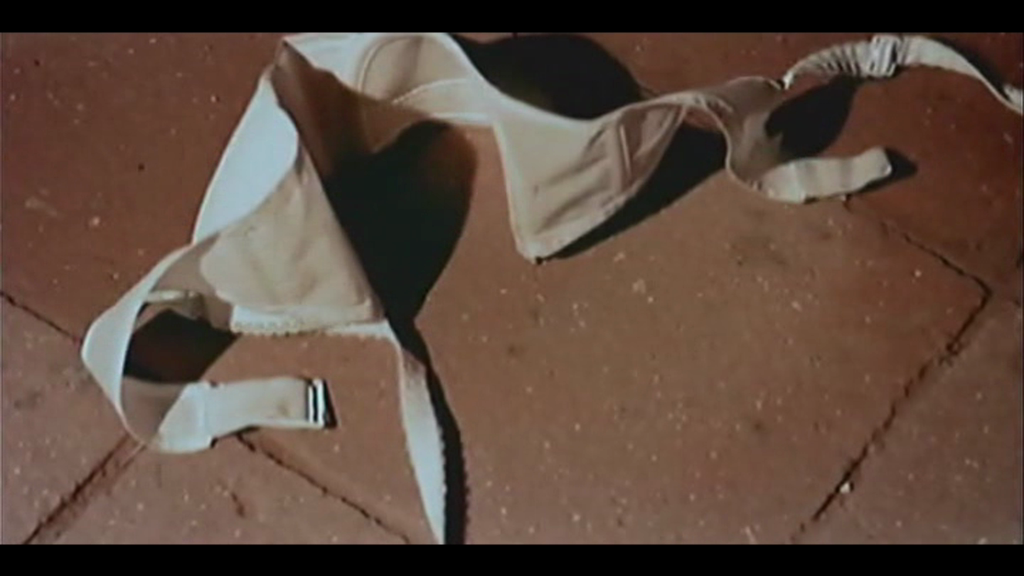 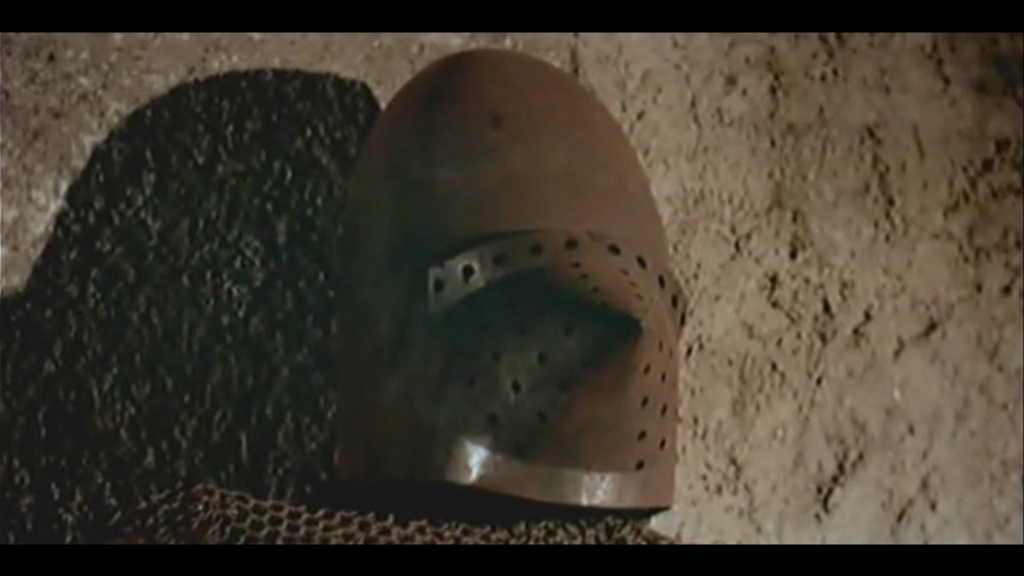 Unfortunately, the film has twenty minutes to run. However, I find I'm becoming inexplicably fond of the Polish count, even though looking at his hair is like gazing upon the sun. But he's a toffee-nosed Polish nobleman who drinks himself unconscious every night in his haunted castle and has a hot girlfriend but prefers to arrange dioramas out of roadkill: how can I not warm to the guy. I think he should have his own series of films: The Tipsy Pole Investigates. Or fails to investigate. At any rate, I'm going to be upset if he dies, or turns out to be the horrible sexy vampire.

Will the perpetually-sozzled aristocratic taxidermist with the blinding barnet thwart the horrible sexy invisible vampire of the autobahn? Or will they turn out to be one and the same, and if so, will he have to thwart himself? I'm not going to spoil it for you. The filmmakers have already done that.

The Forgotten is a fortnightly column by David Cairns, author of Shadowplay.﻿﻿ ﻿