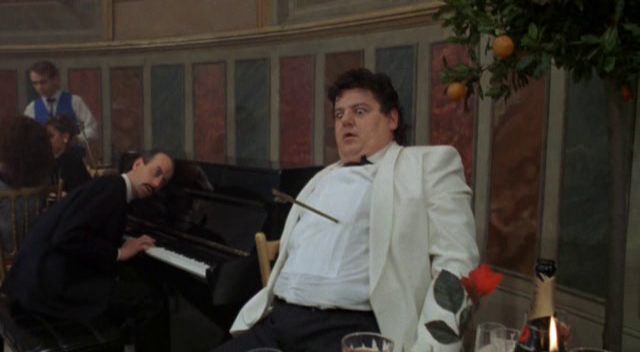 There's a pernicious misapprehension afoot that the Brits are the polite ones while Yanks are inclined to brusqueness or brashness, but a comparison of the varied reactions to the deaths of Ronald Reagan and Margaret Thatcher would seem to give the lie to this. While "The Great Communicator" was hailed for ending the Cold War (something surely Mr. Gorbachev deserves some credit for), with little mention of his disastrous economic policies and illegal covert wars, Thatcher has received her due as a "divisive" figure, even on the BBC. And, as I write this, there is a genuine chance that "Ding Dong, The Witch is Dead," will reach number one in the UK charts.

Nor were the British uniformly polite about her when she was alive. The Tories gave no encouragement to the art of cinema, or most of the other arts. Invited to talk about her favorite works of art on television, Mrs T chose a revolting figurine showing British squaddies reclaiming the Falklands, and cited bearded didgeridoo-botherer Rolf Harris's twee "Two Little Boys" as her most-loved song.

The movies had their revenge. What is the defining statement of British cinema on the Thatcher years? For most of the period, leftie filmmakers like Ken Loach were simply unable to get projects bankrolled, but others did. The socially conscious films that received praise were the Hanif Kureishi/Stephen Frears joints, My Beuatiful Laundrette and Sammy and Rose Get Laid, which aimed to capture the spirit of greed consuming the land, but ultimately they strike me as too timid, too middle-class, to do the job, and the jokes aren't any good.

Lindsay Anderson's, brilliant and scathing Britannia Hospital is nearer the mark. Conceived as the Labour government sank under an onslaught of strikes, it was produced as Thatcher came to power and swiftly became the least popular prime minister in history, but came out just as the Falklands War transformed her reputation with a wave of bullish, belligerent patriotism: a poster showing a bandage-swathed figure wielding a Union Jack had to be abandoned, and the movie died a death, ignored by the public and reviled by critics.

In fact, the movie has as much of the right wing as the left in its splenetic rage, with some embarrassing racist humor and a desire to stick it to the unions which echos the classic I'm Alright Jack. The Queen is treated with considerable respect, even if she does make her entrance in a body bag.

But in the scene where the late, great Graham Crowden drinks a human brain fresh from the blender, the movie hit on the defining metaphor of the Thatcher years. Peter Greenaway picked up the motif in The Cook, The Thief, His Wife and Her Lover, where Michael Gambon's gangster was intended as the embodiment of the gross, brutish philistinism of the age, and his forced chowing down on a roasted Alan Howard made some kind of visceral statement about something or other.

Eat the Rich (1987) did not receive the same critical respect as Greenaway's richly-hued, Gaultier-designed art object. A loud, ugly satire, it turns the Thatcher era's own vulgarity and violence against itself. Like Britannia Hospital, it's more angry than it is funny, but a cool analysis of the state of the nation reveals that spittle-flecked fury was the only appropriate response.

The film opens in a restaurant called Bastards, in which the new and old rich gather to eat meals made from endangered species. One strand of the film's shaggy-dog story deals with Alex, played by black transexual northerner Lannah/Al Pellay, who is fired as a waiter but returns as an armed revolutionary to massacre the restaurant's staff and customers with a bow and arrow, before serving them up to the next batch of customers. 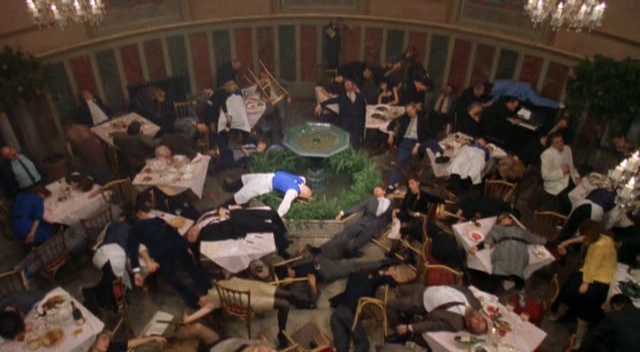 For some reason, there's something comical about people being pierced with arrows. Perhaps it helps if the people include Robbie Coltraine (very funny and over the top in a bit part). Sudden wooden shafts popping from people's torsos just seems to tickle me. Nobody could really argue that the massacre and subsequent cannibalism are defensible, but in the face of intolerable societies, indefensible acts seem to become the only possible response. And at least making films about them is cathartic. The school shooting at the end of Lindsay Anderson's If... still seems invigorating, even in the wake of far too many horrific instances of the thing in reality. 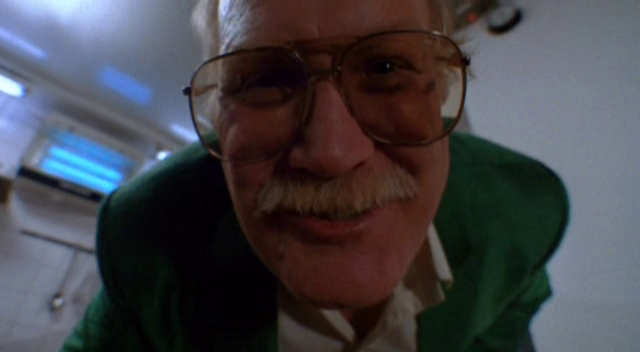 The film's other major plot point concerns Nosher Powell, a real-life boxer and stuntman playing a cartoon version of himself, a cockney hard man who has somehow (in the film's world) become home secretary (or "'ome sec" as he puts it). There's a Russian plot underway to overthrow him, and eventually a plan is hatched to photograph him eating the prime minister at the titular restaurant...

Skeptics may argue that much of Eat the Rich is not just bad taste but bad. Richardson moves the camera with big-budget enthusiasm, craning, helicoptering and steadicamming all over the place, and accompanies his most frenetic sequences with a pounding soundtrack by Motorhead. The script has some real, er, bite. But it's also at times slackly edited, has weird scenes played earnestly but feeling like camp, and others that aim for laughs without actually supplying anything to laugh at. The performances are all over the place, from music hall romping (Jennifer Saunders) to incoherent screaming (Shane McGowan) to quiet dignity and grace (courtesy of Lemmy from Motorhead, and I'm not kidding). 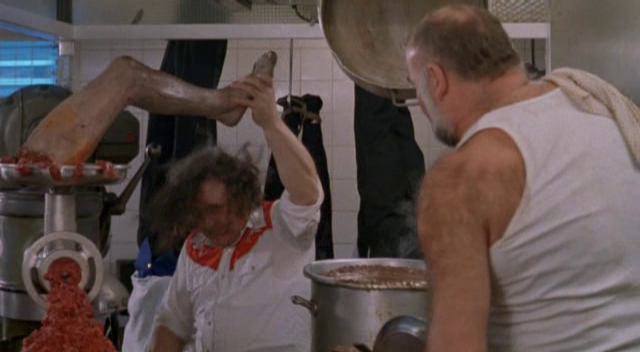 None of this matters. In its shrillness and ugliness the film says more about the spirit of Thatcher than any well-meaning liberal "provocation." The social realism of Loach reveals only the surface of things, but Richardson's caricature stabs a rusty bradawl right into the pustulent heart of the nation.

In choosing a working class figure like Nosher Powell to embody the sado-monetarist regime, Richardson and his co-writer Pete Richens pulled a shrewd move. While Thatcher was middle class to her core and seemed to despise the working class, she couldn't have done what she did without their support. Social mobility, then as now, was the chimerical promise with which the poor were distracted from improving their plight as a class. Instead, individual aspirations were encouraged ("Greed is good," "Never mind Jack, I'm alright"). Nosher has made good, and he stands as a beacon for others.

While topical comic turns like Harry Enfield's character Loadsamoney (a parody of nouveau riche gloating) were embraced as avatars by the very swine they were supposed to satirize (just as Alf Garnett, homophobic racist, had been adopted by the Sun readers he'd been designed to lampoon), Nosher Powell was never subverted by the acclaim of the hoi polloi, because nobody ever really noticed him or the film he was in.

Americans may find Nosher's accent and patois dense and baffling, but don't let that worry you: most Brits struggle to understand half the guff bellowed from his huge steam-shovel jaw. In elevating this non-famous person to the status of movie star, while allowing only minute cameos for the likes of Paul McCartney, Bill Wyman (in the meaty role of "toilet victim") and Miranda Richardson, Richardson seemed to be laughing at a private joke, but all his lead actors have some sort of star quality. Powell is a wrecking ball of testosterone, Pellay can't act but projects killer attitude, and suave Ronald Allen was rescued from daytime soap purgatory to lend sepulchral charm to his Russian sleeper agent role. 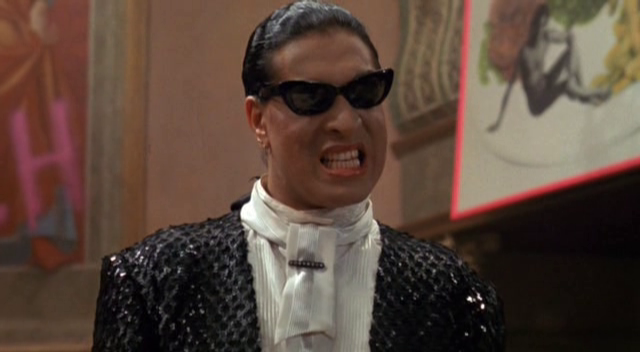 Add to this the finest ending of any British film of the decade, a mordantly funny slice of spaghetti western nihilism, and you have a film that in its mess, its outrage, and its calculated offense, captures the time and place it exploded from and incarnates the spirit of Thatcher in a bistro where Koo Stark and Sandie Shaw dine on human flesh.