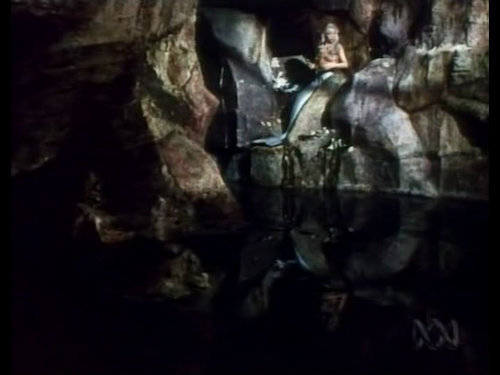 Meanwhile in America, William Powell romanced mute mermaid Ann Blyth, an apparent manifestation of his mid-life crisis, in Mr. Peabody and the Mermaid. (Tarzan and the Mermaids, the same year, did not supply any true amphbious ladies.)

What do these fish stories reveal about their respective countries of origin? None of the films' directors have much in the way of auteur credentials—Ken Annakin directed the first Miranda film, staying true to the tradition of innocuous entertainment which was the defining quality of his career, and Ralph Thomas directed the second: though his son Jeremy has produced major films for Bertolucci and Cronenberg, Ralph mostly confined himself to jocular romps of the Doctor in the House variety. And the US film had Irving Pichel at the helm, whom I can't really take seriously since seeing him as a mentally-challenged, knife-obsessed Lonesome Lenny type in 1931's Murder by the Clock. So what concerns us is the film's performance as unconscious barometers of the national psyche, rather than their intentions, if any, as works of art. 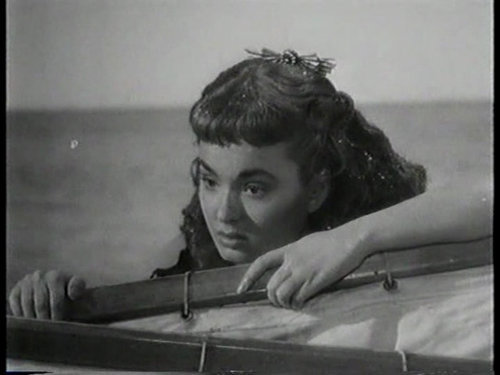 Peabody, in fact, has ambitions beyond being simply an amusing and charming fantasy, though it is that. Mr. and Mrs. Peabody are holidaying in the West Indies, when Mr. P snags a mermaid. He intends to return her to the sea, but drink is consumed, leading to him installing her in his holiday home's capacious aquarium. "No decision involving mermaids should ever be made with even a suggestion of liquor under one's belt," he later has cause to reflect.

The movie is pretty explicit about Peabody's complaint. "Who's fifty?" he demands, when his wife ascribes that age to him. "I'm forty eight, if you want to be accurate." To which she gently yet devastatingly replies, "If you want to be accurate, you're forty-nine." The tolling of midnight brings in his fiftieth year as the film is unspooling.

Though silent save for her siren theme song, Blyth's fish-girl is fiercely devoted to her adoptive biped, even biting a rival's calf when challenged. Despite this ferocity, Peabody's narration declares "I like girls who can't do anything." Is he talking about helplessness or sexual inaccessibility? Peabody takes a long time to figure out why his wife is so jealous, seemingly because he regards his mermaid relationship as entirely innocent. And so, you would think, it must be, given the anatomical differences. But there's certainly a lot of kissing going on... One supposes kissing is all a mermaid can do in that department... almost. 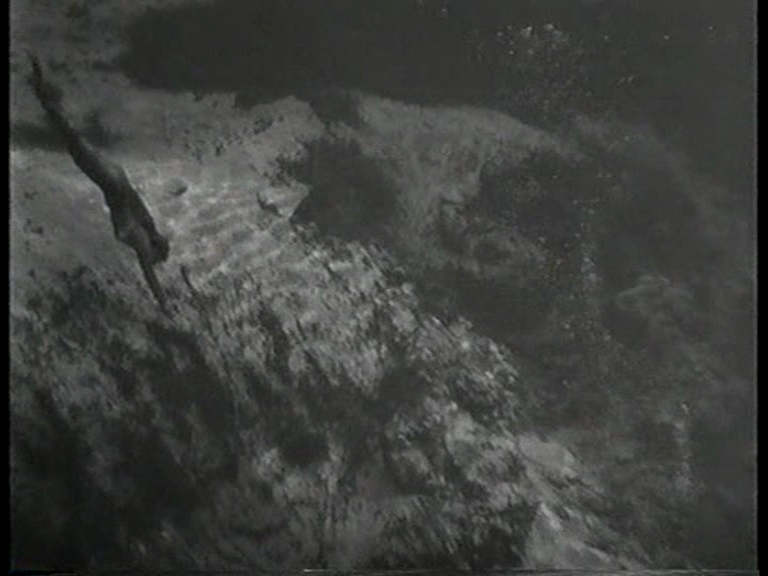 This Thurberesque fantasy, scripted by Nunnally Johnson, nicely combines a very clear allegorical element (into each middle-aged William Powell's life a mermaid must swim) with dizzying, unaddressed multiple ambiguities, and plays by the Hollywood Rulebook in finally deciding that Lenore ("that fair and radiant maiden") is both imaginary and real, like Oz, or Harvey the rabbit.

Miranda in Miranda is more vocal (with the delightful throaty voice of Glynis Johns) and more self-directed. Also apparently more biologically compatible: what Miranda wants is men, lots of them, and she doesn't care about the social mores which normally prevent 1940s/50s heroines from going after them. So she creates romantic chaos wherever she goes, and what's better, doesn't get punished for it. If this were a Hammer horror﻿, she'd end up with a stake hammered into her. She doesn't get a stake hammered into her... Instead, the first film fades out on Miranda cradling an adorable mer-baby, apparently the love-child of one of the film's three leading men. We never learn which, there are no unhappy consequences, and Miranda is in no way condemned for behaving according to her amorous and pragmatic nature. 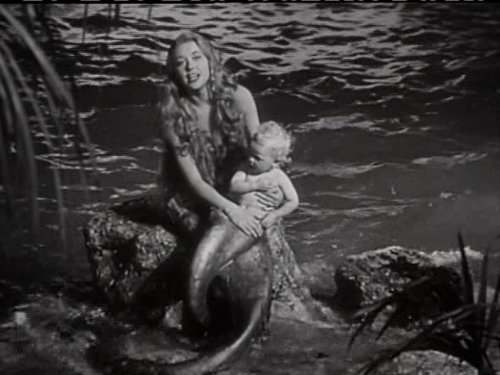 While both manatees are embodied by topless and artfully draped glamor girls, Miranda exists unambiguously in her film's reality, rather than keeping one fin in the leading man's fantasy world: she has needs of her own. Which helps make Miranda the naughtier of the two films. In her sea-cave home, she's acquired a collection of steamy magazines swiped from ships. The trouble is, so many of the serials are incomplete. "Do you know what happens to Amber in chapter 18?" she asks. "Same as in chapter 17, only twice," says her latest catch.

By the time of the Technicolor sequel, Miranda has conveniently offloaded the baby, so she's still footless and fancy-free, and acquired an identical human cousin (identical from the waist up, anyway). This leggier version of Glynis Johns arrives in Cornwall wearing a beautiful pea-green suit that puts you in mind of another blonde heroine's arrival at a coastal community, in The Birds. And the sight, and sound, of two Glynis Johnses on screen at the same time is almost too sweet to take. I was getting diabetes just looking at them. 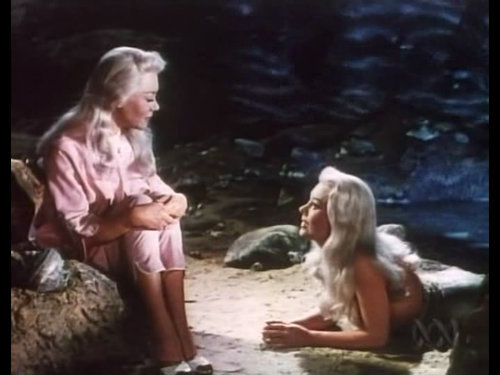 Miranda also has a half-wit mermaid friend (Dora Bryan)—"Her mother was frightened by an octopus"—and a new stable of men. Miranda's men across both films form a near-definitive bestiary of low-grade male beefcake of the post-war British cinema.

1. Griffith Jones is now best remembered as Narcy (short for Narcissus) in Cavalcanti's They Made Me a Fugitive, a villainous "spiv"—as romantic lead he's a little bland, but his light comedy timing is decent.

2. David Tomlinson would later play husband to Glynis Johns in Mary Poppins. In that film she's campaigning for women's suffrage, whereas here she asserts her natural rights as a woman in a different way. Tomlinson, a master at playing dithering middle-class schnooks, is oddly cast as a working-class chauffeur. Nobody truly working class was allowed any real romance in Britain.

3. John McCallum is the Bohemian one, the artist upstairs whose brylcreamed mop Miranda tousles. In reality he was married to Googie Withers, who plays Jones' wife. One of the charming qualities of this most charming film is that Withers doesn't play a jealous wife like Mrs. Peabody. She's aware and amused that her husband is being tempted by a young blonde, and she's going to make sure she's there to see him make an idiot out of himself.

4. There are three men in Mad About Men too, but the only one who concerns us is Donald Sinden. I just can't explain who he is. British people of my age are simply born knowing him. His voice is plummy, and rich and fruity, and he's Merrie England itself.

Playing a mermaid must agree with one: both Ann Blyth and Glynis Johns are both, happily, alive at the time of writing. So is Sinden. I wonder if he gets together with Glynis sometimes, and if she squeezes into her rubber tail (specially built by tyre manufacturers Dunlop ) for old times' sake? I like to think so. 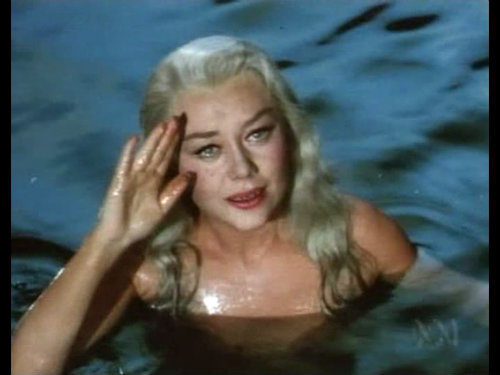