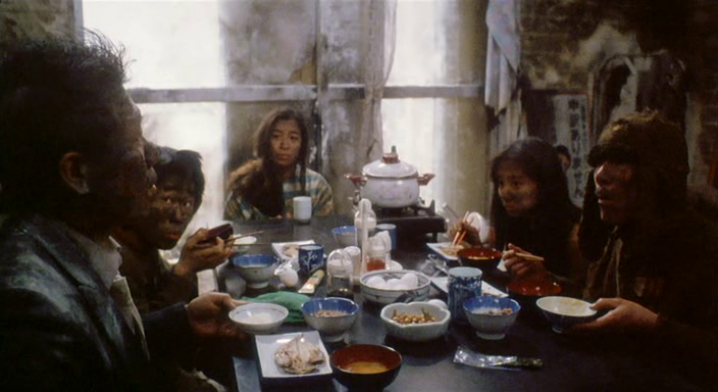 I first became aware of Sogo Ishii's The Crazy Family when it got a UK release around 1985. Most western critics found it wearisome and baffling, and I didn't go. Five years later, a Japanese friend showed it to me—he'd already won my confidence by introducing me to Miyazaki's films, still largely unknown in the West at that time. Neither Miyazaki's Totoro nor Ishii's Crazy Family had subtitles, so my friend served as amateur benshi translator, offering some English language help approximately once every ten minutes. Now I've finally seen both with subtitles, I can't say being unable to follow the dialogue greatly hurt either film, since what they really speak is the language of cinema.

But Ishii, inspired by the punk rock ethos, is a very different creature than Miyazaki: his jet-black satire perhaps depends on an awareness of Japanese culture, hence his success at home and puzzled reactions abroad, but since my friend was around to say things like "Buying first home is very big thing in Japanese society," I had a kind of leg up. 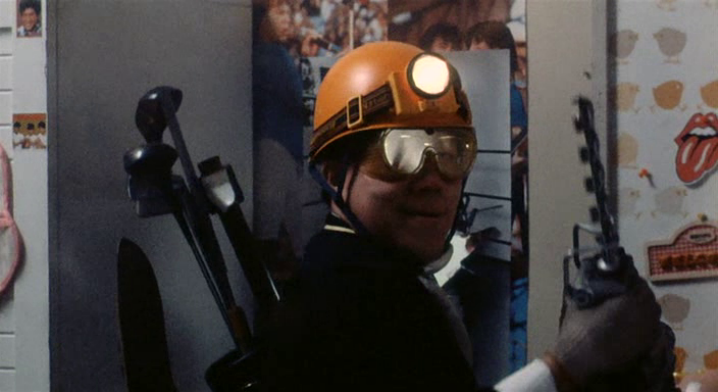 The titular family, outwardly sane at the film's start, move into this new home in the suburbs (situated at the end of a street like the one in the original The Ladykillers, so it can be dramatically framed, but identical to all the others so it can be subsumed into the cityscape via crane shot). Father, mother, son, daughter (played by Youki Kudoh in her debut: later she'd play a Japanese tourist in Jarmusch's Mystery Train). Each has a bit of an obsessive side, maybe, mirroring different aspects of Japanese culture (work, domesticity, study, health and beauty), but things only get fraught when granddad moves in. There's nowhere to put him, so dad starts digging a hole to create a basement. This becomes rather too important to him, until he starts experiencing exponential zoom trombone effects in the office. Then this happens:

It's all heading for meltdown, where the title's more literal translations, "The Back-Firing Family" or "The Fucked-Up Family" come true. The son retreats to his room and becomes a kind of sci-fi vampire, dark rings around his eyes, studying around the clock, stabbing his thigh with a craft knife to stay awake and study more. Dad discovers an infestation of termites, buys bug powder and tries to use it on his kin. It all seems kind of tasteless, then granddad puts on his WWII uniform, ties the teenage Kudoh up with her skipping ropes and feels her up. The intent isn't pornographic, although of course it intersects a brand of perversion more visible in Japanese porn than elsewhere... It's more gleefully sick than pseudo-erotic. 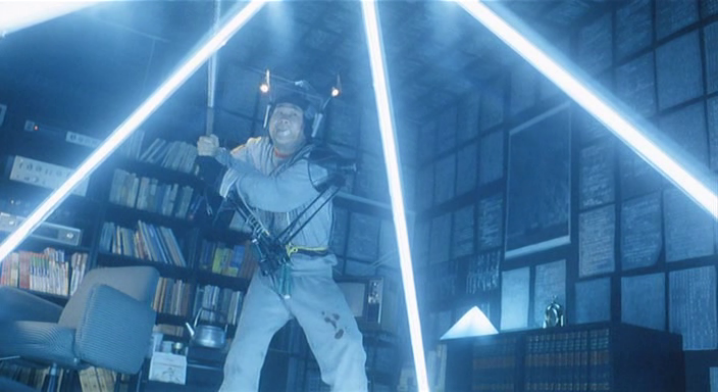 The ensuing pitched battle features all the family members arming themselves, in percussive montages, with the tools of their obsessions, so dad has his power tools and gold clubs, son has his sharp, sharp pencils, baseball bat, and a standard lamp fastened to his arm as exo-skeleton, and best of all, mom has a Ned Kelly cyber-samurai suit of armor made from pots and pans, a sieve on each breast like a domestic valkyrie. 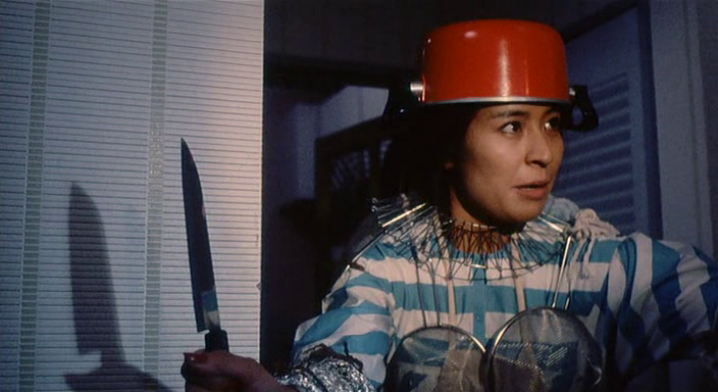 The take-no-prisoners punk attitude, wielding satire like a cudgel, is yoked to a hyperkinetic visual style with echoes of Sam Raimi (who pilfered his moves from Eastern cinema anyhow). Ishii, who changed his pseudonym from Sogo to Gakuryu for some reason, is now an aging enfant terrible, tossing off the occasional samurai epic, superhero adventure or serial killer thriller, with new-found spiritual concerns blended in, but back in the 80s he combined the cartoonish vulgarity of Frank Tashlin with an aggressive camera style closer to Andrzej Zulawski. In other words, like nobody else, like nothing on earth.