Amaaaazing experimental cinema from Henri Chomette, entitled Jeux des reflets et de la vitesse﻿ (Games of Reflection and of Speed, 1925/6). Quite a few filmmakers were exploring the possibilities of abstract movement in the twenties, dispensing with narrative and focusing on the unique formal properties of film. Chomette just happens to be one of the best.

There are bits here of Kubrick-Stargate-kinetic-awesomeness, especially when he dissolves between movement forward and movement backward, and you get a vertiginous tromboning of space that arches your back and goggles your eyes. I'm also reminded of the sequence in Rodney Ascher's Room 237 when The Shining is projected forwards and backwards on top of itself at the same time... 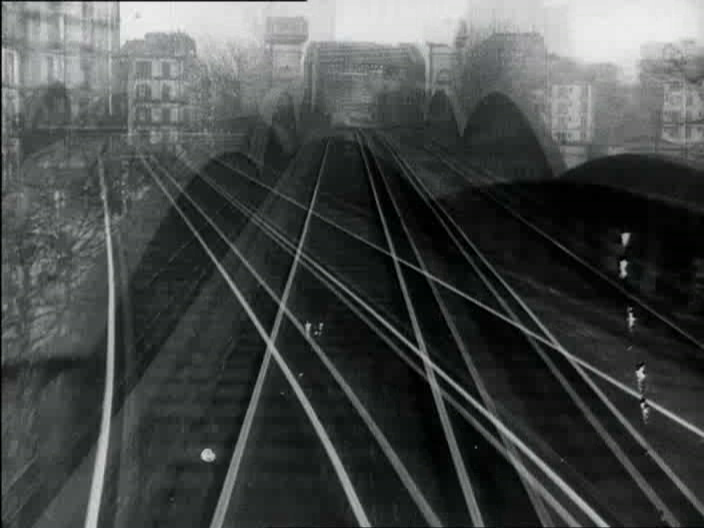 And there's an excellent surprise moment when we emerge from a tunnel and find ourselves... not where we might have expected.

Backstory: Chomette had partnered up with Man Ray, as I understand it, to produce a two-part film with the alluring title À quoi rêvent les jeunes films﻿?(What Do Young Films Dream About?). But the two filmmakers quarreled with whoever it was commissioned the film (lacking a research budget, I'm only going on what I can glean—corrections and elaborations are welcome) and the movies ended up released separately. Man Ray's section, Emak-Bakia (recently the subject of an exploratory documentary) went on to cause a riot at the premiere and eventually to take its place as a classic of the form. Whatever its initial reception, Chomette's movie seems to have virtually vanished—until now!

The film is apparently incomplete. Also, we have no soundtrack. You might try the following...

...although it's a bit too short. Or maybe you can find something of your own.

Chomette, despite his artistic radicalism, turned out to be a real conservative, and not in a good way. In the early thirties, he was prominent in a group of French filmmakers protesting against the influx of foreign directors, crew and actors—fugitives from Hitler—who he felt were diluting or indeed poisoning the national cinema with their sinister non-Gallic ideas and identities. His great enemy became Robert Siodmak, who christened Chomette, who was the lesser-known brother of René Clair﻿, "le Clair-obscur" (the clear-unclear/the chiaroscuro/the unknown Clair). It's a French pun and it might not sound very funny in English, but it stuck. Chomette's rejoinder, if he came up with one, has not been handed down to your humble correspondent.

The Forgotten is a fortnightly column by David Cairns, author of Shadowplay.