The crows knew it from Day One: Berlin 2011 would be a—slightly—happier experience. Normally, when night began to fall, the crows descended upon the frost-bleak trees around Potsdamer Platz and cawcawed for hours, filling the silence of bad cinema, crushed hopes and now-for-real lost illusions with their woe-cum sorrowful sounding songs. Hundreds, maybe thousands of them. The trees were black for birds. Every evening, starting around 5pm or 6pm, reliably—you could set your watch to them (if you take things easy, that is...). Yet, this time around, the crows were nowhere to be seen. Maybe it's true what a friend of TO1..., comrade Möller suggested: It looks as if the crows were trying to make Berlin their permanent home, become true city slickers, which necessitates certain changes of behavior; rings scientifically solid. Still, we couldn't shake off the feeling that they somehow sensed a thing or two, understood we didn't depend on them for solace and comfort as well as entertainment the same way we did for at least a demi-decade, when these curious creatures were all too often the only inspiring sight to be had on an average Berlinale day.

Which is to say that the crows might have been smarter than many of the human(oid)s present; read: Now that the Berlinale finally delivered an edition more on the bountiful side, folks got into bitching for real—something they should have started at least three, better five years ago. True, over the last couple of years, more and more people voiced their discontent, but it was only now that the general mood turned from disappointed to pissed.

That said: Getting tough with Kosslick et al. probably doesn't help anyway. Last year, at the opening, Everybody's Dieter had tried to crack a joke about critics which was met with a determined silence punctuated by a few more dutiful than heartfelt sounding hahas (We found out about this only later, last summer, when in a moment of Heightened Abstract Ferronian Fervor we decided to tough our way through the official TV-presentation of said eeeeeewent which TO1..., comrade Wurm had taped for future reference; after that, we must have watched at least three Cottafavis, three Ėrmlers, three Krens and three surf movies by various auteurs plus some choice nuggets of anonymous internet porno from Fin- and Switzerland to regain our spiritual balance.) To us this looks as if: The FRG film power elite and its flock of willing collaborators from all over the world knows that there are many who despise their ways, but they simply refuse to give a shit; in German, this behavior is colloquially called schmerzfrei = beyond pain. Something serious will have to happen to make them reconsider their ways—which reminds us of the FRG's current atomic energy politics...

Now, we don't want to sound as if the 2011-edition was fundamentally different from, let's say, the last six. Grosso modo, the program was the by-now generally expected heap of lower middle-brow fartsyhouse fodder—films on roughly the same level as the food you get at the Potsdamer Platz-mall: Good for marking time but little else (taste: 0; nutriment: -2). But, BUt, BUT: In this mass of a mess, we found an unusual number of remarkable, even outstanding works. How they got there? Who knows. In most cases, the answer's probably: connections and standing—business as usual, just with a bigger number of worthies. Which holds definitely true for a.o.: the sublime Eine Serie von Gedanken (A Series of Thoughts) by Forum-axiom Heinz Emigholz; il whacky-wonky Jagadangchak: shidaejeongshin kwa hyeonshilchamyeo (Self Referential Traverse: Zeitgeist and Engagement) by Forum-hardened Kim Sun; Panorama-regular Konstantinos Iànnaris' entrancing—by now (not necessarily to its advantage) re-edited—Man at Sea; Jóse Padilha's ballsy Tropa de Elite 2: O inimigo agora é outro (2010) which puts his Golden Bear-winner into different perspective (still, seen on its own, the 2008 Tropa de Elite remains more than a little dubious); Elfi Mikesch's wryly loving tribute to one of the few truly deserving Golden Bear-honorees, Mondo Lux – Die Bilderwelten des Werner Schroeter (Mondo Lux - The Visual Worlds of Werner Schroeter); and 2010-jury El Supremo Werner Herzog's  mesmerizing mix of 3D-thrill ride, Kulturfilm and quizzically Marker'ian rumination, Cave of Forgotten Dreams. As for Václav Kadrnka's remembrance of a concrete-colored Gottwaldov-childhood, Osmdesát dopisů (Eighty Letters), the most impressive debut around: Someone must have had a moment of most uncommon clarity...And as for Volker Sattel's ironical reminiscences from a journey into a now historical future, Unter Kontrolle (Under Control): Berlin would have shown that even if it were a failure and not the triumpth it turned out to be—the history of nuclear energy in the FRG is too loaded a subject to miss.

But let's talk donkey. For things weren't that easy: Two truly Ferronian monuments, Tarr Béla’s A Torinói ló (The Turin Horse) and Zeze Takahisa's Heaven's Story, couldn't be considered as some hands-up-hands-down-bunch or other already recognized their excellence. That Tarr's paean to potatoes mashed the hard way would end up among the awardees came as a genuine surprise: Looking at the main jury's well-displayed will to get along just super and despite making a misguided if well-meant and hopefully heart-felt charity event out of the Big One (immediately nick-named Green Bear...), they still managed to agree on honoring one of the most stubborn films in a thousand years (Also, they found it in them to give Ulrich Köhler a prize for his Schlafkrankheit [Sleeping Sickness], a particularly smart and blissfully crazy FRG competition entry. Which is a rarity, as enforced by The Other Deutsche Option: an execrable attempt at reducing the RAF to the level of prick power; sad to say, it still managed to score as well...sic transit gloria mundi).

But now: The Awards!

And the Golden Donkey goes to: Mišen’ (Target) by master Aleksandr Zel’dovič

Yes, we don't hesitate to call a spade a spade and a master a master.  And few others in modern cinema deserve that honorific as much as Zel’dovič : Three fiction features in three decades plus—Zakat (1990), Moskva (2000), Mišen’ (2011)—each one a different experiment in epic story telling, each one a biting comment on the decade that was, each one a singular achievement; if you want to get a caustic outsider-inside perspective on the late USSR and post-communist Russia so far, you'll have to study his works: for there aren't many other AV-sources that'll prove as rich, intellectually demanding cum engaging, and above all entertaining as this deceivingly small œuvre.

Mišen’, now, a grimly hilarious, eerily serene and all-out Russo-postmodernist Science Fiction-variation on Tolstoj's romantic leviathan Anna Karenina, was Berlin '11's stand-out work—undisputed, no competition around. And how could there? For Mišen’ is an exemplary essay in grandeur and refinement of a kind alien to this day and age. Zel’dovič 's main cinematic inspirations tell it all: Sergej Bondarčuk, Ivan Pyr'ev and Andrej Tarkovskij, to name but his svoj —his is a cinema that's consciously large-scale, created in defiance of bland blockbuster'dom as much as nowadays' tendency towards the humble and the demure. Save maybe for Terrence Malick, no one today makes films of similar intellectual breadth and emotional depth, comparable visual glory, directorial sweep—sings therewith a praise of what cinema can still be in all the years and decades to come.

(Speaking of competition: Mišen’ was not shown in the festival's official main section but hidden away in the Panorama. Unsurprisingly enough, Russia's place in the spotlight went to a co-production with the FRG, Aleksandr Mindadze's echt post-Soviet Zone Film V subbotu (Innocent Saturday), which we found far more intriguing than most people did back then back there.) 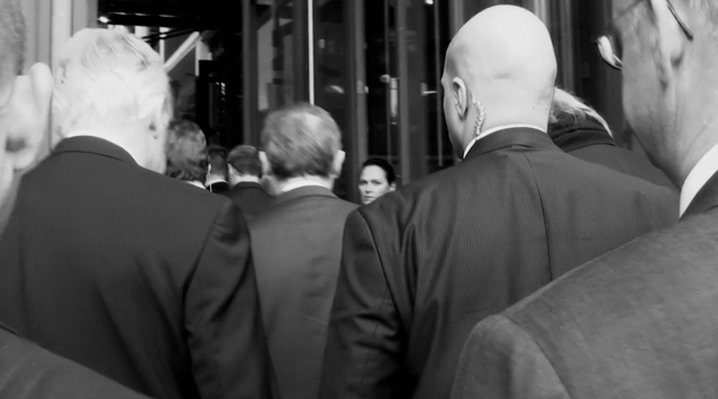 Half an hour with men of (self)importance demonstrating each other their discursive impotence while believing to talk deep. The place: Karlsruhe's ZKM. The protagonists: Horst Köhler, former head of the IMF and president of the FRG between 2004 and '10; Peter Weibel, Austrian avant-garde agitator/practitioner turned international media arts-Zampano; Peter Sloterdijk, a well-respected middle-brow philosopher who still has to come up with a thought-provoking notion or insight. Call it: Direct Kaschperltheater, Realguignol or La Punch and Judy show humaine.

(Some time later, during our ongoing research into the art and world of James Glickenhaus: 80s-auteur par excellence, we stumbled upon a perfect companion piece to Führung: http://www.bloomberg.com/video/69193718/. True, it's not a film, only a news item, but a most fascinating one: Glickenhaus et al. discuss essentially the same questions as Köhler et al., if in a completely different tone and certainly in a different frame of mind.  Yet, compare the moments when Köhler is presented some installation/performance piece about reality and representation with Glickenhaus' comments on the possibilities of building a Potemkin factory as well as his ruminations on the way the web warps our grasp on reality. Tragic thing: The Wall Street magnate talks about poor people, while the others, in the midst of a monstrous financial crisis...)

The Silver Donkey goes ex aequo to: Browninan Movement by Nanouk Leopold and to Das schlafende Mädchen (The Sleeping Girl) by Rainer Kirberg

These two drifted towards each other over the months since—they were always on our minds as Silver Donkey-contenders but it took us some time to understand that they wanted to share the award. Well, opposites attract each other. For in their respective fabric, these two couldn't be more different: Brownian Movement is a supreme example of Euro Arthouse-cinema that dares like few others do, a celebration of color coordination and cinema-scope splendor as well as a high mess of restrained acting—while Das schlafende Mädchen is a media arts project that took the form of a B&W-underground feature with some improv-spunk.

What got (to) us in both cases are the women, their refusal to play along. Charlotte of Brownian Movement creates a whole sphere for investigating her sexuality by enjoying malehood's extremes: Back home she's got a strapping hunk, while in a discrete apartment she opens herself to the pleasures of huge guys, hairy guys, old guys...; Ruth of Das schlafende Mädchen, again, is first but a screen made of flesh for two art students in early 70s Düsseldorf onto which they vainly project their desires—until she changes and becomes the woman they were always afraid of. Nothing, really, has substantially changed in the last 40 years or so, at least judging by the way too many people reacted towards Brownian Movement: violently angry—i.e. same way as Das schlafende Mädchen's art school boys to Ruth's metamorphosis from lost tramp to scene vamp.