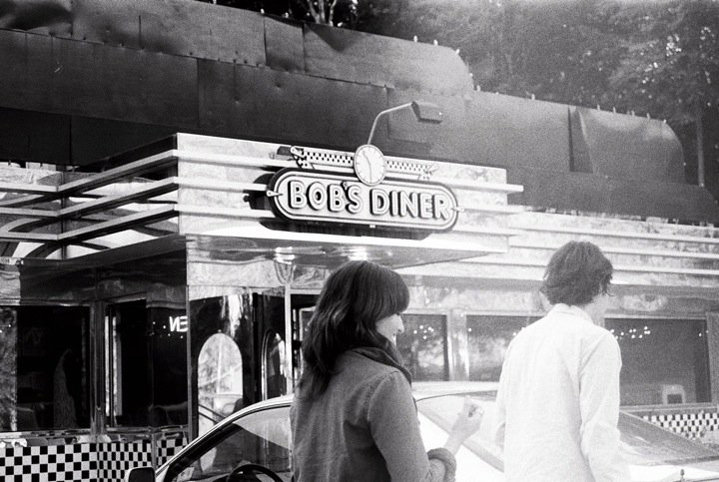 The Color Wheel is 83 minutes long. About 9 minutes and 40 seconds of those 83 minutes (i.e. roughly 1/9th) are taken up by a single shot, handheld, in which the cameraman (Sean Price Williams) only moves a few feet, but the characters of Colin (co-writer / editor / director Alex Ross Perry) and J.R. (co-writer Carlen Altman), seated on a couch, complete several transformations and a journey inward, piling on dialogue while stripping away their established personas. As a feat of form, performance and screenwriting, it's a fairly obvious showstopper—a great big narrative pirouette, grand jeté and cartwheel rolled into one, which betrays absolutely nothing that the film has (seemingly haphazardly, though actually carefully) established about the characters beforehand, and which accomplishes more in its 9 minutes and 40 seconds than most movies manage nowadays to do in their whole running times. That is: what's distinctive about the shot is not its duration, but its compactness; in a mere 9 minutes and 40 seconds it manages to convincingly establish, explore and then destroy the emotional lives of two characters who've up until this point been chiefly defined by their superficiality and callousness.

The Color Wheel constructs a world where pretty much everyone is equally petty, bigoted and mean-spirited; it then proceeds to sympathize with those who are petty, bigoted and mean-spirited out of vulnerability rather than class or upbringing. It takes some goddamn nerve to approach an essentially humanist premise through the trappings of ink-black misanthropy, and to align not with the few good people who might (theoretically) exist in this bleak world, but with two characters who are fascinatingly repulsive idiot-failures. Colin and J.R., brother and sister, indulge in jokey racism, belittle each other (especially about matters of relationships and sex), lie, and generally hold everyone and each other in contempt; they're also the only two characters in The Color Wheel shown trying to protect or please anyone other than themselves, and even then in the most wrongheaded ways imaginable. In a world where every action is equally wrong, rationale counts for everything—and though they're by no means "good people," and in every way as bad as the snobs and fakes they spend most of the movie interacting with, the siblings are, at the very least, pathetic.

The Color Wheel seems to have been made on a dare: make a sympathetic film about two ugly people who do ugly things while never betraying their ugliness. Colin is a compulsive douchebag whose stable focus-group job allows him to avoid being labelled as a "stuggling writer;" J.R. is an aspiring "broadcast journalist" with no apparent talent for either broadcasting or journalism. Neither has been wronged, neither's especially smart (Colin's idea of wit involves a "fake racist" shtick; J.R., it's revealed, didn't learn to read until she was 10), and both are chiefly attracted to people who look down on them (this extends to historical figures; despite showing no religious convictions, J.R. admits to having a crush on Moses). And yet despite (or maybe because of?) its detours into broad comedy, The Color Wheel manages to invest both characters with vulnerability, depth and even a perverse dignity; it's better at being a drama than most dramas.

The Color Wheel is Perry's second feature (after Impolex), and though there are sharp differences between the two—aesthetics, dialogue, degrees of "realism"—there's a consistent style that's emerging: an unwinking-but-conscious, devil-may-care Moulletian shoddiness (early in The Color Wheel, a bit player audibly flubs a line); a willingness to not only embrace genre, but sometimes several genres at once; a deep love of goofy slapstick and the dramatic possibilities of dialogue presented in a long take (Impolex also features a nine-minute shot, and a close-up of one character's talking face to boot); a mixture of the anachronistic (like Impolex, The Color Wheel was shot on 16mm—though unlike Impolex, it's in black-and-white and widescreen) and the anarchic; and a push-pull of smart and dumb (Impolex, for one, is an intentionally slapdash war movie that is both a tribute to Gravity's Rainbow and a parody of Malick's The Thin Red Line). And, above all, there's a vision of comedy as psychodrama (late Jerry Lewis being an acknowledged influence, the specific point of reference for The Color Wheel seems to be the manic depression of Cracking Up). 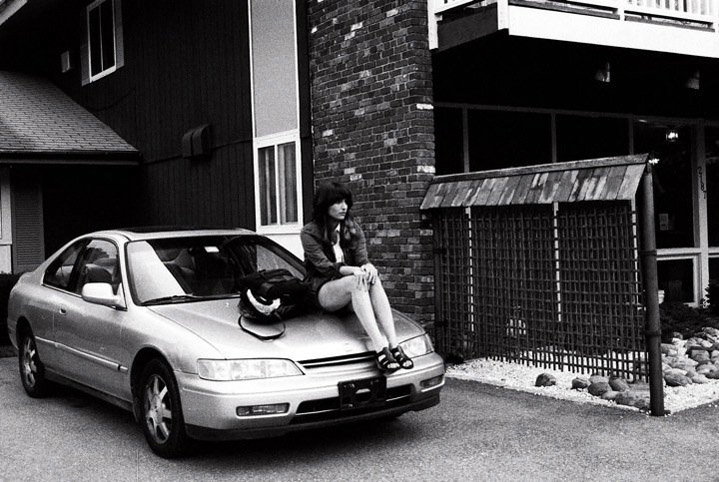 Other than saying that it's "definitely comedy," Perry's work is difficult to categorize (however, even that might be just one aspect; Perry is currently working on his next film, an omnibus contribution: a De Palma-influenced "erotic thriller"). For one, it never sticks to any particular kind of comedy for very long; Perry seems to like too many different varieties of humor to stick with one for a whole feature or even a whole scene. For another, it tempers aggression with sensitivity. The characters, who are maybe too articulate for their own good, spew out big chunks of rapid-fire dialogue calculated to hurt as many people around them as possible, and which inadvertently reveals all of their prejudices and insecurities.

Of all the American films that have premiered so far this year, The Color Wheel—a film where a character wears a "Who Farted?" t-shirt while reading a Bible, where pratfalls are common, where an upper-class soiree is represented by a bunch of twentysomethings wearing blazers in summer, where very cheap jabs are taken at fundamentalists and polio—travels into the most difficult emotional territory. And it approaches so-called "serious subjects" without a disingenuous patina of "seriousness;" that climactic 9 minutes and 40 seconds, after all, is followed by a punchline. Said punchline is funny, but it's also discomforting and sad—a moment of total emotional nakedness.  Underneath Impolex's sleepy humor lay a sad, romantic dreamworld; The Color Wheel's high-strung antics nearly mask the fact that the film—despite being, through and through, a screwy, weird, neurotic comedy, and a damn good one at that—is in many ways a tragedy.

Specifically, it's a tragedy that doesn't fault its characters for their hubris (small as it might be) and private downfall; the end result of the road trip undertaken by Colin and J.R. is not some cautionary tale. Tangling with a few very well-established taboos, The Color Wheel paradoxically creates its own ballsy moral system—one in which assholes can be redeemed without ever ceasing to be assholes or even making any attempts at self-redemption, and where a private shame is understood on its own terms. It's a sort of salvation without penitence, a salvation-through-form—a notion that's idealistically cinephilic: as the on-screen action becomes more and more alienating, the film gets closer and closer to Colin and J.R., devoting its longest, sincerest take and its most nuanced piece of acting to what's probably (hopefully) their biggest fuck-up. Like Impolex's nine-minute close-up, which completely recontextualizes all the movie's silly business in emotional terms, the climax of The Color Wheel is the moment where Perry reveals his hand for the first time: where all of these jokes have been headed, and why.

To pull this off, Perry has to bet everything on a structure that isn't visible right away but becomes obvious following the climax. With apparent loopy joy, The Color Wheel spends the preceding 70 or so minutes switching genres, veering from bile-spewing social farce to non-sequitur Surrealism (something it occasionally does within the space of one scene, and—in the case of the wheelchair-bound partygoer played by C. Mason Wells—one character)—and even that joy is motivated by the same drive as its empathy for Colin & J.R.: the jokes and tragedy are one and the same. This could be construed as nihilist, anarchist or moralist. That it's often difficult to tell which of those three describes Perry's work here more accurately isn't a product of some duplicity on his part; rather, it hints at its complexity and uncategorizable originality. Schooled in film history but not beholden to it, treating style as expression rather than a given, taking its ambitions seriously, willing to explore unexplored or marginalized territory: the cinema of the future, I hope.

The Color Wheel has its New York premiere at 7 pm on June 19th as part of BAMcinemaFest.